The 2019 Copa America is the 46th edition of the men’s international association football championship organized by CONMEBOL.

This year’s edition is being held in Brazil with stadiums in Rio de Janeiro, Belo Horizonte, Sao Paulo, Salvador, and Porto Alegre all given hosting duties.

Twelve teams from two federations will participate for the title, with the tournament starting 14 June and running through 7 July, with the knockout stage beginning 27 June. 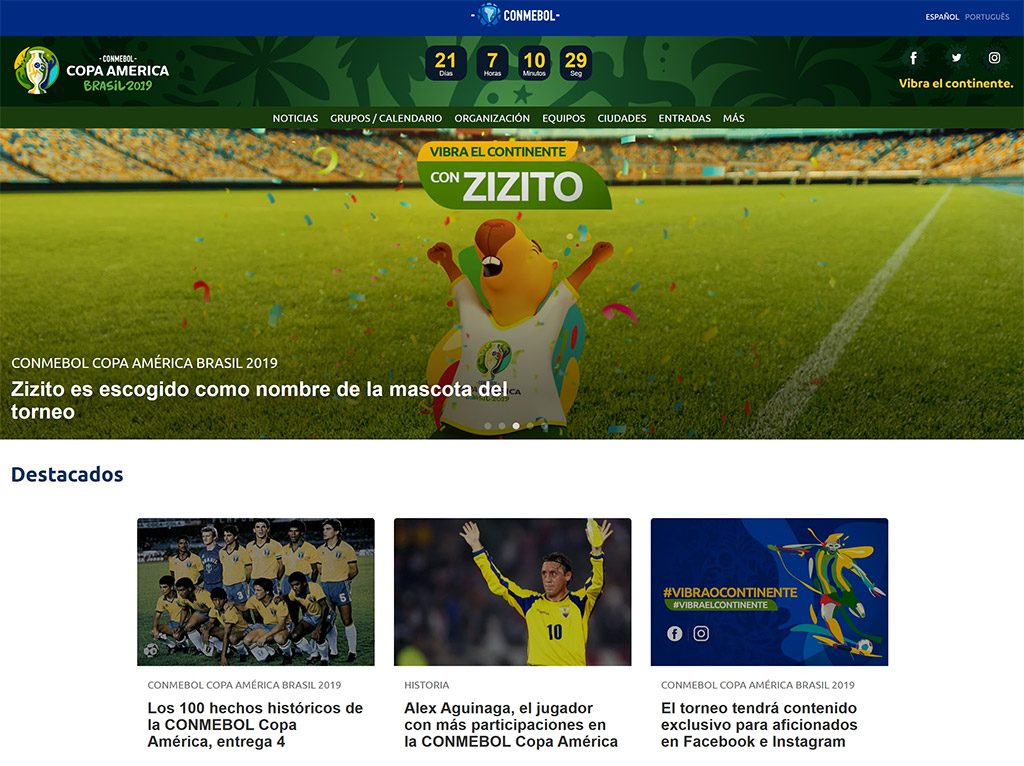 Cord cutters can choose from several streaming services, which include ESPN, beIN Sports, NBCSN, and Fox Sports, allowing you to watch the Copa America tournament from anywhere.

With packages starting at $49.99 per month, the least expensive package includes ESPN. New subscribers receive a 7-day free trial, and there is no contract required.

Includes all the major TV networks including ESPN, in their basic package, which costs $44.99 and includes a free 7-day trial.

Specializes in sports networks and includes channels such as beIN Sports and Universo, often absent from other basic packages. The service also offers both English and Spanish sports networks in the channel line-up.

Sling TV is the least expensive among streaming options. You can choose either the Blue or Orange package, both of which offer ESPN for only $15 per month for the first three months.

Offers a wide range of live television channels including ESPN, Fox Sports, NBCSN, and Telemundo allowing you to watch the Copa America matches in English, Spanish or Portuguese. Plans start at $44.99.

Here’s How to Watch the Copa America through a streaming service:

How to Watch the Copa America Outside the US

Beyond US broadcasting channels you can also watch the matches through local country networks.

ExpressVPN has some of the fastest connection speeds of any VPN we have tested. They optimize your connection and do not limit bandwidth allowing you to watch all the matches without throttling or buffering.

The service also provides a secure connection through military-grade encryption and safety protocols, including an auto kill switch and split tunneling.

You can simultaneously connect on up to five devices.

NordVPN offers the most extensive server network with 1,753 US servers and over 660 servers in the UK.

The company does not keep logs and protects your data through an Open VPN and DNS leak protection. The service includes ad blocking technology with every connection.

New subscribers receive a 45-day satisfaction guarantee. The company does not keep activity logs and protects your data will 256-bit AES encryption.

Unblock streaming services from anywhere in the world without bandwidth restrictions.

Copa America includes 12 of the best teams in the world, arranged in three groups of four. The tournament includes 10 CONMEBOL teams and two AFC guests.

In 2019, the guest teams are Qatar and Japan. At the end of the initial rounds of play, the top two from each group will advance to the semi-finals, along with the two best third-place teams.

Stations like ESPN purchase broadcasting rights, which allow the station to show programs within a designated region.

For example, ESPN bought the rights to show the Copa America games in the US in English and Portuguese. Due to these geolocation restrictions, to watch Copa America on a US ESPN channel, you must be in the US.

A VPN will disguise your location, allowing you to watch programming from outside the US through a US server.

The Best VPNs to Watch the 2019 Copa America

Live sporting events require faster streaming speeds than general browsing. Choose a VPN with fast and safe connections and a host of servers in the US or the UK.

You can enjoy every minute of live Copa America action from anywhere in the world with the fast connection speeds of one of our recommended VPNs.