I’m a father to 5 kids, four of which have phones and tablets and range in age from 4 to 16. Instead of worrying about what they are doing on their phones all day, I decided to find out. I tested over 50 parental control programs and was surprised how many of them had little to no value on iPhones and iPad.

I was only able to find a few parental control apps for iOS that worked well. In the list below you’ll find the top 5 apps that made the cut and performed the best in my tests.

Quick Guide: Rundown of the Best Parental Control Apps for iOS in 2020

Monitor Your Kids Devices with Qustodio!

5 Best Parental Control Apps for iPhone and iPad in 2020 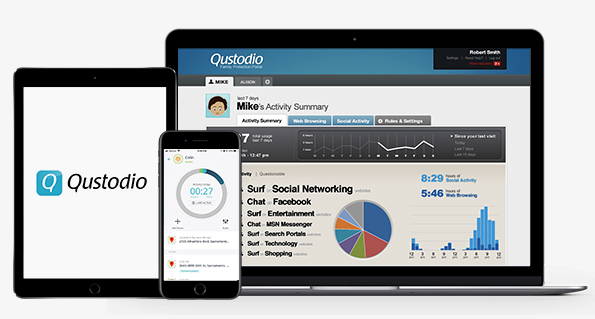 Qustodio was able to succeed in monitoring my kid’s iPhone where most other monitoring apps failed. For starters, the web filter is compatible with Safari (and Chrome). It also gives me the flexibility to choose the sensitivity of the filter, based on the kid’s ages, instead of having a default filter for the whole family.

When I was testing Qustodio, I liked the time management tools which gave the option of setting a daily time limit and setting up a daily calendar of when the devices are locked. The one problem I have with the calendar option is that you can only block time in segments of 1-hour chunks, which doesn’t fit with the schedule in our house.

There are 2 different options for locking iOS devices:

I was really happy that Qustodio works on multiple platforms so I was able to access the parent dashboard from my Android phone and PC and monitor the iPhone and iPad in the house. The dashboard is user-friendly and makes it quickly see all the family activities and alerts at a glance.

Qustodio has 3 subscription plans that not only includes all of the features but also has a 30-day money-back guarantee. I tested the money-back guarantee and received a full refund after using it for just under a month. I found a great price on this hidden deals page and got the “Small Plan” which works on up to 5 devices. 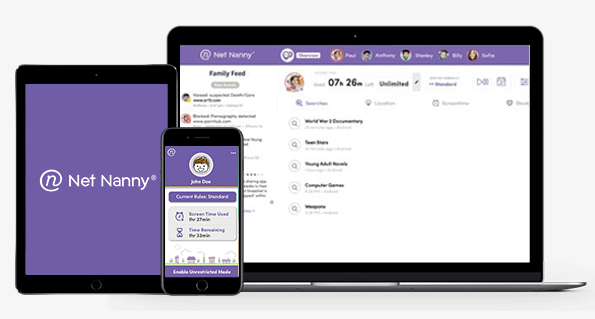 Net Nanny is one of the top parental control programs I tested for iPhones and iPads. It made managing the amount of screen time for my kids really easy. It has two options, setting up a daily limit or a schedule, which breaks the day up into 15-minute segments. There is no option to put a time limit on each app, due to Apple’s guidelines.

The web filter, which works with Safari, has 15 customizable categories. Not only that, but I was also able to create my own filters by adding words or phrases that I wanted Net Nanny to detect and alert me when used. There is also the option to allow or block specific websites or apps, which can be helpful if you want to prevent your kids from using them, even if it wouldn’t be blocked by the general filter.

The Net Nanny parent app, which I was able to download on my Android phone and monitor my child’s iOS devices, has a Family Feed which gives real-time updates on activities from all the kids. This made it easy for me to see what apps they’re using, or what they’re searching on Google, and whether they triggered any alerts.

The YouTube Monitoring feature needs to be improved for it to have any real value. A lot of the videos that my kids watched on the iPad didn’t show up on the Family Feed timeline. However, It enforces YouTube parental controls, which blocks inappropriate searches and videos.

I got the Net Nanny plan that includes 5 devices so I could test it out on several devices and took advantage of this great offer that includes a 14-day money-back guarantee. 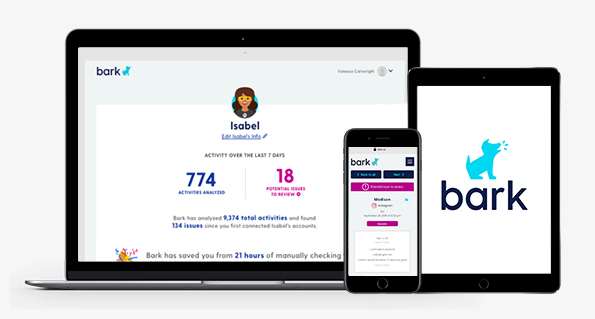 With a recent update that added a web filter and screen time management for iPhones and iPads, Bark quickly became one of my favorite parental control apps.

The main focus of the app is still monitoring social media networks. I was able to connect Bark with over 30 social media apps on iOS and it scans all the content, and sends alerts when it finds posts, messages, comments, or videos that deal with sex, drugs, violence, alcohol, weapons, suicide, and more.

Unlike Bark for Android, the iOS app can’t fully monitor some of the apps. For example, while it can monitor videos and pictures on Instagram, it can’t access DMs and searches.

Bark found a unique way to get around Apple’s strict monitoring guidelines. The app records everything that your child does on their iOS device, and then, every 6 hours it will upload a backup to the Bark for Windows or Bark for Mac app, as long as you’re on the same wifi network. Once the upload is complete, Bark scans the day’s data and sends an alert or warning if it detects anything that it deems inappropriate. While you don’t get the information in real-time, I still thought it was a good workaround.

Bark has two plans, one only has the monitoring and time management features, and the other is all-inclusive. I found a great deal when I tested Bark by accessing its hidden deals page and got a great price for the all-inclusive package, which came with a 7-day no questions asked money-back guarantee. 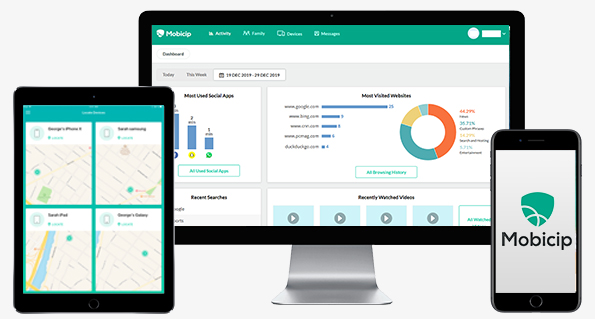 When I was testing Mobicip I saw that most of its premium features worked with iOS. I customized the web filter and it worked with Safari. I was also able to decide which apps to restrict, blacklist any websites or search terms, and choose which social media networks to allow.

In order for all the features to work, I had to agree to let Mobicip install an MDM (mobile device management) although on the installation page it’s referred to as an EDM. which allowed it to fully monitor the iPhone.

One thing I didn’t like while I was testing Mobicip was the lack of flexibility in the time management features. There is no daily limit per child, just a schedule, which is made up of hour-long segments, or the option to block all family devices at once.

The dashboard, which can be accessed from any device, is probably one of my favorite things about Mobicip. Everything displayed in an easy to read manner, with graphs and charts showing me what the kids are doing online and if there is anything for me to be concerned about.

Mobicip is a great option for iOS devices if you’re looking for a strong web filter. I found a special deal on their website and it also comes with a 14-day money-back guarantee.

5. Kaspersky Safe Kids – Requires You to Use Safe Kids Browser 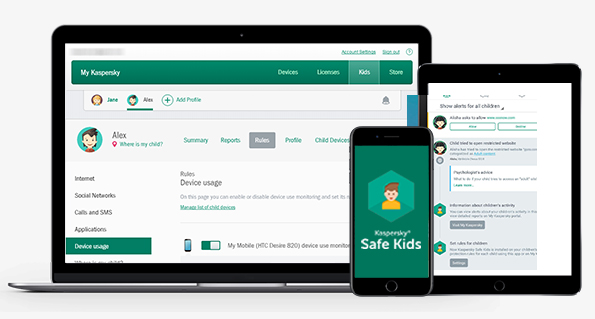 I found that Kaspersky Safe Kids was really limited when it came to monitoring iOS devices. Some of this is due to the fact that Apple limits monitoring on iOS devices. However, other apps on my list were able to work within the iOS guidelines and still act as an effective tool.

Safe Kids still has a strong web filter, but you can’t use Safari. Instead, I had to instruct my kids to use the Safe Kids browser. They didn’t report any issues with the browser, which has a sleek design, with a tabbed interface and didn’t seem any slower than Safari, Chrome, or Firefox.

I wasn’t impressed by the time management tools. When the kids reached their daily limit it couldn’t block the device, and while I was able to restrict specific apps — I wasn’t able to block an entire category of apps, like Games or Streaming.

If your main goal is a strong web filter, then Safe Kids is a good choice, especially with prices that are tough to beat. If you aren’t totally sure whether Safe Kids will give you enough parental control over the kids’ iOS device you can try it free for 7-days without using a credit card to register.

Get the Safe Kids Web Filter for iOS

I’ve tested more than 50 parental control apps, and have very high standards when it comes to keeping my kids safe online.

Here’s what I require from a parental control app before I’ll recommend it:

💰Are there free parental control apps for iOS?

While there are free parental control apps, I wouldn’t recommend using them. For the most part, these apps just advertise a free app, but only give you very basic monitoring tools for free. If you want the full version, you’ll have to pay anyways. If I saw a fully free program with no premium package, I had to ask myself why a company would offer their service for free. The answer was usually either they shared the data they collected or had ads that would show up on the parent app, which I found really annoying.

🖥Why did Apple place restrictions on parental control apps?

According to Apple, they were protecting the privacy of its users from intrusive apps. Before the new regulations, the top parental control programs used mobile device management (MDM) applications that gave control of your data to a third party. Apple saw this as a breach of privacy and therefore made companies either remove or make adjustments to the MDM.

However, there is speculation that Apple was just getting rid of the competition so people would have to use its built-in parental controls.

For all its greatness, Apple isn’t in the parental control business. Sure, they have some basic time management tools, but it’s nothing when compared to Qustodio or other leading parental control programs.

I think there is a big distinction between spying and monitoring your children. As parents, it’s our job to protect our children which has become even more difficult once they have unlimited access to the internet 24/7. They are susceptible to cyberbullying, can learn about sex, drugs, alcohol, weapons, and pretty much anything else in an uncontrolled environment.

There are spying apps, which can be downloaded to a child’s iPhone or iPad without their knowledge through iCloud and monitor everything that happens on the phone. I wouldn’t be comfortable using this spy tech unless I felt that my children were in danger or could become a danger to him or herself.

No one knows your kids quite like their phones. They use it to search for information, talk with their friends, play games, join groups and more. This can be very scary for most parents, no matter how close your relationship is with your children.

And it’s a good idea to be open with your kids about why you’re putting a parental control device on their iPhone and iPads. This can increase communication and let them know that you aren’t spying on them, but looking after them.

The best parental control app I tested is Qustodio. I found a great price on this special page and it comes with a 30-day money-back guarantee. This is perfect if you want to try it out and see how it works with your family. I tested their refund policy and got a refund with no questions asked.

Written By Shauli Zacks
Shauli is an online privacy expert with a love of all things technology. He spent the past few years testing, comparing, and reviewing different software programs.
This Article contains
Latest articles
Follow our experts