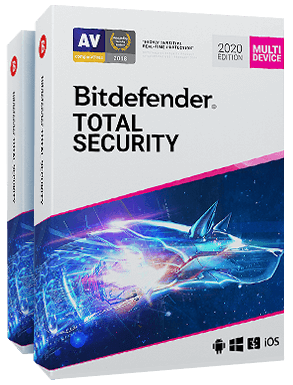 With half billion users worldwide, you’d expect Bitdefender to be one of the best antivirus services out there. I have to admit, I was impressed with the performance of both its free and paid plans — but I was also disappointed.

In multiple rounds of testing, Bitdefender achieved a perfect malware detection and removal rate. There are plenty of extra features to like as well, such as parental controls, webcam and microphone blocking, a firewall, and password manager. However, Bitdefender doesn’t quite measure up to the antivirus package offered by Norton. Out of Bitdefender’s 4 paid plans, half are designed for Windows only. When I tested the free version, I found it to be a very simple antivirus with no ransomware protection or even customer support.

Despite these minor limitations, Bitdefender is still one of the best antivirus programs in 2021. Unlike many antivirus competitors, you can try Bitdefender with a 30-day free trial (no credit card required)! You can keep using Bitdefender afterwards with the 30-day money-back guarantee. I tested it myself and easily got my money back in only 5 days.

There’s no doubt about it — Bitdefender is one of the best programs available to protect you from malware and viruses. No matter which plan you choose, you’ll be protected by its core antivirus software. Even the free plan will detect existing cyberthreats, although you’re not getting the same level of advanced security as paying customers.

My team and I set up a Windows testing machine and purposefully downloaded malware and viruses. Bitdefender detected 100% of malware — it even caught threats that were discovered only 4 weeks prior to tests! While Bitdefender did flag 7 harmless files as dangerous, I was still pleasantly surprised by this result. This is less than half of what other antivirus brands I’ve tested typically find.

When it comes to Mac protection, Bitdefender detected all malicious files in my tests. A colleague reported similar results (it only missed 1 file on her device). Results like this put Bitdefender on par with top-ranking competitor Norton 360 in all tests.

Bitdefender offers a variety of scans to keep you safe: 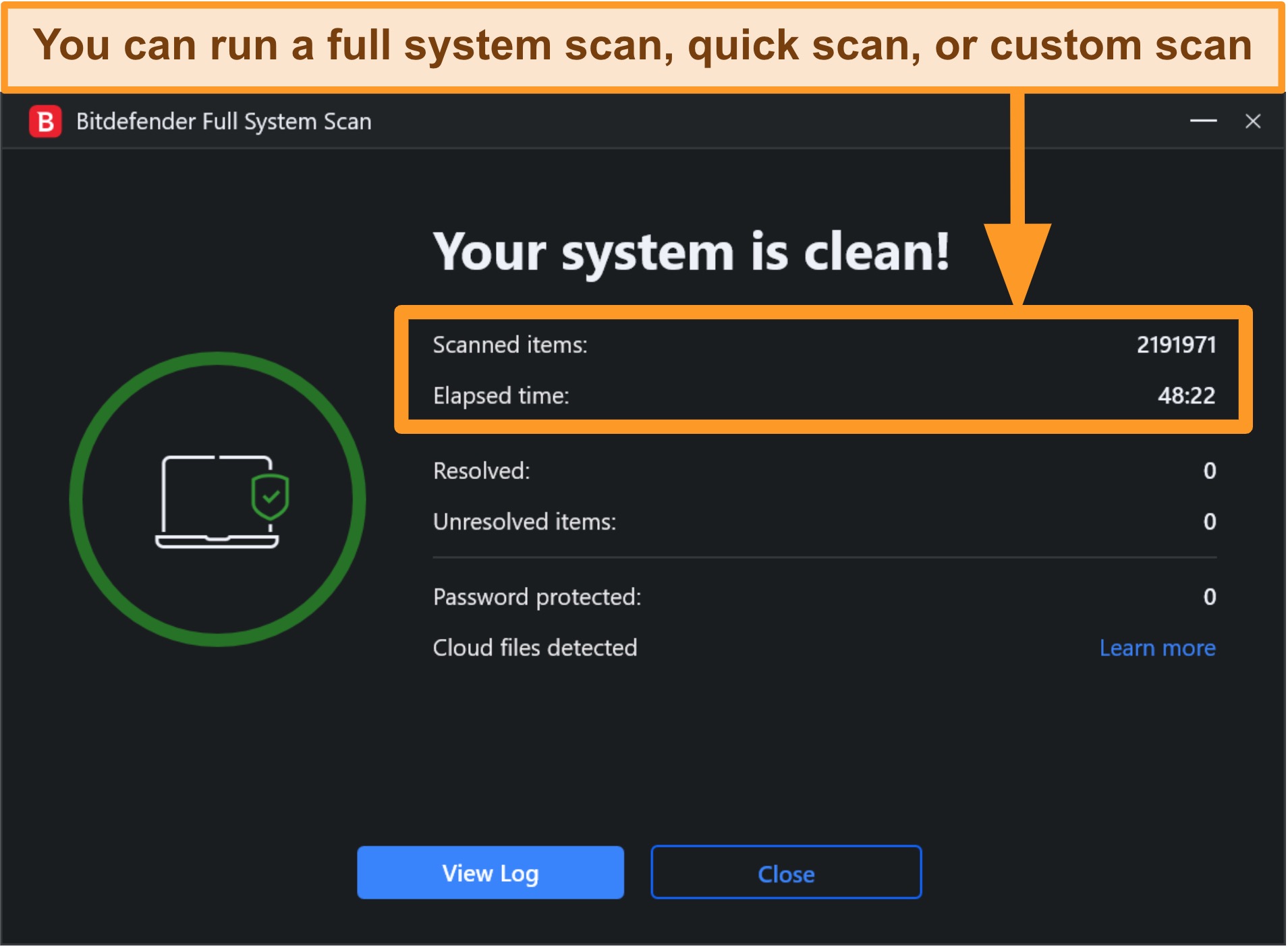 It’s important to make sure your antivirus can remove malicious software after infection — but it’s even better to prevent infection in the first place.

Bitdefender detected 99.7% of real-time threats, which is a near-perfect detection rate. Not many antivirus competitors can achieve such a strong score. In fact, there’s only a few on the market that do better (like Norton 360, which achieved 100% in the same tests). For this test, I opened a series of emails and websites with confirmed malware infections on a PC. I was pleased that it found 0 false positives (harmless files that are flagged as dangerous).

Depending on the threat’s source (file download or website), Bitdefender will either warn you with a notification or directly in the browser window. It then decides to block or quarantine the file, although you can override this decision if you feel safe doing so. 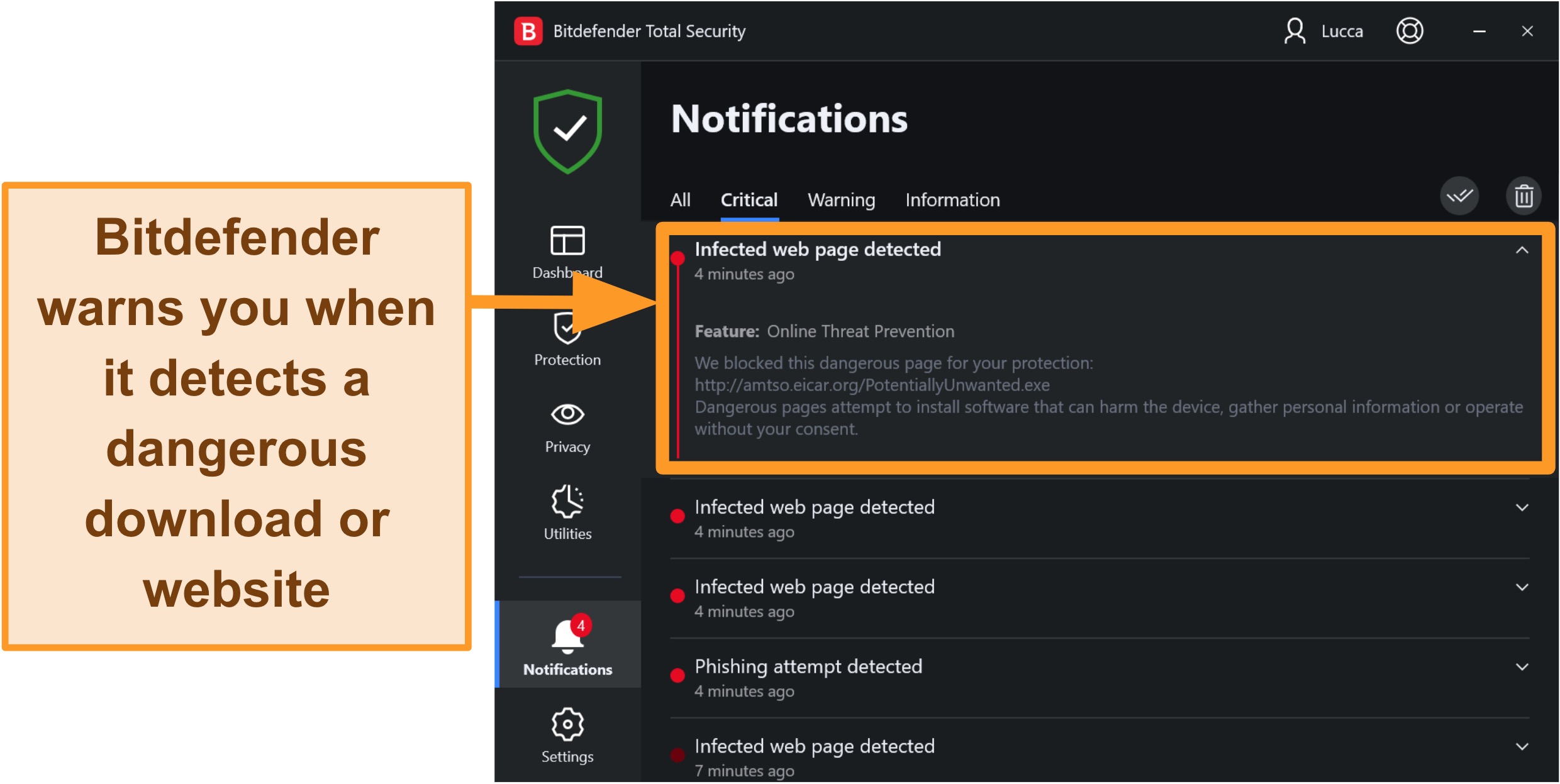 Phishing attacks occur when hackers trick you into entering your login credentials, financial details, or other personal information in legitimate-looking websites or emails. Bitdefender scored a high 94% detection rate during phishing tests, helping it eliminate the vast majority of brand-new threats before they can cause problems.

Bitdefender protects you against phishing with several tools including:

Ransomware occurs when a hacker encrypts all or some of your hard drive and makes you pay a ransom to decrypt it. Worse yet, you might not be able to recover your precious files even if you pay a hefty fee.

Bitdefender prevents ransomware attacks with its Behavior Monitor tool, which prevents malware from altering your files. As a backup, it also recognizes your essential files and copies them to a secure location. That means that if you’re the victim of a ransomware attack, you can easily recover these documents. Even if you don’t have a backup, you can use Bitdefender’s Ransomware Remediation tool to attempt to decrypt your data without paying the bounty.

This protection won’t interfere with other programs. You can add applications as exceptions, so Bitdefender never interferes with their file-modification abilities.

In my tests, I closely compared Bitdefender’s performance with top antivirus services like Norton 360. I was surprised it had about the same tiny effect as Norton on app launch and file transfer speeds. It slowed my computer a bit more when opening web pages (17% vs. Norton’s 9%), but the difference was practically unnoticeable. An extra few seconds doesn’t bother me as long as there’s no lag or freezing — something I never experienced with Bitdefender.

While running a full system scan, my CPU usage increased from 2% to 9%. However, there was no noticeable impact on device performance.

Bitdefender has several additional security extras that beat the offerings of most other antivirus suites. It has unique extras (including File Shredder, SafePay, and many others) that I’ve rarely seen in other programs. However, a few of its other tools (like the VPN) didn’t quite meet my expectations.

Firewall — Easy to Use With Numerous Options for Advanced Users

Bitdefender’s firewall adds an additional security layer by preventing malicious software from connecting to the internet. This protection also stops cybercriminals from connecting to you. The firewall analyzes the applications you have installed and configures itself based on the network type you’ve chosen (dynamic, home/office, or public). You can also customize rules to control how you want certain apps to access the internet.

Another handy firewall feature is Alert Mode, which notifies you when an app attempts to go online. Similarly, Stealth Mode hides you from other devices sharing the same network. I was pleased that this feature helps you stay hidden from prying eyes even on public WiFi.

I found the firewall’s security configurations to be really helpful, so it’s a shame they’re only available with the Bitdefender Internet Security and Total Security packages.

Antispam — Blocks Spam but Only on Some Email Platforms

Spam often puts you at risk for phishing. However, even when it’s not a targeted attack, junk mail is a real nuisance and can prevent you from seeing important messages.

Bitdefender’s Antispam feature conveniently connects to Outlook or Thunderbird and filters out junk mail. You can add emails of known contacts who should never be filtered or tag spam emails that you know are dangerous. You can even submit spam samples or legitimate emails to train the Antispam feature to better recognize junk mail.

Since I use Outlook at work, I thought this feature was helpful. However, if you prefer other email services this feature won’t be useful since it doesn’t support most platforms.

Cybercriminals are increasingly targeting video and audio to steal your data — even top government intelligence officials admit to putting tape over their webcams for extra privacy. Fortunately, Bitdefender offers software to block your webcam and microphone. It also informs you which programs attempt to access them. This feature reassured me that hackers couldn’t secretly watch or listen to me while using my computer.

Protect your webcam with Bitdefender

Password Manager — Fast and Simple to Use with Unlimited Storage

This is one of the best password managers I’ve tested. On every paid plan, Bitdefender can store your login details and autofill them on websites when needed. There’s no limit to the number of passwords either. Competitors like McAfee only allow you to store 15 passwords unless you pay extra money, which is nowhere near enough storage.

I’m especially pleased with how fast Bitdefender’s password autofill works on connected sites. I’ve tested multiple password managers and there’s sometimes a delay before it fills in my credentials. However, I tested over 15 websites and Bitdefender always added my login details in 1 second! 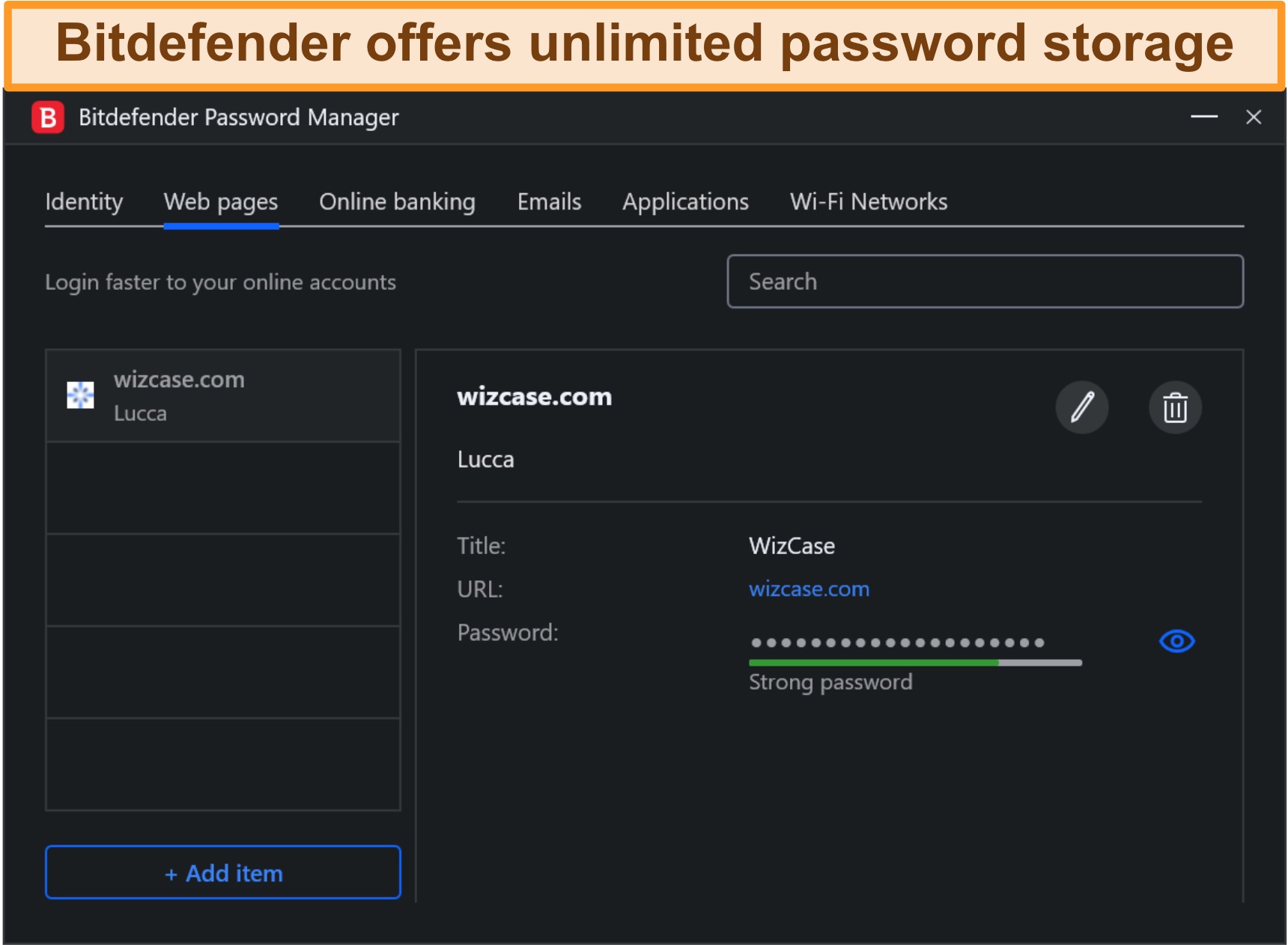 I like that Bitdefender comes with a VPN on every plan and it works on Windows, Android, Mac, and iOS devices. I strongly believe a VPN is essential for keeping your online browsing history private, unblocking restricted content, and hiding your real IP address.

Unless you subscribe to Bitdefender’s Premium plan, you’re restricted to just 200MB per day per device. This data allowance is so small that it’s basically useless. My data ran out in 30 seconds after I ran a single speed test! You also can’t select your own server location — the VPN automatically connects you to the location it deems best. While this isn’t great, it could also be worse. For instance, Avira’s free version of its Phantom VPN only offers 500MB for the entire month.

Bitdefender’s Premium VPN is decent but I’m not sure it’s worth the subscription upgrade. You’ll have unlimited data and access to servers in 27 countries, but you can’t unblock too many streaming platforms. I could only connect to Netflix (the US, UK, and German servers worked for me). I had zero luck with Disney+ or HBO Max. However, my speeds were fast enough to stream in 4K UltraHD and torrent large files. I watched the film Leave No Trace on Netflix with less than 5 seconds of buffering. 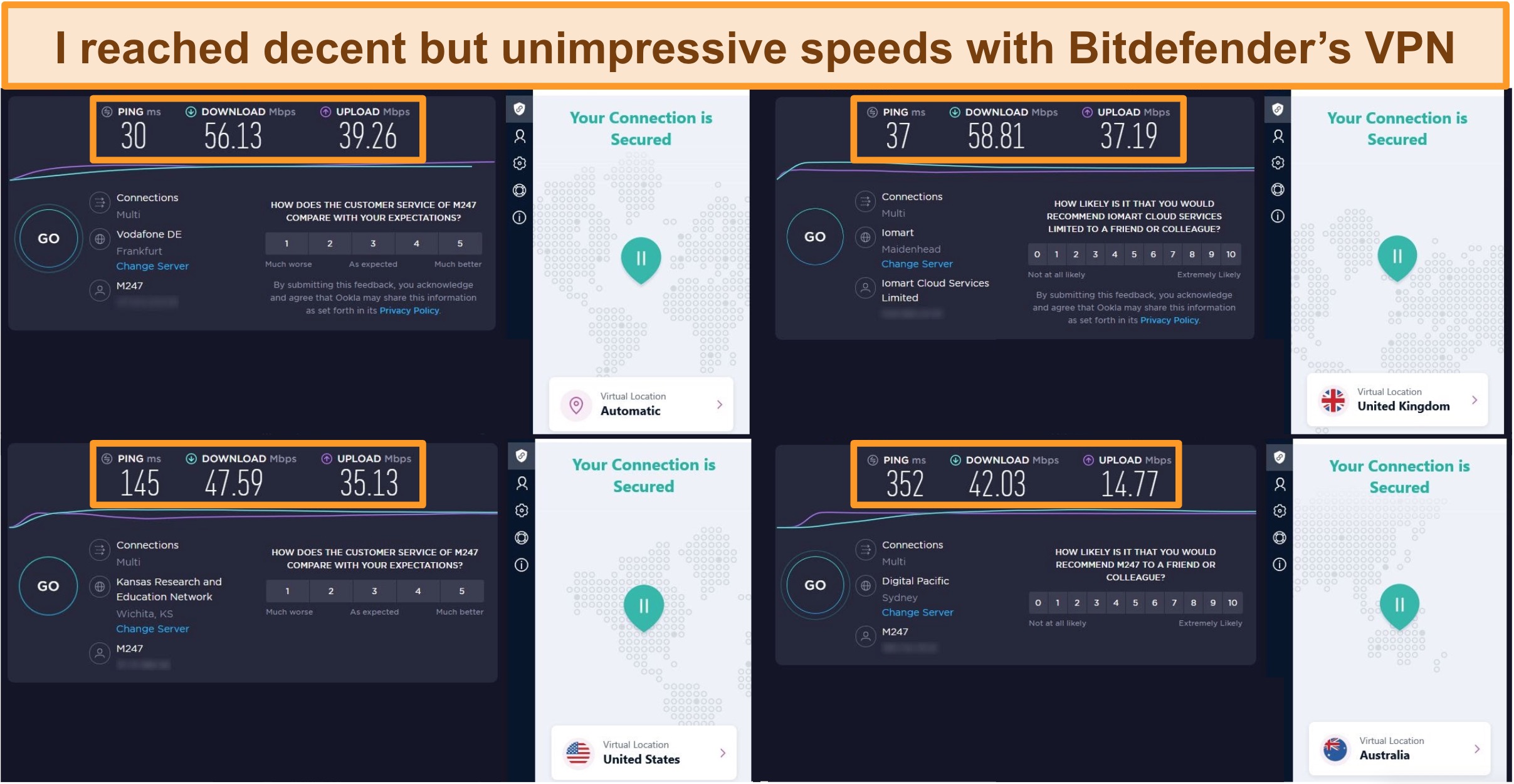 While Bitdefender’s VPN speeds aren’t extraordinary, you’ll be able to stream and browse without issues

In short, Bitdefender’s VPN is good if you haven’t got a VPN but it’s not the best option out there. If you’re looking for an antivirus with high-performing VPN included, Norton 360 offers a VPN with unlimited data on all plans except the basic plan.

If you’re anything like me, you hate being stalked by internet trackers. Advertisers use trackers to collect your private information, but it also slows down your browsing speeds. That’s why I was pleased that Bitdefender’s Anti-Tracker browser extension blocks trackers on Google Chrome, Mozilla Firefox, and Microsoft Edge. 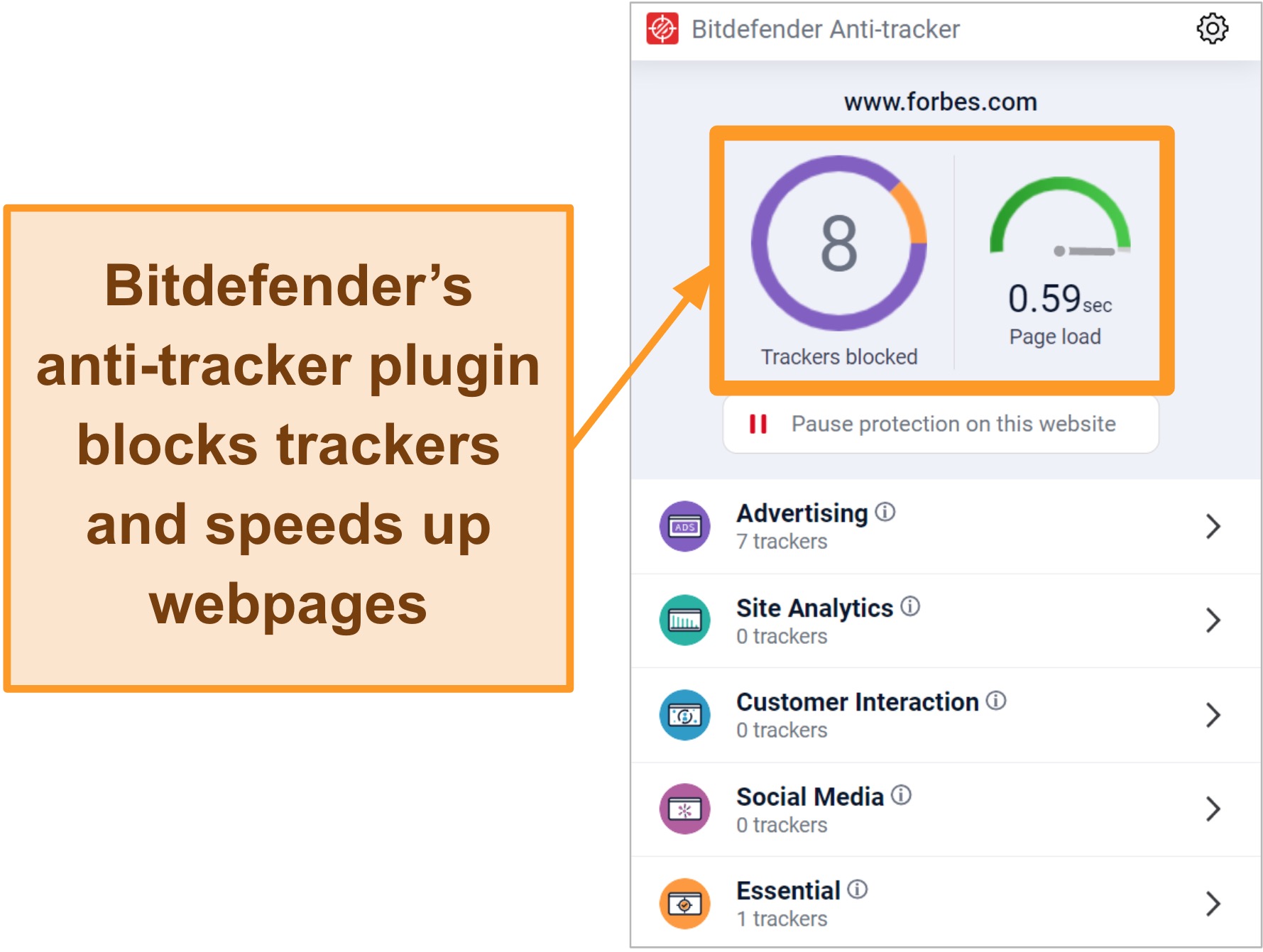 I compared this feature against the Electronic Frontier Foundation’s Privacy Badger plugin across multiple sites. I was pleased that Bitdefender’s plugin blocked more trackers than the competitor!

If you have sensitive files on your hard drive that you want to hide or destroy, it isn’t enough to simply delete them. These days, sophisticated software can recover files that you thought were gone for good.

Bitdefender’s File Shredder solves this issue by overwriting your files with new data multiple times instead of just deleting them. I tested it by shredding a 5GB video file, which took just over an hour to complete. This is the downside of this type of deletion — large files can take a long time to process. But besides physically destroying your hard drive, I found there’s no better way to erase something forever.

If you’re not ready to delete a sensitive file but want to keep it hidden, the Safe File feature acts like a vault for personal files. When you transfer a document to the Safe File folder, it can’t be accessed or altered without your knowledge.

SafePay — Bank and Shop With An Extra Layer of Security

Using banking or e-commerce sites on your regular browser could let cybercriminals steal your financial details. Keyloggers can swipe your username and password, attackers can take secret snapshots of your activity, and man-in-the-middle attacks can intercept data on shared or insecure connections.

When you launch Bitdefender SafePay, you open a completely different desktop environment with no links to your existing desktop. Its advanced security features prevent screenshotting, data interception, and keylogging. It also blocks suspicious websites and browser extensions from loading in the first place. This lets you do online banking or shop without worrying.

I’m a big fan of SafePay and recommend using it whenever you need to share sensitive personal data. It’s also automatically integrated with Bitdefender’s Password Wallet and VPN for added protection and ease-of-use.

You can use Bitdefender’s parental control tools to locate your children’s devices, track how they spend time online, and block websites or apps. This is useful for preventing access to adult content and temporarily shutting off access to social media or streaming platforms.