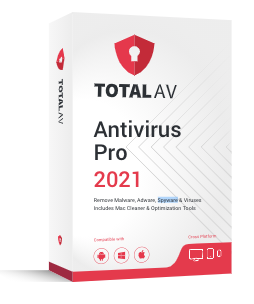 A relative newcomer to the market, TotalAV markets itself as a globally trusted antivirus. And, at first glance, its security features rival top brands like Norton and McAfee—at much lower prices. But does TotalAV actually perform like an industry-leading antivirus, and will it give you value for your money?

Being a firm believer in getting what you pay for, I wanted to check if TotalAV’s attractive prices really mean subpar performance. I put the program’s free and premium versions through exhaustive testing on Windows, Mac, Android and iOS devices.

TotalAV impressed me with superb malware detection rates and robust real-time protection. Both the paid and the free versions also surprised me with a tremendous host of features, which include a VPN from the well-known provider Windscribe, an ad blocker, a password vault, and a breach detector. This far exceeds what other premium antivirus competitors offer at higher price points.

The only catch is that the low price is only available for 1 year. And, the free version expires in only 7 days. That said, all of TotalAV’s paid plans offer a 30-day money-back guarantee — which I successfully tested — so you can try the antivirus risk-free!

During tests, my team and I performed a full scan on a test computer by downloading malware no older than 4 weeks. During the 22-minute procedure, TotalAV identified 100% of viruses, spyware, ransomware, and other forms of malware, which is the industry average. 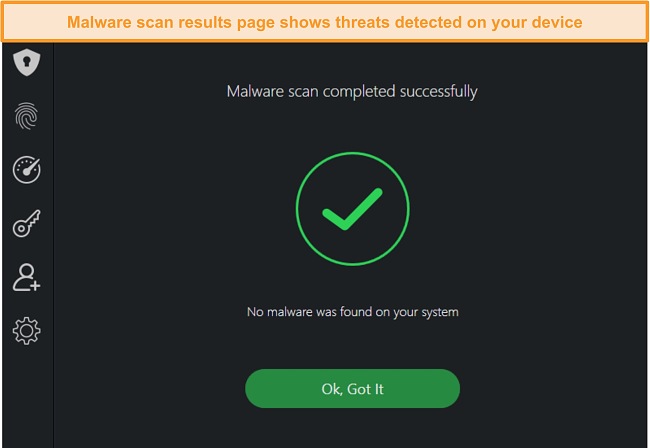 I also tested TotalAV’s Smart Scan – a basic check of files in the Desktop, Startup, Browser, Folders, Cookies, and Cache. The scan examined over 55,000 files, and while no malware was detected, it found several items for me to optimize on my device. These included:

Antivirus programs can slow down a device when they run in the background, so I paid particular attention to my computers’ system speeds as I tested TotalAV. I found that the slowdown was negligible and didn’t have any noticeable impact on my regular browsing.

However, I did experience minor delays when downloading and installing programs. Compared to its peers, TotalAV causes fewer system delays than most other antiviruses, except McAfee and Kaspersky. That said, TotalAV is still the better choice overall. Kaspersky’s alleged collusion with state powers got it banned from US government agencies, while McAfee lacks TotalAV’s range of features.

I also tracked how long each type of scan took and how many files it included during testing. The speeds were consistent between devices, and are similar to what Norton achieved in our testing.

Keep in mind that there are many variables affecting scanning speeds, such as file size, complexity of malware, age and type of hardware, and many more. So scanning speeds on your device can be vastly different than mine.

Real-Time Protection — Blocks 99% of All Cyberattacks

I needed to know how TotalAV performs in warding off real-time threats. So, I went back to the test computer, where TotalAV detected 99% of new malware discovered in the last 24 hours. That’s impressive for malware only just released for less than a day. Only Norton achieved a perfect score of 100% in the same tests, while the industry average is 97%.

I always prefer a thorough scan, even if it labels a few harmless files as ‘malware’. After all, missing a real threat is the more critical problem. My real-time testing of TotalAV revealed that 0.5% of identified threats were in fact legitimate files. Considering that competitors like Panda falsely flag twice as many harmless files, TotalAV’s result is not a cause for concern.

Before it’ll work in the browser extension, you must set up the WebShield through your desktop and smartphone app: 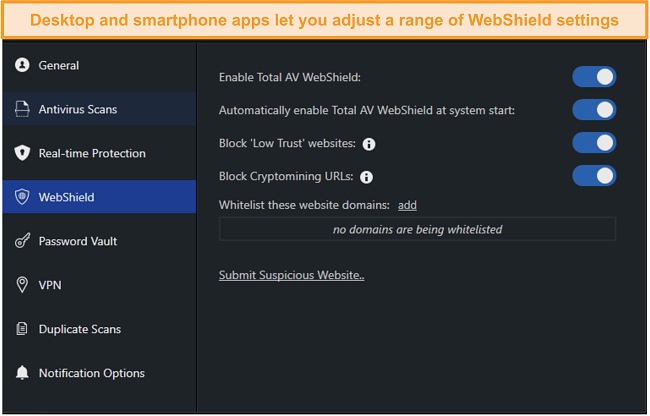 Once you’ve set up WebShield in the app, you can easily turn it on and off in your TotalAV Safe Site browser extension. I recommend you keep it on at all times to guard your browser and device against security and privacy threats.

As I tested WebShield, I tried to open known malicious sites with the feature on and it stopped me every single time. 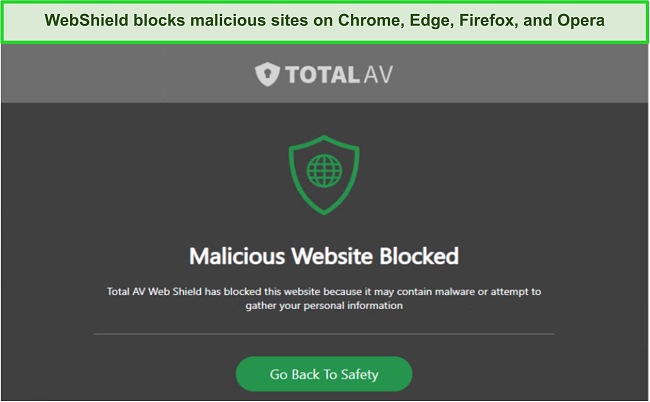 WebShield blocked every malicious site I tried to open

TotalAV’s Ad Block Pro is also accessible through the app and the Safe Site extension. The feature lets you manage which websites can show you ads, and which cannot.