Intego Review 2021: Is the Best Mac Antivirus Really Worth It? 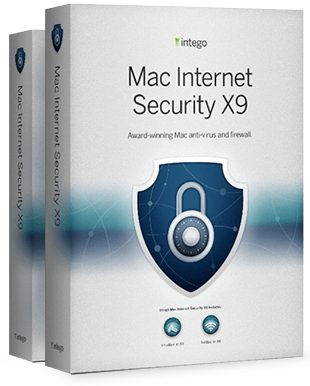 Intego is widely known as the leading Mac antivirus — but I was suspicious about whether Intego is actually any good and why it’s considered the best protection suite for Mac.

After testing dozens of antivirus products, I can confidently say that Intego is truly the #1 Mac antivirus for 2021. It’s specifically designed for Macs, so you can be sure it’ll protect you from dangerous macOS malware that other antivirus don’t focus on. Intego even improved my Mac’s performance by removing and organizing junk files.

While I found Intego is the best antivirus for Mac, it performs less well on Windows. It appears the company is investing all its effort into creating the best product for macOS users. For a proven Windows antivirus, I’d stick to Norton 360 or TotalAV.

If you’re a Mac owner and you want to stay protected from cybercrimes and online threats, you can try Intego for free for 30 days with the money-back guarantee. It’s easy and hassle-free to get a refund in case you change your mind (I tested it myself and got my money back in 10 days).

Try Intego for free for 30 days!

Intego’s malware protection for Mac is the best on the market and outperformed all other brands during testing. Intego blocked all threats in testing, including phishing attacks, viruses, spyware, and other types of malware. It even comes with bonus features like network and web browsing protection, which maximizes the security of your Mac.

In testing, Intego’s VirusBarrier detected 100% of over 300+ different malware. My team and I set up a testing computer and inserted new malicious files that were discovered in the last 4 weeks. Intego identified and quarantined every single threat. This really impressed me as other popular Mac AVs like Avira Antivirus Pro, F-Secure SAFE, and Fortinet FortiClient were not able to achieve a perfect score. In fact, the industry average is only 85%.

I was also glad to see that Intego did not have any false positives. Some antivirus software can be overly aggressive in its detection and may inaccurately identify normal files as harmful ones. However, Intego had no issue with this, which means you won’t need to waste time manually looking through the flagged files to see if they’re actually dangerous or not.

A great added bonus is that VirusBarrier is able to detect dormant Windows malware on Macs as well. Windows malware can’t do any damage on a Mac itself but can be used as a host to spread to other PCs in the same network. If you transfer files frequently between your Mac and a PC, this is a serious threat. By scanning and getting rid of Windows malware on your Mac, you’ll prevent these harmful files from ever reaching a system where it could do real damage.

Intego offers 2 scanning options: full scan and quick scan. The full scan will analyze every single file on your computer, while the quick scan only inspects the areas where malware is usually hidden. Doing a full scan is always ideal as soon as you install an antivirus, but after that, I recommend performing them once every 2 weeks. Because quick scans are a lot faster, you can schedule it to automatically run once every few days.

During my test, I performed a full scan of my Mac which took about 30 minutes to scan over 1.7 million files. This was a lot faster than other antiviruses — Avast, for example, took about an hour to do a complete scan. The quick scan was extremely fast and 50,000+ files were scanned in 2 minutes. From the “Logs” button at the top right corner, I could see details like how many files were scanned and what malware was detected. 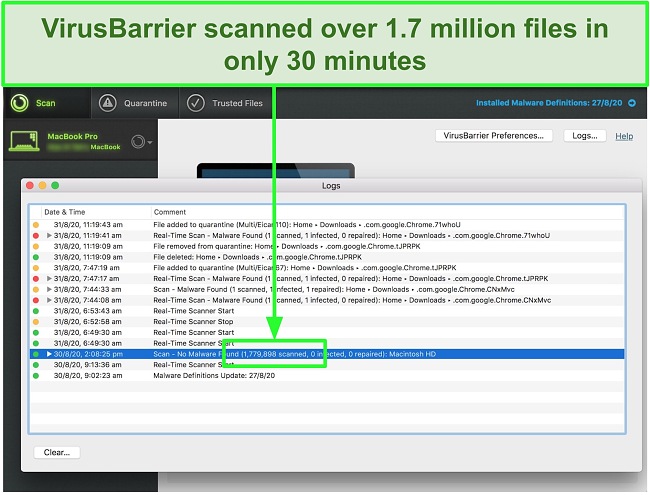 VirusBarrier’s full scan was fast and efficient during testing

The small downside is that the full scan made my computer run slightly slower than usual (which is common for antivirus programs). I tried playing a game while scanning and it did slow down the program slightly with less than a second of lag. However, it wasn’t bad compared to other antiviruses which often caused a severe and noticeable 1-2 seconds of lag.

When VirusBarrier detects a malicious file, you can command it to trust, quarantine, or repair the file. All 3 functions worked well during my trial. When I clicked “repair”, Intego easily repaired the test file and removed the malware on it, making it safe to use again. I especially like that the Quarantine mode blocked me from opening the file when I went to its original location and clicked on it.

If you need protection on your PC as well, you’ll be glad to know that Intego now offers a separate antivirus for Windows. I found that it was a good bonus to have, but it didn’t have the same malware detection rate as the Mac version — some ransomware went undetected. It also only functions purely as an antivirus with no extra features. So you may want to consider it if you’re only using your PC as a backup computer. Norton would be a better choice if you want an antivirus program with complete security features for Windows.

Protect your devices with Intego now

Intego’s real-time scanner constantly monitors any files or programs that come into contact with your device for malware. I found this very convenient as I didn’t have to keep manually running scans whenever downloading new files.

Intego has 3 levels of protection — minimum, standard, and maximum. For the minimum level, your Mac will only be safe from macOS malware. The standard setting provides additional safety from Windows and Linux malware and scans your emails and attachments. With the maximum level, you get the best coverage with added features like iOS devices scans (while they’re connected to your Mac). However, this level is also the most resource-intensive and can slow down your device.

I tested the real-time scanner using a malware test file. As soon as I attempted to download the file, Intego immediately detected it and sent me a warning pop-up. This reassured me that my computer is protected at all times, even if I accidentally try to download something dangerous. 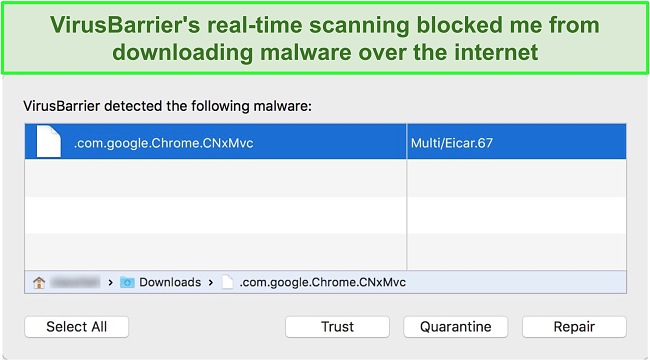 VirusBarrier blocked me from downloading malware in