Love Watching Trans7? Here’s How to Watch it Abroad

If you didn’t already know about Trans7 in Indonesia, it burst into the public domain when it broadcast the 2018 FIFA World Cup earlier this year. Initially launched in 2001 as TV7, it was rebranded in 2006. 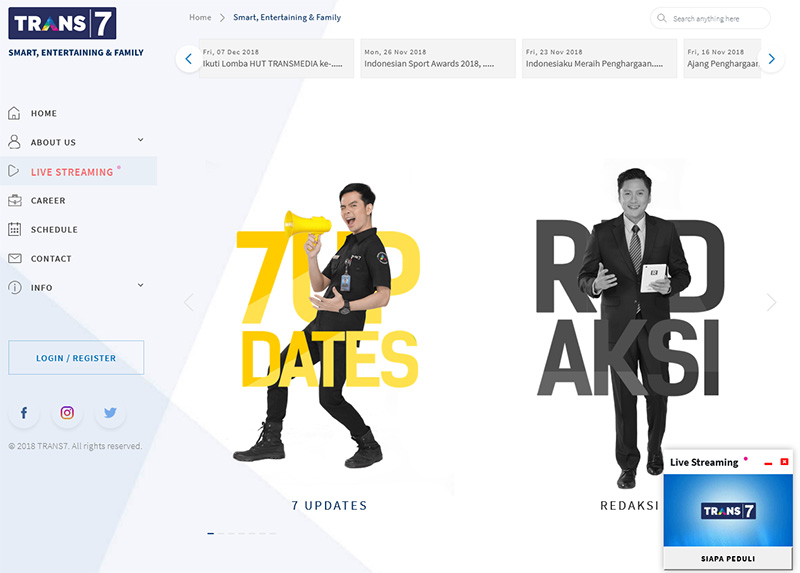 It broadcasts lots of sports programming in Indonesia along with popular shows including “Mata Najwa”, “Opera Van Java”, and “Hitam Putih”.

If you are one of the 8 million Indonesians living outside your home nation, or if you are travelling or working abroad, it’s natural to want to keep up with your favorite sports, shows, and news back home.

Unfortunately, that’s not an option because of Trans7’s policy to geo-block its content. That means if you are trying to access its streaming capabilities from outside Indonesia, you’ll get a message reading “403 Forbidden Page. Sorry, you are not authorized to view the requested page.” In plain language, this means that the Trans7 security protocol has recognized that your IP address is not originated in Indonesia and blocked you from accessing its streaming content.

However, this setback does not limit you from watching Trans7 while out of the country. By enabling a virtual private network on your favorite Internet-capable device, you can stream your favorite shows at anytime from anywhere in the world. This blog will explain how VPN technology works, how you can use it to access Trans7 content, and what the best VPNs are for the job.

A VPN connection is one made using a VPN client, which can be downloaded and installed to the Internet-capable device of your choice. The connection itself links your device to a remote computer located in another jurisdiction that employs multiple types of security technology to keep it safe from hackers, cybercriminals, and various legitimate watchdogs.

The connection between the two devices is encrypted, so that any material passing either way, cannot be seen. When you’ve established a connection between your device and a remote server in Indonesia, you can begin sending requests to view Trans7’s website and access its streaming services. These requests will be decrypted by the remote computer and assigned a new IP address from that jurisdiction; for this example, one from Indonesia. The remote computer will now send your data requests to the website attached to the IP address.

This will initiate a handshake with Trans7’s security which will recognize the Indonesian IP address and begin fulfilling your requests. The material you stream will download to the remote server in data packets, which will be encrypted and sent via the VPN connection. On your end, the data will be decrypted.

You can then view Trans7 anytime from any place, whether you’re in New Zealand, Nigeria, Nepal, or Namibia.

Step-by-step: How to use a VPN to stream Trans7 Content

VyprVPN was founded by individuals who have been handling online security since the foundation of the Internet itself. Based in Sweden, the company is high on security with 256-bit AES encryption, zero-knowledge DNS, anda  kill switch.

VyprVPN also does not limit bandwidth for its users and offers them the choice of more than 200,000 IP addresses located on more than 700 servers in more than 70 countries.

PrivateVPN has some of the toughest security protocol around, including a strict no-logs policy, 2,048-bit encryption, built-in leak protection, and an automatic kill switch.

It also has an entire month-long free trial so if you don’t like it, you can always ask for your money back.

SaferVPN has more than 760 servers available throughout 35 countries and offers good spees, a kill switch, and up to 5 devices per license.

Based in Israel, it takes its security and privacy promises very seriously and has support for multiple types of data encryption including PPTP, L2TP/IPSec, IKEv2, and OpenVPN.