How to Watch Netflix in Indonesia & Avoid IndiHome Block in 2021

IndiHome has blocked subscribers from watching Netflix in Indonesia, but that doesn’t mean customers have to suffer. You can continue to access Netflix and other restricted content if you bypass the blocks by connecting to a remote server.

The process isn’t as difficult as it sounds; there are three simple steps to watch Netflix in Indonesia without having to cancel your IndiHome account.

Using an alternative server can also allow you to explore other Netflix libraries from different parts of the world.

How a VPN Will Allow You to Watch Netflix

A VPN allows you to connect to a remote server that isn’t affiliated with IndiHome, and facilities internet access beyond the restrictions they impose. The server can be anywhere, and IndiHome will have no records or indicators as to what websites you are visiting.

In addition, a good VPN will provide you with extra security features. These tools encrypt your browsing activities and obscure your browsing data so that it doesn’t get into the hands of malicious or unintended third-parties.

However, Netflix attempts to block all VPNs and Proxies from accessing their servers. Therefore you will need a premium VPN that can avoid detection. While there are many free VPN services available, they’re incompatible with Netflix and come with data caps and questionable privacy policies. 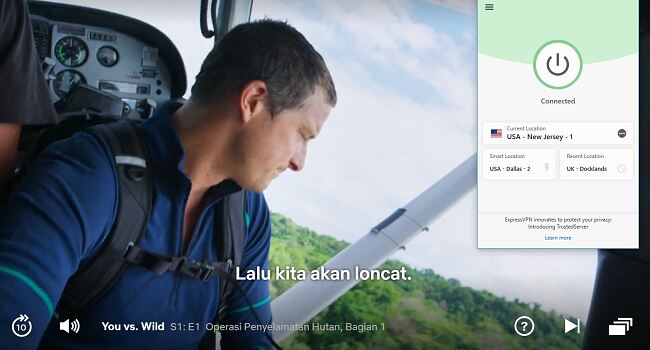 Another VPN that has become extremely popular for its ability to help users regain access to Netflix while in Indonesia is ExpressVPN. The service not only offers users a range of server locations but also comes with the highest standard 256-bit encryption, DNS and IP leak protection, an automatic kill switch, as well as an airtight privacy policy.

With an ExpressVPN plan, you can protect five devices simultaneously. Better yet, you can download the application no matter which operating system you use as Express is available for Windows, Android, Mac, iOS, and Linux users as well as routers, and various other types of devices.

ExpressVPN offers all users a live chat feature which is available 24 hours a day, seven days a week.

2. CyberGhost – Very easy to use

If you want to unblock Netflix in Indonesia while on a budget, CyberGhost may be your best bet. Plus, you can jump on the live chat to ask the customer support team which servers are capable of unblocking Netflix while in Indonesia.

Furthermore, CyberGhost comes with all the highest standard security features, including 256-bit encryption, DNS and IP leak protection, as well as a kill switch. The company isn’t part of the 14 Eyes Alliance and has a strict no logs policy so you can rest assured knowing that your data won’t get into the wrong hands.

Every CyberGhost VPN plan comes with the opportunity to protect up to seven devices at the same time. There is also a 30-day money back, guarantee period in case you decide it’s not the service for you.

Bypassing IndiHome’s Netflix blocks while in Indonesia doesn’t have to be complicated. With the help of a high-quality VPN, you can start catching up on all your favorite shows and movies in no time. By opting for one of the five services above, you’ll be sure to bypass any ISP blocks, no matter where you are in the world.