I currently live in Warsaw, so I know firsthand that even if you already have a subscription to Hulu, you’ll be blocked from watching it while in Poland.

Luckily, through trial and error I found the best way to watch Hulu from anywhere — with a quality VPN. If you get the right VPN, you can easily hide your true location and bypass Hulu’s geo-restrictions by making it look like you’re in the US.

To make sure you don’t waste your money, I personally tested all 15 VPNs that claim to work with Hulu and narrowed them down to the best 2. ExpressVPN is my #1 choice for its responsive network and fast speeds that ensure high streaming quality every time. You can test it yourself risk- free for 30 days with its “no questions asked” money-back guarantee.

Like so many other streaming platforms, Hulu restricts who can access and watch its content. It currently only has licensing agreements with the US and Japan (with separate subscriptions), so it uses geoblocking technology to prevent subscribers from watching outside of its service area.

Fortunately, it’s easy to bypass these blocks with a premium VPN. By simply connecting to a US server, you can change your virtual location and connect to Hulu without its technology recognizing that you’re anywhere else. I’ve tested this numerous times myself and have been able to watch my favorite content such as Letterkenny and Palm Springs without any issue.

Although Hulu stated that they’re planning to roll the service out internationally, this wouldn’t be until at least 2021 — and even then it’s not certain! Use one of the quality VPNs below and you can watch Hulu from Poland without any restrictions.

1. ExpressVPN — #1 VPN for Watching Hulu Without Buffering or Lag

ExpressVPN is the best VPN for watching Hulu from Poland, thanks to its highly-responsive server network and high speeds (which means no lag). When you use lower quality VPNs, you spend more time waiting for your show or movie to buffer than you do actually enjoying it. Luckily, when I tested US servers (like New York, Denver, and San Francisco) they all loaded my content in 2 seconds or less! I streamed Letterkenny with no interruptions or buffering, even after 3 consecutive hours of watching!

If you want high-quality streams, you need consistently fast server speeds. With this in mind, I tested ExpressVPN at different times of day — my average speed with US servers was just under 130Mbps. To stream in HD you need a minimum of 5Mbps and 16Mbps for 4K, so you can easily exceed these resolutions with ExpressVPN.

As for actually bypassing Hulu’s geoblocking technology, I didn’t encounter a single error during all of my connection attempts, regardless of which US server I connected to. 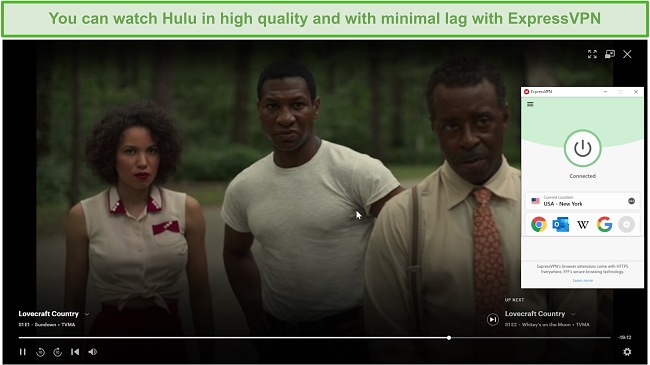 I was thrilled with ExpressVPN’s high-quality streams

ExpressVPN allows you to connect up to 5 devices at once, so while you’re watching Hulu, your friends or family can easily watch something else on their devices. Even though I only tested ExpressVPN with Windows, Mac, Android, and iOS, it also has apps for Smart TVs, Android TV, and Fire TV, so you can really take advantage of your subscription.

Don’t just take my word for it — try ExpressVPN for free for 30 days with its money-back guarantee and test its lag-free Hulu streams for yourself. If you want your money-back, you’ll get it with “no questions asked.” I tested this by using the service for 2 weeks and then contacting an agent to cancel through live chat. The whole process took less than 5 minutes and I had the money back in my account just 5 days later.

CyberGhost has a dedicated Hulu server for reliable access and the best stream quality. This means you don’t have to waste time trying regular servers which might not work. I tested this myself by connecting and disconnecting to the Hulu server over 20 times on the weekend — I didn’t encounter a single streaming error on Hulu. 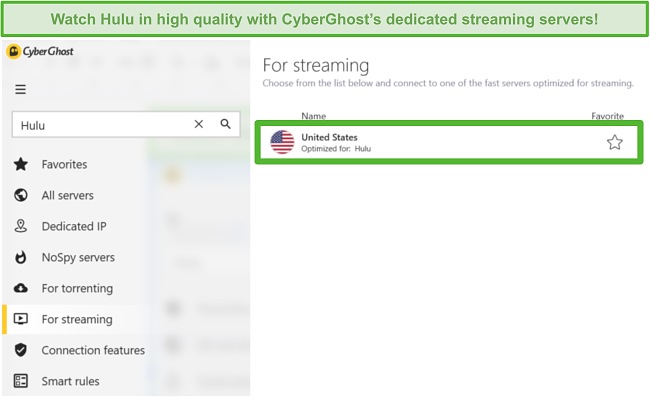 It’s effortless to connect to streaming servers with CyberGhost

I reached an average speed of 50Mbps with CyberGhost’s Hulu server. This is the slowest speed on this list but more than double than you need for streaming Hulu’s 4K content. I tested some of the regular servers and reached speeds around 100Mbps — it’s likely the streaming servers are slower due to a higher number of users.

You also get support for up to 7 simultaneous devices, which is perfect for sharing a subscription with family or friends who also enjoy streaming international content! This applies across all of CyberGhost’s supported devices, including Windows, Mac, Android, iOS, Fire Stick, Android TV, and more.

To test its features yourself, you can check out CyberGhost’s dedicated Hulu server for free for 45 days (if you choose a longer subscription) with its money-back guarantee. This is a generous policy and gives you enough time to verify that Hulu can be consistently unblocked. I wanted to confirm that I could actually get a refund, so I signed up for a month and requested to cancel after a week of testing. The agent tried to convince me to stay, but quickly processed my refund when I told them I didn’t need assistance. I had the money back in my account just 3 days later!

Watch Hulu from Poland with CyberGhost

June 2021 Update: CyberGhost has dropped prices for a limited time to a crazy $2.25 per month for the 3-year plan (you can save up to 83%)! This is a limited offer so be sure to grab it now before it's gone. See more information on this offer here.

As someone who has done extensive research on the best free VPNs on the market, I can safely say that they’re a terrible idea for watching Hulu.

Free VPNs have technical and safety-related issues while streaming since they:

You won’t have any of these issues with a premium VPN like ExpressVPN. Instead, you get an extensive and fast network that can reliably unblock numerous popular streaming services including Hulu. You can try it for free for 30 days with its “no questions asked” money-back guarantee. 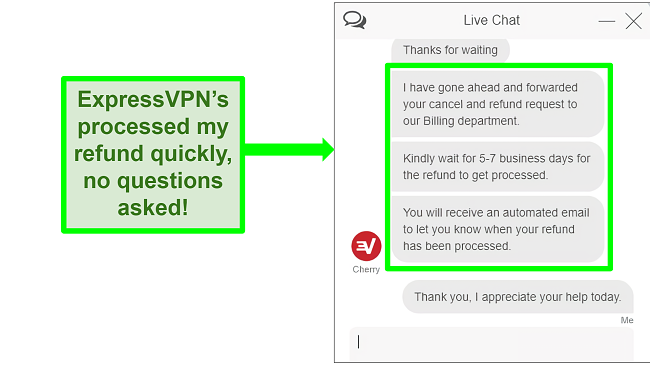 You can get a hassle-free refund from ExpressVPN in minutes

FAQs on Watching Hulu Outside the US

😃 Is Hulu planning to expand internationally?

Disney owns Hulu, and its CEO recently stated that it’s aiming for a wider international Hulu rollout as soon as 2021. Hulu is already in Japan with some different original content such as Ni-che Sensei and The Relative Worlds, but it requires a separate subscription.

🤑 What Hulu packages are available?

Hulu offers 4 base plans with some premium add-ons:

🤓 Which devices is Hulu compatible with?

Hulu is available on a considerable number of devices, including:

ExpressVPN supports the majority of these devices, making it perfect for watching Hulu from Poland.

😅 Will I get locked out of my Hulu account if I use a VPN?

No, Hulu doesn’t lock you out of your account for using a VPN. However, although Hulu’s terms of service don’t explicitly mention VPNs, they do state the following:

“…you may not use any technology or technique that obscures or disguises your location when you are accessing the Services.”

Regardless, Hulu doesn’t ban its users but your IP addresses might get blocked. If this happens, just be sure to connect to a VPN so you can get a new digital address that can access Hulu.

🙃 Why isn’t my VPN unblocking Hulu?

Your VPN might not be unblocking Hulu for a few reasons:

😎 What else can I unblock with a VPN?

A VPN can unblock Netflix and several other streaming services, including Disney+, HBO Max, Amazon Prime Video, BBC iPlayer, and YouTube TV. Plus, you can access international streaming services by switching to a country server that offers high-quality free content such as UKTV in the UK, ProSieben in Germany, and 10 Play in Australia.

You can also bypass internet restrictions from governments around the world with a VPN. This means you’ll be able to get past government-imposed restrictions on adult content in the UK and other countries. Additionally, although China’s internet censorship laws prevent you from accessing certain foreign websites, you can use one of the best VPNs for China (like ExpressVPN) and avoid the blocks.

Stream Hulu From Poland in the Highest Quality With a VPN!

ExpressVPN is my top choice for watching Hulu from Poland for its lightning-fast loading and high speeds. This eliminates lag so you can watch everything you want in the highest resolution available (and without annoying interruptions). The best part is, it also unblocks other platforms like Netflix, Amazon Prime Video, and HBO Max so you’re not limited to the Hulu library.

See for yourself — try ExpressVPN for free for 30 days and watch all of Hulu’s content with zero risk!