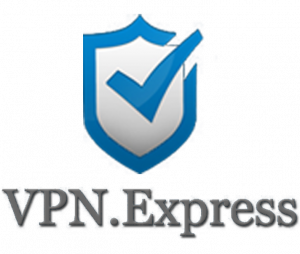 VPN.Express wants to protect everyday internet users from cybercriminals by bringing privacy and security to its users. To see if this VPN is on track to achieve this goal, I decided to try it myself.

Unfortunately, VPN.Express doesn’t work as I couldn’t connect to the service. I created an account, downloaded the Windows app, and signed in. That’s it. I couldn’t do anything beyond that. I even tried to pay for the premium service, but all payment channels aren’t working.

It appears VPN.Express was created to trick users into buying it by leveraging the name of the more well-known ExpressVPN. So don’t even consider paying for the service, even if you could. Instead, you can check these top-rated VPNs that are fully functional and provide top-grade privacy and security features.

Since VPN.Express doesn’t work. I recommend you try another VPN that works. My go-to VPN for unblocking all popular streaming platforms is Cyberghost. You can try Cyberghost with its specialized servers for streaming. Whenever I’ve ever tried to watch my favorite shows on platforms like Netflix, Hulu, HBO Max, Disney+, and Prime Video, CyberGhost has proved reliable.

Is VPN.Express Fast? No! There Was No Way to Find Out

Again, since I couldn’t connect with any VPN.Express server, I couldn’t get a feel of the speeds. For a VPN that works and has lightning-fast speeds, ExpressVPN is my top choice. I always get super-fast speeds with ExpressVPN no matter which server I connect with — including those that are far away.

VPN.Express claims to have 64 countries, but that doesn’t appear to be true. Furthermore, it claims to have optimized P2P servers in the US, UK, Brazil, Spain, Sweden, Norway, Belgium, South Korea, Morocco, and more. Sadly, I couldn’t find any server to connect with on the Windows app. 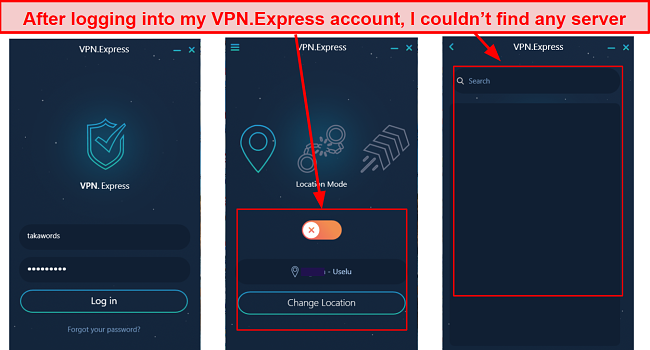 I couldn’t find any available server on the VPN.Express app

VPN.Express lists 3 security protocols (OpenVPN, L2TP/IPSec, and PPTP) on its website. This includes the listed AES-256 bit encryption for L2TP/IPSec, 2048 bit SSL encryption for OpenVPN, and MPPE-128 encryption for PPTP. Unfortunately, since the VPN doesn’t work, these security features can’t be used. One thing is clear.

VPN.Express states that it doesn’t keep any logs that can be traced back to you. The VPN guarantees its users that it does not “collect or store users activity, browsing history, traffic, content, IP address, or any other sensitive information.” That said, if it had worked, the VPN would have collected information such as email address and password, and payment data for communication and recurrent billing purposes, respectively.

A glance at the VPN’s website shows that it outrightly supports P2P. It even claims to have servers optimized for P2P and torrenting. However, when I downloaded the VPN, I couldn’t find any server list, including P2P servers. For a VPN with solid torrenting capabilities, you can try Cyberghost with hundreds of specialized P2P servers for safe filesharing.

Does CryptoStorm Work in China? No!

VPN.Express doesn’t work in China since it doesn’t even work anywhere, to begin with. I even reached out to customer support for help and clarification, but none of the channels were responsive. If you’re traveling to China and need to stay protected as you access the internet, I recommend you try ExpressVPN, which is guaranteed to work for you in China.

VPN.Express states that you could connect up to 5 devices. I tried to see if I could try the VPN on my PC and phone. Unfortunately, I could only log in on my Windows device. Since there wasn’t any server to connect with, I couldn’t test any of the features. If you want a VPN that works and connects multiple devices, IPVanish offers unlimited device connections.

VPN.Express claims to support many operating systems, but I could only download the Windows app. The VPN has a Windows client and configurations/set up guides for iOS, Android, Linux, macOS X, Chrome OS, Synology, D-WRT, Tomato, and Socks 5. However, during my tests, I couldn’t download and log in on any of these devices apart from Windows. That said, I couldn’t connect with the service or any server on my windows device— it simply doesn’t work.

Ease of Setup & Installation — Simple to Download the Windows App

It was easy setting up the Windows app. I simply downloaded the app from VPN.Express website and ran the installer. I could log in with my registration credentials but couldn’t find any available server to connect to. Other operating systems require manual setup with OpenVPN, L2TP/IPSec, or PPTP.

VPN.Express has support channels via a contact form, email, and social media. Unfortunately, none of the channels worked during my tests. I reached out on Facebook Messenger, Email, and a contact form. I didn’t get any response from any of the channels. Even the phone number listed on the website is out of service. 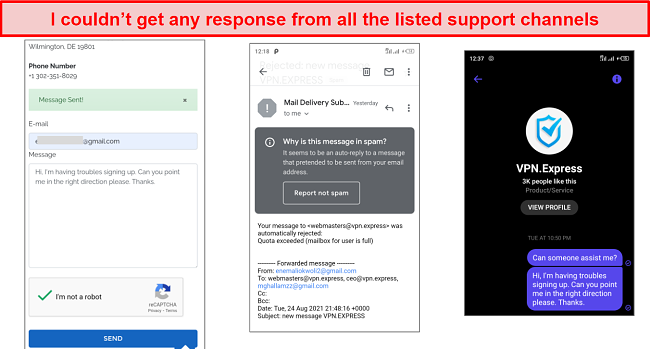 It was really disappointing that I couldn’t get any of my questions answered. I was curious to find out why the VPN doesn’t work. All my efforts proved abortive across all the channels. So, if you have questions about the vendor, there’s no way to get answers.

VPN.Express offers 3 premium plans — a monthly, 6-month, and yearly plan. The listed payment methods include PayPal, Paymentwall, and cryptocurrencies. I tried paying through all the listed channels, but it just didn’t work. I even reached out to the crypto payment partner to find out why the merchant payment isn’t working. I was informed that the payment method wasn’t set up properly.

I got an error message when I tried to pay for VPN.Express with bitcoin

However, it appears to have received some payments in the past from reviews left on the payment profile of the vendor. Although the vendor offers a 7-day money-back guarantee, there was no way for me to test it since I couldn’t pay. I wouldn’t even recommend paying for VPN.Express even if you could as the VPN does not work.

VPN.Express could have been a great VPN considering the listed features. Sadly the VPN does not work or was simply a scam to drive traffic using the popular ExpressVPN brand. I wouldn’t recommend paying for it even if you could.

There are top-rated VPNs that work all year round, are reliable, and have top-notch support in case you face any technical issues. ExpressVPN — which it seems VPN.Express was trying to imitate — is my top choice. You can test ExpressVPN’s top-grade features out for yourself and if you’re not satisfied, you have up to 30 days to claim a refund.

No. VPN.Express doesn’t work. The best you can do is sign up and log in to the Windows app. You won’t find any servers, there’s no functional support channel, and payment channels don’t work. I wouldn’t recommend this provider.

Can I use VPN.Express for free?

No. VPN.Express has three premium plans that aren’t functional. While the VPN claims to offer a 7-day money-back guarantee, there’s no way to connect with the service and try it out.

I don’t like to recommend free VPNs due to the lack of features, security, and privacy. However, if you are looking to try a VPN but don’t want to spend any money yet,  these are a few reliable options that you can test out.

No. While VPN.Express claims to have military-grade encryption and not keep any logs, you can’t even use the VPN. It just doesn’t work. None of the payment methods worked for me but even if they do end up working for you, I would not recommend spending money on this VPN. You might end up paying for something that does not work with a support team that was unresponsive.

I recommend using another VPN that’s trusted to work. For instance, you can use ExpressVPN to safely accessing the internet and protecting all your devices. It comes with top-grade security and privacy features.

WizCase is an independent review site. We are reader-supported so we may receive a commission when you buy through links on our site. You do not pay extra for anything you buy on our site — our commission comes directly