WizCase security team has found a major breach in phone-tracking service Ringostat’s database. This leak left vulnerable phone numbers, call recordings, call logs, and more to potential attack. The leaked data numbers in the millions and was accessible to anyone who possessed the link. There was no need for a password or login credentials to access the information, and the data was not encrypted. The leak has since been secured.

Ringostat is an Eastern European company specializing in call-tracking, analytics, and other marketing aids for smartphones. It was founded in 2013 and operates worldwide but mainly in Ukraine and Russia.

Our team of ethical hackers led by Ata Hakçıl discovered an ElasticSearch database used by Ringostat which exposed over 800 GB of user data.

The ElasticSearch server leak exposed the details of 67,000 Ringostat clients. As the company is based in Ukraine, most of its clients could be identified as Ukrainian or Russian. The information leaked included approximately 8,000,000 voice recordings, 13,000,000 phone numbers, and hundreds of millions of call logs and metadata. All told, approximately 2 billion records were leaked.

The voice recording information could be accessed by anyone with a link and an Internet connection, leaving millions vulnerable. 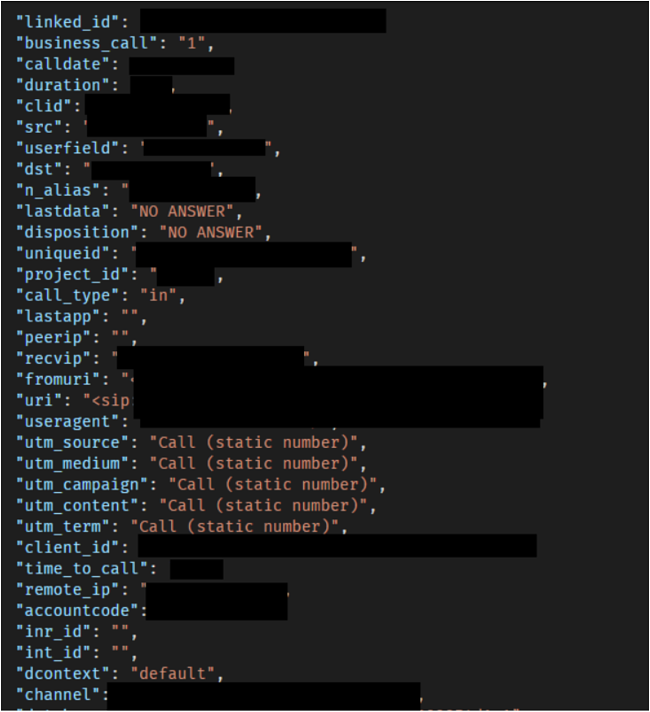 Our team also found payment records from Stripe, including users’ id, IP, port, and the time of the transaction. Client details included company names, emails, number of emails, and phone numbers. Call recording data contained IP, port, and timestamp. Below is a table summarizing the types of records leaked and what data those records contained.

It appeared that some media sites misunderstood our report. To make it clear, we did not state that the data we found was stolen data. We discovered an open, unprotected and unencrypted ElasticSearch server owned by Ringostat themselves. Our team cannot confirm whether or not the data was stolen while it was open.

Identity Theft: Leaked personally identifiable information (PIIs) can be used to access accounts on other websites, leading to further information leaks and outright identity theft. If found by bad actors, this information can lead to severe financial loss for many.

Scams, Phishing, and Malware: It is common for unethical hackers and criminals on the Internet to use personal data to create trustworthy phishing emails. The more information they possess, the more believable these emails look. Clicking on emails or attachments in these emails often results in giving the hackers an opportunity to force you to download malware or obtain easy access to your account.

Corporate Espionage: Competitors could target users on the database and attempt to steal them. If a law firm used Ringostat, for example, a rival firm could use their data to snipe potential clients from firms using Ringostat. This can result in severe financial loss for users.

Unfortunately, the above list is not comprehensive, and cybercriminals are always generating new methods to exploit anyone vulnerable on the Internet. However, users have ways to protect themselves.

As Ringostat is B2B (business-to-business), end users would not know if their data was leaked unless a service informed them. For future purposes, we recommend always inputting the bare minimum of information when making a purchase or setting up an account on the Internet. The less information you give hackers to work with, the less vulnerable you are to attack.

For examples of theft, do not let them into your home on first request. If you are ever unsure of your safety in these situations, always verify the identity of company employees who show up to work with the company itself.

Here are comments from Ringostat that we added as a courtesy – we cannot confirm these claims:

“1. There was no data leakage to the network. This was confirmed by our unscheduled security audit.

2. No company is totally secured against the detection of vulnerabilities or bugs. They occur after software updates (third-party programs, operating systems, etc.). The most important thing is how quickly the company fixes these vulnerabilities.
We react without delay, as a result our customer data is safe.

3. We cooperate with White hats to help us improve our security.” [Note from the author: Other than sharing our findings with Ringostat, there was no cooperation between us and the company.]

WizCase is a widely popular web security platform offering advice and tips for thousands of readers every week. Translated into over 30 languages, our website has gained the trust of a wide number of people worldwide. Our team regularly discovers new data breaches across the internet and contacts them to companies responsible for them prior to publishing any reports. We have found links on websites and in databases relating to news websites, popular dating apps, and the medical industry. Together, we’re working hard towards creating a safer online environment for everyone.

In this case, we reached out to Ringostat the day after our discovery. They never got back to us and the server was secured within a few days.