How to Watch Uncut Gems on Netflix (Updated 2020)

Excited to see if Adam Sandler’s hit film is worthy of its high IMDb review? Unfortunately, there’s bad news if you’re in the US.

Uncut Gems is available in Netflix countries around the world — but not the US. There’s no release date confirmed either.

Luckily, I’ve got a solution: get a VPN. A VPN changes your online location so you can log in to Netflix from another country and watch Uncut Gems. The film is available on Netflix UK, Germany, Canada, Australia, New Zealand, and more.

Netflix is always blacklisting VPNs though, so not every VPN will work. That’s why I tested over 15 services to find the best VPN for Netflix.

Based on my tests, ExpressVPN is the #1 VPN as it could reliably access Netflix in any country and it has the fastest streaming speeds.

When Will Uncut Gems Be Released on Netflix US?

There’s currently no release date for Netflix US. Uncut Gems is distributed by A24 in the US — and A24 has a history of releasing its films on Netflix US after 2 years have passed since the theatrical release. Based on this, I expect Uncut Gems will only be released on Netflix US in 2022.

Your best option is to download a VPN and stream Uncut Gems from another Netflix country. During my tests, I used ExpressVPN to successfully watch Uncut Gems on Netflix UK, Canada, Germany, Australia, and New Zealand.

Netflix US doesn’t list a release date for Uncut Gems

Why You Need the Right VPN for Netflix

Not all VPNs work with Netflix. In fact, Netflix is one of the trickiest streaming services for VPNs to access.

Netflix uses your device’s Internet Protocol (IP) address to find out where you are. Your IP address contains information about your physical location, which is how Netflix determines which library you can access. A VPN will hide your real IP address and give you a new one from any country you choose.

However, Netflix is constantly flagging and blocking the IP addresses of VPNs — and only quality VPNs can keep up. This is the reason why I advise getting a quality VPN for streaming Netflix, like ExpressVPN.

ExpressVPN works hard to stay ahead of Netflix’s crackdown on VPNs. As soon as Netflix identifies and blocks its IP addresses, ExpressVPN will immediately add new ones for its users. This ensures that you can always watch Netflix whenever you want.

ExpressVPN is my #1 choice for streaming Uncut Gems due to its fast speeds and reliable servers for watching Netflix.

I tested Netflix on multiple servers across the world, including the UK, Germany, Canada, Australia, and New Zealand. The fastest server I tried was Canada – Montreal at 23kbps. After the initial loading time of just 3 seconds, I enjoyed the entire film without interruptions. 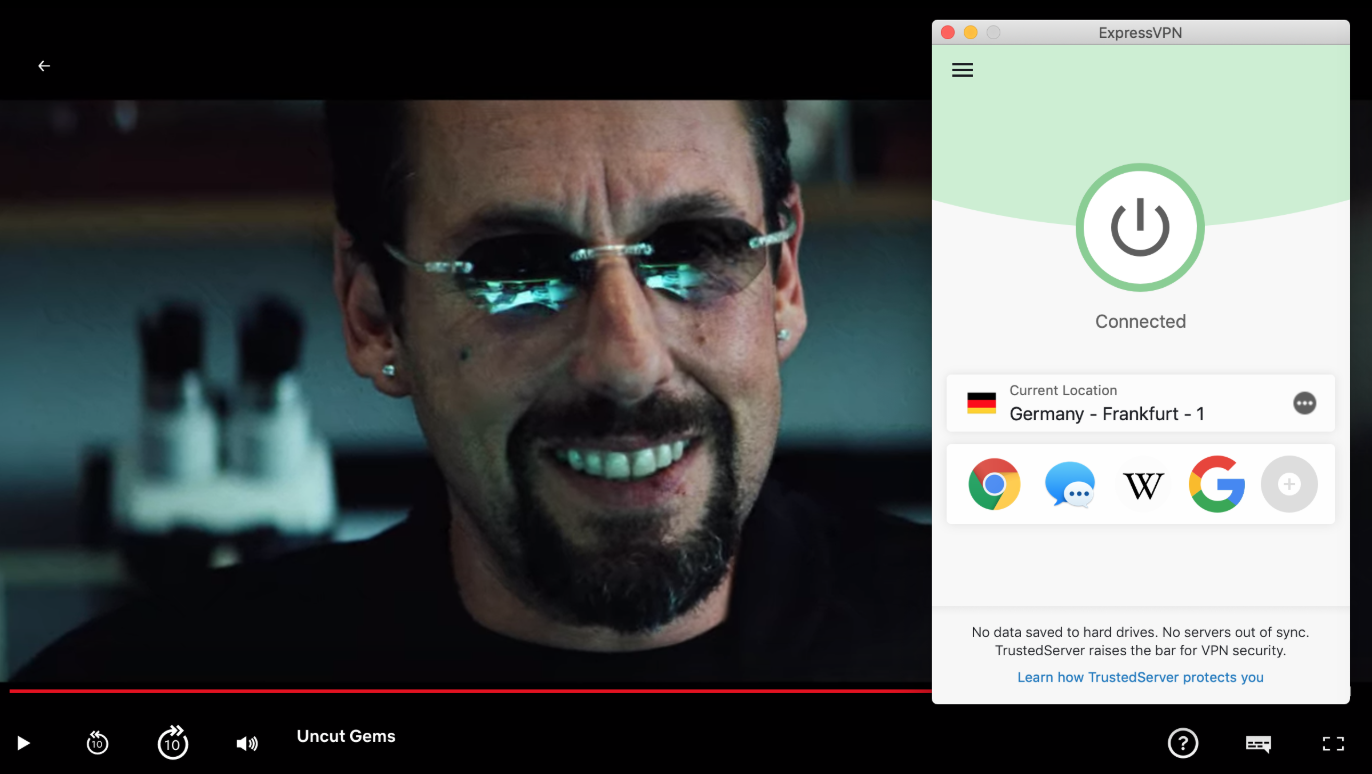 You can even save the fastest server for each Netflix country to your Favorites list by clicking on the star icon. In the future, all you’ll have to do is double-click to start watching Netflix! 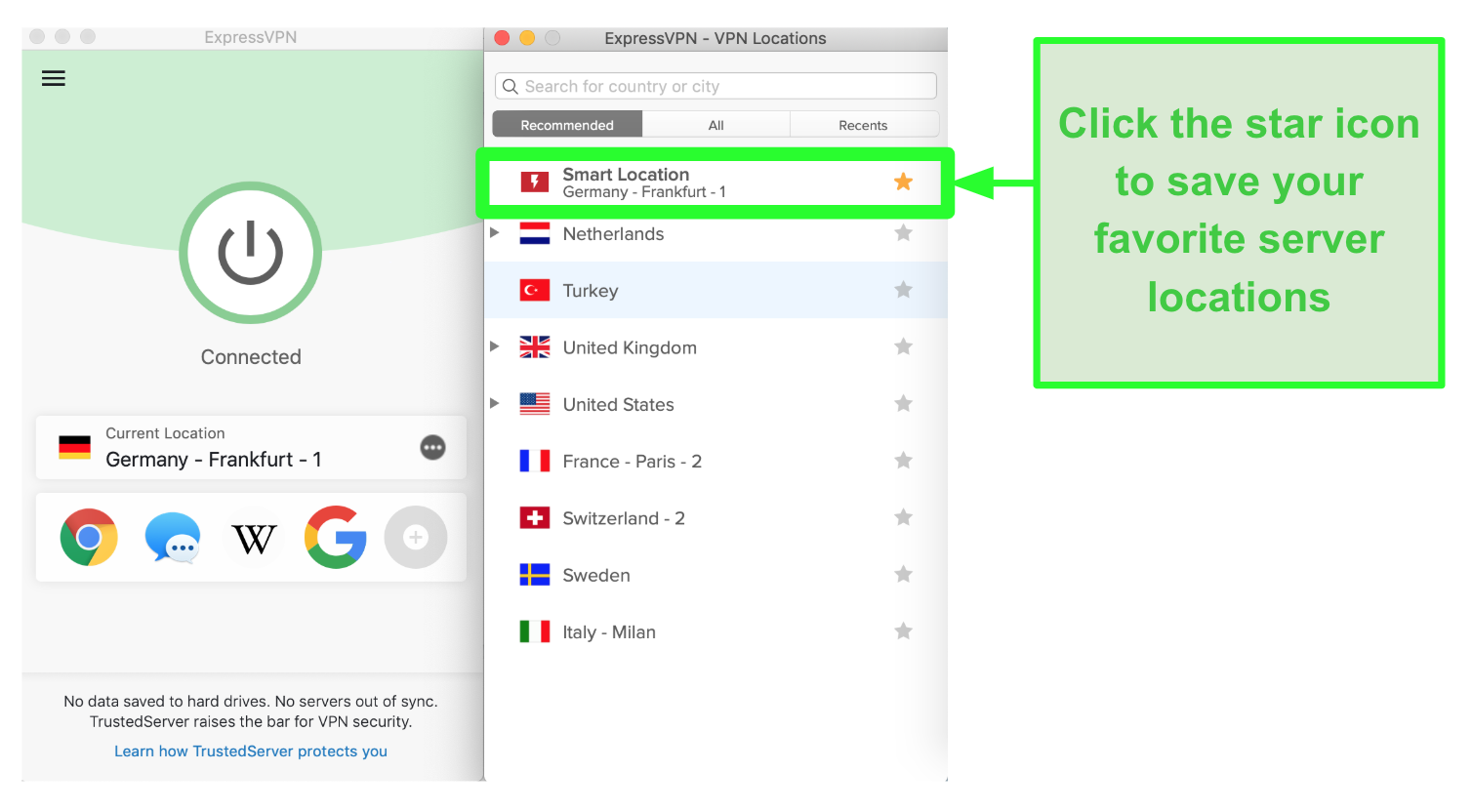 ExpressVPN offers a 30-day money-back guarantee, so you can watch Uncut Gems and other Netflix programs at no risk to you. It’s a “no questions asked” policy and I’ve even tested it for myself — it was easy to request a refund via the 24/7 live chat support.

NordVPN equips each of its servers with SmartPlay technology, which provides unrestricted access to Netflix and other global streaming platforms.

I successfully watched Uncut Gems on Netflix UK, Germany, Canada, Australia, and New Zealand. In every country, my streams were smooth and buffer-free. However, my speed was the slowest in Australia and New Zealand — I had to wait nearly 20 seconds for the video to start playing. 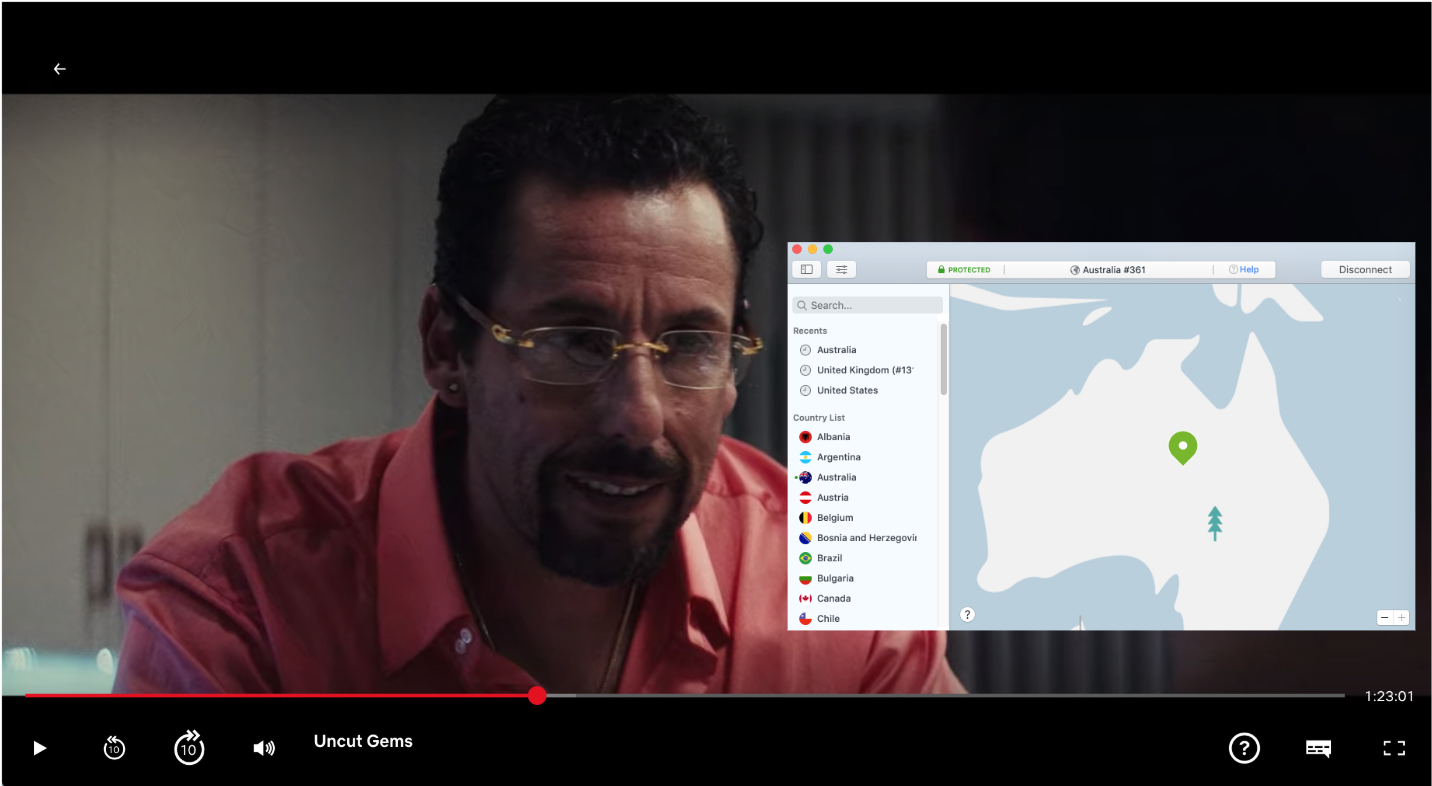 Even though NordVPN has over 5,200 servers worldwide, it’s easy to find the fastest server available. You can either click on the map interface or click on your chosen country in the sidebar.

NordVPN has a 30-day money-back guarantee for new subscriptions. If you change your mind during this period, you can request a refund via 24/7 live chat and get your money back within 7 business days.

3. CyberGhost — Optimized Netflix Servers in the UK and Germany

CyberGhost offers optimized servers for streaming Netflix UK and Germany — and Uncut Gems is available on both of these Netflix libraries!

During my tests, my average speed on the optimized Netflix servers was 30Mbps. This was approximately 4Mbps faster than the regular servers in the same countries.

However, both regular and optimized servers were fast enough for streaming Uncut Gems with zero buffering and quick loading times. 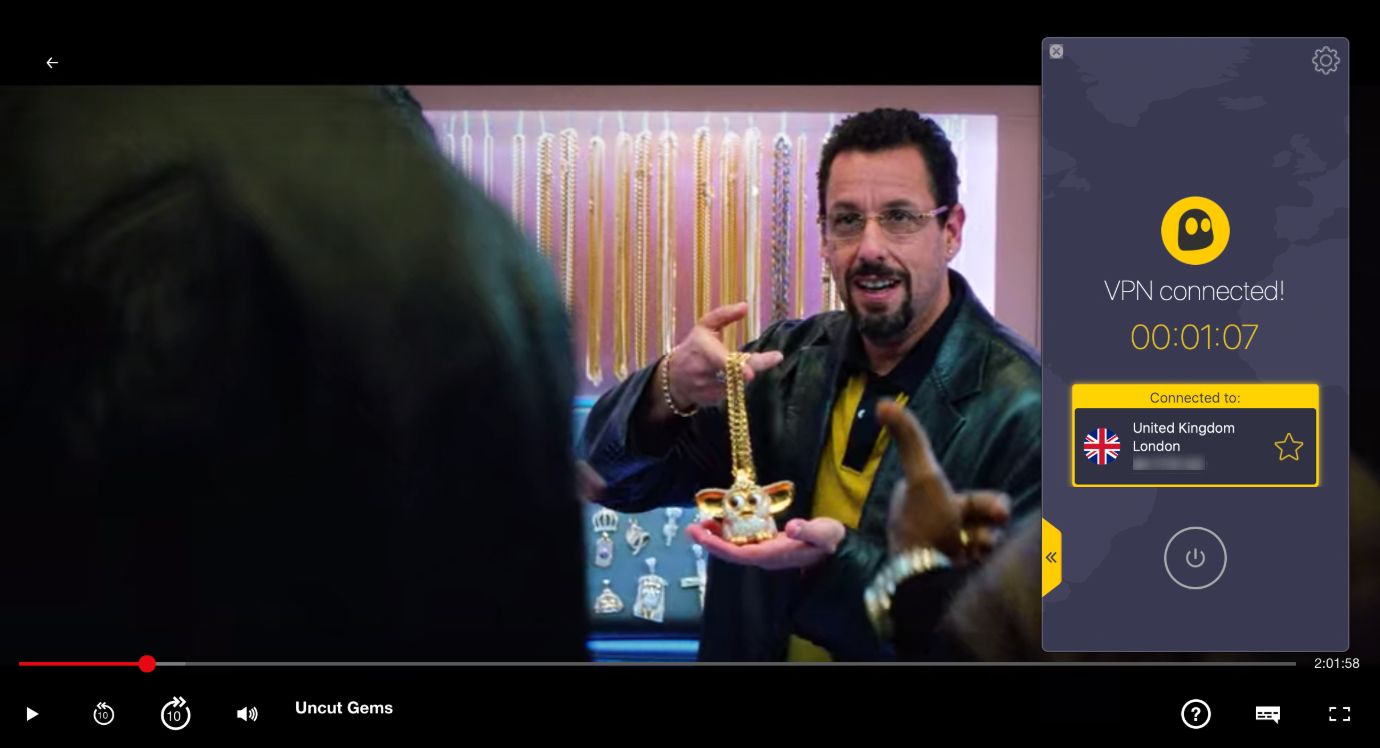 Unfortunately, I did experience some buffering when I tested the regular Australian and New Zealand servers. Both of these servers are very far from my location in the UK.

For the best streaming experience, I recommend watching Uncut Gems from the closest optimized or regular server to your physical location.

You can try CyberGhost with its 45-day money-back guarantee. This gives you more than a month to enjoy Uncut Gems and more on Netflix.

Can I use another streaming service to watch Uncut Gems?

No streaming service in the US has released Uncut Gems. I’ve checked Hulu and Amazon Prime, and neither have announced a release date.

For now, you can only stream Uncut Gems on Netflix outside the US.

Which country has the biggest Netflix library?

Netflix US has the most movies and TV shows out of all 190 Netflix countries. For comparison, Netflix US has 200+ more options than the UK, Canada, and Greece.

If you want to stream Netflix’s entire catalog outside the US, you’ll need to get a quality VPN. My #1 recommendation, ExpressVPN, has fast streaming speeds and can reliably access Netflix libraries around the world.

Don’t Miss Uncut Gems on Netflix Just Because You’re in the US!

A quality VPN lets you watch Uncut Gems on Netflix in any country, including Netflix UK, Canada, Australia, and New Zealand.

You can stream more than just Netflix too, such as Amazon Prime and BBC iPlayer in the UK. If you’re traveling outside of the US, you can even use your VPN to keep up with your favorite shows on Sling TV, Hulu, CBS, and more.

Not sure which VPN is the best for Netflix? Personally, I suggest ExpressVPN. It has a 30-day money-back guarantee too, so you can watch Uncut Gems on Netflix with zero risk.