How to Watch the 2020 Australian Open Online for FREE

The first Grand Slam championship of the year is here! You can watch the official broadcast of the Australian Open for free online — but unfortunately, it’s only available if you’re inside the broadcaster’s home country.

Luckily, a VPN lets you hide your real location so you can watch the Australian Open from anywhere. I’ve tested several VPNs, and I’ve found ExpressVPN to be the best choice for streaming the tennis tournament due to its fast speeds.

Follow my quick guide to learn how to use a VPN and live stream all the action.

Watch the Australian Open with a VPN!

Channel 9 in Australia is the official broadcaster of the Australian Open. You can stream live matches and rewatch past matches for free on its streaming platform, 9NOW. However, you’ll need a VPN as you can only stream from inside Australia.

Stream the Australian Open on 9NOW!

You can watch the free Austrian broadcast on Servus TV, but you’ll need a VPN as it’s only available in Austria.

Why You Need a VPN to Watch the Australian Open

Broadcasters showing the Australian Open are required to block content from people outside its home country. For example, you can only watch the Australian Open on 9NOW if you’re in Australia. If you try visiting Australia’s 9NOW from outside of Australia, you’ll see the following error message: 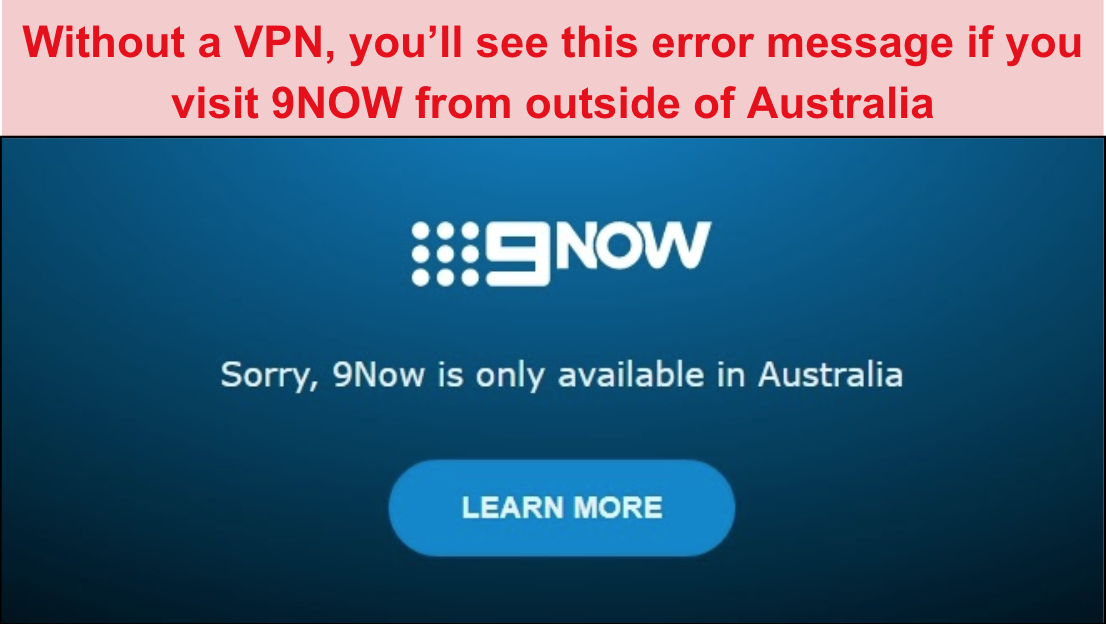 9NOW blocks its content to anyone outside of the country

With a quality VPN, this error message will disappear. A VPN, or a Virtual Private Network, helps you connect to the internet through its global network of servers. So when you connect to an Australian server and visit 9NOW, the streaming service will actually think you’re in Australia. 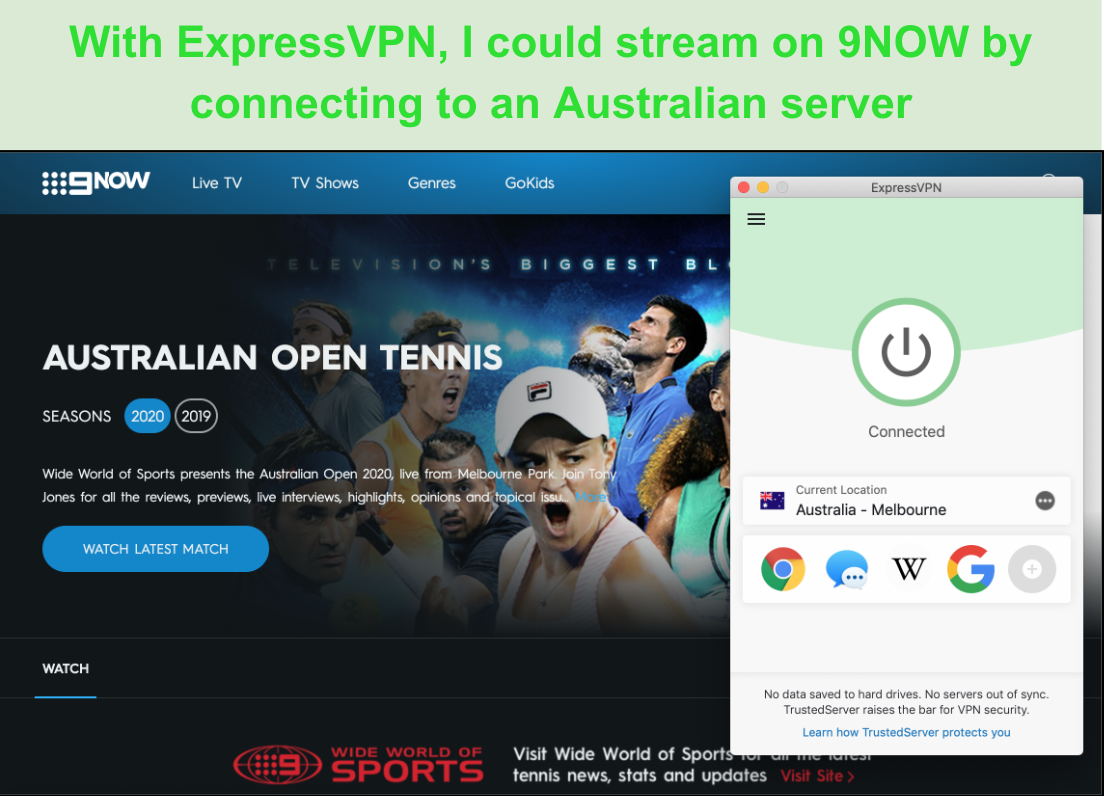 Watch the Australian Open with ExpressVPN!

ExpressVPN is my first choice for watching the Australian Open as it’s got the fastest speeds for live streaming sports. I carried out several streaming tests on 9NOW and Servus TV — buffering a live stream took less than 5 seconds, even from my location in Central Europe.

It’s easy to connect to a fast server on the desktop and mobile app. You simply search for your chosen country, double-click, and the app automatically connects you to the fastest server available. I found the mobile app perfect for streaming the Australian Open while traveling, as it’s incredibly user-friendly. 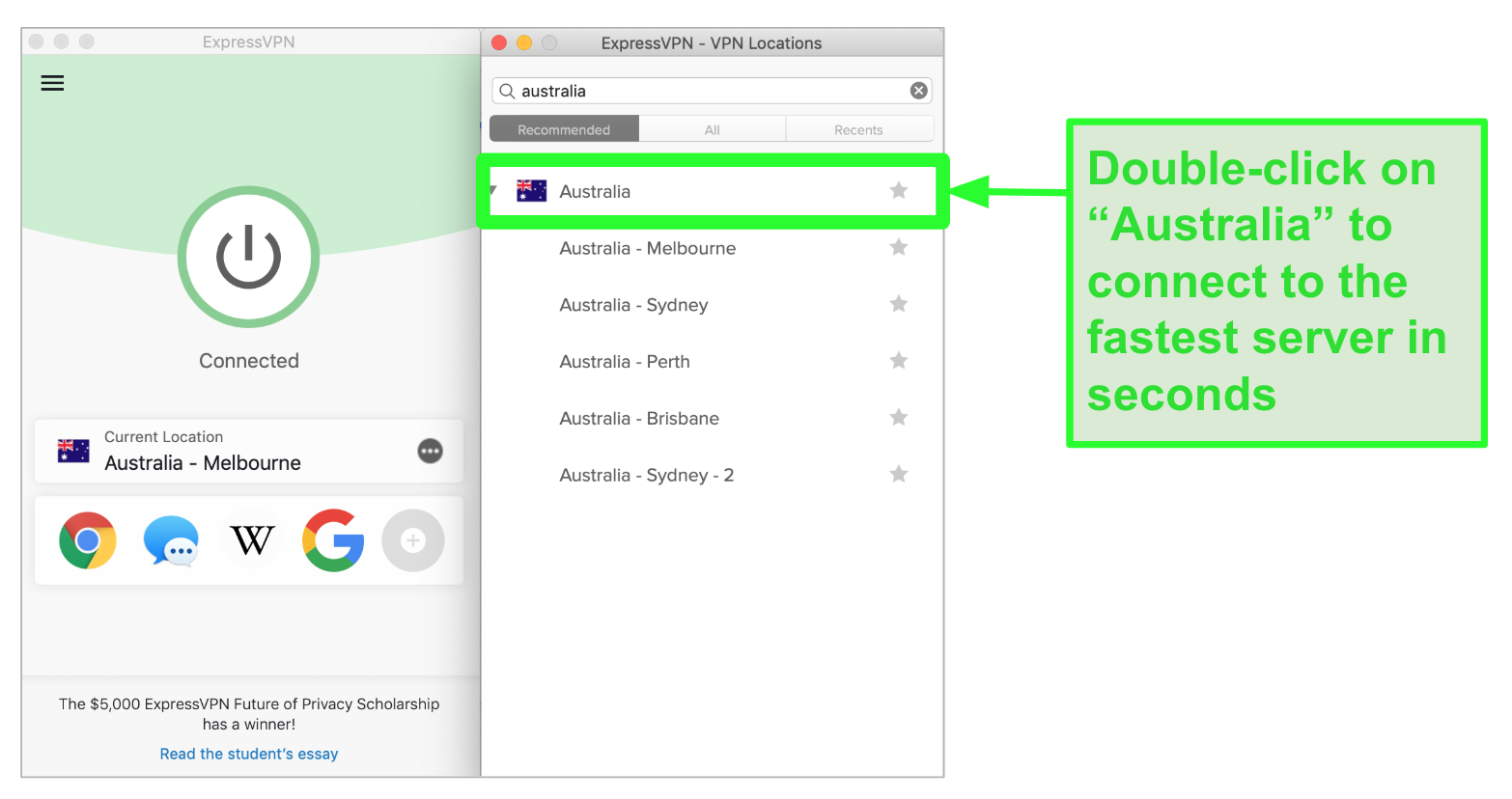 As a tennis fan, you’ll want to keep up with other tennis tournaments in 2020 too. ExpressVPN’s advanced MediaStreamer technology lets it bypass geographic restrictions on all popular streaming websites. This means you’ll be able to watch tennis tournaments all year round, including the French Open, Wimbledon, US Open, Nitto ATP Finals, and the Masters.

MediaStreamer can also be set up on devices that don’t support VPNs, such as game consoles. This makes ExpressVPN a great choice if you prefer watching on your TV.

With ExpressVPN’s 30-day money-back guarantee, it’s a no-risk opportunity to try the service and get a full refund if you change your mind. If you have any problems using the service, ExpressVPN offers 24/7 support via email and live chat.

Watch the Australian Open with ExpressVPN

2. NordVPN — Large Server Network in Australia and Austria for Accessing 9NOW and ServusTV

NordVPN is a great option for streaming the Australian Open — its huge number of servers in Australia and Austria means you’ll never have overcrowded servers during popular matches. This is especially important for live matches, where a steady server connection is crucial for keeping up with every single shot!

When I ran streaming tests on 9NOW and Servus TV, I immediately connected to a fast server and experienced very minimal buffering. Even with so many servers to choose from, it was easy to find a fast server on the app. You either click on a country’s pin on the map, or you can scroll down the server list to choose your country. A simple double-click will connect you to the quickest server.

NordVPN offers 270+ Australian servers, so you won’t have any issues with overloaded servers

Besides watching tennis, NordVPN also grants you access to other popular streaming platforms like ESPN, Eurosport, Sky Sports, Netflix, and Amazon Prime Video. With over 5,200 servers around the world, you won’t be limited in your choice of sports and entertaining options.

NordVPN offers a 30-day money-back guarantee, which gives you a month to test every feature before committing to a subscription. It’s a stress-free process to get your money back too — I got my refund approved within minutes via live chat.

Watch the tennis with NordVPN!

3. CyberGhost — Live Stream the Australian Open on 7 Devices at Once

CyberGhost is great for watching the Australian Open with friends and family, as you can connect 7 different devices with a single subscription. This is one of my favorite features — I connected 2 phones, an iPad, 3 PCs, and even an Amazon Fire Stick, and my speeds still remained fast.

During my tests, it was easy to connect to 9NOW and Servus TV. CyberGhost has 104 servers in Australia and 60 servers in Austria, so there was always a server available for me to choose from. I watched a few videos and live streams on each website with no issues.

Unfortunately, CyberGhost can’t bypass the Great Firewall of China, so I don’t advise getting this VPN if you’re living or traveling to China.

Stream the Australian Open with CyberGhost!

Tempted by Free VPNs? It’s Not Worth It — Here’s Why

Even the best free VPNs have a limited amount of servers, so every server will be overcrowded with users. You’ll have a frustratingly slow streaming experience — and get disconnected at some point during the match, as you’ve only got a limited bandwidth allowance.

Unfortunately, free VPNs are also known for selling your private data to advertisers, authorities, and potentially malicious third-parties. You risk your devices becoming bombarded with pop-up ads or your data being leaked. 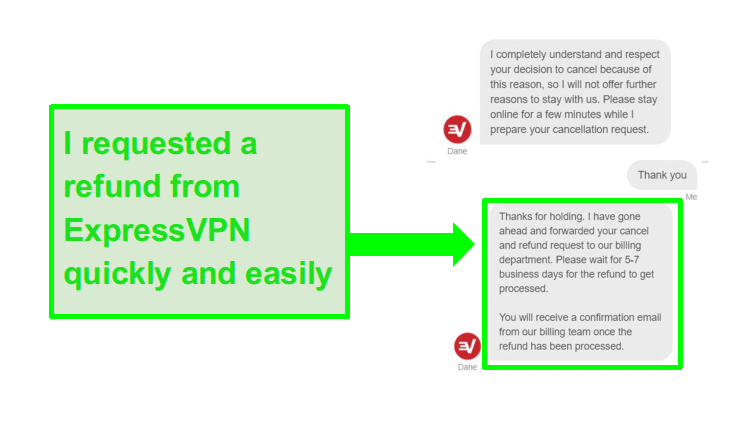 You can use ExpressVPN for free for 30 days so it’s completely risk-free to sign up!

Whether you’re a fan of Djokovic, Federer, Osaka, or Andreescu, you’ll want to catch every moment of 2020’s first Grand Slam championship! My #1 VPN recommendation, ExpressVPN, will give you the fastest live stream of the Australian Open.

And don’t forget that a VPN isn’t just for watching tennis. With a quality VPN, you can even stream live sports from ESPN, DAZN, Eurosport, BBC iPlayer, and more. This means you can watch practically any global sporting event throughout the year.

Get a VPN now so you don’t miss a single serve, rally or set!

Stream the Australian Open with ExpressVPN!