Understand the Five, Nine and 14 Eyes Alliance Before Choosing any VPN!

Let’s face it, privacy is very important to most people. Lately, it seems like protecting your privacy is becoming nearly impossible in our digital age. Every website you visit and every chat you have can be logged and stored for deeper inspection. Most people believe that if they aren’t doing anything wrong, no one would be interested in what they are doing.

Sadly, between your ISP and various government agencies (big brother) there are a lot of eyes on your every move.

One of the benefits of using a VPN is that it can encrypt your traffic and actions online, making it next to impossible for your data to fall into the wrong hands. But what if your VPN provider is compelled to give over your data to the government. Since they are the one encrypting it, they also have the ciphers to decrypt it. 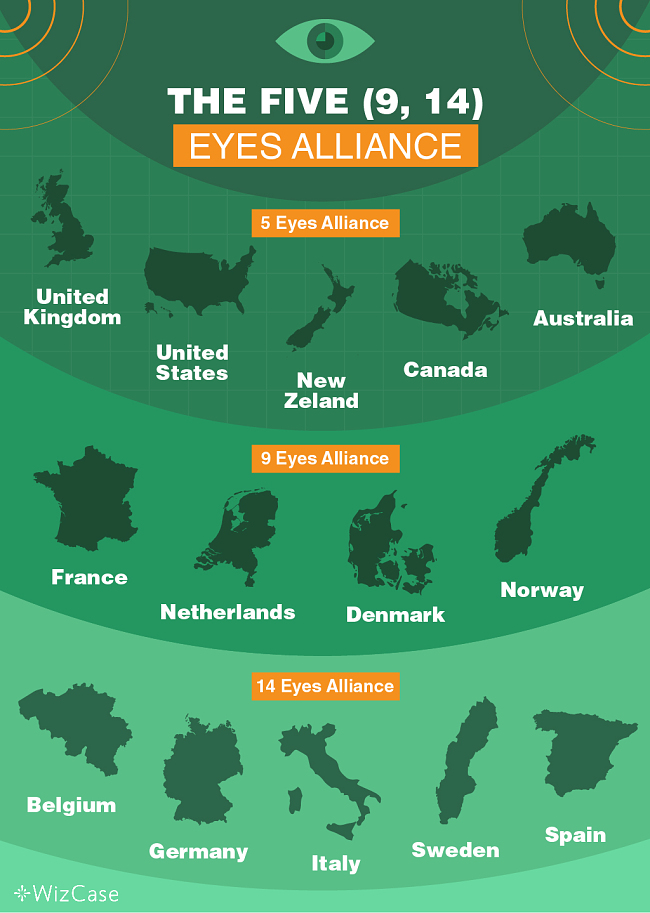 We keep hearing phrases like “5 Eyes,” “9 Eyes,” and “14 Eyes” especially as we discuss VPNs. So, what do they mean? While it sounds like the name of the magician coalition, it is really an international surveillance alliance. They represent different countries across the world and work together to gather and share all mass surveillance information. In simpler terms, they act as one global ‘spying’ entity which watches and keeps records of all your activities.

In this detailed guide, we’ll carefully explain all these surveillance alliance systems. We know that they are a crucial factor when picking a suitable VPN service!

Does a VPN’s Jurisdiction Matter?

It’s quite difficult to determine the amount of influence a VPN’s jurisdiction has on your data and privacy. After all, these surveillance alliances operate worldwide, monitoring our rate of interactions. Therefore, although many people might tell you to look for an “offshore” VPN service, this might not be the ‘silver lining’ you’re searching for.

We recently discovered that the US authorities directed PureVPN, a ‘no logs’ VPN from Hong Kong, to hand over all of a user’s data so that they may arrest and later prosecute the person. What’s quite shocking is that all this took place in country that isn’t part of the 5/9/14 Eyes and with a VPN that promises to keep its clients ‘invisible!”

Stories like these prove that the no logs advertising and marketing strategy does not always show the reality of matters. While it is advisable to stick with VPN that are located in places like Panama and the British Virgin Islands, very pro privacy locations that won’t buckle to the demands of other government agencies, take a few minutes to read through the privacy policy and real user reviews before making any purchases

The Best VPN Service Located Outside the 14 Eyes

The majority of VPNs are based in the 14 Eye countries, specifically within the United States. But that doesn’t mean that you have to compromise your privacy. Here are 5 VPNs that don’t store logs and are located in countries that have no affiliation with these 14 eyes.

Here, we’ve put together a list of VPN services in each of the 14 Eyes Countries. Take a look!

Here are VPNs we found in the 14 Eyes countries:

This alliance has a fascinating history which dates all the way back to World War 2 and the UKUSA agreement. This act created an official partnership between the United States and the United Kingdom for sharing vital intelligence. It continued throughout the unpredictable cold war and grew stronger following the never ending  “War on Terror.”

Now, here are the five countries which work hand in hand, collecting and recording all your activities:

It’s not surprising that some of these countries are also the most notorious for abusing your online privacy. Do you remember Edward Snowden? He exposed the illegal spying activities of the United States together with its allies back in 2013. This renewed the focus on the credibility of this alliance.

Another disadvantage of choosing a VPN in these five eyes countries is that your data is never really kept private. This is because they force all companies to forward user data. In fact, the situation is quite severe in the United States where authorities use gag orders to demand such information.

Countries in this surveillance alliance include all the five eyes nations plus:

These countries participate in different ways. For instance, Denmark gave the NSA the license to install fiber-optic cables entering and leaving the country. In return, the NSA provided the Danish intelligence access to all its technology and hardware. All in all, these countries as well as the first five are all nations you should avoid when selecting a VPN!

The 14 Eyes Surveillance nations include the previous nine plus:

The official title of this alliance is SIGINT Seniors Europe (SSEUR). It was created to extend the recording and sharing of data to these countries.

You now have all you need when it comes to understanding the five, nine and 14 eyes countries and VPN jurisdiction. It’s also worth noting that the United States has the largest number of VPN services in the world.

However, we highly recommend that you pick a VPN provider outside these alliances for better protection and privacy. After all, you don’t want someone ‘spying’ on you as you surf through the internet, right?