10 Ways To Improve Your Internet Speeds With A VPN

It is normal for there to a be a drop in your internet speeds when connected to a VPN. This is because your data has to go through a secure VPN tunnel and it takes a little longer. This doesn’t mean that you have to settle for slow internet speeds like we suffered through back in the days of dial-up.

If your internet is running slow, before you curse out your VPN, try these 10 tips and we’re pretty confident that they will solve most common VPN related slowdowns. If not, we do have some more advanced techniques at the end of the article. 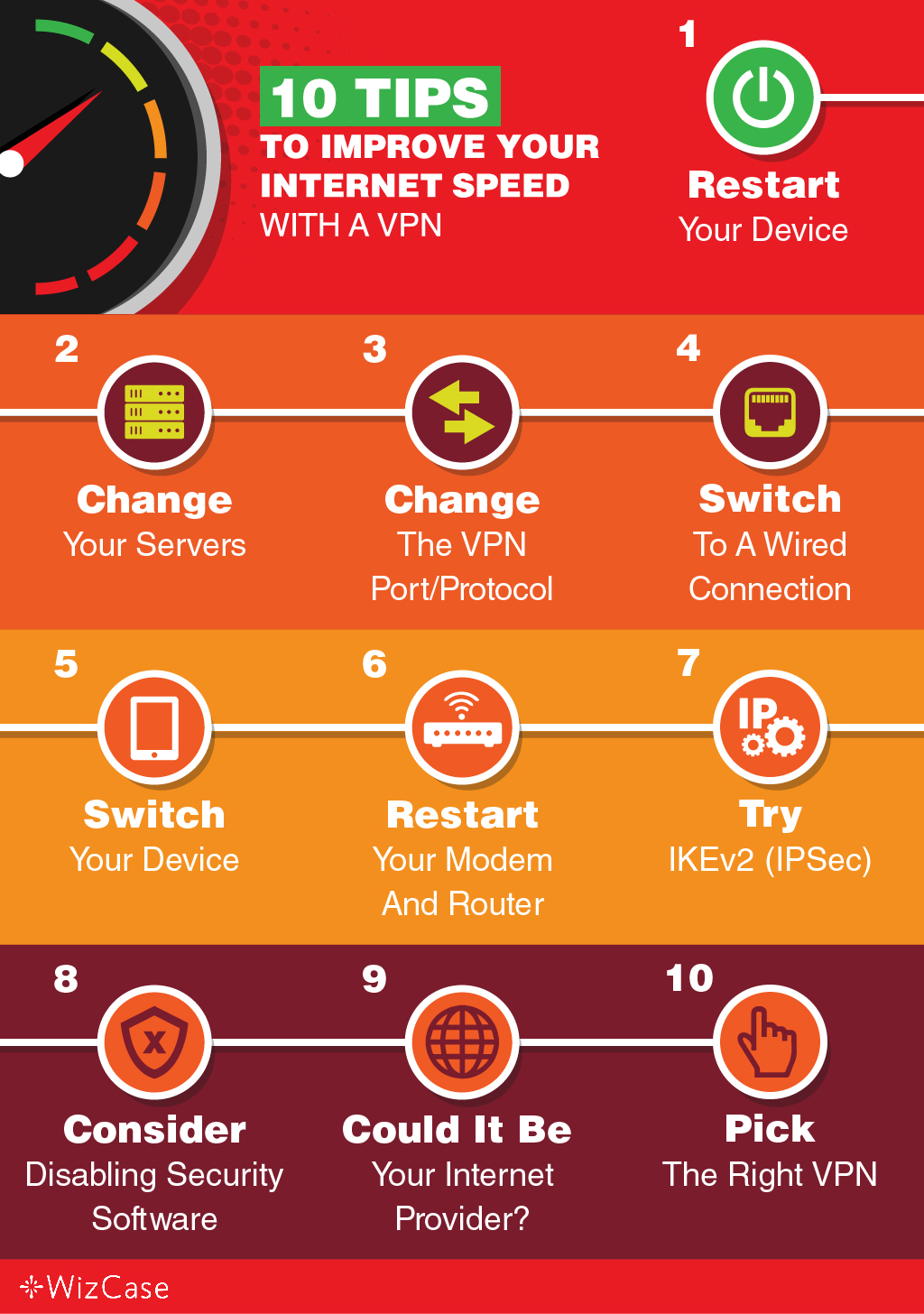 What’s the first solution to every computer problem? Restart the device!
It’s not uncommon for your system to experience slowness from running too many resources or having a lack of memory. Sometimes, a quick restart is all you need to boast that speed.

By selecting a server that is located closer to you, it’s possible to speed up the connection. Usually, this change results in an increase in performance.
Another reason why changing your server is helpful, is to avoid congestion issues on that connection. Go through the list of servers that your provider offers, and see if there is one closer to you.

VPN software uses a specific port number to connect to the servers (i.e., 443). They also utilize a particular protocol like TCP or UDP.

Sometimes, networks restrict speeds of some protocols or ports. You could change these until you determine the fast combination for your software.

4 Switch To A Wired Connection

It’s possible that your wireless internet connection is slowing you down. This happens because they rely on using a shared channel which transmits data between numerous devices. This increases the latency and slows down your speeds.

Some devices can’t handle high-speed internet. The VPN uses heavy encryption which requires a lot of resources. Some routers, old Android devices, NAS, or earlier-generation iOS devices might be the culprit.

If you are unsure, try out the VPN connection on another device to see how it runs. You may be surprised.

6 Restart Your Modem And Router

Your modem and router begin to slow down over time. Most of the cause is due to memory leaks, so a simple restart should be all that is needed to boost the speed.

When the speed in your modem and router are optimal, so is your VPN connection.

Sometimes, the OpenVPN connection is throttled or restricted. By using an IKEv2, you might receive a faster connection.

We aren’t suggesting going down this route long-term, but it’s useful for diagnosing the issue. Antivirus software and firewalls are notorious for slowing down VPN traffic because they are scanning and filtering the outgoing packets.

Temporarily disable the software and see how it runs. If you find that this is the cause of your slower speeds, you might want to consider other options.

9 Check With Your Internet Service Provider

If you’ve made the necessary changes, but are still experiencing issues, it might be that you are having trouble with your internet service provider. Use the VPN from another location like a local coffee shop or your neighbor’s house. Measure the speed with this new connection to see if this is something that you need to address with your ISP.

We can’t stress enough how important it is to pick the best VPN for you. Using a free VPN is not your best option if speed is a concern of yours. Free VPNs can slow your connection even more than VPNs with subscription fees.

You must purchase a VPN that’s known for high-speed quality if you want it to be fast. It also helps if you pick a VPN that offers lots of server locations, so you’ll have a wide selection to choose from. Below, we have a list strongly recommended VPNs and its some of its features:

If you’ve gone through all the steps, we’ve outlined, and you still aren’t seeing any improvement, we have a few other things you can try.

Reasons a VPN Can Decrease Speed

The Internet consists of a dynamic network that routes data packets between all the devices across the world. When the routing fails, specific routes along the path become unavailable.  This causes the traffic to be rerouted or detoured through an alternate way.

Think of it as a highway. You are traveling at high speeds, and then a crash occurs. This causes you to come to a complete halt and making you find an alternative route to get to your destination.  This car accident not only affected you but hundreds of other drivers making heavy congestion build upon these alternative routes.

This car accident scenario is precisely what happens to users connected to the internet. While on the internet, speed issues usually are only temporary as the rerouting occurs. Most of the time, these speed issues are resolved quickly and automatically as the traffic is optimized.

The truth behind how fast your VPN connection can be, relies on your Internet connection speeds. It cannot run any faster than your Internet currently runs. When you use a VPN, you can expect to lose a small amount of speed due to the VPN traffic being rerouted, and the data being sent from you being encrypted. With that said, the measures taken to give you privacy and security should minimally affect your internet speed loss.

You Don’t Have To Sacrifice Speed For Security!

In the world of VPNs, it’s not uncommon to hit periods of slower speeds. It’s no secret that a VPN might slow down your connection, but now you have the necessary informational tools that will help improve speed!

Take the steps that we’ve outlined and increase the speed of your connection. With the right VPN service, a high-quality network setup, and up-to-date hardware, you might even find that you don’t notice a difference in speeds from your regular connection to your VPN.