8.5
Good!
Visit PureVPN Website Visit Site
IPVanish and PureVPN are two of the more well-known VPNs out there, and both have had their issues with keeping logs. Still, IPVanish now claims to keep none whatsoever.

IPVanish does have some additional advantages than just this major fact, however. While both VPNs have top-tier AES encryption, and similar protocol options (OpenVPN, PPTP, L2TP,) a kill switch, and DNS leak protection, IPVanish performs better, and has a better sense of usability. But is it that much better than PureVPN? Let’s take a look. More Info

At first glance, it may seem like IPVanish has the clear edge in nearly every important aspect, but this does not mean PureVPN is a slouch, it’s just that IPVanish is a little more refined. PureVPN’s handful of features may be more useful to certain users however, such as split tunneling, different modes for video streaming, and so on.

IPVanish and PureVPN’s speeds are nothing to get overly excited about but they aren’t bad either. PureVPN has decent speeds, but IPVanish is a little better. If you are planning on doing a lot of streaming, either one will work well, avoiding any annoying buffering, or causing large file downloads to lag too much.

PureVPN offers 750+ servers in over 140 countries, so you have numerous options when it comes to locations. IPVanish has servers in 60 countries, often with several different cities to choose from, so while the actual country amount is lower, you still have a solid amount of locations.

PureVPN is one of the best for customer support, offering a 24/7 chat, email responses, a large knowledge base, and plenty of tutorials. With that said, IPVanish is not far behind, offering all of these options, and often just as quick and helpful in resolving issues. 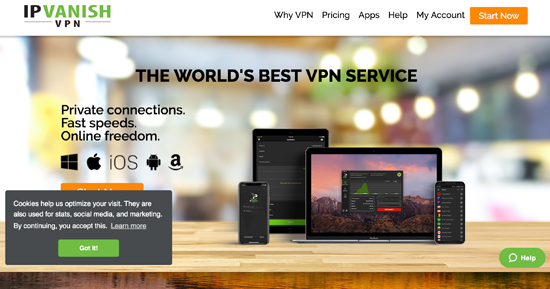 If you sign up before you download the software, the site determines which is the best option for the machine you are using. You can use up to 10 devices simultaneously (a very high amount,) so you can always go back and choose the correct application for other devices later.

There aren’t many settings to adjust, so those who aren’t technically savvy should find IPVanish simple to use. We liked that we could choose our server. If one ran slow, we could switch servers without having to disconnect from the VPN first.

Sadly, at this time there are no servers that allow you to stream Hulu due to proxy settings within Hulu itself. However, when we tried Netflix, we found that we could access it from not just any US based server, but also from London and Glasgow servers in the UK. HBO and ESPN can be unblocked as well, and IPVanish works in China.
Visit IPVanish VPN Website

PureVPN and IPVanish are evenly matched in many categories, but IPVanish is the best choice due to its faster speeds, ease of use, and sheer number of connections offered for the price. PureVPN is certainly a solid choice, but IPVanish works better from the start, and has just enough helpful added features. The server map is easy to navigate, and the menus are self-explanatory as well, so this VPN is good for beginners and experts alike. More Info
OR