How to Watch House of Cards Season 6 From Anywhere

Don’t miss out on streaming season 6 of House of Cards because you live in a country where Netflix isn’t airing the show.  The season is set to release on November 2 but there are several countries that, for some reason (probably licensing), Netflix will geo block the show.

How to Watch Season 6 of House of Cards

Finding the Best VPN to Watch House of Cards Season 6

If you want to watch bypass geo-blocked shows and watch American Netflix, it’s essential that you get a VPN provider that provides the following:

With a VPN, you change your IP address which tricks Netflix into believing you live in a different location. This opens up access to the online content so you can start streaming.

We’ve been able to narrow down the top three VPNs to Watch House of Cards Season 6.

ExpressVPN is our top choice for streaming House of Cards. They have some of the fastest servers around and provide high-quality customer service. There’s also a 30-day money-back guarantee which gives users additional peace of mind with the purchase.

While ExpressVPN is slightly more expensive than comparable premium services, the fast speeds and excellent support make it worth every penny.

NordVPN is neck-and-neck with ExpressVPN for the best Netflix VPN. In fact, you’ll see from most of our articles, that these two services often take the top spots.

They currently have more than 5,000 servers located in over 60 countries, but that number seems to grow every day. In addition, Nord employs standard security protocols to keep you safe from harm while online

In addition to getting you access to US and UK Netflix, CyberGhost VPN comes with advanced features which block ads, malicious content, and online tracking.

Plus, the company keeps no logs about what you do and offers unlimited bandwidth. You’ll have access to an automatic kill switch, DNS leak protection, 256-bit encryption, and allows seven simultaneous connections.

What’s Going on in House of Cards Season 6? 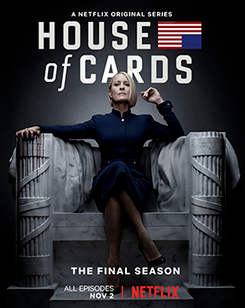 After season 5, the lead star, Kevin Spacey was dismissed. During that time, it was unsure what was going to become of the show. After dealing with the controversy over his sexual abuse allegations, Netflix decided to run the final season without him.

If you remember from the end finale of season 5, the Declaration of War Committee was scrutinizing Frank and he faced investigation for the death of Zoe Barnes. To handle this, he resigns as president during season 5. At that time, Claire assumed the presidency and began leading the operation to take down Yusuf Al-Ahmadi. Frank requests a pardon from Claire, and she agrees. In return, she tells him that he must leave the White House and make it appear that the two of them are estranged.

When Claire addresses the television viewers, she informs the public that Ahmadi was killed, but doesn’t talk about the pardon as promised. Frank calls her for an explanation, but Claire rejected the call. In the teaser for the new season, there’s a long walk to the Oval Office and it leaves off with Claire stating, “We’re just getting started.”

With the best VPN, you’ll have no problem watching House of Cards Season 6 from anywhere. Prepare to start binge-watching this November. In the meantime, you can rewatch the previous seasons to ensure that you’re ready for what’s to come.