Since 2015, audiences around the world have thrilled to the CGI superhero series Miraculous: Tales of Ladybug & Cat Noir. 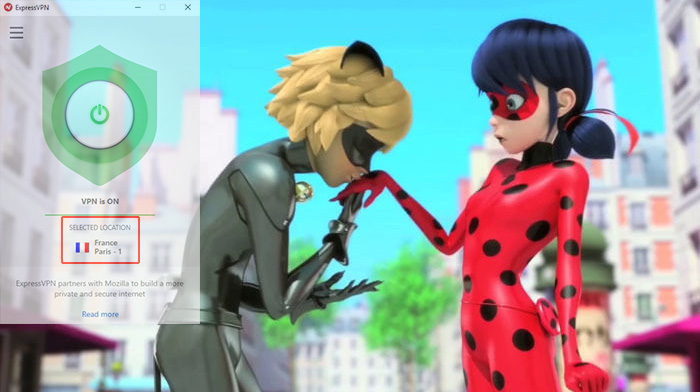 Three seasons of episodes are already out, with more planned in the upcoming years. While the animated series is shown in Korea, UK, France, and the US, the rest of the world cannot view it legally. With US-based Netflix buying the US rights to the show, it will become even more difficult to view it in the future.

If you want to watch previous episodes of Miraculous: Tales of Ladybug & Cat Noir, you’ll need a membership to one of the networks that shows it. Those are limited to Netflix in the US, TF1 in France, EBS1 in South Korea, and Disney Channel UK in the UK. The problem is that all of those networks are geo-blocked, meaning if you aren’t in that country, you cannot access the television network’s website and streaming services.

The only way around this block is to employ a virtual private network (VPN) to emulate having an active Internet connection in either the UK, US, South Korea, or France.

A VPN allows you to use a remote server to access websites that are geo-blocked from your current location. It acts by connecting your Internet-capable device to a remote server located in one of the countries where downloading episodes of Miraculous: Tales of Ladybug & Cat Noir is not restricted.

The VPN will create a secure connection between your device and the remote server. Everything that passes through that ‘tunnel’, either to the remote server or to your device, is heavily encrypted, to the point where any third party, be it an ISP, hacker, or government watchdog organization, cannot view the information you are sending and receiving.

The data packets trace back to the remote server, which encrypts them and sends them through the VPN connection back to your computer for decryption and your enjoyment.

How can I use a VPN to watch episodes of Miraculous: Tales of Ladybug & Cat Noir?

Speed and reliable connections are the two biggest needs for someone watching Miraculous: Tales of Ladybug & Cat Noir through a VPN. There are plenty of VPNs that fill the bill, but the best choices are ones based in countries streaming the show that have low latency. Latency refers to the amount of physical distance between your location and that of the remote server.

For instance, if you’re located in Germany, finding a remote server in France would be your best bet for finding a low-latency VPN.

ExpressVPN routinely earns high marks for its lightning-quick speeds. Based in the British Virgin Islands, it has servers in 94 countries and unlimited bandwidth and server switches. The price tag is high, but if you take advantage of ExpressVPN’s generous 30-day, money-back guarantee to binge watch the entire series before the deal runs out.

NordVPN is a top choice for all-around service in the VPN game, thanks in large part to having more than 4,400 servers spread across 60 countries. NordVPN also has AES 256-bit encryptions and Double VPN tunneling for secure browsing.

VyprVPN originated in Switzerland and boasts of unlimited bandwidth, zero-knowledge DNS, and 25-bit AES encryption. It has an additional firewall to protect users and has more than 700 servers and 200,000 IP addresses available for use in more than 70 locations.