Watch Harry Potter on Netflix in 2021 From Anywhere (Tip: Do This First)

I’m a massive Harry Potter fan. So I was really annoyed when they removed the movies from my local Netflix library in Australia. After testing different Netflix libraries, I found that many countries (such as Netflix France, Belgium, Canada, and Mexico) also saw some — or all — of the movies being removed from their catalogs.

The only Netflix libraries that still have all 8 Harry Potter movies are Spain and Portugal.

If you’re not in those Netflix countries — don’t worry. I’ve listed 3 simple steps below to help you access the Harry Potter movies from anywhere in the world. All you need is a VPN to bypass Netflix’s geo-blocks.

Many premium VPNs I tested failed to unblock Harry Potter on Netflix — only the 3 VPNs listed below worked for me. My top choice for reliability and fast speeds is NordVPN, which you can try for free for 30 days.

Tip: You can check your IP address here to make sure you’re connected to a server in Spain or Portugal to watch Harry Potter.

NordVPN is my #1 choice because its SmartPlay technology consistently connected me to servers that were able to bypass Netflix geo-blocks. I tested 10 Portuguese and 10 Spanish servers at random and they all allowed me to access Netflix and watch Harry Potter every time. At first, I was worried that SmartPlay would be complicated to activate — but there was really nothing to worry about as it’s built into the app! All I had to do was click on “Spain” on the map interface and I was connected to the fastest server available. I was able to stream Harry Potter and the Deathly Hallows in minutes and did not have to manually select different servers to find the fastest one (as I did with some other VPNs). 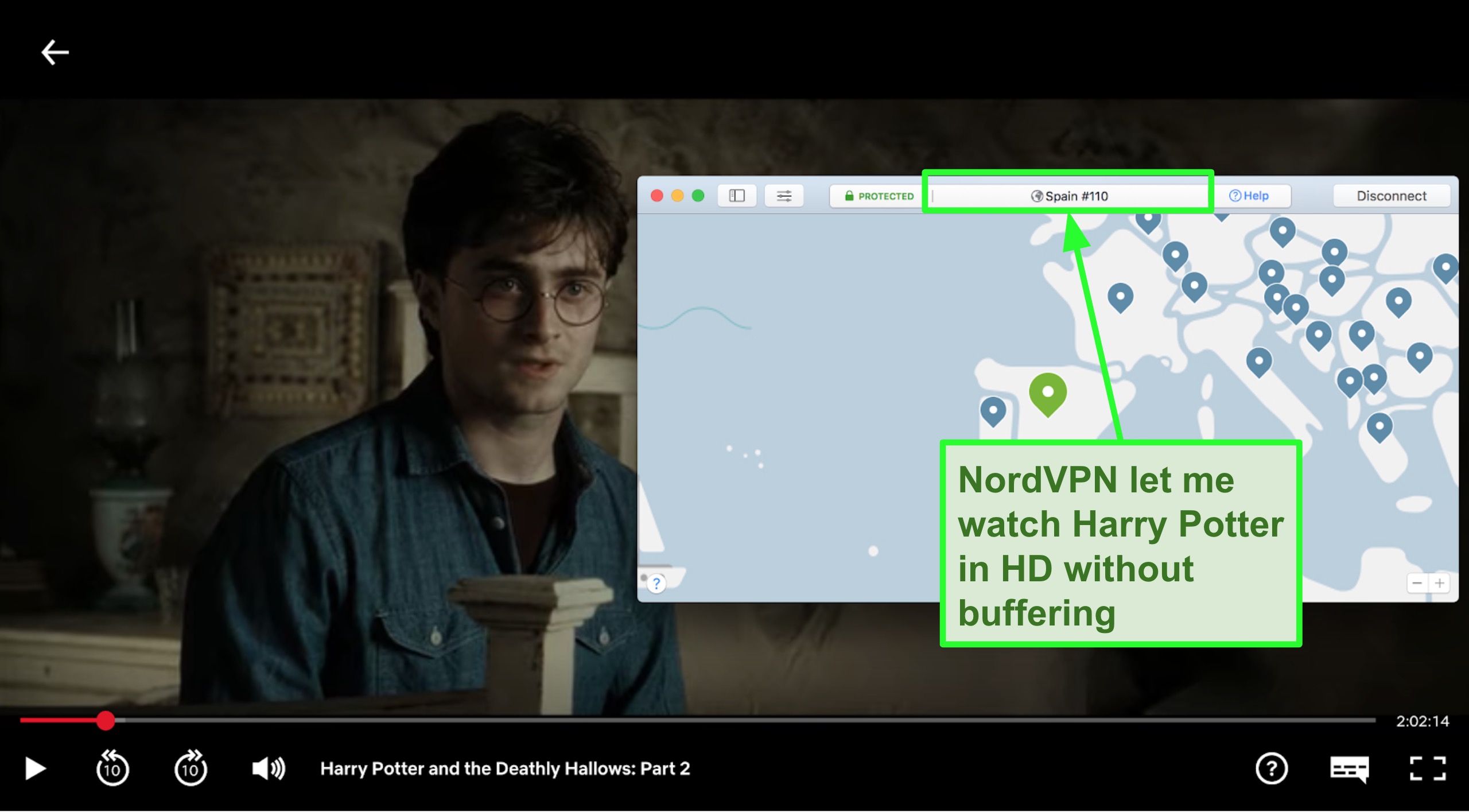 When I tested NordVPN, I found it had one of the fastest streaming speeds because it does not limit bandwidth or data. I watched Harry Potter and the Deathly Hallows in HD and didn’t experience any lag or buffering. Additionally, slow connection speeds due to overcrowding was never an issue because NordVPN has so many servers. Even when I tried watching the movies during peak hours, it still had the same clear streaming quality.

NordVPN also allows simultaneous connections of up to 6 devices. So you don’t have to worry if you have multiple people in your household who want to watch different Harry Potter movies at the same time. That means no arguing about which movie to stream!

You can try NordVPN for free with its 30-day money-back guarantee. If you don’t like the service, just cancel your subscription and you’ll get a full refund. NordVPN’s purchase and refund processes are easy (I got my money back within 5 days) and its 24/7 customer support will answer any questions you have. Note that this offer is only valid when you purchase your subscription directly through the NordVPN website. If you buy it through other retailers like iTunes or Microsoft store, they may not have the same guarantee.

Bypassing Netflix’s geo-block was easy with Cyberghost. I simply selected “Portugal” from their list of countries and was immediately connected to the fastest available server. I watched Harry Potter and the Half-Blood Prince in HD with no lag or buffering. 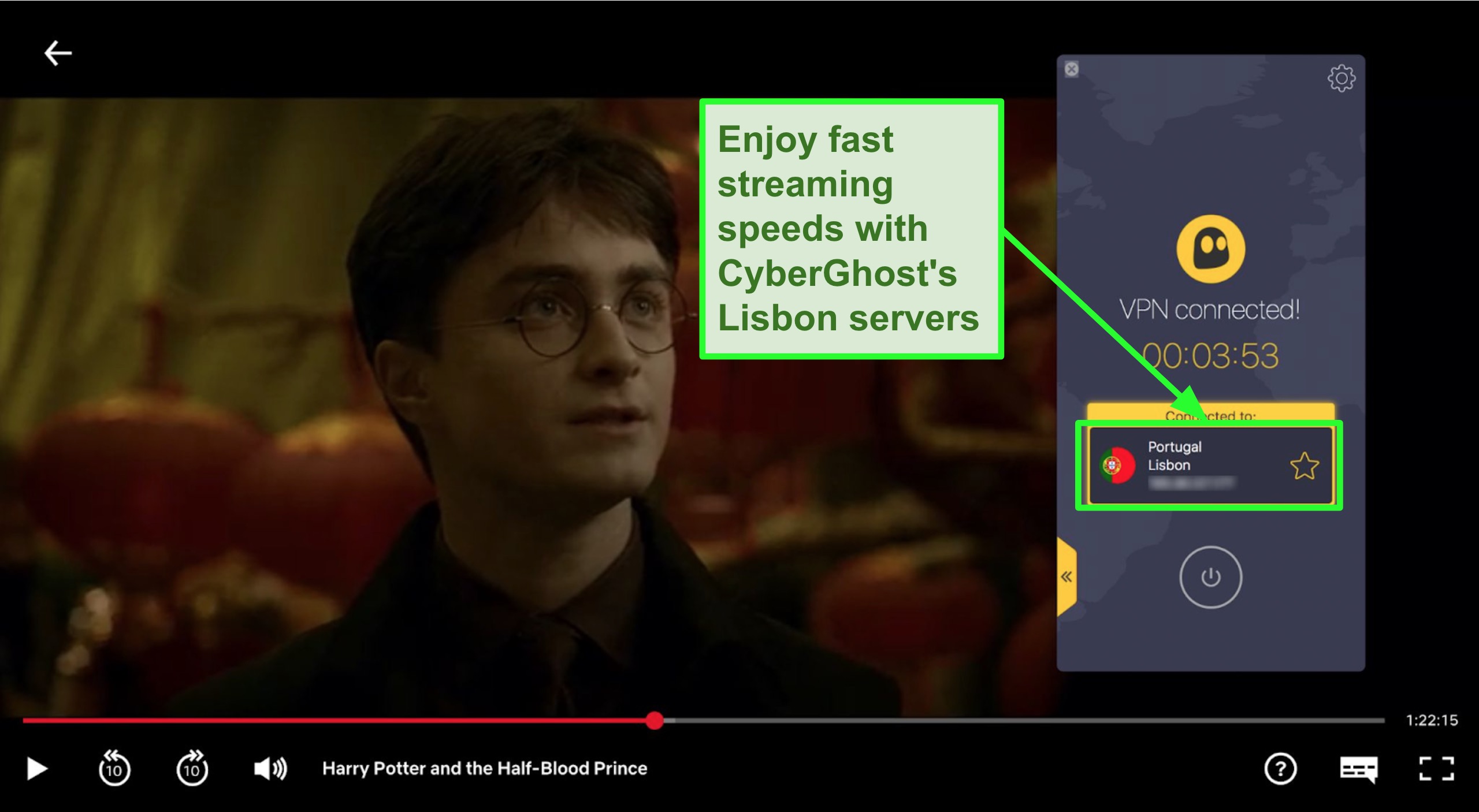 Another great CyberGhost feature is that it allows you to connect up to 7 devices at the same time with one subscription. I could conveniently switch between my laptop and tablet if I wanted to watch Harry Potter on different devices. It’s really annoying when VPNs only connect 1 or 2 devices and force you to log out before adding new devices. So I was really happy that CyberGhost was hassle-free.

One slight drawback is that CyberGhost is not able to bypass the Netflix Spain geo-blocks. But since they have plenty of servers in Portugal and I didn’t experience any streaming interruptions, I still think CyberGhost is a great option for watching Harry Potter.

You can try CyberGhost and stream Harry Potter movies for 45 days risk-free with its money-back guarantee. That’s longer than the average 30-day period for most VPNs! If you don’t like the service, just contact customer support and they will process your refund for you, no questions asked. I tested their money-back guarantee and managed to get a full refund in 5 days. 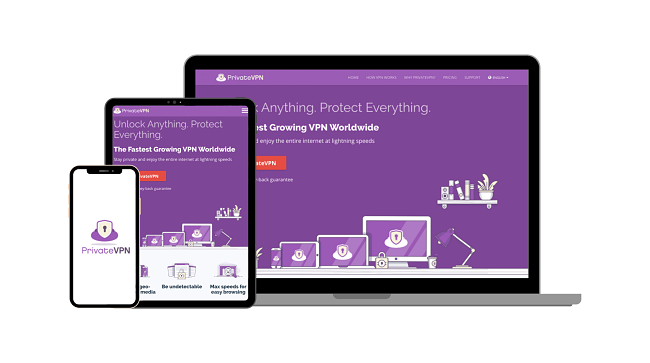 I was skeptical of whether a smaller VPN like this one would be able to let me watch Harry Potter from anywhere. After testing it out, I was pleasantly surprised to find that PrivateVPN could access both Netflix Portugal and Spain! Even though it only has 1 server in each country, I did not experience any issues with connecting to either of them. 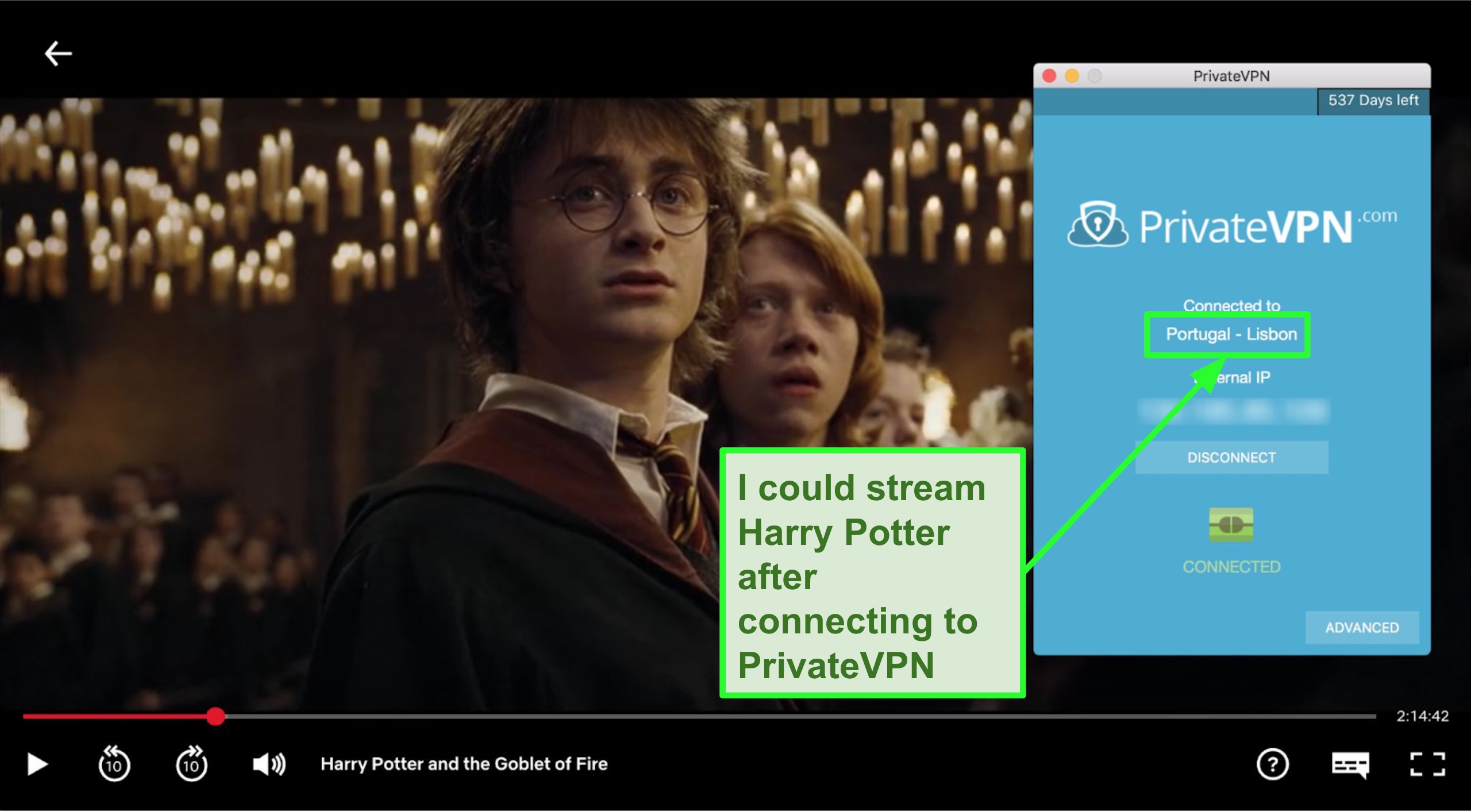 Unfortunately, streaming was slow when I tried to watch Harry Potter and the Goblet of Fire during peak hours (after work and weekends). I experienced long buffering times of up to 20 seconds which was really annoying. When I watched it during off-peak hours, there was much less lag and I found it acceptable. If you want a smooth streaming experience with no hassle, I’d still recommend NordVPN as its server options and speeds are the best.

If you’re planning on streaming geo-blocked content from China, PrivateVPN will be a good choice for you. During my tests, I found that it’s one of the few VPNs to work consistently and have decent streaming speeds in China. It’s military-grade encryption and a strict no-log policy will also ensure that your traffic is kept secure so you don’t face unnecessary trouble with Chinese surveillance.

You can use PrivateVPN’s 30-day money-back guarantee for a zero-risk way to try the VPN. I contacted their customer service on live chat and asked for a refund. It was quickly processed and I got my money back within a week.

Stream All 8 Harry Potter Movies for Free With This Trick

I’ve got a sneaky tip for you that will let you watch the entire Harry Potter movie series for free.

You can use one of the recommended VPNs’ 30-day money-back guarantee together with Netflix’s 30-day free trial for new users. If you combine these offers, you’ll be able to watch the entire Harry Potter series over the course of 1 month for free. If you’re as big of a Potter fan as me, that sounds like a great deal.

If you still have time left on your free trials, you can even use NordVPN to change your virtual location and stream content from many other platforms (e.g. Disney+, Hulu, BBC iPlayer).

If you’re ready to get a VPN, take advantage of these deals to save on your subscription. Some are limited offers so do check out these deals to see if they’re still available:

🤓 Why do I need a VPN to watch Harry Potter?

Only Netflix Spain and Portugal have the rights to stream all 8 Harry Potter movies. If you’re not in either of those countries, Netflix will block you from streaming the film.

A VPN helps to connect your computer to a remote server while hiding your actual IP address location. So if you’ve connected to a Spanish server to watch Harry Potter, Netflix will assume you’re in Spain even though you’re somewhere else.

🤑 Can I use a free VPN to watch Harry Potter on Netflix?

Technically yes — but I wouldn’t recommend it.

Free VPNs may not cost you anything, but you’ll see that the streaming experience will be frustrating with slow speeds, lag, and connections dropping off. This is because their servers are usually overloaded with too many users.

Using free VPN services is not just annoying because of slow speeds, it can also be dangerous for your online security. Because they do not charge subscription fees, many of them sell user data to advertising companies in order to make money.

If you only need a VPN for a short period, I recommend you try a premium service like NordVPN and take advantage of its money-back guarantee. Simply ask their customer support for a refund before the end of that period, and you’ll be able to use a reputable and reliable service like NordVPN for 30 days for free.

🤩 Which Netflix libraries have the Harry Potter movies?

Apart from Netflix Spain and Portugal, there are other Netflix libraries that have some of the Harry Potter movies:

😎 Which other streaming platforms is Harry Potter available on?

You can also find the Harry Potter movies on:

🙂 In addition to streaming, what else can I use a VPN for?

Aside from accessing Harry Potter on Netflix, you can use a premium VPN to access many other popular streaming sites that may be restricted in your country like Hulu, Amazon Prime Video, BBC iPlayer, and many more.

The IP-masking technology used by VPNs to bypass geo-blocks on streaming sites also has other benefits. It helps to protect your online data by encrypting the information sent from your computer on the internet. That means VPNs can also:

Get a VPN That Works to Enjoy Harry Potter From Anywhere

You don’t have to miss out on the fun and magic of Harry Potter just because you’re outside Portugal or Spain. With a reliable VPN, you can see every minute of the almost 20 hours it takes to watch all the movies!

If you’re not sure which VPN to choose, I recommend you try a reliable service like NordVPN for free for 30 days. Its fast speeds and thousands of servers means you can enjoy every Harry Potter movie with the best streaming experience.

Written By Dawn Teh
Dawn is a cybersecurity content writer. She enjoys updating readers about the latest trends in tech and online security.
This Article contains
Latest articles
Follow our experts