How to Watch HBO Max From Anywhere in 2021

While HBO Max is only available in the US, you don’t have to miss out if you’re living elsewhere. With a VPN, you can stream HBO Max from anywhere in the world.

VPN is short for Virtual Private Network and it allows you to access streaming services that are blocked in your country. It might sound technical and complicated — but it’s actually really simple. I’ll show you how to start streaming HBO Max with a VPN in just 3 easy steps. You’ll be enjoying TV shows and films like Friends, Rick and Morty, and Lord of the Rings in just minutes.

My top choice for watching HBO Max is ExpressVPN. Out of all the leading VPNs on the market, this provider has the fastest speeds for streaming in HD. You can even try ExpressVPN for free with its 30-day money-back guarantee!

Quick Guide: 3 Steps to Watch HBO Max From Outside the US

Why You Need a VPN to Watch HBO Max

HBO Max is only available in the US. If you’re in another country, HBO Max will block you from streaming and you’ll see the below error message on your screen.

HBO Max is not available in your region.

With a VPN, you can change your virtual location to the US. But how does this work?

Every device has an Internet Protocol (IP) address, which reveals your physical location. When you connect to a VPN’s server in the US, you get a US IP address instead — and your real IP address is hidden. You can then trick HBO Max into thinking you’re in the US, even if you’re actually in another country.

My top VPN recommendation for HBO Max is ExpressVPN. Even though I’m in Australia, my speeds on ExpressVPN’s US servers are always fast enough for HD streaming.

ExpressVPN is the #1 VPN for watching HBO Max. It’s got excellent streaming speeds and unlimited bandwidth, so you can watch as many TV shows and films as you like.

I tested ExpressVPN’s US servers with HBO Now, Disney+, and Netflix. These streaming services are the trickiest for VPNs to access — but I easily unblocked all of them. This makes me confident that ExpressVPN will have no difficulties with HBO Max. 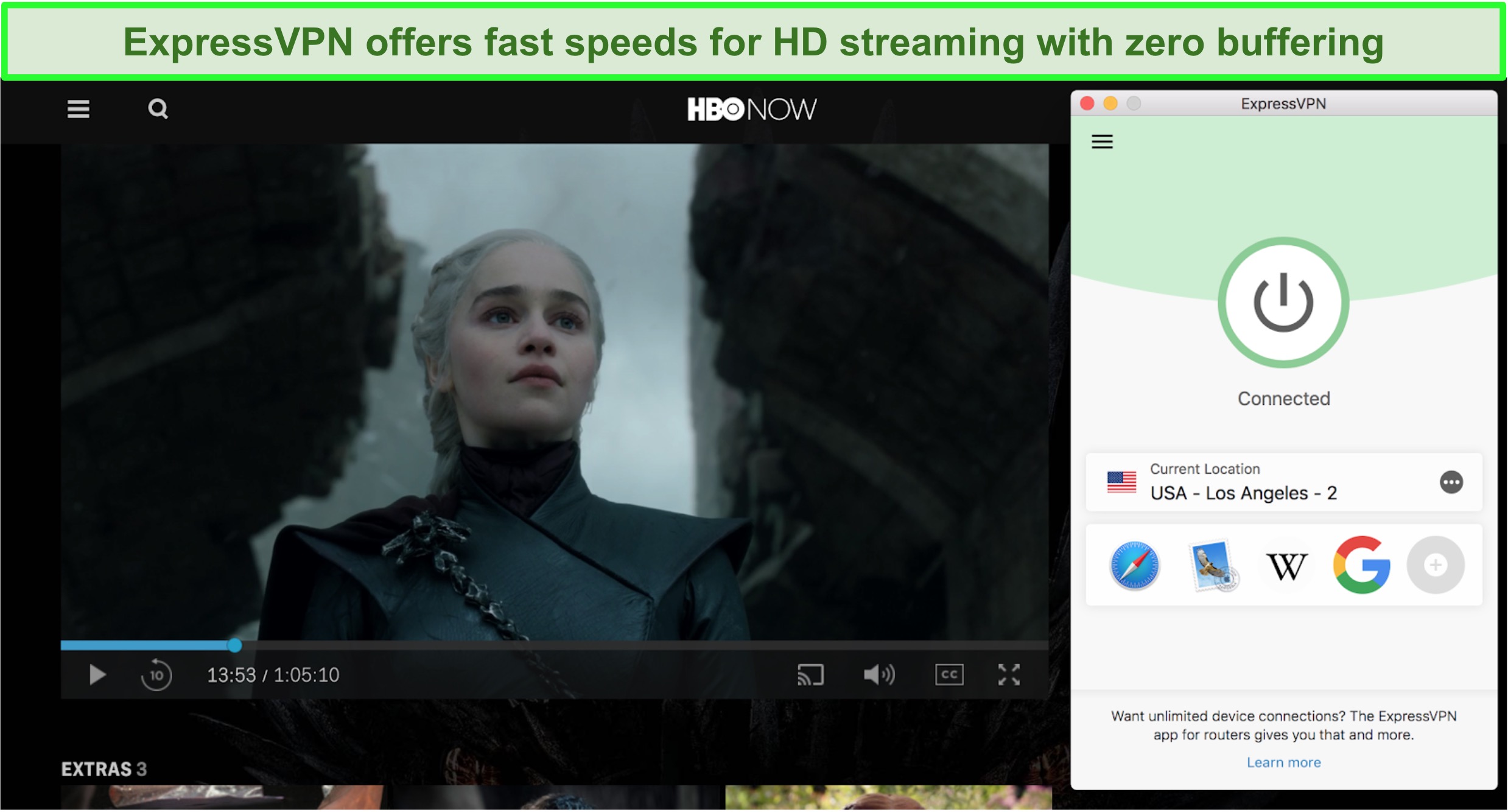 ExpressVPN’s US servers are impressively fast, despite connecting all the way from Australia

During my tests, I enjoyed streaming in HD with zero buffering. My average speed was 18 to 22 Mbps on multiple US servers, which is fast enough for HD video quality! I was especially impressed as I’m located in Australia, which is 15,000km away from US servers on the West Coast. Long distances can often slow down internet speeds, so I was happy to see that ExpressVPN is consistently fast.

It’s easy to find the fastest US server on the ExpressVPN app. All you have to do is search for “United States” in the server list and click on the result — and you’ll be automatically connected to the best available server! I also like the shortcut feature on the app’s homepage, which allows you to add shortcuts for 4 different apps or websites. This means you can launch HBO Max straight after connecting to a US server.

Even better, you can test out every feature with HBO Max before committing to a subscription. All plans have a 30-day money-back guarantee, so you can use ExpressVPN to watch HBO Max from anywhere at no risk to you. If you’re not satisfied, the customer support team is quick to issue a refund — I’ve tested this and gotten my money back in 5 days. 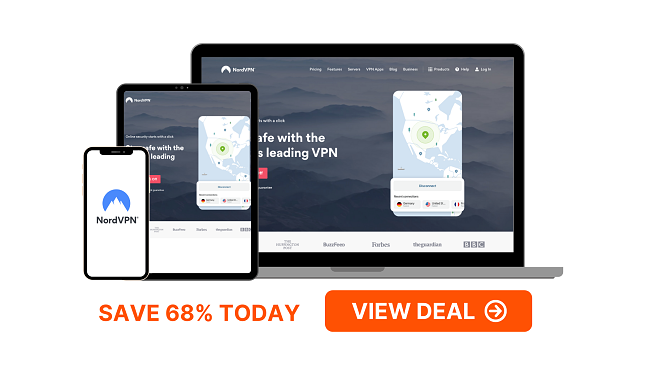 NordVPN has an enormous global server network with 1,800+ servers in the US, so you can always find a fast and reliable connection for streaming HBO Max.

When I tested 10 servers in the US with HBO Now and Netflix, I unblocked both streaming services without a problem. This is a strong indication that NordVPN can bypass any restrictions HBO Max puts in place. Best of all, my streaming quality was always HD with average speeds of 18 Mbps. 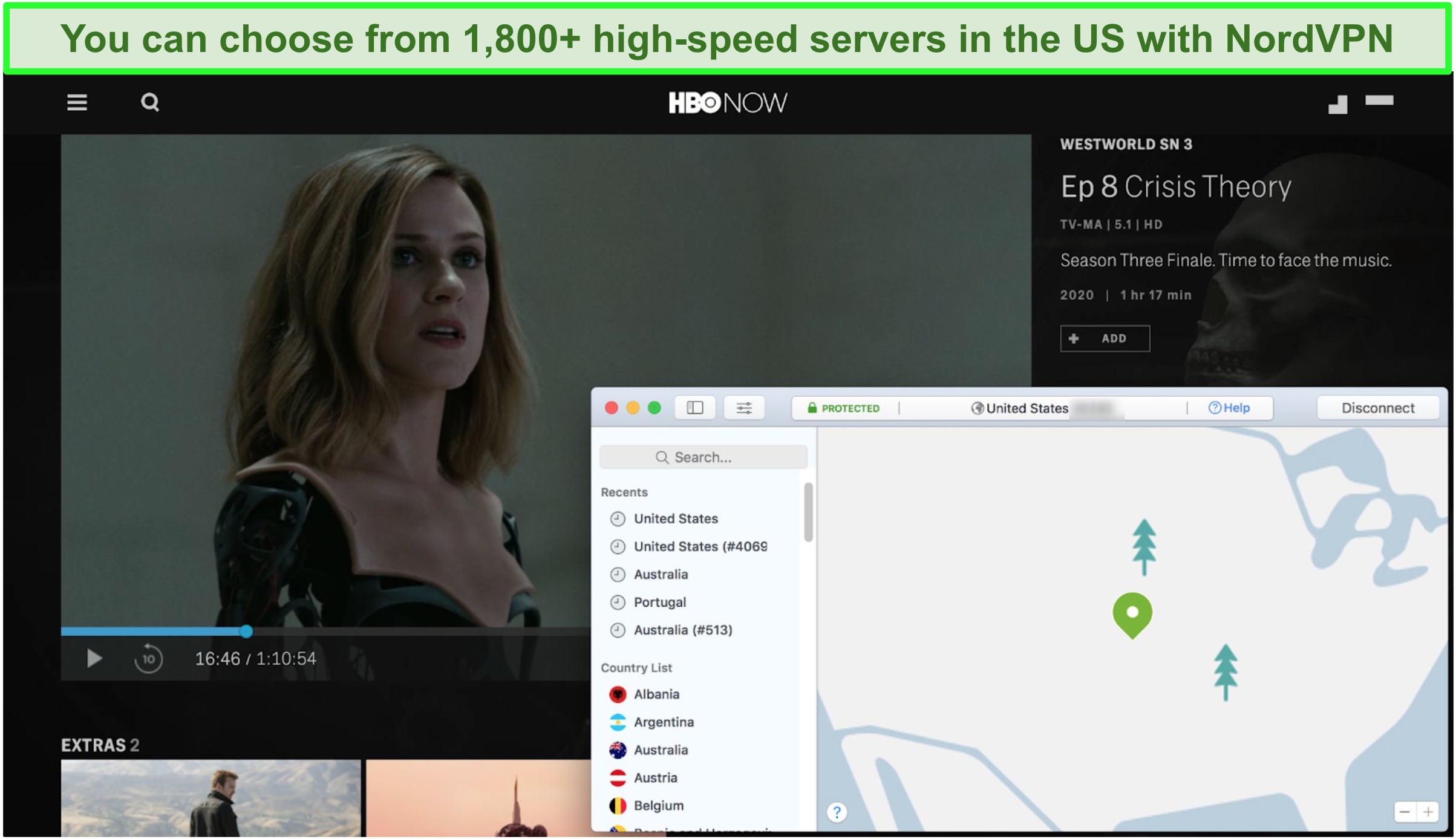 To connect to the best available server in the US, I recommend using the “Quick connect” feature (it’s faster than finding the US location pin on the map). Just type in “United States” in the search bar, right-click on “United States”, and click the “Quick connect” button. You won’t need to manually filter through all 1,800+ servers, which can be quite time-consuming.

You can try NordVPN for 30 days risk-free with the money-back guarantee to see whether NordVPN is the right provider for you. This gives you plenty of time to test every premium feature with HBO Max. Don’t want to continue? Simply contact customer service within 30 days and you’ll get a full refund. 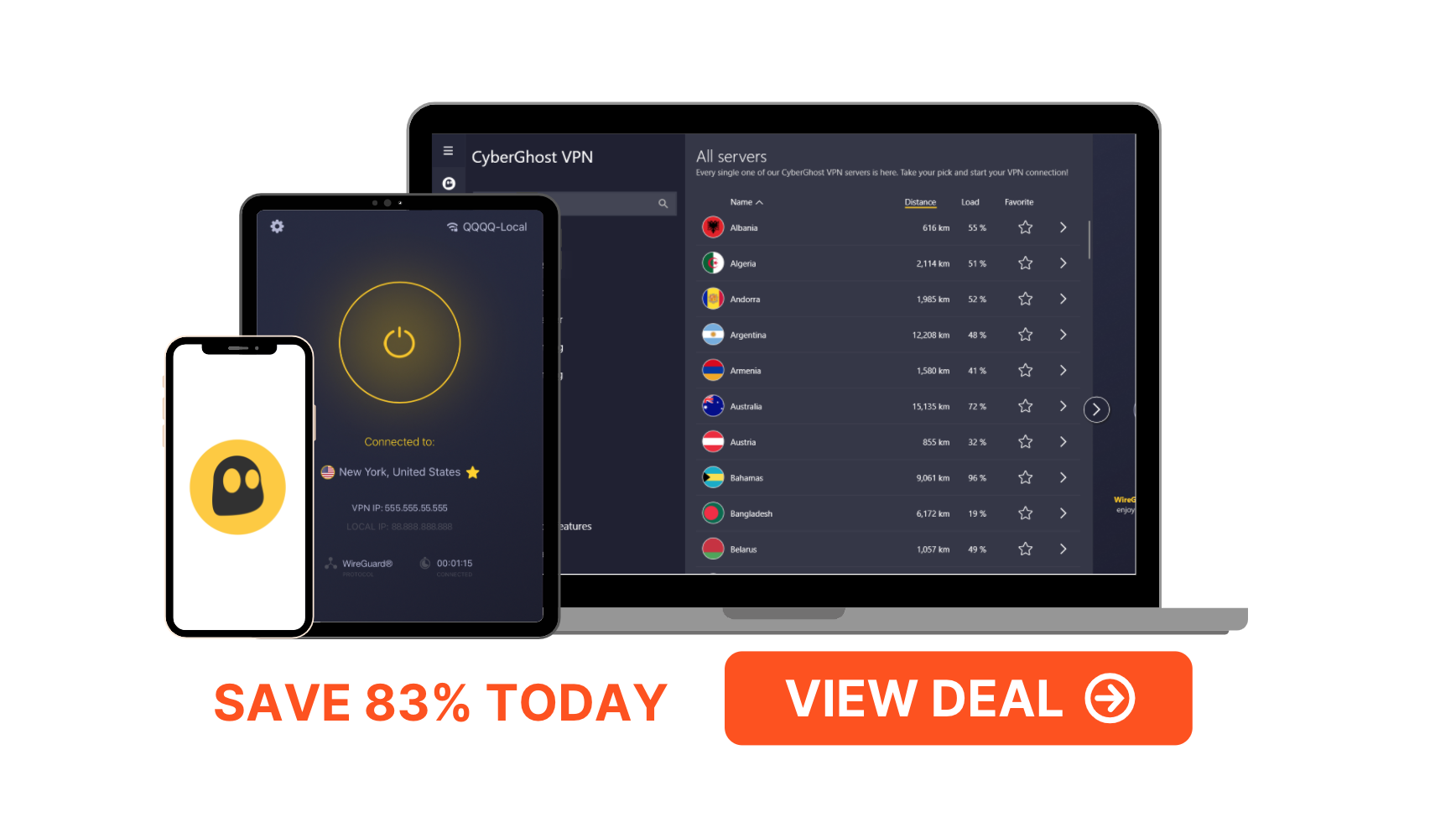 CyberGhost offers US servers optimized for watching HBO. These servers have been automatically configured for fast speeds and smooth connections, so you don’t have to manually set anything up. Just go to the “For streaming” tab in the app and type “HBO” in the search bar.

When I tested the streaming-optimized server for HBO Now, I watched shows in HD with just 4 to 5 seconds of initial buffering. Once my episodes loaded, I didn’t experience any lags or further buffering. 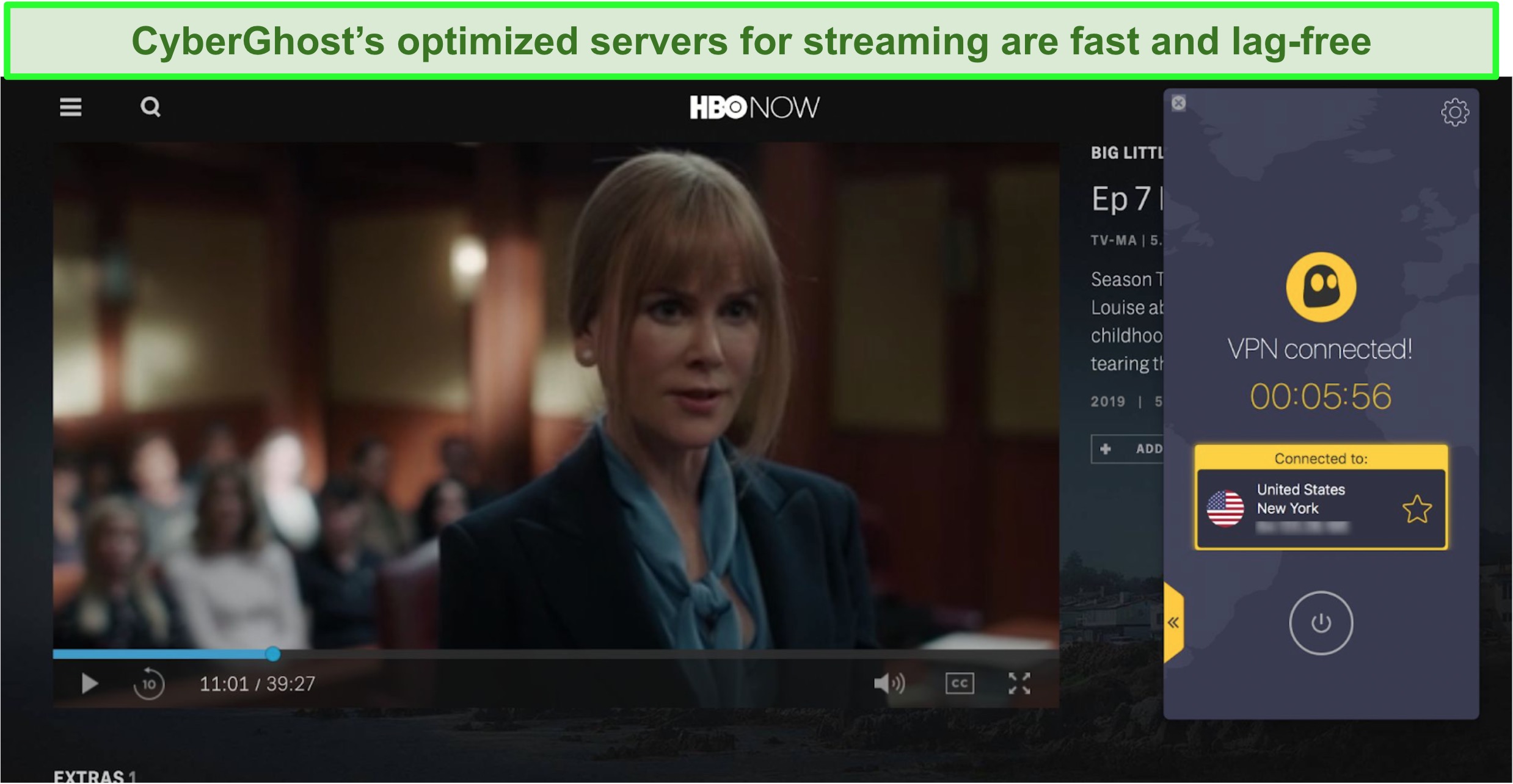 Even if you don’t use an optimized server, fast streaming is always possible with over 1,000 servers in the US to choose from.

Another great perk with CyberGhost is that you can watch HBO Max on up to 7 devices at once. You can even share your subscription with family and friends, so everyone can watch their favorite HBO Max shows on their own device.

Can I Use a Free VPN to Watch HBO Max?

Technically, you can — but I’ve tested the best free VPNs for streaming and I wouldn’t recommend it for HBO Max.

Even though a free VPN sounds like a good deal, you’ll find there’s a lot of hidden pitfalls. My biggest frustration is the slow streaming speeds. Free VPNs have too many people using its small number of servers, which results in frustrating lags, buffering, and connection errors.

What’s more concerning is that free VPNs are dangerous if you care about your online privacy and safety. As there are no subscription fees, many services will sell your personal data to advertisers and corporations in order to make money.

The best (and safest) free option is to use a premium VPN with a money-back guarantee. I suggest ExpressVPN as it’s got excellent streaming speeds, strong security, and a 30-day money-back guarantee. It’s particularly ideal you’re only looking to binge watch a season of your favorite HBO show, or simply to check out HBO Max.

It’s hassle-free to get your money back after you sign up. All you have to do is speak to customer support via the website’s 24/7 live chat feature. I even tested it myself — and my money was fully refunded in just 5 days! 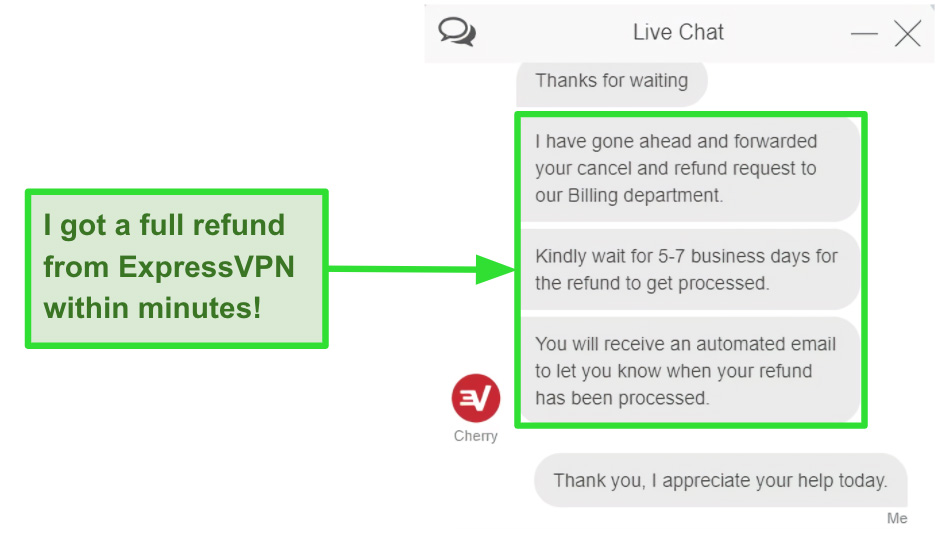 I tested ExpressVPN’s 30-day money-back guarantee — and it worked!

😅 How can I sign up for HBO Max without a US credit card?

HBO Max requires a US credit card to sign up, but here’s a simple workaround you can use instead.

🤩 What shows and movies are on HBO Max? Is the DC Universe included?

Below are the shows and movies confirmed for HBO Max (and you can access them from anywhere in the world with a VPN):

Plus plenty of new releases:

At the moment, it’s unconfirmed whether live TV programming will be available.

With a VPN, you can watch all the above shows and movies on HBO Max regardless of location. My #1 choice for watching HBO Max is ExpressVPN — you can even use it for free for 30 days with the money-back guarantee.

😎 What devices can I watch HBO Max on?

You can stream from HBO Max on browsers and dedicated apps for iOS, Android, Chromecast, Apple TV, and Android TV. ExpressVPN has a native app for all these devices, so you’ll have no issues unblocking HBO Max if you’re streaming from outside the US.

HBO Max and HBO Now are standalone streaming services, whereas HBO Go is only offered through a US cable package or TV provider.

HBO Max includes all content that’s currently available on HBO Now and HBO Go, plus its own original programs. It’s unconfirmed whether or not HBO Max will eventually replace both HBO Now and HBO Go. At the moment, it appears all 3 streaming services will run concurrently.

You can automatically access HBO Max for free if you’ve directly subscribed to HBO Now through the official website, Google Play, or Apple. If you’ve got HBO through AT&T TV, DIRECTV, AT&T U-Verse, Hulu, or Spectrum, you’ll also get access to HBO Max at no extra cost.

There are no updates on other third-party partners yet, like Amazon Prime.

🙃 Will HBO Max be available worldwide?

No specific dates have been announced for the international rollout, although HBO Max is scheduled to launch in Latin America and Europe by the end of the year. If you don’t want to wait, you can follow these 3 easy steps to watch HBO Max from any country.

If you do wait until HBO Max launches in your country, you might potentially be disappointed by the selection of TV shows and movies. Every country will have a different HBO Max library, and I expect HBO Max in the US will ultimately have the largest catalog. This has already been the case for other US-based streaming services, such as Netflix, Disney+, and Amazon Prime Video.

🙂 Can I get HBO Max on Hulu or Amazon Prime?

Yes, for Hulu. If you’ve subscribed to HBO through Hulu, you’ll enjoy automatic access to HBO Max for free.

At the time of writing, HBO hasn’t confirmed any details for Amazon Prime customers.

🤑 How much does HBO Max cost?

While HBO Max is the most expensive streaming service on this list, it’s actually the same price as existing HBO subscriptions. But as a bonus, you’ll get much more content than HBO Now and HBO Go!

Don’t Miss Out on Watching HBO Max — Get a VPN!

With a VPN, you can watch HBO Max from any country and enjoy shows like Friends, Rick and Morty, and more. You can even use a VPN to access other popular streaming services, including Netflix US, Disney+, Hulu, and Amazon Prime Video.

My top choice for streaming HBO Max is ExpressVPN. Its high-speed servers in the US can reliably unblock HBO Max for HD streaming. Best of all, there’s a money-back guarantee for 30 days, so you can try ExpressVPN and stream HBO Max with zero risk. It’s super easy to get a full refund if you change your mind — I’ve even tested it myself and no questions were asked.

Written By Dawn Teh
Dawn is a cybersecurity content writer. She enjoys updating readers about the latest trends in tech and online security.
This Article contains
Latest articles
Follow our experts