When the Soviet Union collapsed in the late 1980s and early 1990s, a lot of new freedoms came to the countries that carved their way out of the mess. One of the best of those things is the Russian Premier League, the top division of professional football in the country.

Originally founded in 1992, it has been rebranded in both 2001 and 2018 and is one of the very best sources of Russian unity and civil pride. That pride extends to Russian citizens who are abroad for either work or for permanent vacations.

But therein lies the rub, as entire league matches are only played on a single television network , Match TV, which has been broadcasting since 2015. If you are located outside of Russia you cannot view Match TV because it is geo-blocked.

The only solution is a virtual private network (VPN).

Match TV is a direct creation from a order by president Vladimir Putin with the help of Gazprom-Media Holding. This is the only place to watch complete matches anywhere in the world. 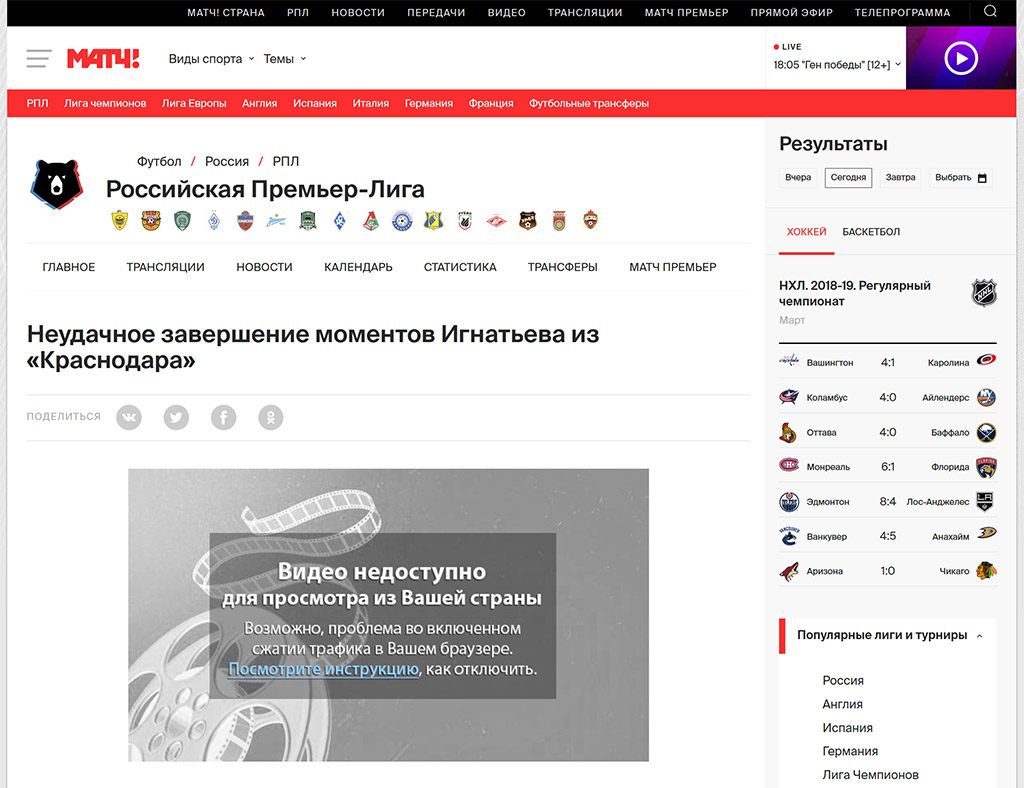 But the Match TV website is geo-blocked so that only Russian IP addresses are accepted for live viewing or streaming.

The success of the league and the diversity of fans of football as well as Russians living abroad has selected stations carrying matches. Countries as far flung as the US, Brazil, Montenegro, and Finland usually carry a match of the week.

How to Use a VPN to Watch Russian Premier League matches

Using a VPN to watch Russian League soccer matches is an easy process to follow:

Russia has one of the most potent defense systems online today, which means you’ll need a top-flight VPN to secure a Russian IP address that works and fools its security protocol.

SaferVPN is a good starting point. Based in privacy-friendly Israel, it has a stern no-log policy and has ceased storing IP addresses as well.

The security check continues with AES-256 encryption for all packages and a kill switch, along with support for both OpenVPN and IKEv2 encryption. SaferVPN has a strong history with unblocking content and has a 30-day money-back guarantee.

ExpressVPN takes the cake as the fastest VPN in the industry, but that’s just the tip of the iceberg. If it was not for all the blazing speed, ExpressVPN would likely be hailed as one of the most secure VPNs around.

Located in the British Virgin Islands, it’s not part of the 5/9/14 Eyes Alliance where countries report on other countries’ privacy questions. Moreover, it comes standard with AES-256 encryption, a kill switch, and zero-knowledge DNS.

The speed lives up to the hype thanks to servers in 94 countries. ExpressVPN is like a big game hunter with all its pelts on the wall when it comes to unblocking geo-locked content. It has busted past the Great Firewall of China and cracked the code on US Netflix and Hulu.

NordVPN is one of the only challengers to ExpressVPN for best in class. It has a massive array of online servers, more than 6,000 at last blush. It has the security system to match with AES-256 bit encryption, a kill switch, and zero-knowledge DNS.

A 30-day money back guarantee lives up to its word, as does its round-the-clock customer service available by either chat or phone call. NordVPN also comes with split-tunneling functionality, which means you can download some content via the VPN while other traffic is sent with your typical connection.

ExpressVPN, NordVPN is excellent at unlocking geo-blocked content including US Netflix, BBC1 Player, and Hulu.