BulletVPN Review 2021: Before You Buy, Is It Worth It? 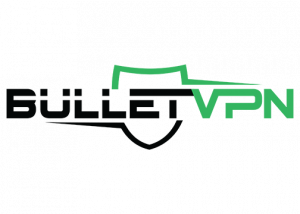 BulletVPN is a relatively small player in the world of VPNs, but a no-questions-asked guarantee on their product indicated a high level of faith in the quality of their product and had me curious as to just how good their service is. Can they compete with better-known companies, or do they still have a lot to learn? I put BulletVPN to the test to find out.

Based in Estonia, BulletVPN is focused on protecting your privacy while you browse the internet. Their security features, strict no-logs policy, and other features are all designed to provide a seamless experience, and their location allows them to escape the boundaries of the 5/9/14-Eyes Alliance, helping to maintain their privacy policy.

After thorough testing, I was genuinely impressed with the VPN. BulletVPN delivered on security, privacy, user experience, and unlocked every single streaming platform I tried. While the speed tests showed fairly low numbers, I never actually experienced any significant lagging – in fact, in most cases, webpages loaded in a split second, as though I wasn’t using a VPN at all.

BulletVPN impressed me with its capabilities in unlocking the various streaming platforms. While for one site, I did have to try a few different servers before one worked, the service was able to unlock every streaming platform I tried.

After logging into the VPN, I went straight to Netflix to watch Bo Burnham’s special and was able to watch the full hour-and-a-half program without any lagging or interruptions. 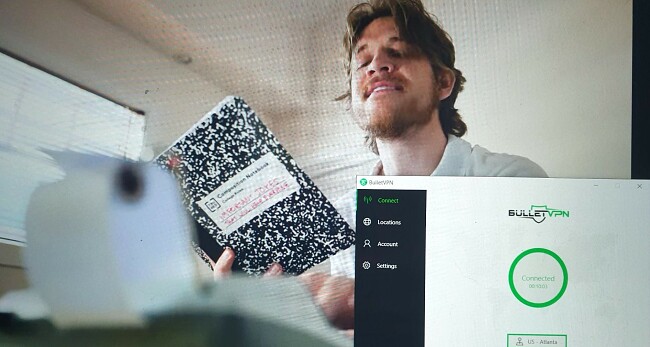 Amazon Prime didn’t detect my use of BulletVPN at all, as it sometimes does with other VPNs and I was able to stream an entire movie without issue. No lag, no dropped connections, and no issues whatsoever – it was a smooth experience, as though I wasn’t using a VPN at all. 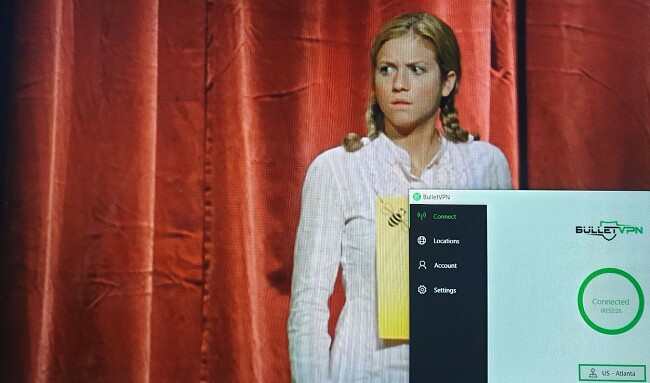 Hulu didn’t unblock right away – I had to try a couple of different servers before it worked, but then I was able to stream a few episodes of How I Met Your Mother without issue. Only the Ultra-HD servers worked, but that was enough to do what I wanted.

I was able to connect easily to BBC iPlayer with no speed issues.

Youtube rarely has an issue with VPNs, but I checked anyway and had no issues streaming a few videos.

Like Youtube, Vimeo doesn’t normally deny use due to a VPN, but I was able to enjoy some short videos – although I did hit a bit of a lagging issue on Vimeo, the first time I’d experienced less than seamless streaming all day.

France2 was easily unblocked by BulletVPN.

BulletVPN even unlocked SBS Australia, and I had no issues with lag, despite the fact that I was connected to a server halfway around the world.

I watched a recent baseball game and had no streaming issues or lags. BulletVPN can easily unblock ESPN+, so that you don’t miss your favorite team playing. 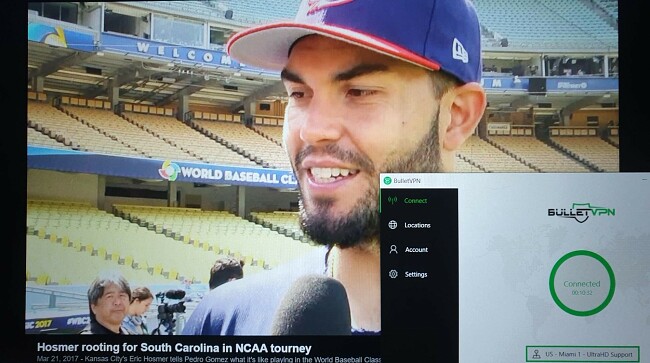 I hit my first streaming obstacle with Disney+. Not only could BulletVPN not unblock it on the first try, rather than showing an error message, I simply stared at a black screen. However, when I tried the Ultra HD servers, the site unblocked and I was able to watch a movie without an issue.

Mostly good, but some major issues.

I installed BulletVPN on my Surface tablet, my laptop, and my cell phone, and I experienced no issues whatsoever with the speed, even when using a server halfway around the world.

While using the VPN, even on distant servers, I was easily able to play mmorpg games that rely on fast internet speeds, without any lagging, so if you’re interested in online gaming, BulletVPN can keep up with you.

I ran speed tests on BulletVPN while connected to three different servers to see exactly how fast the service is. From the Florida servers, I was able to get speeds of 2.5MB per second – not great, which surprised me as I haven’t had any issues with lagging. 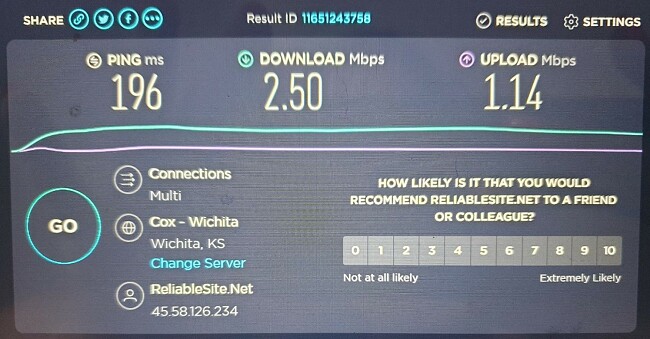 Next, I decided to virtually travel halfway around the world and connect via a server in Australia. Somehow, my speed actually increased to 6.6MB per second – normally, distance slows a VPN, but not in this case. 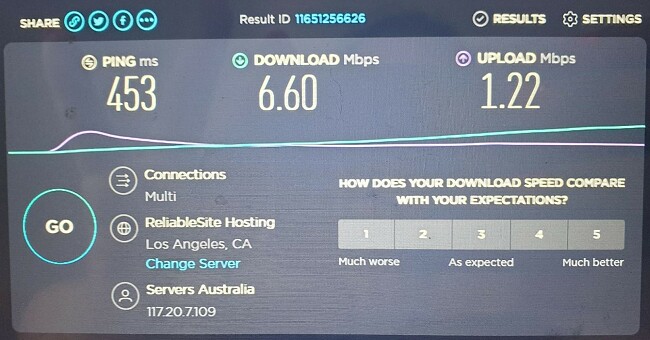 Lastly, I decided to connect to BulletVPN’s server in Estonia, where the company is based. Speed dropped again, achieving an average rate of only 2.78MB per second. 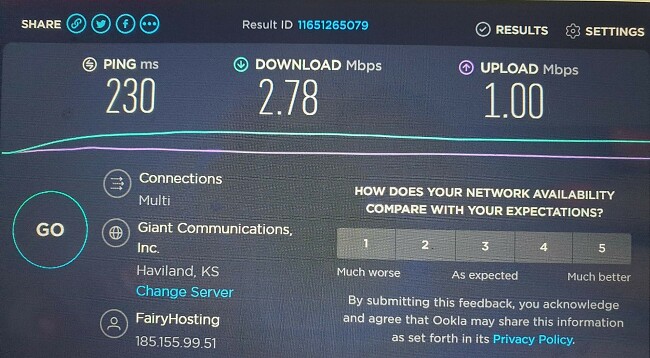 None of these are particularly excellent speeds, and they certainly don’t compare to larger VPN companies like ExpressVPN, but regardless, had I not done an actual test, I wouldn’t have known it was so slow.

BulletVPN offers over 150 server locations in more than 55 countries, adding two countries to their 2020 roster, and they expand farther each year. While these numbers don’t compare to those of the bigger and more established VPNs like Private Internet Access, who have thousands of servers at their disposal, BulletVPN’s servers are spread across North America, South America, Europe, Africa, Asia, and Australia, hitting every continent except Antarctica.

Security is one area where BulletVPN shines. The company uses AES 256-bit encoding, a military-level encryption, as well as BulletShield and an automatic kill switch to keep your devices safe from viruses and dropped connections. They offer a number of VPN protocols, including L2TP, IPSec, and IKEv2, but the best option is OpenVPN. You can even utilize Wireguard protocol with ease.
I tested for DNS, IP, and WebRTC leaks while connected to multiple different servers and not once were there any indicators that BulletVPN isn’t secure.

You don’t have to worry about your privacy with BulletVPN. The company is based in Estonia, avoiding many data retention laws, and their privacy policy very clearly states that under no circumstances will user data be shared. That, paired with their strict no-logging policy (they log connection time and amount of bandwidth, but none of your personal information or activities), means your data should be very safe and your privacy completely protected. They promise to not log details, even your IP address or DNS connections.

BulletVPN allows P2P sharing and supports torrenting apps, like BitTorrent, so torrenting is an option. Additionally, the security features provide a solid level of protection while torrenting.

Does BulletVPN Work in China? Yes!

Yes. Due to China’s strict firewall and VPN restrictions, it can be very hard to find a VPN that works in the country, but BulletVPN is one of the few options. Their Hong Kong server allows you to utilize the VPN in China with minimal lag.

You can use BulletVPN on six different devices simultaneously, so you’ll have no issues watching your favorite show on your Roku, even as you get some work done on your laptop. I connected the VPN on three of my devices – cell phone, laptop, and tablet – simultaneously and experienced no lag or interrupted connections.

Installation of BulletVPN is very easy. I simply downloaded the application from the website, and it took only one click to install. It took only a couple of minutes to install, and then I was able to log in and use the service. 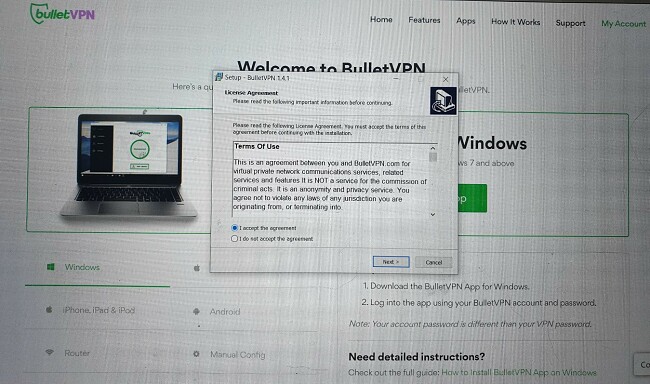 However, I did have a few issues with logging in. It consistently took a few tries before the application would allow me to log in, an obstacle that becomes annoying quite quickly.

Overall, BulletVPN support is quite good. They offer support in a number of different options, including guides published in the Support section of their site, email, and website chat support. Requests and emails I sent generally received answers within six hours, and were clear on how to fix issues.

BulletVPN offers tiered plan options, with a basic monthly plan costing $10.98 per month. Paying a year in advance costs a total of $89.98, or the equivalent of $7.50 per month, and a three-year plan saves the most money, with a cost of $118.58, the equivalent of $3.29 per month. The price isn’t particularly impressive for VPNs, but it’s not overpriced, either.

BulletVPN is a product you should consider. While their server network is still small by comparison, it does the job, and the quality of the service balances out a slightly high pricetag. Their security protocol keeps your devices safe, while their privacy policy keeps your data secure, and the VPN works anywhere in the world, including in China. Their no-questions-asked money-back guarantee even proves the company’s confidence in the product. With a little more time to grow, BulletVPN may be on par with the leaders of the VPN industry.

Can I use BulletVPN for free? Yes.

Yes, but only for a day. BulletVPN does offer a free trial if you email them and ask about trying their service, but the trial is only active for one day. Beyond that, you have to purchase a subscription.