Watch Turkey’s PuhuTV From Anywhere with a VPN

One of the things that often intimidates people when they consider trying out a virtual private network (VPN) to access restricted content is the feeling that they don’t have the technical intellect to select, much less install a VPN.

Seldom has there been more of a misconception. VPNs are easy to understand, easy to research if you have the proper resources, and truly easy to use if you find a good set of step-by-step instructions (see below).

Once you’ve got the basics down, you can access pretty much any resource in the world when it comes to streaming entertainment. If you are a fan of Turkey’s PuhuTV but live outside of Turkish domain, utilizing a VPN is a great way to keep current with your favorite shows. 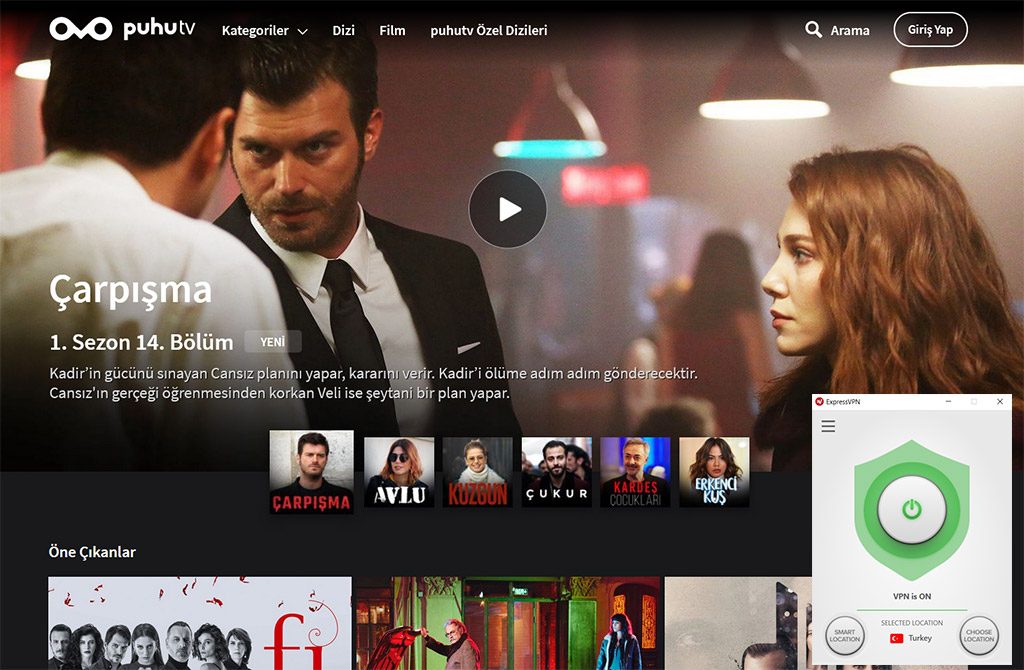 How a VPN Works

Instead of going through the nitty-gritty technical details, here’s a painted picture of what a VPN does. It connects your Internet-capable device to one located in another location, often another country, from which you wish to connect to the Internet.

It does this by creating an encrypted connection between those two computers. When data passes through the connection, no third party can see it.

So if you are wanting to access PuhuTV’s website to stream your favorite Turkish television programs, once you connect to the VPN, you type in PuhuTV’s web address. Your request is encrypted and sent to the remote server located inside of Turkey. There it is assigned an IP address for Turkey and connected to the TV network’s website.

The IP address is recognized as Turkish, and access is given to stream your favorite programs. The streaming data is downloaded back to the Turkish remote server, encrypted, sent to your computer, and then decrypted for your enjoyment.

When you’re trying to unblock content in a country that practices a pretty fearsome version of Internet censorship, speed and security should be your top two priorities as you compared VPNs.

For those two items combined, NordVPN should be at or near the top of your wish list. Its security includes AES 256-bit encryption, a kill switch, and IP leak protection.

The kill switch is a real important piece when your dealing with a country like Turkey that is very strict when it comes to its censorship and copyright protocol. NordVPN also has great speeds to offer, due in large part to its crop of more than 5,100 servers spread across more than 60 countries.

A final note on VPN is that while it works almost all of the time, when it doesn’t, you have access to some of the best customer service available – real people ready to chat or talk on the phone 24/7.

True to its name, SaferVPN is conscious of security when it comes to VPNs. It operates under a strict no-logs policy and is based in Israel, which has powerful security protocol for its citizens and companies.

SaferVPN also has a kill switch and supports several prominent forms of encryption, including PPTP, L2TP/ISec, IKEv2, and the always-popular OpenVPN.

SaferVPN has a very strong record on unblocking geo-locked content and come with a free trial and 30-day money-back guarantee.

ExpressVPN continues to lead the pack when it comes to speed, whether it’s uploading or downloading. It has servers in nearly half the countries in the world (94 at last count), and offers unlimited bandwidth and server switches.

It has high-quality customer service as well, with 24/7 customer support on live chat in multiple languages. ExpressVPN’s quality security is sometimes overshadowed by its impressive speed.

It claims to have the best in-class security and encryption, which probably stems from the fact that it has a strict no-logs policy, DNS and IP leak protection, and its own version of a kill switch called a Network Lock.

Quick Guide to Using a VPN to Access PuhuTV