Just because you are not in the UK doesn’t mean that you can’t stream the BBC iPlayer. While the BBC makes it challenging to access all their content, with a proper VPN you can stream all your favorite shows as if you are in the UK. Don’t let an image like the one below ruin your holiday – read on and see how you can bypass one of the toughest geo blocks that frustrate so many BBC iPlayer viewers.

Have you seen this error message: BBC iPlayer only works in the UK. Sorry, it’s due to rights issues.

Whether you are outside the UK for work or travel or you live in another country that cannot access BBC iPlayer, bypassing their geo-block is quite a task. If you are currently reading this, you are in one of two possible situations:

No matter which one applies to you the answer is the same – a strong VPN. Between the numerous features needed to bypass the geo-block and the BBC’s tight control over proxies and VPNs, it can be tough to find a reliable VPN provider. Well, the search is over!

We’ve tested hundreds of VPNs against the BBC iPlayer block and chose the top 4 based on speed, available UK servers, security, and ease of use. 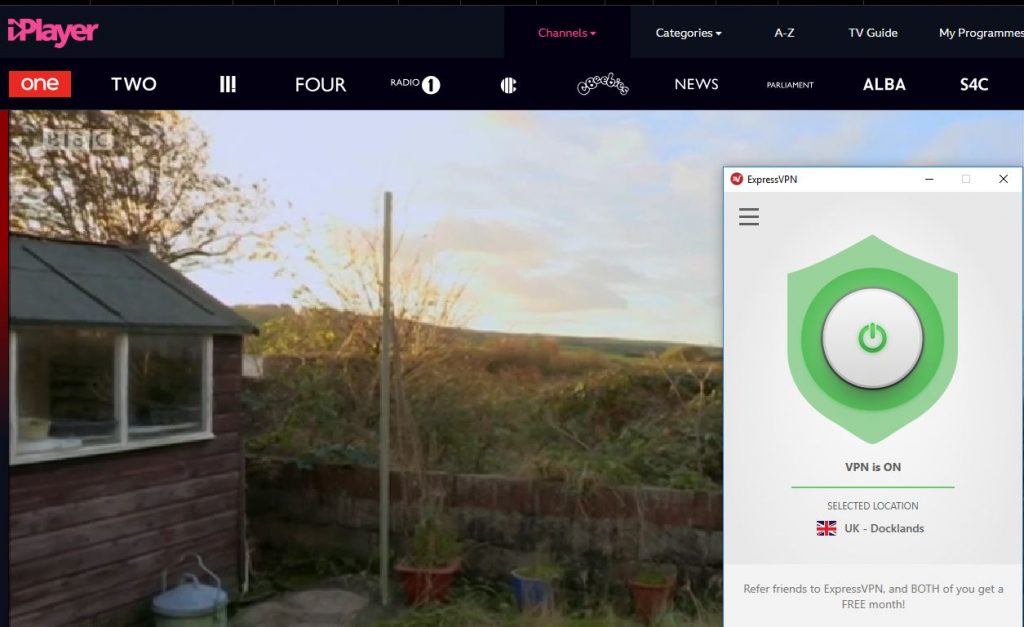 ExpressVPN is a solid choice for BBC iPlayer thanks to its combination of super-fast UK servers, superb privacy features, and helpful customer care. The UK-based servers support OpenVPN (both TCP and UDP) and the strict zero logs policy makes this VPN one of the safest available on the market.

The connection speeds are lightning fast and allow you to stream your favorite shows without any buffering. If you find that BBC iPlayers detection tool has blocked the server you are on, the technical support team will hook you up to a new server that will fix the problem in next to no time.

With an excellent variety of UK-based servers and very fast speeds to match, this British Virgin Island-based VPN is possibly the most dedicated services for the best BBC iPlayer experience. Plus, it has a 30-day money back guarantee so you can try it out risk-free and see what we are talking about. 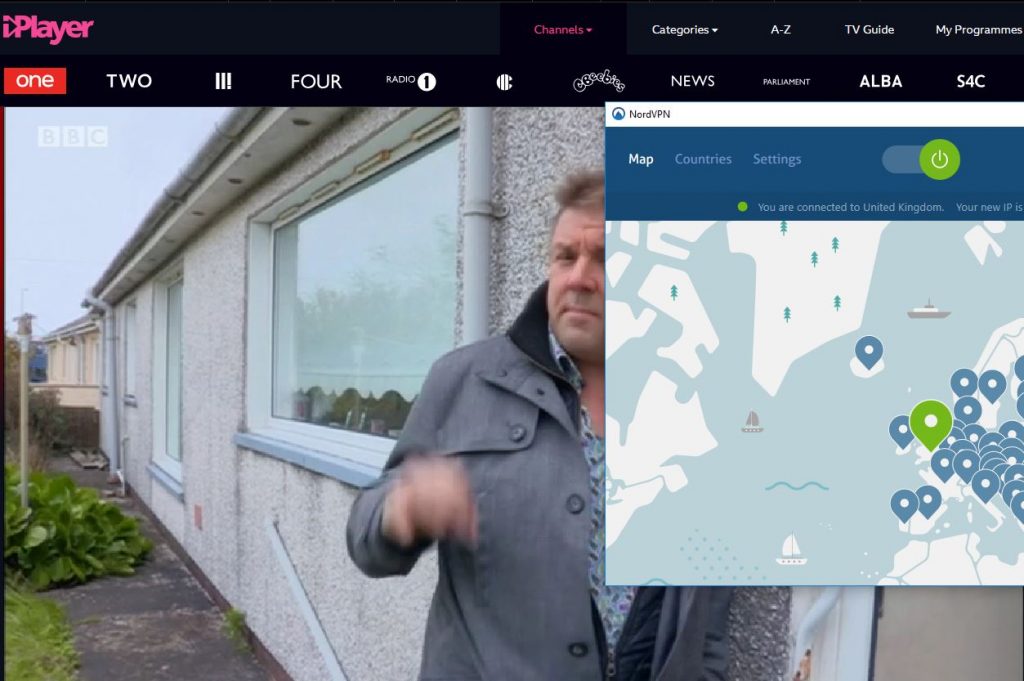 This VPN is almost on a par with ExpressVPN and has a great track record when it comes to unblocking BBC iPlayer. With more than 400 servers located in the UK, this VPN is very resourceful. NordVPN has also recently had some network improvements that have dramatically increased connection speeds, and is now only slightly slower than ExpressVPN.

This VPN offers a great variety of advanced features, including a dedicated IP address, which is excellent for problem-free content unblocking. It is not part of the standard subscription, so it is available for an additional amount, but very worth it, especially considering the low price of NordVPN.

However, with the standard subscription you get 6 simultaneous connections, 24/7 live chat support, and a 30-day money-back guarantee. It also has a strict no-logs policy and strong encryption, making NordVPN a secure, reliable, and fast choice for streaming all geo-blocked content, including BBC iPlayer.

3. CyberGhost – Servers that optimized for the iPlayer

After a huge overhaul, CyberGhost has become a frontrunner among the VPNs that can unblock BBC iPlayer. While CyberGhost boasts a phantom-like theme, this VPN has a ‘what you see is what you get’ attitude to its service. And what you get is quite a lot. As you can see in the image above, there are six different user profiles that you can choose from, to help find the ideal server.

If you select Unblock Streaming you will find the BBC iPlayer listed under All and Most Popular. Just click on the box and CyberGhost will connect to the best server, and open the BBC iPlayer in your browser.

You get access to more than 150 servers based in the UK, a strict no connection or usage logs stored policy, up to 5 simultaneous connections, and excellent live chat support. But, what sets this VPN apart is its simple-to-use, custom profiles. In just a few clicks, you can customize the client to unblock mode with settings specifically for BBC iPlayer.

If you have any issues, customer support is very responsive and quick. CyberGhost is very reliable and dependable for unblocking BBC iPlayer. Although it is not as quick as ExpressVPN or NordVPN, its speeds are still very respectable. CyberGhost offers a free 7-day trial, as well as a 30-day money back, guarantee to boot.

4. Surfshark – Gets the job done 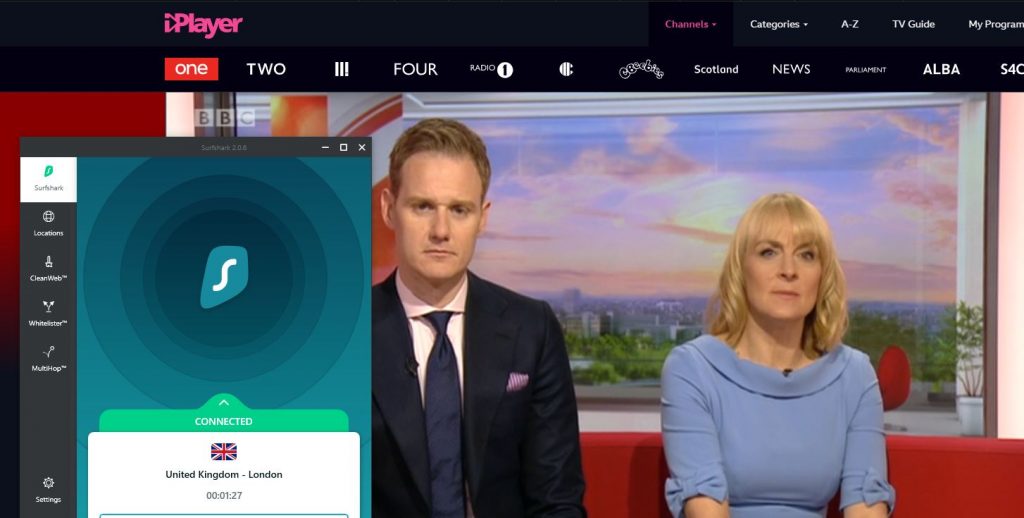 We’ve been following Surfshark since they came on the market and are very impressed with how fast they’ve become a real player in the VPN industry. With servers in London, Manchester, and Glasgow you can quickly get a UK IP address that will allow you access to the BBC iPlayer.

Surfshark is one of the cheaper VPNs that we’ve reviewed that allow for unlimited device connections, fast streaming, and no data limits. All you need is one account for the whole family and you can all watch your favorite shows, sporting events, and news programs at the same time.  With apps for Windows, MacOS, Linux, Android, iOS, Apple TV, Fire TV and more you’ll be able to enjoy the iPlayer from anywhere.

What to Look for When Selecting a VPN for BBC iPlayer

When looking for the best VPN to unblock BBC iPlayer, there are a variety of features that need to be considered, all of which we took into account when making our recommendations above.

This is the most important feature to look for when considering VPNs to unblock BBC iPlayer – you need to know that the VPN has servers that are capable of doing so. Not all VPNs have the servers needed in the UK, which means they cannot offer the same capabilities and resources as the VPN services listed above.

When using BBC iPlayer, you will want an HD stream that does not buffer when you are watching your favorite shows, making speed an essential feature. Our above recommendations are some of the fastest VPN services available that can also unblock BBC iPlayer.

While privacy when online may not be your biggest concern, the VPN you select should still provide a watertight privacy policy and a strict zero-logs policy to ensure that your data and identity is protected, and that no one will know that you have unblocked iPlayer.

When BBC iPlayer discovers a VPN connection, it blocks it immediately. Having access to great 24/7 live customer support allows you to find a new server quickly and easily, so you can get right back to your shows.