Hyped for Super Drags? Here’s How to Watch It Outside of Brazil

Television shows don’t get much more hype and controversy than Brazil’s Super Drags has. The animated series follows the escapades of three gay coworkers at a department store who also happen to be superhero drag queens fighting crime and conservative politicians. 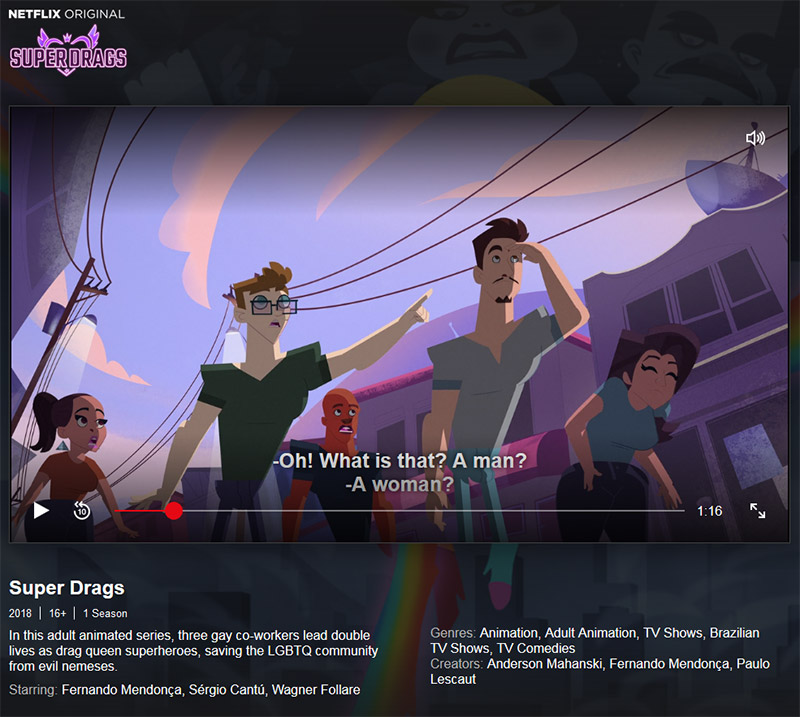 The show has already been condemned by the Brazilian Society of Pediatrics and several other groups have warned that the show’ content, despite being animated, is not for children.

Despite the controversy, there are plenty of people both inside and outside of Brazil who can’t wait to watch the new show. It will be streaming on Netflix, but if you’re outside of Brazil that could be a problem as you’ll run into Netflix’s fierce security probe known as geoblocking.

In order to keep certain content specific to certain regions, Netflix won’t let you stream shows if you’re not in that version of Netflix’s jurisdiction, even if you have a membership to this service.

Fortunately for Brazilians outside their homeland or simply people interested in watching the show, there’s a solution. It’s called a virtual private network (VPN) and in addition to adding grant security to your connection when you search the Internet, it can also connect you to computers in other countries that happen to share the same IP address as the country whose Netflix catalog you wish to access.

How do VPNs work?

A VPN client is downloaded to an Internet-capable device and then forms a connection with another server located elsewhere In this case, that server would be n Brazil. The virtual private part of the name comes from the fact that the VPN forms an encrypted network between the home computer and the remote one.

When the user begins requesting website to visit, such as Brazilian Netflix, that request will travel through an encrypted tunnel to keep it safe from any third parties trying to snoop. Once the data reaches the remote server, it is deployed and assigned an IP address for the country of the remote servers origin, in this case Brazil.

When the remote server sends the request to the Internet, the IP address will match up to what Netflix knows equals computers in Brazil and you will be able to surf freely for your favorites shows. You can begin downloading them from there. The data packets will first head to the remote server, which will encrypt them. They’ll move on through the secure connection to the user device, which downloads them.

They are now available for watching no matter if you’re located in Oslo, Oahu, Orange County, or Oman.

Step by Step Instructions to watch Super Drags Outside of Brazil

What are the best VPNs to use to watch Super Drags?

Private Internet Access (PIA) VPN is based in the US, but that doesn’t stop it from being a quality, all-around VPN. It does not keep logs and has a kill switch, along with top-quality encryption and DNS leak protection.

There are more than 3,000 servers available, but only across 25 countries so make sure Brazil is one of them before purchasing this VPN.

Trust.Zone VPN is a rock solid VPN that has a kill switch, no-logs policy, and unlimited bandwidth standard in its package. You can try it free for 10 days with a money-back guarantee and it has servers in more than 30 countries.

It’s also one of the lowest priced VPNs, which always helps.

IPVanish VPN is more than just a gimmick name, it has more than 1,000 servers from 60 countries at last count.

It offers unlimited bandwidth in all packages and robust 256-bit AES encryption that will do a great job of protecting your information as it’s coming and going.