How to Get a Tunisian IP Address (Updated November 2022)

If you need to transfer money from outside Tunisia, you’ll be blocked from your Banque Al-Baraka account. Even paid streaming sites (like Artify and Netflix Tunisia) are geo-restricted. But there’s a way to safely regain access by using a VPN to get a Tunisian IP address.

Le VPN had the best security and speeds on its Tunisian servers, easily accessing popular sites and services. Plus, it has a 30-day money-back guarantee to try Le VPN’s Tunisian servers for free. You can easily get a refund if you change your mind. My refund process only took a couple of minutes, and I got my money back within a week.

Quick Guide: 3 Easy Steps to Get an IP Address in Tunisia From Anywhere 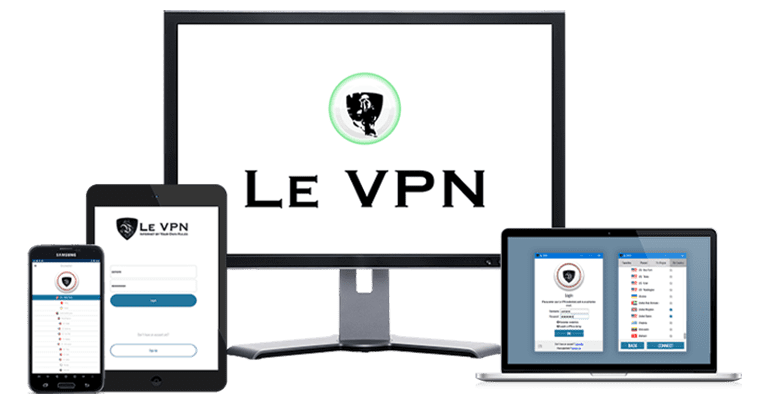 Le VPN’s Tunisian server stayed connected for more than 4 straight days during my tests. This showed that you get really reliable connections using Le VPN’s Tunisian IP addresses. Better yet, I had no problems accessing Tunisian sites and services.

I tested speeds on Le VPN’s Tunisian server by connecting 2 devices at once. My download speed was around 50% lower than my baseline speed. However, it was still fast enough to stream local TV shows on my Android and my PC at once without performance issues. On the other hand, trying to stream on more than 2 devices stressed Le VPN’s limits and caused lag. 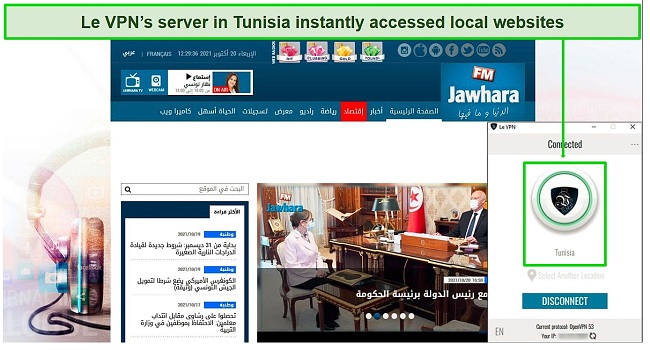 I was pleased that Le VPN gives you a similar number of device connections as most premium VPNs (5 per account). However, there were some slight slowdowns when I maxed out the limit. It wasn’t much, but enough to give me about 10 seconds of buffering in the middle of a live-streamed TV show.

Le VPN is also compatible with all the devices I use most including Windows PCs, macOS, iOS, and Android, and could unblock all the same sites on each platform. It unblocked Lilia on Artify on a PC, Mac, Android, and iPhone, and had no problems on any of them. 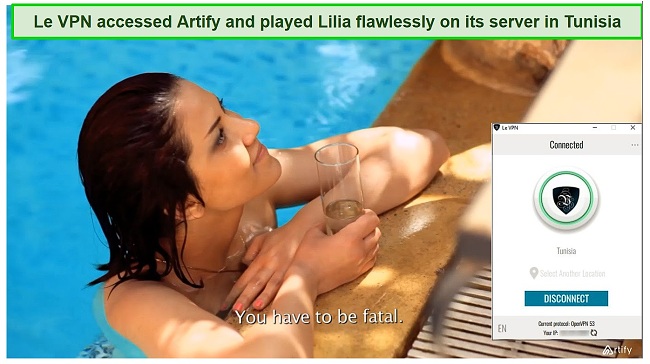 Data like your browsing activity and location is completely hidden with Le VPN’s 256-bit military-grade encryption. I also found a kill switch in Le VPN’s settings, which was a relief — this essential feature shuts off your internet if you disconnect accidentally, preventing data (like your real identity and location) from leaking out to hackers.

One con to Le VPN is that due to the logistical challenges of maintaining servers in Tunisia, you’ll get a virtual Tunisian IP address using a server that’s physically located in the US. Some websites you visit will see the server in the US, but your real IP address and other private data will remain hidden regardless.

If you prefer to try software before you buy it, you can use the 30-day money-back guarantee to get Le VPN free for a month. That gives you plenty of time to make sure you like it. If not, you can get a refund easily from one of its friendly 24/7 live chat support agents. I went through the process myself — I got my refund approved right away, and the money was in my bank account within a week.

How Does a VPN Get a Tunisian IP Address?

A VPN creates an encrypted tunnel that connects your device to the internet privately. It masks your real IP address, geographic location, and other information by redirecting your data through a private server run by the VPN. Once you’re connected, third parties won’t be able to see or collect any of your real data.

To get a Tunisian IP address, you will need to connect to a VPN with servers there. This will appear as if you’re connected to the web from within Tunisia. Armed with this IP address you can access local websites, TV channels, and streaming platforms that you’re subscribed to (and should be able to use from anywhere). For example, it’s possible to connect to a VPN server in the US to access your American Netflix account without location errors. However, this goes against Netflix’s terms of service and could get your account banned with no refund — so I strongly advise against it.

After testing well over a dozen VPN providers before I found any with Tunisian servers, I can confidently recommend Le VPN. It has Tunisian servers with consistently fast connection speeds for lag-free Netflix and Hannibal TV, and smooth online games. You can try Le VPN’s Tunisian servers risk-free using its 30-day money-back guarantee. If you aren’t satisfied, you can easily get a refund.

Research Methodology: How I Tested the Best VPNs for a Tunisian IP Address

I tested the top VPNs in 2022 to find the best ones for Tunisia. Here are the specifics that I looked for:

FAQs: Changing Your IP Address With a VPN

Can I use a free VPN to get a Tunisian IP address?

No, not even the best free VPN providers have servers in Tunisia. Even if they did, the tight bandwidth caps on free VPNs cut you off within a couple of hours if you use them for streaming or gaming (if they can unblock streaming sites at all). Worst of all, many “free” VPN providers make money by interrupting you with ads or selling your identity and browsing data to marketing companies.

Instead of sacrificing your privacy for a low-quality VPN, just use the 30-day money-back guarantee of a premium VPN like Le VPN. That gives you plenty of time to try Le VPN to get an IP address in Tunisia for a few weeks, then get a refund once you’re done using it.

Are VPNs legal in Tunisia?

The VPN on this list is completely legal to use in Tunisia, assuming you don’t use it to do anything illegal. For example — downloading copyrighted material over torrent networks is still against the law, even if you do it with a VPN. I don’t condone illegal activities, but just using VPNs in Tunisia won’t get you into any trouble.

Can I use a proxy to get an IP address in Tunisia instead of a VPN?

Proxy services almost never have servers in Tunisia, and those that do aren’t safe. Unlike a premium VPN provider, proxies don’t provide full encryption to protect your data from hackers. Aside from that, most of them don’t unblock streaming sites from abroad — and the few that do get easily clogged from too many users at once. This causes slowdowns and lag when you try to watch anything, preventing you from keeping up with Tunisian shows and movies while you travel.

How do I check if my IP address has changed?

Use a top VPN to get an IP address in Tunisia, then use this free IP checker tool. If you see a location in Tunisia on the map, you know your IP address has changed and third parties can no longer track you online.

Start Browsing the Internet in Tunisia With a VPN

If you want to access your online Tunisian banking and streaming accounts from outside Tunisia, you need a tried-and-tested VPN to give you an IP address there — but even the best VPNs on the market don’t usually have working local servers. I spent hours trying different VPN providers until I found some that actually worked with Tunisian sites and secured my private data with top-level encryption.

Out of the VPNs I tested, Le VPN had the fastest Tunisian servers, along with a range of security and privacy features. It also allowed me to access Tunisian websites with no problems. Best of all, you can try Le VPN’s servers in Tunisia for free by using its 30-day money-back guarantee. 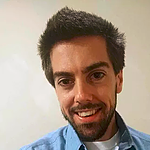 Written By Eric Raue
Eric is a web security enthusiast who is passionate about keeping the Internet open and free. He loves following trends in topics like VPNs, web censorship, and Bitcoin, and sharing his passion with others through his writing.
This Article contains
Latest articles
Share & Support