Avoid Blocked YouTube Videos with these 4 Fast VPNs in 2021

Netflix and Spotify aren’t the only companies to geo-blocking their content. For years, YouTube has embraced the practice as they bend to the wishes of content creators. Geo-blocking is a tactic employed by companies that restrict content distribution in specific regions; a policy which withholds media from millions of users worldwide. 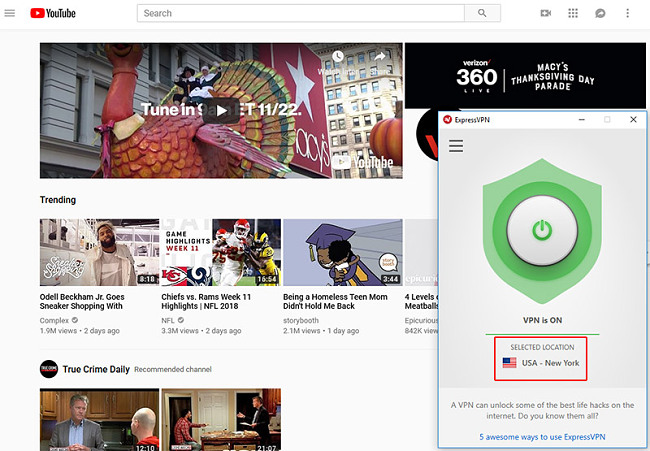 Geo-blocking can be frustrating, especially on a mostly free and open service like YouTube. You want to view the Saturday Night Live sketch your friend shared on Facebook? Think again. Want to see a music video from your favorite band? It’s not happening. Instead, you’re met with the message that the video isn’t available in your location. Not only is YouTube geo-blocks a growing menace on the video-sharing site, but they can also be challenging to outwit.

And yet, geo-blocking isn’t the only threat to YouTube access. Schools and businesses may block access to the site for a variety of reasons including productivity and safety concerns. While countries like China, with strict censorship laws, block YouTube among other sites.

Many sites have promised a way to sidestep these restrictions. However, most, if not all of these solutions, are workable only on a case-by-case basis. This is not the answer. A better solution? Using a VPN to avoid geo-blocking altogether.

Of course, you don’t want just any old VPN. VPNs, by nature, can slow down your internet, and making sure you have the best YouTube experience means ensuring your VPN is as fast as possible and has servers in the countries from where you wish to access content.

Below are 4 VPNs that users can depend on for blazing fast speeds in 2021.

ExpressVPN’s numerous servers mean that you will have access to Spotify, Netflix, and geo-blocked YouTube videos. ExpressVPN boasts some of the fastest speeds among VPN companies and allows access P2P connections.

If the idea of using a P2P network makes you uncomfortable, keep in mind that ExpressVPN has 256-bit AES encryption, DNS/IPv6 leak protection, kill switch and split tunneling. If you are interested in trying the software first, ExpressVPN offers a 30-day money-back guarantee.

IPVanish VPN’s network of servers means that YouTube and Netflix users can enjoy solutions that work for them. IPVanish doesn’t skimp on security and their 256-bit AES encryption and no traffic logs policy will keep you safe while you use the software. IPVanish only allows torrenting only within the Netherlands, but regardless of this stipulation, the company allows unlimited P2P traffic and anonymous torrenting.

The company also offers users many security protocols such as IKEV2, OpenVPN and L2TP/IPsec to allow users the most versatile and usable VPN as possible. IPVanish allows ten simultaneous connections on multiple devices, and if you ever run into any trouble, their 24/7 customer support is ready and waiting to assist. The software is available on a variety of platforms, and if you’re interested, you can sign up for a trial. With IPVanish’s 7-day money-back guarantee, it’s hard to go wrong.

PrivateVPN boasts that it is the fastest-growing VPN in the world. To keep you safe, PrivateVPN is armed with 256-bit encryption and 2048 DH key. If being able to access both foreign and local services is a concern for you, this is where PrivateVPN’s split-tunneling feature can help you out. Split-tunneling will allow you to connect to both services while also allowing you to access local web services and even your network printer.

PrivateVPN offers users a variety of security protocols so you can set up your VPN any way you like. No matter your device, PrivateVPN also works on a variety of platforms, including Mac, Windows, and Android. For those wondering if PrivateVPN is a good fit for them, the company offers a 30-day money-back guarantee.

CyberGhost VPN is always expanding and improving to serve their customers better. Their 256-AES technology, and DNS leak protection help ensure that your data is protected, and they promise never to track your activity or keep logs.

CyberGhost VPN also pledges to protect devices on all platforms like Android, iOS, Mac, or Windows and you can also safeguard seven devices at a time. To help you get started, CyberGhost VPN offers users a 45-day money-back guarantee.

People considering using a VPN for YouTube are usually interested in one thing: to have access to the same YouTube content as others no matter where you are. While geo-blocking is a legal practice, it doesn’t always feel fair to the individuals affected.

Thankfully, some workarounds are both practical and effective.