Catch up on the Chinese Epoch Times with this Solution

There’s a lot of irony in the fact that The Epoch Times, the leading source of Chinese communities outside of China itself, cannot be seen within China. Such is the state of living inside a Communist state that practices extreme censorship. 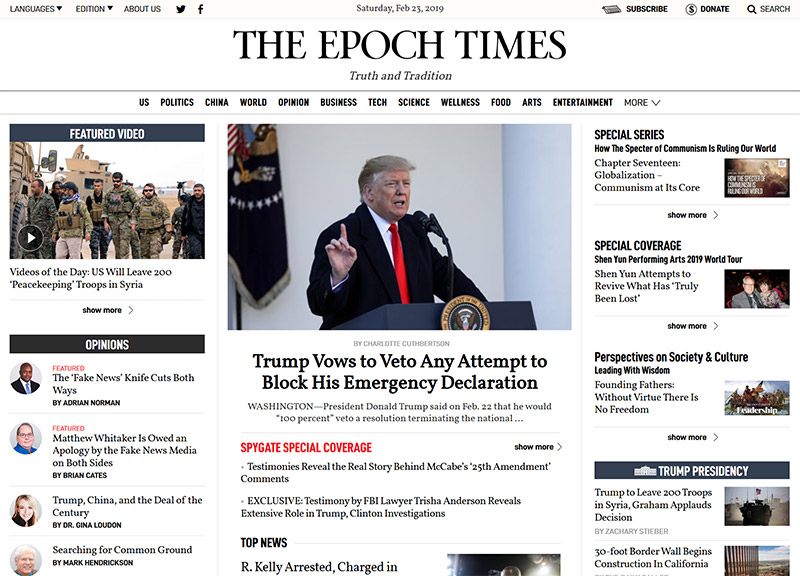 China practices its censorship thanks to the defense system known outside its borders as the “Great Wall of China”. This series of checks and balances, total cooperation from the country’s state-owned Internet Service Providers (ISPs), and the ability to spy on any computer inside its borders makes China a lethal force for censorship.

Fortunately, Chinese citizens who want to read the Epoch Times online have the ability to do so by accessing a virtual private network (VPN).

VPNs are technology that levels the playing field in countries where the government practices censorship. However, consumers have to pay attention to multiple aspects when using a VPN in countries where websites and web content is restricted.

In some places, there are laws against using VPNs. Not all VPNs are created equally, and using one that is not secure can be dangerous in a country that wields the power to arrest, deport, or fine anyone caught using VPN to access forbidden content.

There are plenty of dos and don’ts to adhere by when seeking out a VPN to use in China. This guide will give you pointers, reviews, and a step-by-step guide to accessing The Epoch Times website from Mainland China.

What to look for in a VPN for use in China

As previously mentioned, China takes its security and censorship very seriously, and has been known to fine or jail citizens caught accessing forbidden websites.

These include most Western social media sites such as Facebook and YouTube, along with common search engines like Google which carry non-Chinese approved versions of news reports about events happening in China as well as the rest of the world. Not surprisingly, security is a must have when you’re looking for a VPN to use while visiting China for work or travel purposes.

VPNs vary in many regards when it come to security but there are certain protocol to look for to ensure your connection is safe, including the following:

How to use a VPN in China

What are the Best VPNS to use in China?

Trust.Zone VPN is a great choice for newcomers to the VPN world. It has the two essentials you need for safety when browsing in China  – a kill switch and a no-logging policy. Even better, it allows for unlimited speed and unlimited bandwidth.

There’s an appreciated learning curve with Trust.Zone as well, thanks to a 3-day free trial and a 10-day money-back guarantee that can help you make sure it’s the VPN for you before you put down the hard cash.

SaferVPN is one of the more hardcore clients when we’re talking about security, largely thanks to being founded in Israel, where personal privacy laws are maximized.

SaferVPN covers a full a pantheon of encryptions, including PPTP, L2TP/IPSec, IKEv2, and OpenVPN. It has the prerequisite kill switch as well and more than 760 servers spread across 35 countries.

VyprVPN has impressive security with 256-bit encryption, no logs taken, and its own NAT Firewall to keep out the trash. It has applications for all 10 supported platforms and offers 200,000 IPs across 700 servers in more than 70 locations.