As a lifelong tennis fan, I’ve never missed a single US Grand Slam — and especially not the final event: the US Open! That’s why I was bummed when I realized I would be abroad during this year’s match. As the US Open is only available on sports streaming services like ESPN+ and Eurosport (which are location-restricted), I needed to find a way to watch it from overseas. Thankfully, you can use a VPN to watch the US Open Tennis Grand Slam from anywhere in the world.

After testing dozens of services and learning that most can’t actually unblock the US Open, I listed 3 VPNs you can trust. ExpressVPN is my top choice for its fast, dependable servers that bypass geoblocks and stream live sports without delays. You can try ExpressVPN for free for 30 days with its money-back guarantee!

Why You Can’t Watch the US Open Without a VPN

The US Open Tennis Grand Slam has strict licensing laws that restrict where it’s broadcasted. This means that although you may have a subscription to a sports streaming service, unless you’re in the right country (usually the US) you won’t be able to watch it.

Luckily, a VPN can give you a temporary IP address in a different country so it looks like you’re actually in whatever country you connect to.

Insider tip: Some sports streaming services offer lower prices for certain countries. By connecting to a VPN server in a country with a lower rate you can save money on your purchase!

The best VPN for watching the US Open is ExpressVPN — it has the fastest servers that don’t slow down during live tennis streams. Better yet, ExpressVPN has a 30-day money-back guarantee so you can try it to watch the US Open, and then get your money back after the event is over!

1. ExpressVPN — Lightning-Fast Speeds For Watching the US Open in Ultra HD Quality

During my tests, ExpressVPN had the fastest US servers for streaming live tennis. Before connecting to a VPN, my download speed was only 40.2 Mbps. After connecting to 4 different ExpressVPN servers, my average speed went up to 61.2Mbps! I watched a live doubles match on ESPN+ and the feed was perfectly smooth with no buffering or delays — my video was perfectly clear for every shot. 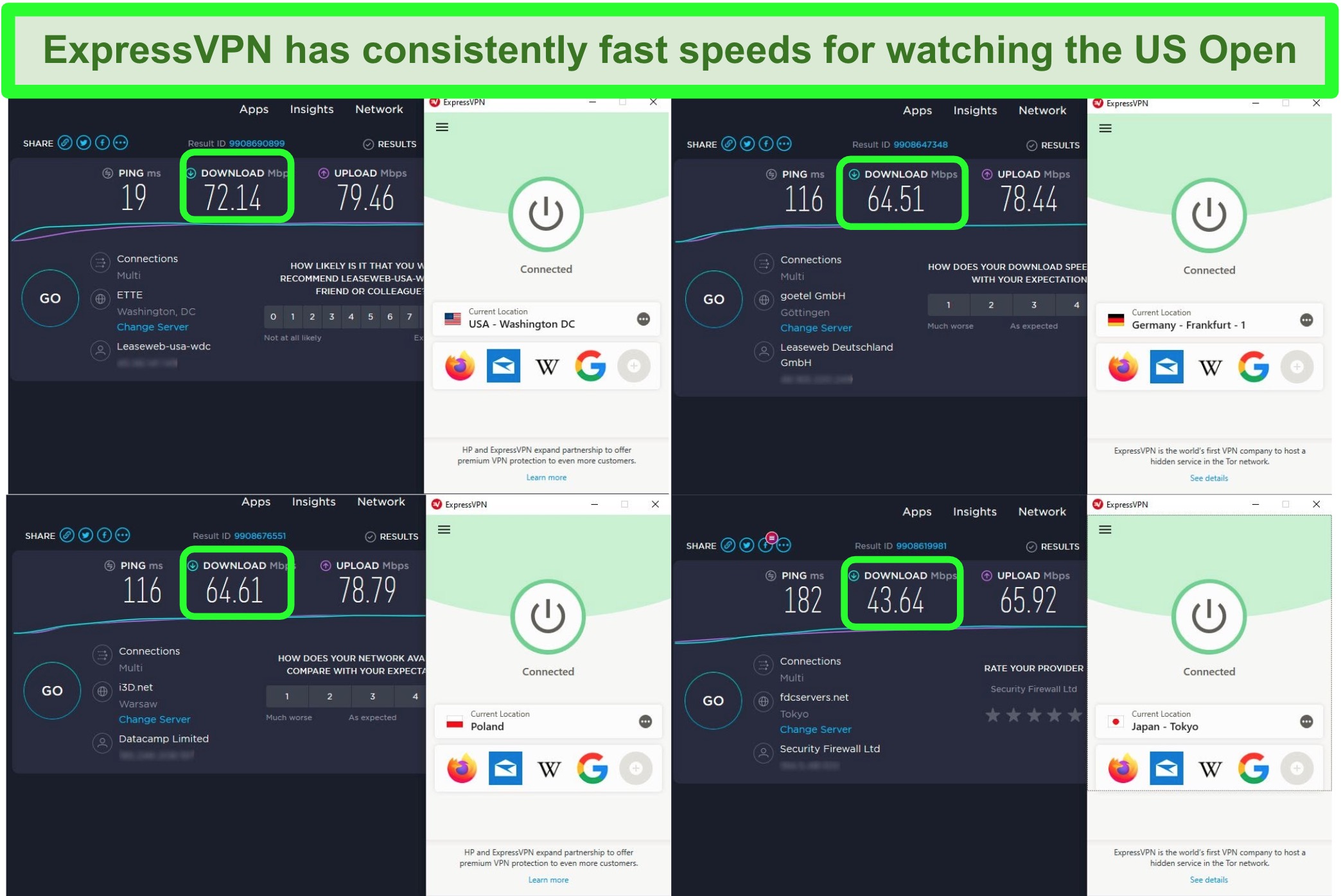 I tested its 4 servers in Japan, the US, Germany, and Poland. These are countries where you can access the ESPN Player, YouTube TV, and Eurosport, which will all broadcast the US Open. After I connected to ExpressVPN, my average internet speed increased by almost 20%! Knowing that my internet speeds are even faster than usual when I’m connected to ExpressVPN, I have peace of mind that I won’t run into any speed issues during a big match.

For a game as important as the Grand Slam, you need to make sure you have the fastest connection possible so you don’t miss any of the action. ExpressVPN has a built-in speed test that makes it really easy to find the fastest server to watch the US Open. 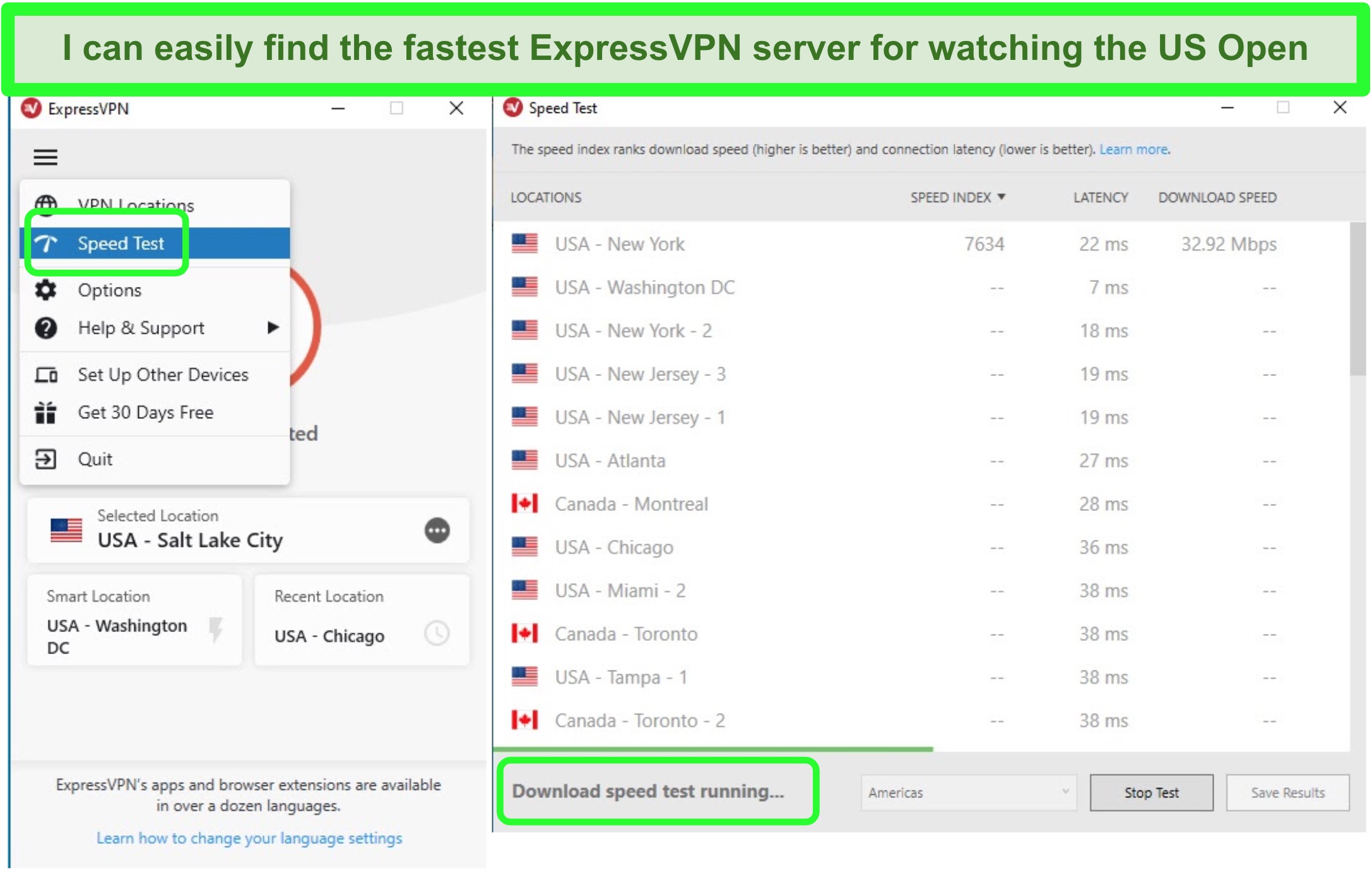 The best part is you can check out ExpressVPN for free for 30 days with its money-back guarantee. After a couple of weeks of testing, I reached out to a support rep on the ExpressVPN website via the 24/7 live chat feature. The rep processed my refund immediately with no questions asked! I had the money back in my bank account in less than a week.

2. NordVPN — Thousands of US Servers for Reliable Connections to US Open Streams

NordVPN has the largest server network out of all the VPNs I tested. This gives you the most reliable connections for streaming the US Open. With so many server options, I can rest assured that they won’t slow down from overcrowding. With such reliable servers, you won’t have to find a new server in the middle of the match and end up missing a game-changing set! 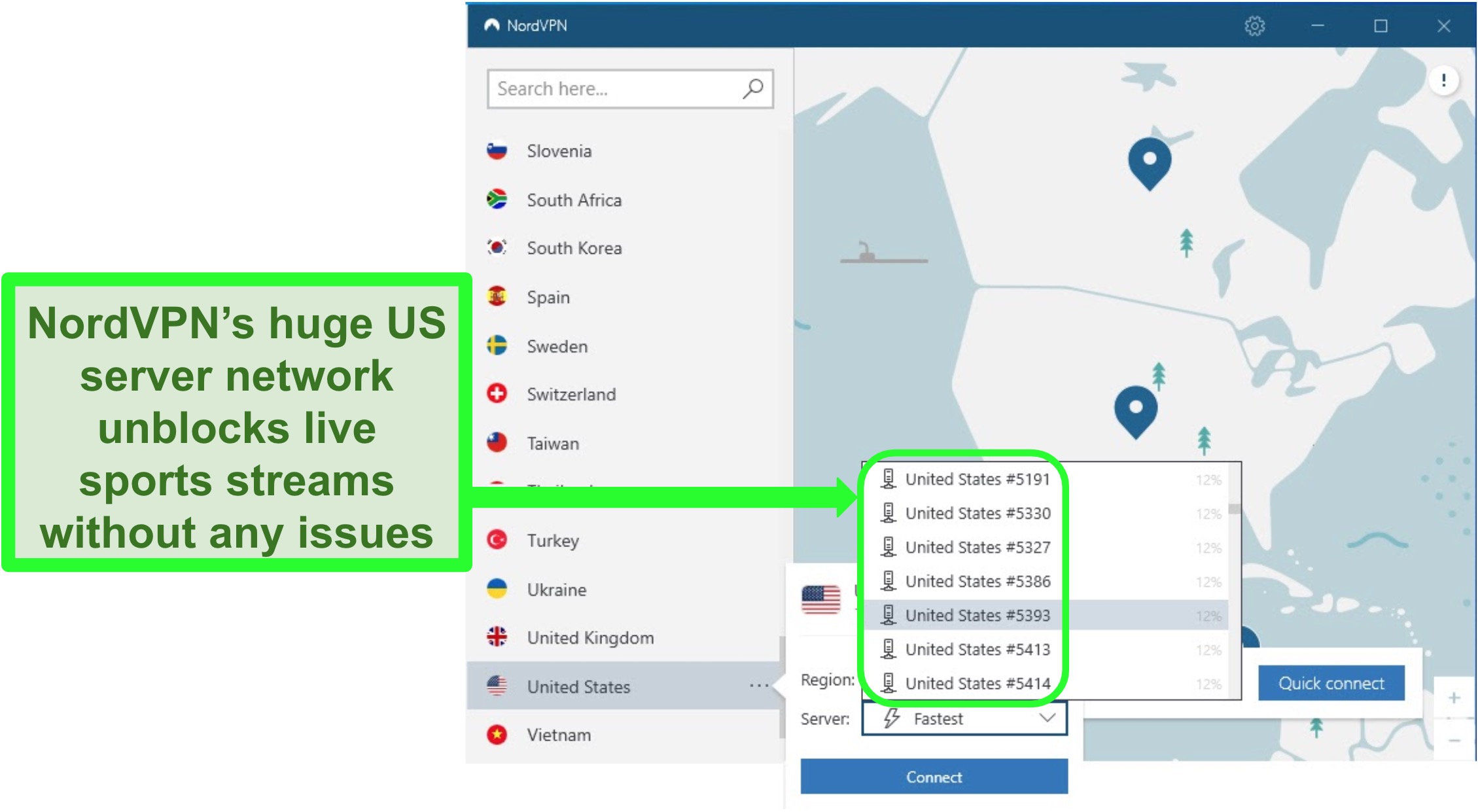 If your friends or family also need to unblock the US Open, you can share your NordVPN account for up to 5 simultaneous connections. Even if everyone is watching it at the same time, it won’t reduce your speeds or affect your streaming quality. During my tests, I watched a live stream of a match with 2 Windows PCs, 2 Android tablets, an Android phone, and an iPhone. I was impressed that I didn’t encounter delays in any of the feeds.

If you want to test its features risk-free before subscribing, you can try NordVPN for free for 30 days using the money-back guarantee. When I contacted support to cancel my account, they asked if they could help me troubleshoot any problems. I told them I simply decided that I couldn’t afford another subscription, and they processed my refund immediately. The money appeared in my bank account balance just 3 days later.

Watch the US Open with NordVPN

3. CyberGhost — Dedicated Sports-Streaming Servers for Watching the US Open Live

You can get stable connections and consistent speeds on CyberGhost’s optimized sports streaming servers. It’s easy to get the best connection for watching the US Open on its servers designed specifically for smooth feeds on ESPN, ESPN+, Eurosport, and YouTube TV. I connected to each of the servers instantly and was able to watch a live match between Serena Williams and Marina Sharapova without any buffering or video quality reductions. 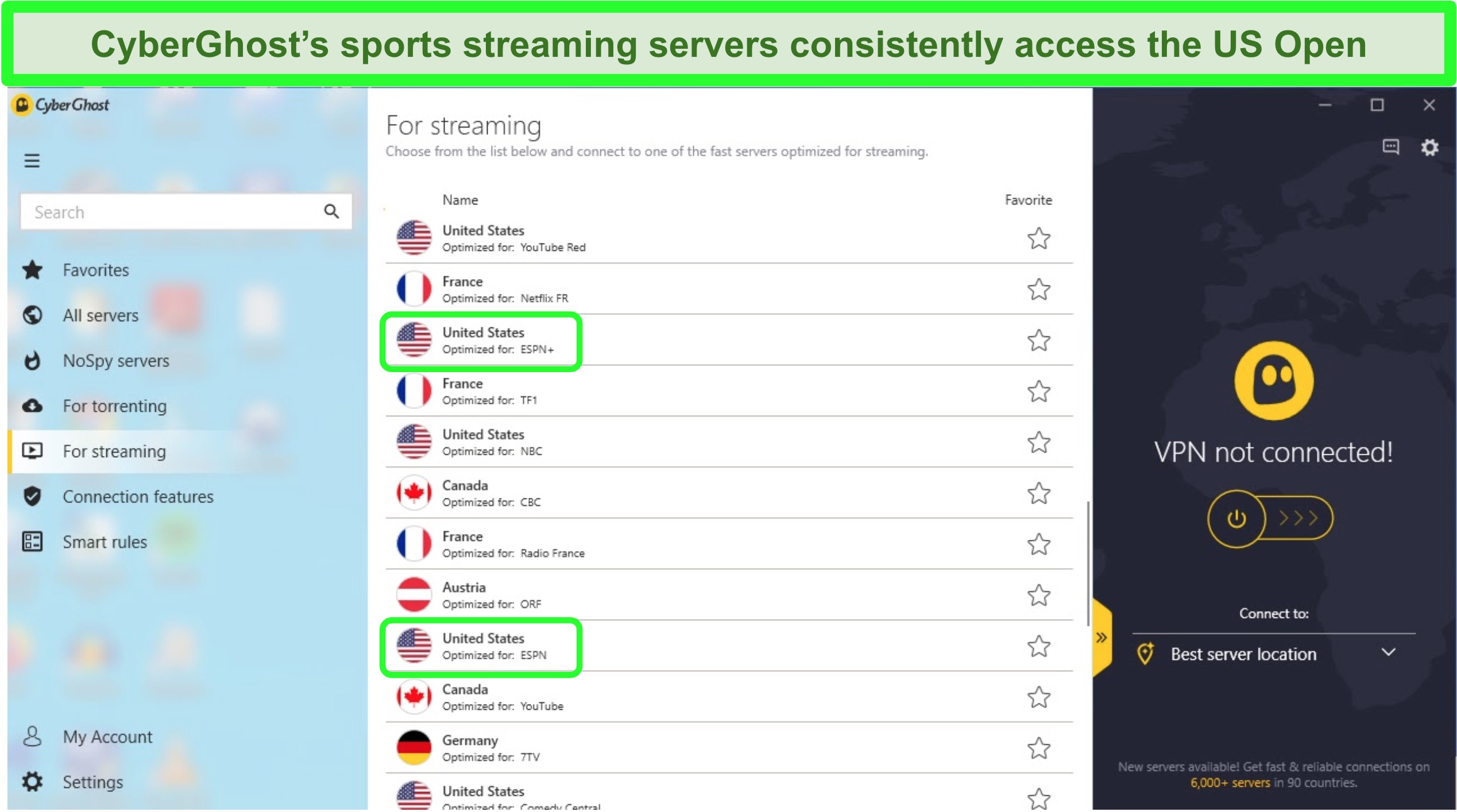 If you plan on watching the US Open on an unprotected WiFi network, its WiFi security keeps hackers from being able to harm your device. Whether you’re watching from a public or private location, you can rest assured CyberGhost will keep your data and identity safe.

Test it out yourself and decide if it’s a good fit for you. You can try CyberGhost for free for 45 days with its money-back guarantee. If you don’t like it, just contact customer support through the 24/7 live chat and they’ll refund your money.

Watch the US Open with CyberGhost now

Although there are some fast and secure free VPNs, I still wouldn’t recommend them.

Most free VPNs aren’t advanced enough to bypass sophisticated location blocks on streaming services that broadcast the US Open. Even if you find one that works, you’ll face annoying (and potentially threatening) issues like:

To prevent these issues and avoid paying for yet another subscription, you can use the money-back guarantees of the premium VPNs on this list. For example, ExpressVPN’s “no questions asked” policy means you can try it for free for 30 days and cancel in minutes within that time period. I reached out via live chat to get a refund and the rep processed my request without even asking what my reason was for cancelling.

FAQs on the US Open Tennis Grand Slam and VPNs

🤑 Can I watch the US Open for free?

Yes, there are free unlicensed streams available online — but you should avoid them at all costs. Not only are they hosted on sites that put nasty viruses and malware onto your device, but the video quality is terrible and their streams can be shut down at any time (even in the middle of a match!). In my experience, it’s not worth the hassle.

😃 What streaming sites will allow me to watch the US Open Tennis Grand Slam?

If you don’t have access to ESPN or the ESPN Player in your country, consider any of the options below to watch the US Open online:

As long as you have a local sports channel like ESPN or Eurosport that can broadcast the US Open, you can watch it on your TV. Services like Sling TV will also show the championships live, and they already work with popular Smart TV brands. Better yet, ExpressVPN works with most Smart TV brands like Samsung, Android, Apple TV, Sony, Fire Stick, Roku, Chromecast, and more!

In addition to unblocking sports streaming services, a VPN allows you to:

Without a VPN to access global streaming sites, you could lose out on seeing one of the most anticipated US Open Tennis Grand Slam events in years. Choose the wrong VPN and you’ll miss historic moments due to annoying delays — if it even unblocks the US Open at all. After I spent weeks testing the VPNs on this list to make sure they would work flawlessly for watching this year’s US Open, ExpressVPN was the top performer. It has the fastest servers for lag-free live streams, and you can try it out for 30 days risk-free with its money-back guarantee.