5 Best VPNs to Watch Netflix Japan From Anywhere in 2020

Since Netflix is constantly improving its VPN detection technology, only a handful of VPNs really unblock Netflix Japan. After I tested over 300 VPNs, I shortlisted the 5 best choices proven to have reliable connections and fast speeds for watching Netflix Japan. You can also try them for free for 30 days with their money-back guarantees. If you want a quick recommendation, NordVPN is my top pick for watching Netflix Japan in high quality and with the fastest speeds. You can try NordVPN for free with its 30-day money-back guarantee!

Try NordVPN for free for 30 days!

1. NordVPN — #1 for Netflix Japan With the Fastest Speeds

My top choice for watching Netflix Japan is NordVPN for its ultra-fast speeds. You can see in the graph below that it outperforms all of the VPNs on this list! (You need at least 5Mbps for full HD and 25Mbps for 4K streaming.) With NordVPN’s speeds, you’ll be able to watch in the highest quality your device supports without affecting your other online activities. 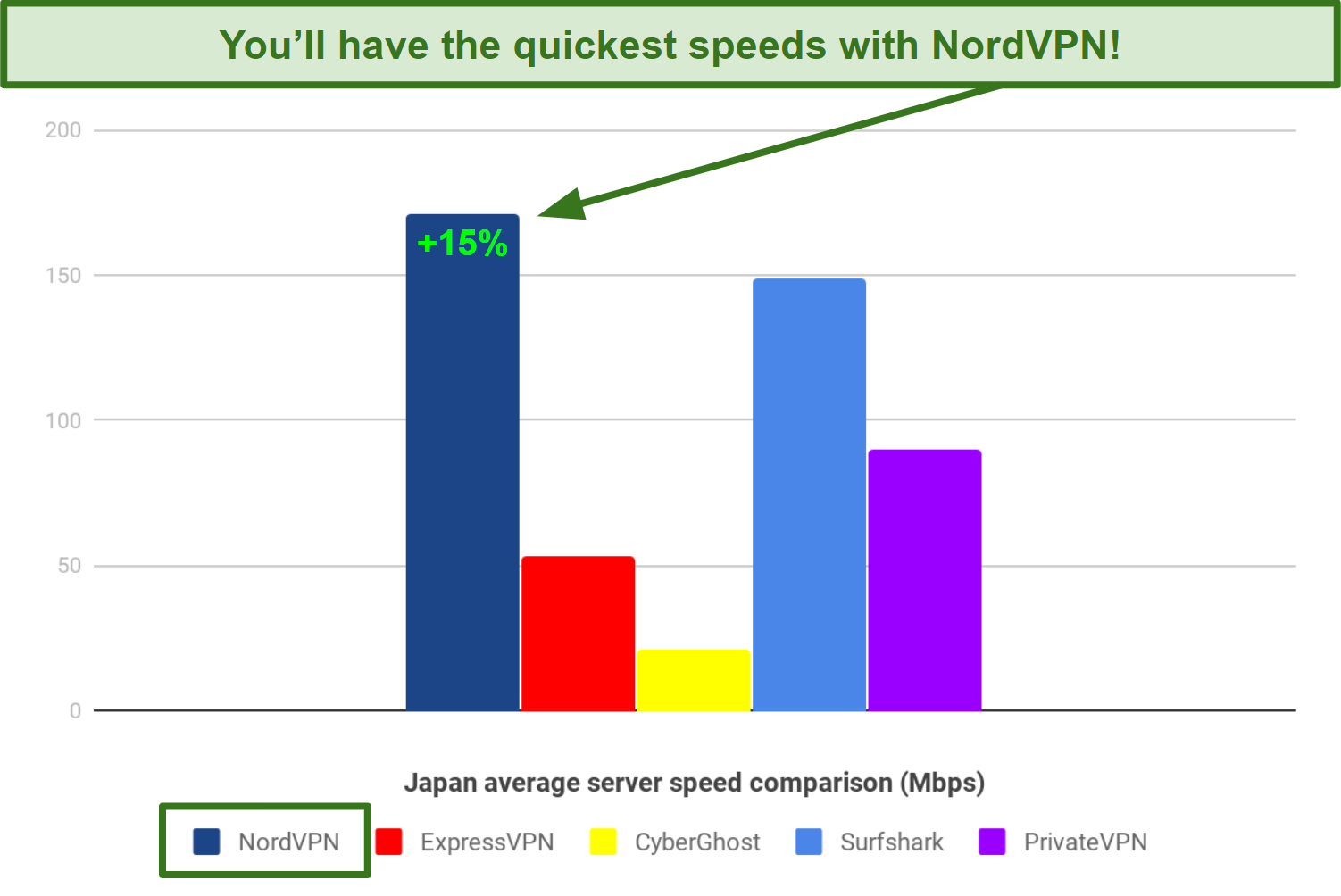 I had the fastest speeds for watching Netflix Japan with NordVPN

NordVPN’s built-in SmartPlay feature makes it easy to unblock streaming services in Japan from anywhere. All I needed to do was connect to a NordVPN server to immediately unblock Netflix Japan. I was able to avoid the annoying Netflix proxy error with servers #532, #458, and #426 in Japan. Then I could watch multiple episodes of Peace Nippon, Cowboy Bebop, and Demon Slayer: Kimetsu no Yaiba in high quality without any interruption or lag.

I was impressed with NordVPN’s extremely consistent loading times. Even though Japan is across the world (8,500+ km) from me, all of the streams had less than 5 seconds of buffering! Only Mobile Suit Gundam took a little longer at 25 seconds, but this was the only exception from over 30 streams I tested. While I usually have to wait at least 30 seconds when accessing local libraries with other VPNs, these waiting times are incredibly fast.

You’ll be able to share all these NordVPN features with your family or friends — a single NordVPN subscription can be used on 6 devices simultaneously! This covers all the most popular platforms, including Windows, macOS, Android, iOS, and more. 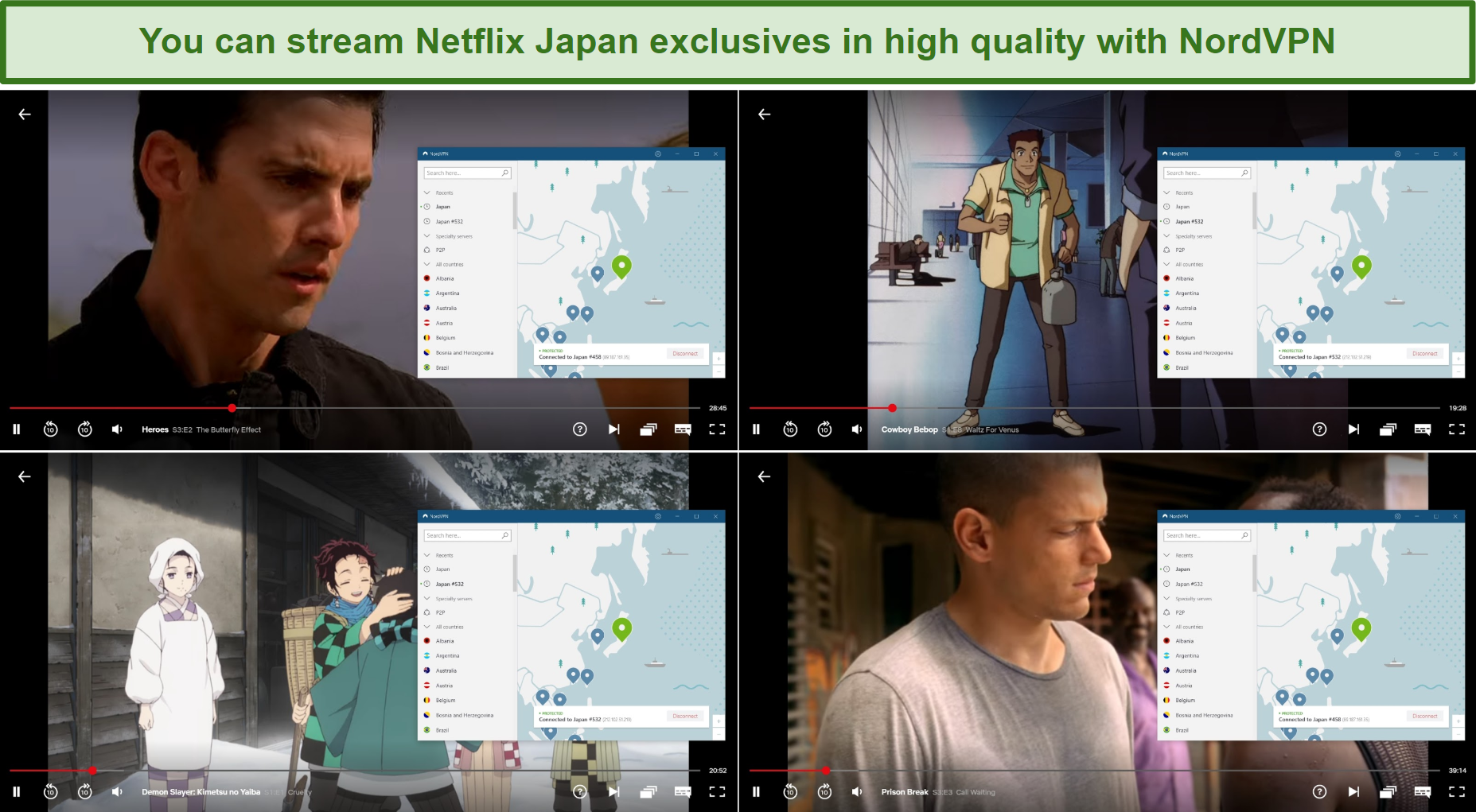 I had high-quality streams and fast speeds with NordVPN

You can try NordVPN’s high-quality servers in Japan for free for 30 days with its money-back guarantee. Simply request a refund through the 24/7 live chat for the fastest response — I’ve tested this myself and can guarantee it works. While the support team did try to troubleshoot any issues I had (unlike ExpressVPN’s no questions asked policy), I simply responded I didn’t need the service anymore. It only took a few minutes to get my refund processed and I got my money back within 5 days.

2. ExpressVPN — Save Time With the Shortest Buffering for Netflix Japan

I had the least amount of buffering with ExpressVPN’s servers in Japan. During testing, 90% of the streams loaded instantly — even the longest buffering time I experienced was just 2 seconds! This is even more impressive since I’m located on the other side of the world, which usually means slower speeds with other VPNs. You’ll have more time for watching rather than staring at the endless spinning circle!

Although ExpressVPN’s overall speeds aren’t as fast as NordVPN’s, I had speeds far above Netflix’s minimum requirements for 4K streaming. You’ll be able to watch in the highest quality without slowing your browsing or download speeds. This makes it convenient to multitask while I watch my favorite shows lag-free. 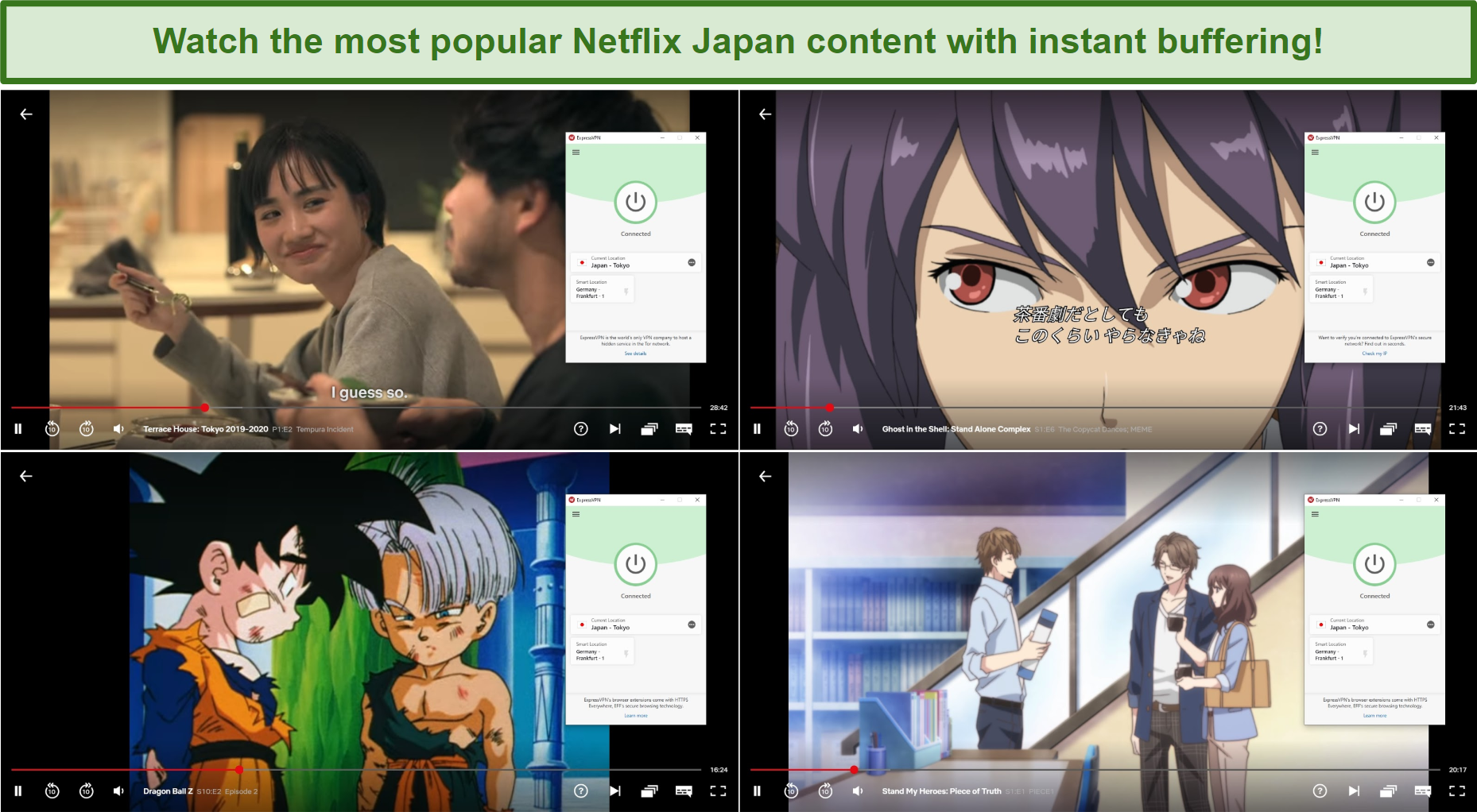 You can watch Netflix Japan with minimal buffering with ExpressVPN

You can use ExpressVPN on 5 devices simultaneously, allowing you to watch on all of your devices at once. During testing, I was able to watch Heroes on my Windows PC and Terrace House on my Android at the same time. Whether you use 1 or 5 devices at once, you won’t notice a difference in the quality of streams!

The only drawback is that ExpressVPN has a more premium price than the other VPNs on this list. If you’re a big Netflix fan like me, it’s worth paying a little more for no buffering. Before subscribing, you can try ExpressVPN for free for 30 days with its money-back guarantee. The best part is that you can get your refund with no questions asked! I tested its features for 18 days then requested to cancel my subscription through the 24/7 live chat. The customer support agent immediately processed my refund without questions (as promised) and I got my money back in my account within 5 days.

I had high-quality streaming with CyberGhost’s optimized server for Netflix Japan. CyberGhost regularly updates this dedicated Netflix server so you can reliably access exclusive Japanese shows and movies from anywhere. While I tested this server over several weeks, I never encountered any streaming errors or low-quality streams.

You’ll be able to watch Netflix in full HD and even 4K quality with CyberGhost’s speeds — even though they were the slowest on this list. While watching The Promised Neverland, my streaming quality was grainy before increasing to full HD within 30 seconds. 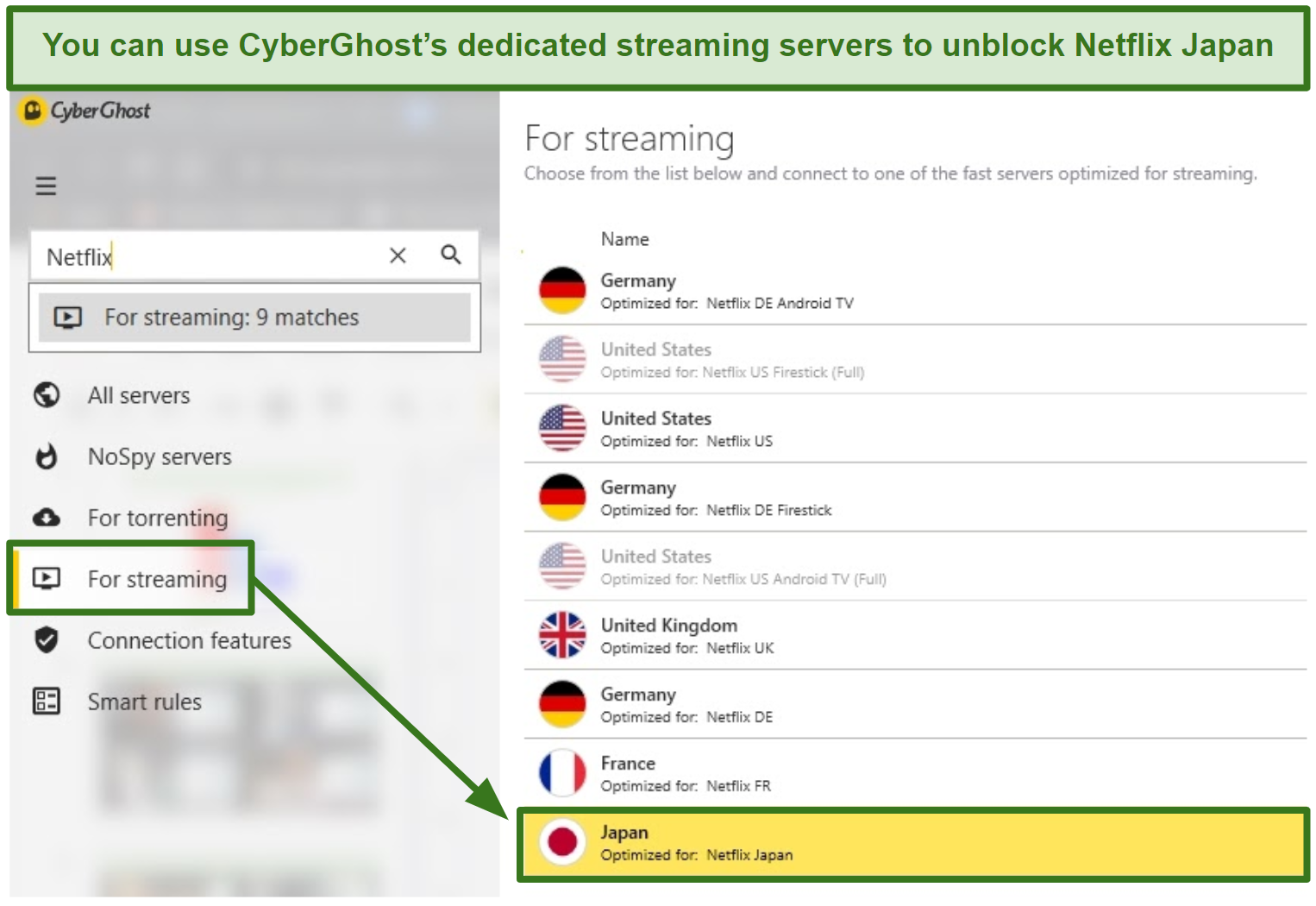 I didn’t have any problems unblocking Netflix with any of CyberGhost’s servers for Japan. The only difference I noticed was the buffering times took twice as long with the normal server (20 seconds) than with the optimized server (10 seconds). While its normal servers in Japan were the slowest on this list, I still was able to watch Japan Sinks: 2020 in HD without using a lot of bandwidth. Fortunately, I didn’t have any lag throughout the rest of the show.

You can try CyberGhost’s optimized streaming servers for free for 45 days with its money-back guarantee. Simply contact customer support through live chat, ticket, or email to initiate a refund. When I tested the 24/7 live chat to cancel my subscription, the agent asked what was wrong with the service. When I responded I just changed my mind, my refund was approved. Then I got my money back within the same week.

4. Surfshark — Unblock Netflix Japan on Unlimited Devices at Once

Surfshark has a rare feature among VPNs — you can watch Netflix on an unlimited number of devices at the same time! This is great for sharing your subscription with your friends or family who enjoy anime as much as you do. I tested streaming Dragon Ball Z simultaneously in the highest possible quality on 4 PCs, 2 phones, a Fire Stick 4K, and an iPad. Even with multiple devices connected at the same time, I didn’t have any interruptions to my connection!

I was happy with Surfshark’s speeds — only 13% slower than NordVPN’s fastest speeds. My average buffering times were just under 30 seconds. This was slightly longer than the other VPNs on this list.

You can check out Surfshark’s unlimited device connections for free for 30 days with its money-back guarantee. I’ve gone through the process myself and got a refund through live chat in 5 minutes flat.

You can easily connect to PrivateVPN’s dedicated server for Netflix Japan to get the best streaming quality. All I had to do was double-click on the local optimized server and I was able to watch Legal V Ex-lawyer Shoko Takanashi in HD. 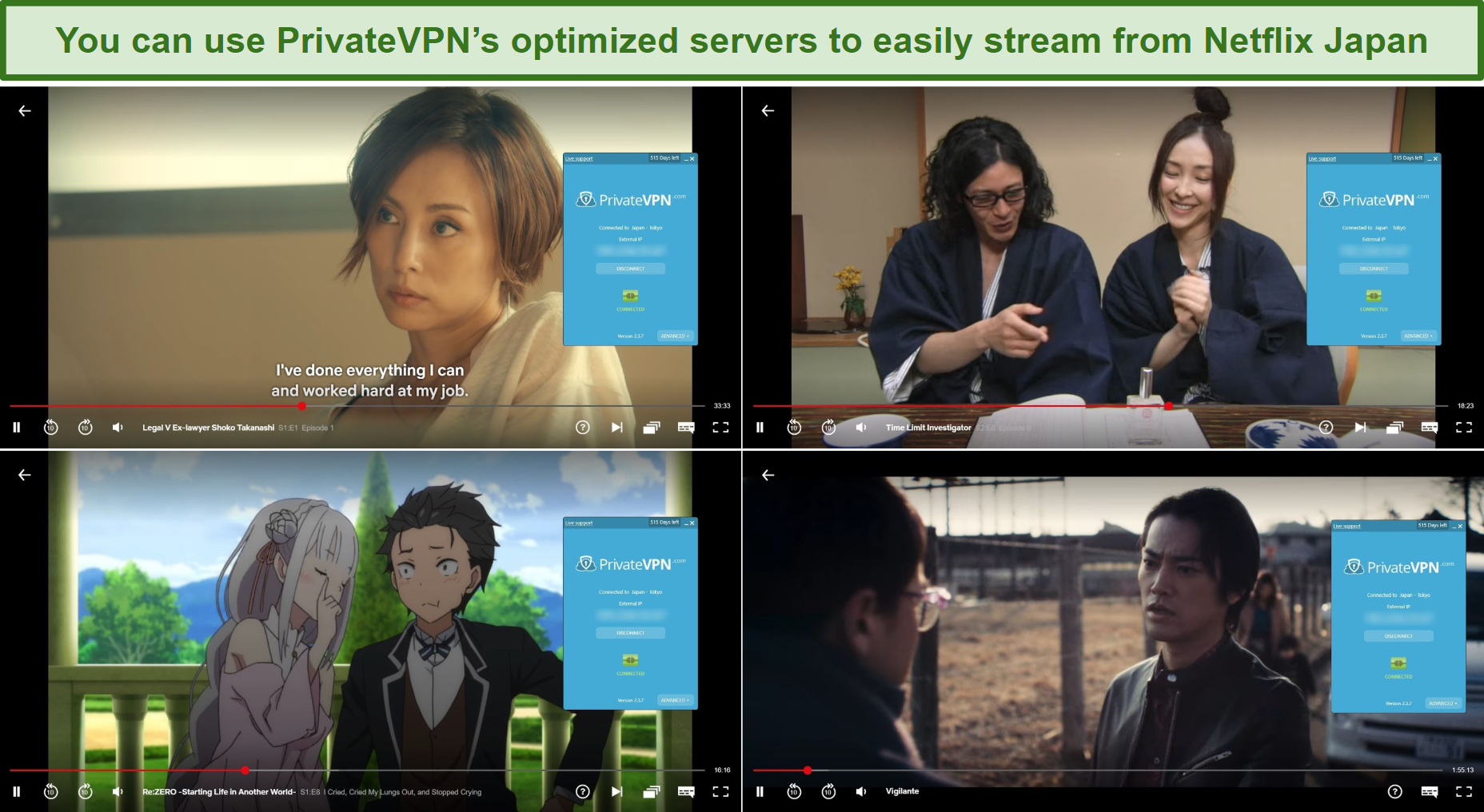 Since PrivateVPN has the smallest server network on this list, I was surprised that I experienced a very stable service — lag and connectivity issues were nearly non-existent! During my tests, its servers outperformed 2 of my top 3 VPNs (though NordVPN was better). If your device supports 4K, you can watch in high quality without impacting your other online activities. After I streamed Vigilante and Legal V, I was glad that all the streams only buffered for 10 seconds or less.

You can try PrivateVPN’s dedicated Netflix Japan server for free for 30 days with its money-back guarantee. As long as you request a cancellation within the trial period, you can get your refund by submitting a ticket to customer support. You’ll get a response through email within a few business days.

How to Watch Netflix Japan From Anywhere in 3 Easy Steps

Try NordVPN for free for 30 days!

Why You Need a VPN to Watch Netflix Japan From Abroad

Copyright holders license their content to specific Netflix countries, so anyone trying to connect from outside of these licensed countries is blocked. A VPN gives you a new IP address (a digital identifier linked to a specific country) based in a different location. If you connect to a server in Japan, then you can access Netflix Japan from anywhere!

It’s annoying when I can’t catch up on 7 Seeds while I’m living overseas. Instead of risking my online safety by torrenting from unknown sources, I use a VPN to protect my Windows PC while unblocking my favorite show from the other side of the world.

How to Choose the Best VPN for Watching Netflix Japan

When choosing a VPN for streaming, I make sure it has the following features:

Get NordVPN for free for 30 days

🔍 What’s the difference between Netflix in Japan and the US?

Netflix Japan has surpassed Netflix US in having the most shows and movies (over 6,000 compared to a little over 5,500) in recent years. Copyright holders have licensing restrictions that only allow certain titles to be available in Japan, so this means they’re not accessible from abroad. Some shows and movies are also available depending on higher demand in Japan. Several of these are available in Japanese or English with Japanese subtitles.

You can find these exclusive shows and movies on Netflix Japan:

💰 Can I watch Netflix Japan with a free VPN?

It’s possible to use a free VPN, but I don’t recommend it at all. Free VPNs aren’t ideal for watching Netflix since they:

It’s possible to avoid all of these issues risk-free if you try NordVPN for free with its money-back guarantee. This means you can watch Netflix Japan then get a refund within 30 days if it’s not right for you. It took less than 5 minutes for the live chat agent to process my refund request. Then I had my money back in my bank account within a few days. 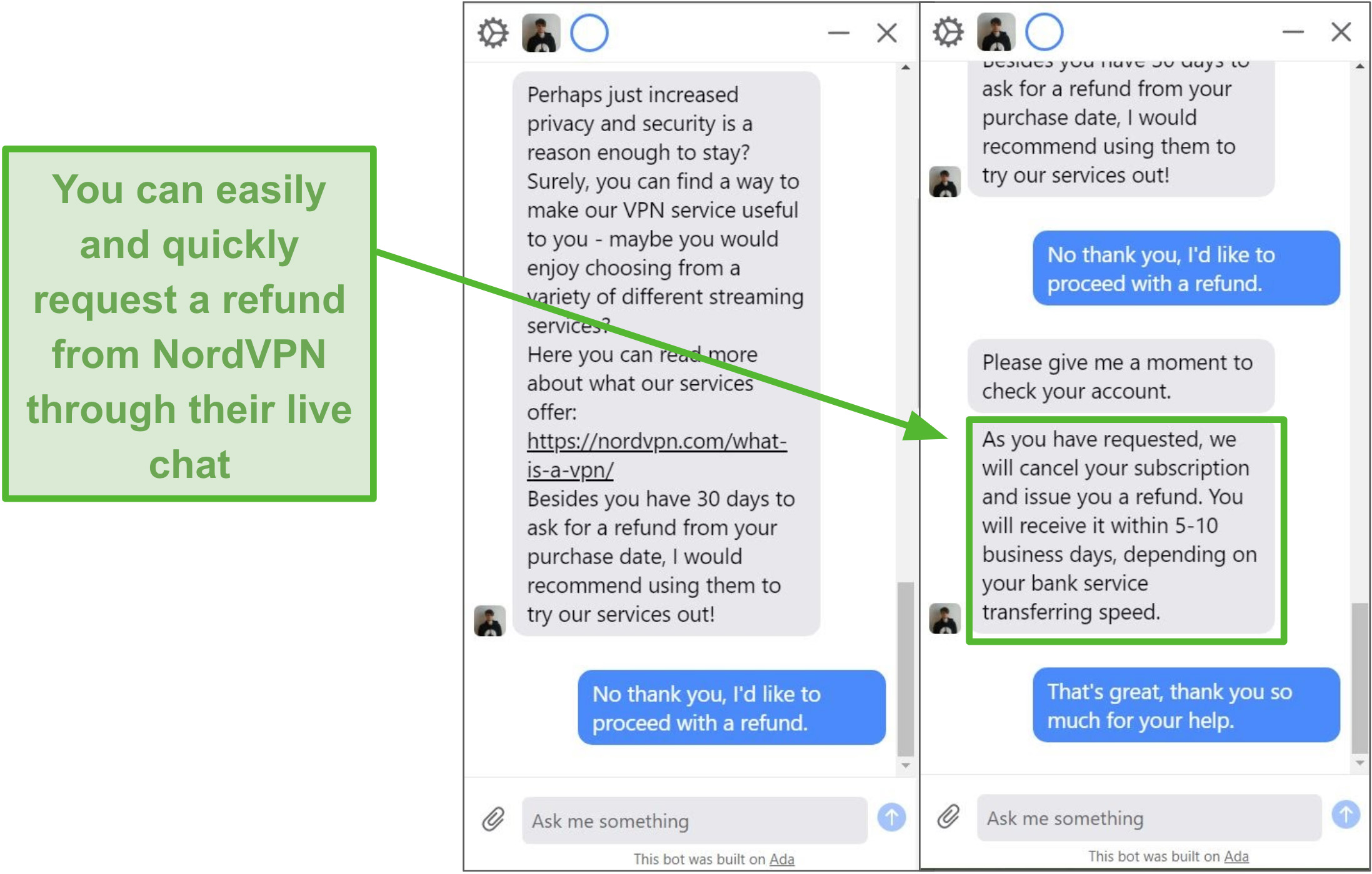 🕵️ Does all content on Netflix Japan have English subtitles?

Not quite, but 99% of the content I tested had English subtitles. While some content (especially anime) is only available in Japanese, you can read more about how to get Netflix subtitles in your preferred language.

Save on a VPN to Watch Netflix Japan From Anywhere

You can check this coupon page for the most up-to-date deals on VPNs for unblocking Netflix Japan. Additionally, all providers on this list have 30-day money-back guarantees — try them with zero risk!