How to Make Your Own VPN in Linux in 12 Steps

If you want to enhance your privacy and avoid putting your data in the hands of a VPN service provider, then you can create your own VPN. The process of doing so won’t require you to be a programmer, but it’s a bit technical and it will take some effort.

In the end though, it will be worth it, and you will end up with a secure and private VPN that you can dispose of any minute.

Note: This process involves setting up your own server instance on DigitalOcean, which just like any other hosting service, will charge for bandwidth use.

Step 1: Get a Remote Server that Runs Ubuntu

This involves creating a server on the cloud.

There are many hosting services that you can choose from, but the most user-friendly is DigitalOcean, and it’s also the most affordable. 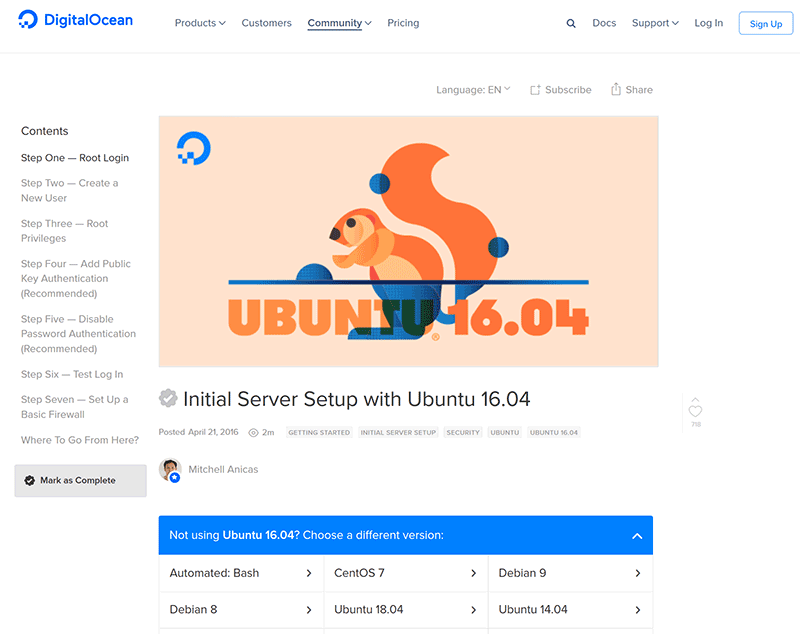 Now that your server is up and running, we need to install OpenVPN on it. The first thing you need to do is log in to the server by providing your credentials through a command prompt.

After that, execute the commands below. You can type or copy/paste them.

You have now installed both OpenVPN and easy-rsa, a package that is necessary for step 3.

Trusted certificates are important as they ensure that the outgoing traffic is encrypted. Normally, these certificates come from the Certificate Authority (CA), but because we are running and managing our own server, we can set up a simple CA directory on our server.

Execute the command below:

Now, navigate to the folder we have just created by typing the following command:

Now, we need to edit our CA. To open a text editor that displays the vars file, enter:

Now, look for the following lines:

Edit the quoted strings to reflect your details. Make sure you don’t leave any of them blank.

After that, scroll down to find the KEY_NAME line. Edit it to match the one below:

You can now save and close the file.

Now that we have the right information in place, we can go ahead and create the Certificate Authority. Ensure that you are still in the CA directory.

Enter the command below:

If the process executed correctly, you should see the following on your screen:

NOTE: If you run ./clean-all, I will be doing a rm -rf on /home/sammy/openvpn-ca/keys

Clear out the environment by entering the following:

You should get a series of prompts as your server executes the instructions you’ve just provided. Just press enter at each of them till the process completes.

Now that we’ve created our Certificate Authority, we can start generating actual encryption keys. The first thing we need to do is create the OpenVPN server certificate along with its key pair:

The server will suggest some values. Accept them all by typing “y”. Be sure to do the same when asked about certificate creation.

Next we’ll create a few other miscellaneous files OpenVPN needs to operate. Use the following command:

This can take some time, but wait until it’s done. After that, type the following command to create a signature for strengthening the verification process.

Here, we’ll create a certificate and key pair for connecting your Linux computer. Use the following commands:

Use the suggested defaults by hitting enter at the prompts.

Now that we have all the certificates and key pairs we need, we can finally start setting up OpenVPN.

The first thing we need to do is move some of the files we just created to the “openvpn” folder:

Now we’ll add a sample configuration file so we can open and edit it ourselves:

After its unzipped, type the following to open the configuration file:

With the server.conf file open in the nano editor, look for the line below:

Uncomment the line by removing the semi-colon at the beginning.

On the line directly below it, add the following:

Now, scroll to find the section filled with ciphers (keys). Here, we need to choose the security strength we need. Select AES 128 bit by finding the line below and uncommenting it (removing the semi-colon).

Just below that line, add the following:

Next, uncomment the user and group settings. They are the lines below:

Push DNS Changes to Redirect All Traffic through the VPN

While the settings we have already created will tunnel your traffic, they won’t force any connections to use the tunnel. To force all your traffic to the VPN tunnel, you’ll need to push the DNS settings to the client computers.

To do this, we need to uncomment the directives listed below. Find them and remove the semicolon.

Just below that line, find the dhcp-option section. Again, uncomment the two lines

These settings will make the clients reconfigure their DNS settings to always use the VPN tunnel as the default gateway.

Adjust the Port and Protocol

Now, we need to change the port that OpenVPN will use. By default, it uses port 1194 and the UDP protocol. To make the VPN more inclusive, let’s use port 443 which is rarely restricted by firewalls. Search for the #Optional! line and change the port to 443.

After that, change the protocol from UDP to TCP

After that, save and close the file.

To ensure that OpenVPN routes traffic correctly, we need to do some edits.

The first thing is to allow IP forwarding. This can be done by modifying the /etc/sysctl.conf file. Open it.

Find the line below and remove the ‘#’ character to uncomment it.

Save and close the file.

Now, run this command to adjust the values.

Now, we need to set up our server’s firewall so that it can properly manipulate traffic. Let’s start by finding the public network interface of our server machine.

At some point, the output line produced will include the word “dev”. What follows after that should be your interface name. For example in the line below, w1p11s0 is the interface name.

Now, we need to add the name above to its appropriate place by editing the rules file. Enter the command below:

Look for the block of text that begins on the following phrase which has been commented out:

Below it, you’ll see a line that starts with “-A POSTROUTING”. This is where you need to add the interface name. Replace the XXXX with it.

Now save and close the file.

After that, look for the line marked “DEFAULT_FORWARD_POLICY”. Change “DROP” to “ACCEPT”. After that, it should look like the following:

Save and close the file.

Lastly, adjust the firewall settings to allow traffic to OpenVPN. Use the commands below:

To load the changes, disable and then re-enable the firewall.

Your server is now set up to handle your VPN traffic. You are almost there!

Since you’ve already set up the basic configurations, you can now start OpenVPN to get your server going.

To ensure that OpenVPN always starts every time your server boots, enter the following command:

We need to make the server ready to accept any devices that you’d like to connect. First, we need to create a directory to hold client related files, then change permissions to lock it down.

Now we’ll copy an example configuration file and then edit it:

Open the file in a text editor:

Scroll to find the line that starts with the “remote” directive. Edit it to reflect port 443 which is the port we are using:

Below that, change the line marked “proto” from UDP to TCP

Remove the semicolons from the “user” and “group” lines to uncomment them:

Locate the ca, cert, and key lines and comment them out by adding a hash at the beginning. They should look like this:

Change the “cipher” and “auth” settings to match the ones we set above. They should look like this:

Now, add a line anywhere in the file and type:

Lastly, copy and paste the following commented out lines into the bottom of the file:

Save your changes and exit the editor.

The last thing we need to do is to create a script that will compile everything that we’ve made. Start by creating a file in the ~/client-configs directory called “make_config.sh”, then open it using nano. Paste the following code into the script:

Save the file and exit. Now, make it executable with this command:

Step 12:Configure your VPN on Linux

To use the VPN you’ve just set up, install OpenVPN on your computer using the commands below:

We now need to open and edit the configuration file we’ve just downloaded:

Save and close the file. You’ve now set up your Linux computer to connect to your VPN.

To connect to your new VPN, execute the following command:

You should now be connected to your VPN!