Warning! Netflix is actively blocking VPN servers trying to bypass its geographic restrictions. You need a reliable VPN to access Netflix outside of your location on your Amazon Fire Stick.

Netflix is available in over 190 countries, and each has hundreds of movies and shows for you to enjoy on multiple devices. However, Fire Stick is only supported in the US, Canada, the UK, Germany, Austria, Japan, India, France, Italy, and Spain.

Due to broadcasting rights and geographic restrictions — depending on where you are, you’ll be blocked from streaming Netflix on your Amazon Fire Stick. 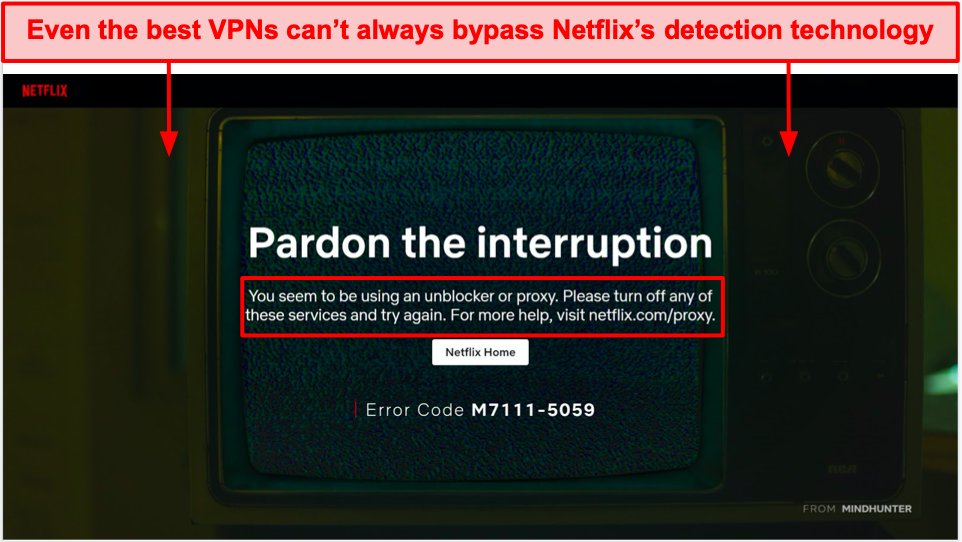 Netflix’s error message when it detects a VPN server

Even worse, although a VPN will hide your true location — Netflix is actively tracking and blocking VPN servers.

To save you time and energy, I’ve tested over 15 VPNs with Netflix. Each of my top 3 VPN recommendations will help you avoid the error message and enjoy Netflix on your Amazon Fire Stick from anywhere.

Stream Netflix on your Fire Stick with NordVPN

All of my recommended VPNs have a native app for Fire Stick (an app that you can install directly to your device).

Tip: Most native VPN apps only support 2nd or 3rd generation Fire Sticks. If you have an older model, you won’t be able to connect to a VPN using an app — you’ll have to install it on your router instead.

1. On the Fire Stick home screen, use the search tab to find the VPN app you want to install. I used NordVPN and found it easy to download and set up on the Fire Stick.

5. Connect to a server based on which country’s Netflix you want to watch.

6. Once you’ve connected, you can open the Netflix app on your Fire Stick and start streaming Netflix content!

When you use a VPN app, you can trust that it will maintain a secure connection without compromising your privacy. After you click “OK,” you’ll be able to connect to a foreign server and start streaming Netflix.

Watch Netflix from anywhere with NordVPN

If your VPN doesn’t have a native app, you can sideload the VPN onto your Fire Stick using an Android device or install it on your router.

Option #1 — Download the VPN app using an APK (.apk) with an Android device

An APK is an app that is created for Android. If the VPN you want to use doesn’t have a native Fire Stick app, you can download an APK file from the VPN’s website. Here’s how:

1. Use the Fire Stick’s search function to find the Downloader app. 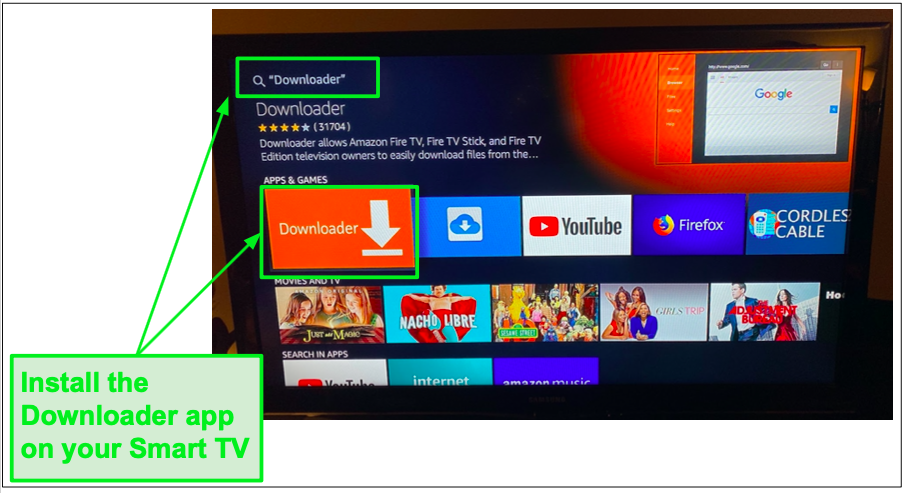 3. Launch the app and enter the web address of the VPN you want to use (like www.nordvpn.com) into the “Browser” option. 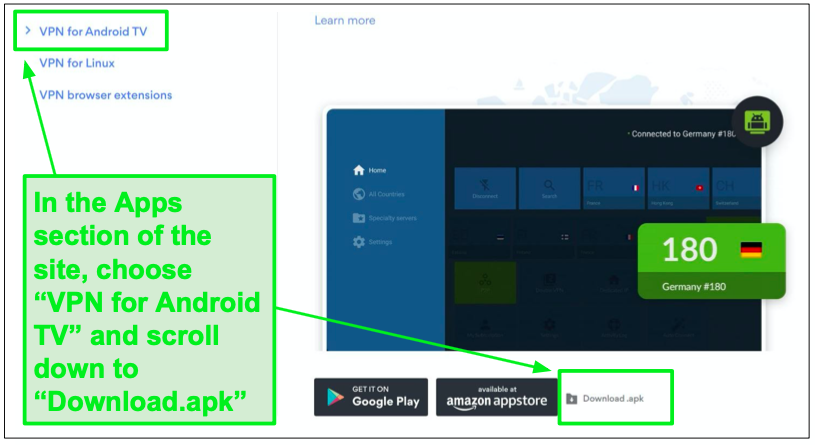 5. Download the APK (.apk) and approve all permissions. The app will be installed on your Fire Stick.

6. Launch the VPN, sign in, and connect to a server.

To download the VPN app this way, you’ll have to use a second Android device (like an Android smartphone or Fire Tablet).

Here’s how you can locate the app on your Fire Stick to launch your VPN:

1. On the main menu of your Fire Stick, go to “Settings” and then “Applications.” 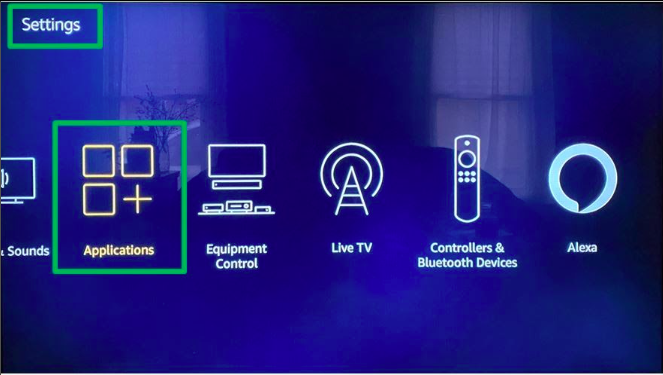 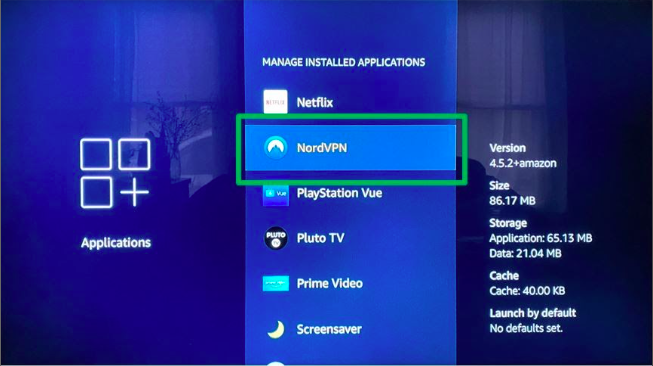 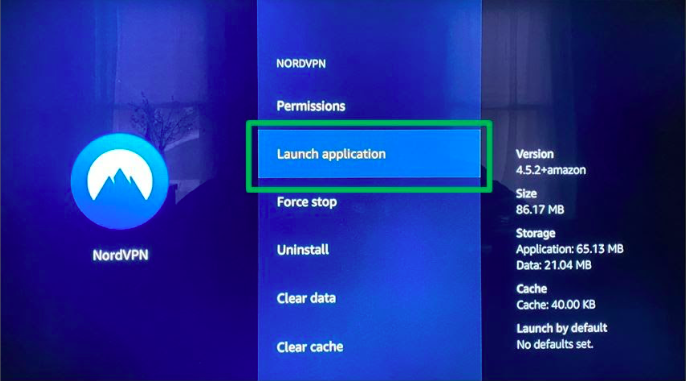 4. Connect to a server and you’re ready to start streaming Netflix!

Stream Netflix on your Fire Stick with NordVPN

If you’re looking for the latest and most popular shows and movies, Netflix US has the most content to choose from. It offers over 4,000 movies and more than 1,700 TV shows — three times as many TV shows as the UK library!

By using a premium VPN, you can connect to Netflix US and gain access to Netflix originals before they’re available anywhere else.

Watch Netflix US with NordVPN

How to Choose the Best VPN for Amazon Fire Stick

When you’re choosing the best VPN to use with your Amazon Fire Stick, there are a few things you should consider:

After testing a range of VPNs using the criteria above, here’s a list of the 3 best VPNs for watching Netflix on your Amazon Fire stick.

Get the best VPN for Amazon Fire Stick

NordVPN is my number one choice for watching Netflix on the Fire Stick because it has thousands of reliable servers. Its SmartPlay feature ensures that its servers can access blocked content by using DNS technology to mask your IP address. I tested this for myself and found that I could consistently connect to Netflix.

Once I accessed Netflix in main locations like the US, UK, and Canada, I tested server speeds and streaming quality. Although I’m testing from the US, servers in the UK gave me the fastest average speeds. My fastest server was UK #1575 at 60Mbps. The Canada (54Mbps) and US (51Mbps) servers were slightly slower, but still fast enough for streaming in Ultra HD.

NordVPN servers were all fast, but my UK connection was the fastest

Downloading and installation is easy on NordVPN’s native Fire Stick app. The app has an intuitive interface with all settings and connections clearly labeled. Choosing a server is simple — I could connect to the region of my choice with one click and “Favorite” fast servers for future use.

The customer support team is very knowledgeable. When I spoke to a representative on the 24/7 live chat about setting up the app on my Fire Stick, they were able to link me to relevant information. NordVPN’s website has comprehensive setup and troubleshooting guides for the Fire Stick if you need help.

NordVPN gives new subscribers a 30-day money-back guarantee. You can try its services for a month risk-free and get a full refund through the customer live chat.

ExpressVPN is one of the best VPNs for streaming Netflix in UltraHD. During my tests, I could bypass Netflix’s strong restrictions and stream in high quality almost instantly. I experienced minimal buffering, with less than 5 seconds between choosing my content and streaming it.

I tested multiple servers in the US, UK, and Canada — my connection to the UK was the fastest (even though I’m in the US). With each region, I experienced some slowdown at peak connection times, but not enough to make a noticeable difference.

My average UK server connection speed was 74Mbps on average. My fastest UK server was UK – Docklands at 87Mbps. As for my US connection, my average speed was 65 Mbps, with the fastest server being USA – Washington DC at 71Mbps. Although it took me longer to connect to Canada, once I connected my speeds were fast, with an average of 73Mbps. My fastest server was Canada – Toronto at 76Mbps.

I found it easy to get connected with ExpressVPN’s native Fire Stick app. Installation and setup only took a couple of minutes and the Fire Stick app is very similar to its desktop and mobile versions. It’s easy to navigate and connecting to a server takes a single click on the power button.

ExpressVPN’s 30-day money-back guarantee is easy to use. I contacted customer support for a refund within the 30 days and they processed it with no questions asked.

3. CyberGhost — Optimized Servers for Streaming Netflix in the US, UK, and France 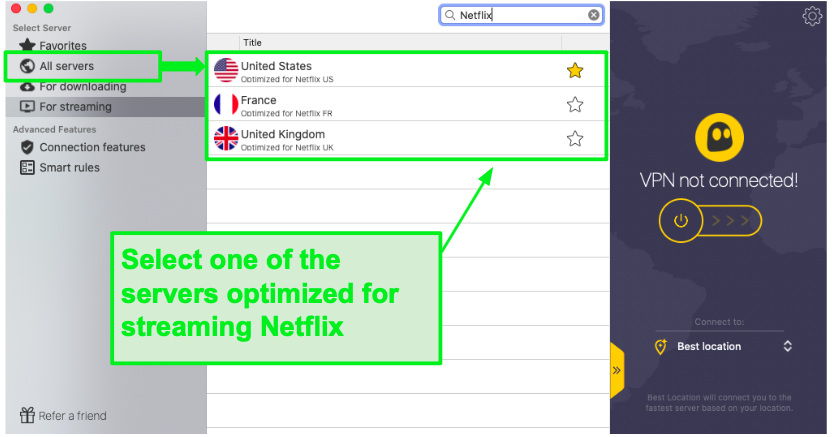 My average download speed for each Netflix server was 45Mbps. This is slow compared to the other VPNs on my list, but still fast enough for streaming Netflix in HD from each location.

The fastest connection was to its Netflix US server at 47Mbps. I’m located in the US, which may be why this server is slightly faster compared to the others. However, I found it hard to connect to the Netflix US server during peak times as it was often full.

Unfortunately, while testing standard servers in the US, UK, Canada, and South American countries — I got the Netflix proxy error several times. I recommend saving servers that work to your favorites list so that you can automatically connect to them later.

That being said, CyberGhost offers a 45-day money-back guarantee for new subscriptions. You have plenty of time to try out the service before purchasing a plan with this VPN.

Can I Use a Free VPN to Watch Netflix on Amazon Fire Stick?

Yes, there are some free VPNs available, but I wouldn’t recommend using one to watch Netflix on your Fire Stick. I tested free VPNs like TunnelBear and Hide.me — I couldn’t bypass Netflix’s geographical restrictions.

Free VPNs have bandwidth limitations that won’t let you stream as much Netflix as you want. Most also have few servers, which means you’ll experience slow speeds, buffering, and lags.

Even worse, many free VPNs have limited privacy policies. They can keep logs and sell your online activity to third parties or expose your device to malware.

If you want a free VPN to use for a short time, you can use a premium VPN’s money-back guarantee. If you cancel your subscription before the guarantee is up, you’ll get all your money back. This way, you don’t compromise on your Netflix streaming or data security.

Try a premium VPN for free!

Get the Most Out of Your Fire Stick

You can use your Fire Stick to stream a lot more than Netflix! Many Fire Stick users have chosen to replace their cable subscriptions with various streaming services.

You can stream with paid services like Amazon Prime, Sling TV, and Hulu Live. But, there are also free apps available on your Fire Stick like Cinema APK, CatMouse, and CyberFlix TV. Remember to use your VPN with free streaming apps to protect you and your devices from malware and other cyber threats.

You can also download Kodi, a powerful open-source tool that works with both local and network services you already have. You can use it to stream and record live TV as well as to store your favorite programming. But, make sure to use Kodi with a VPN to keep your data protected.

Tip: SlingTV and Hulu Live require a payment method linked to a US location. To subscribe from anywhere — purchase a gift card for either service and use it to set up your account.

Protect your devices while streaming

If you want to access the whole Netflix library and use your Fire Stick securely, you need a premium VPN. With a service like NordVPN, you can access restricted content from around the world no matter where you’re located. Some of your options include BBC iPlayer in the UK, Hulu Live and Sling TV in the US, or Hayu in Europe.

Using a VPN isn’t limited to just your Fire Stick! You can install a premium VPN on multiple devices at the same time — NordVPN secures up to 6 devices on one account! By using the money-back guarantees of my recommended VPNs, you can test each feature for yourself before you commit to a plan.