Fake news became a global phenomenon during the US presidential election race of 2016, but it was around long before then.

It has been around for centuries and is a type of propaganda tool used to spread hoaxes and disinformation. The rise of fake news correlates with the increase in technology as more stories can reach more people within minutes. Today it rules supreme on social media and the internet and has even found its way into traditional broadcast and print media, becoming a part of daily news and political reports.

You can filter through news by thinking critically about the information, assessing how reliable the source is, fact-checking and researching. This way, you will be able to use your discretion to decide whether you’re going to believe the information being fed to you.

Fake news is created to deceive. It’s generally well written with one of two goals in mind, to miss-lead or hurt an opposing side. Not only can it be extremely damaging on the one hand, but hugely beneficial on the other.

Now viewed as a dangerous trend which is spiraling out of control, the general public finds it increasingly difficult to pinpoint what is real or fake news, what is fact or fiction, and what is truth or lies. This is affecting the validity of all stories, making it hard for any actual news to be taken seriously.

So, can you tell the difference between real and fake news?

1 What Is Fake News?

Fake news can broadly be defined as false information. It is comprised of information designed to mislead readers, for either social, political, or financial gain.

It can be defined into two categories; 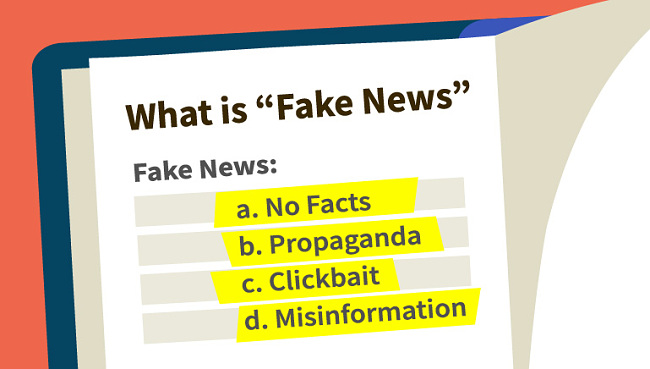 2 How Long Has Fake News Been Around?

The concept of fake news has been around for centuries, as we humans have always loved to gossip. The term ‘fake news’ was brought into the spotlight in the 2016 US presidential race involving Hillary Clinton and Donald Trump, where Donald Trump famously claimed accusations against him were merely ‘fake news.’

3The Growth in Fake News

In the past century, the growth in fake news has been exponential. From humble beginnings with ill-fact checked newspapers, to the increase in the magazine industry. Chain emails became popular in the early 2000s, and the threat of social media has become the focal point for fake news today.

Over the past 20 years, it has become increasingly easier to share information, both true and false, and more recently, on a larger scale. Platforms such as Facebook, Twitter, Instagram, and Snapchat act as catalysts. Today, the false material can ‘go viral’ before anything is even fact-checked. 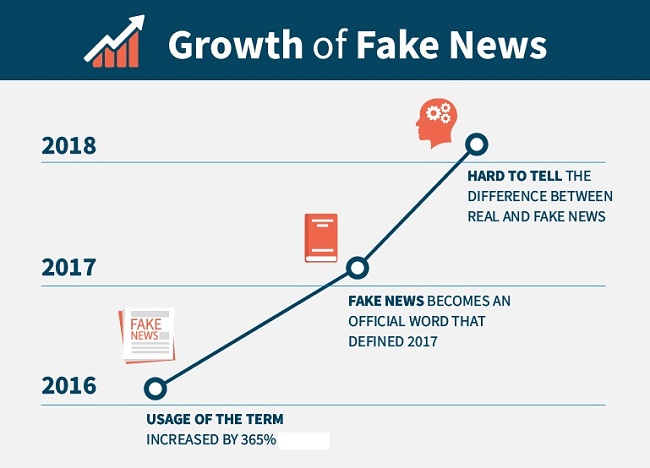 4How Can It Spread?

With modern technology, fake news can be circulated instantaneously. It can be spread via initial miss-information, spiraling to become a web of fake news across the internet. Multiple publications can report on the same piece of false information which then appears to another author as being verified by numerous sources. An example of this is when a 1998 paper on how routine child vaccinations can lead to autism, inspired an entire anti-vaccination movement.

Despite critics discrediting the article later, the original paper was used as a source for multiple papers to follow, making the web impossible to unravel. As more user come to rely upon external information, an unverified fact can make its way into an article which may later be added as a citation. 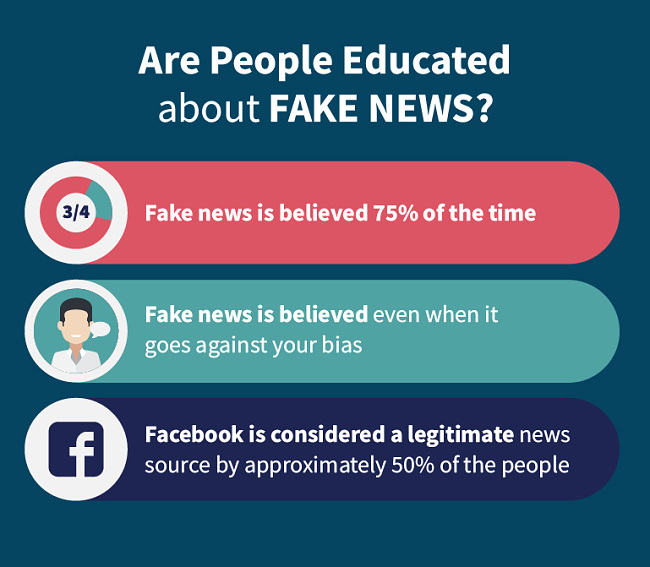 5Can You Trust Your Local News?

Since the advent of the fake news phenomenon, the trust levels in news outlets has dropped significantly. According to the Reuters Institute For The Study Of Journalism, trust levels in the news vary by country. The study found that people in the West are more inclined to trust their media sources due to having well-funded broadcasters. The highest level of trust was seen in Finland with 62%, while trust levels in American news organizations reached only 38%.

Fake news can often be persuasive, hence why it is such a big issue in today’s society. Many fake news stories are written to create ‘shock’ value or to impress the reader. This is why developing a critical mindset is essential to keep your emotional response to such stories, in check.

Think critically, not irrationally. Ask yourself one major question, “why has this article been written?” If you can think it could be trying to persuade you of an individual viewpoint or is acting as a marketing ploy to purchase a product, then it’s likely that the news is fake. 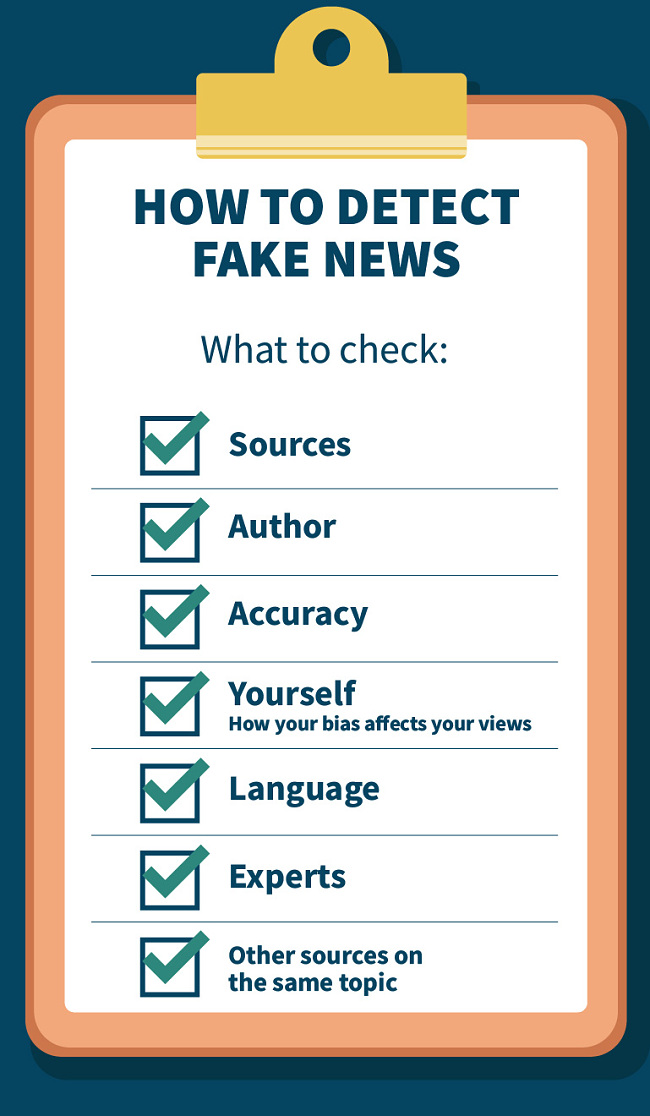 Checking the source of an article is a useful way to determine the likelihood of it being fake news. Uncommonly found sources are likely to be perpetrators, so if you come across a story from a source you’ve never associated with before, do some research! You can start by googling the authenticity of the source and finding out more about its professionalism. If you discover it is coming from a reputable news agency, you may be in the clear. However, if you find out it’s a personal blog, you may need to do some fact checking.

You can detect a dodgy source by their pages URL. If they use an odd-sounding URL with uncommon extensions, excluding .com, .co, or .gov, they may be a suspect.

If you think there is a possibility that you are receiving fake news from another person online or face-to-face, consider their professional reputation and experience. Reflect if they are a truthful person and whether they have received back-hand information from another person. 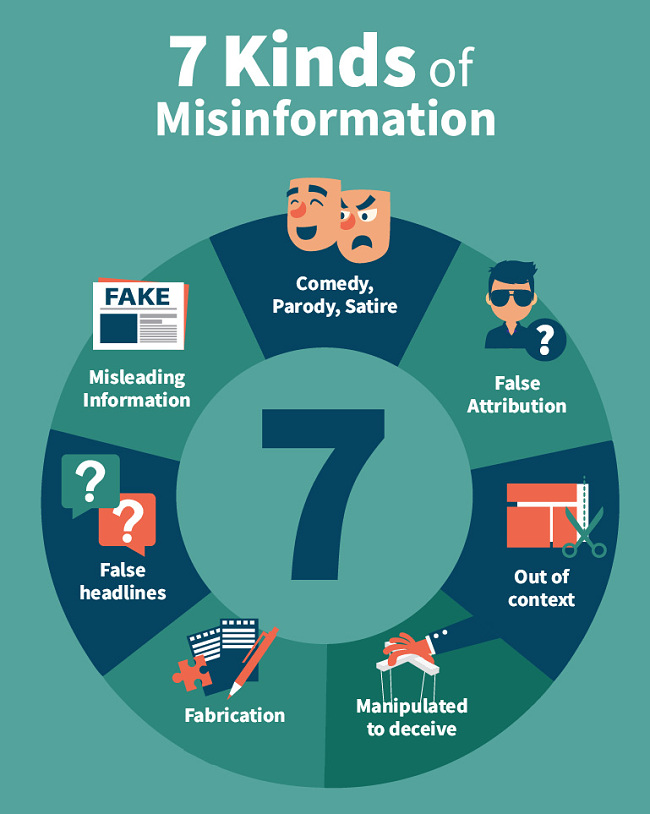 Identifying significant credible sources is crucial. If the story has been picked up by well-known and reliable publishers, it may not be fake news. Organizations such as CNN and the BCC are trustworthy sources that you shouldn’t encounter fake news with. Fake news is more likely to be sourced from lesser known sources that may play on the truth for malicious reasons.

Make sure you keep an eye out for fake official websites; people who spread fake news often go to the effort of creating web-page mockups that give you alternative facts. The URL is again, a tremendous teller. 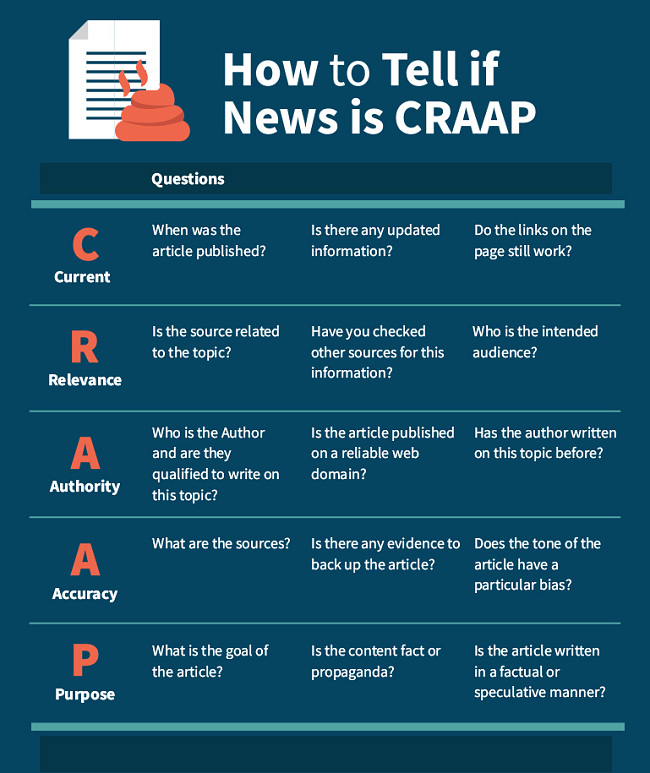 9Fake Images Can Also Be Used to Allude You

Not only can articles allude you from the truth, but counterfeit images can also take on the same role. While we have moved mountains in the technological world to make content more accessible, modern editing software has made it easy for fake images to be created. Often these images look professional and real, and recent research has revealed that only half of the people viewing them can identify whether they are fake or not.

The major red flags to look out for in images are strange shadows on the image or uneven modifications to the features within the image. 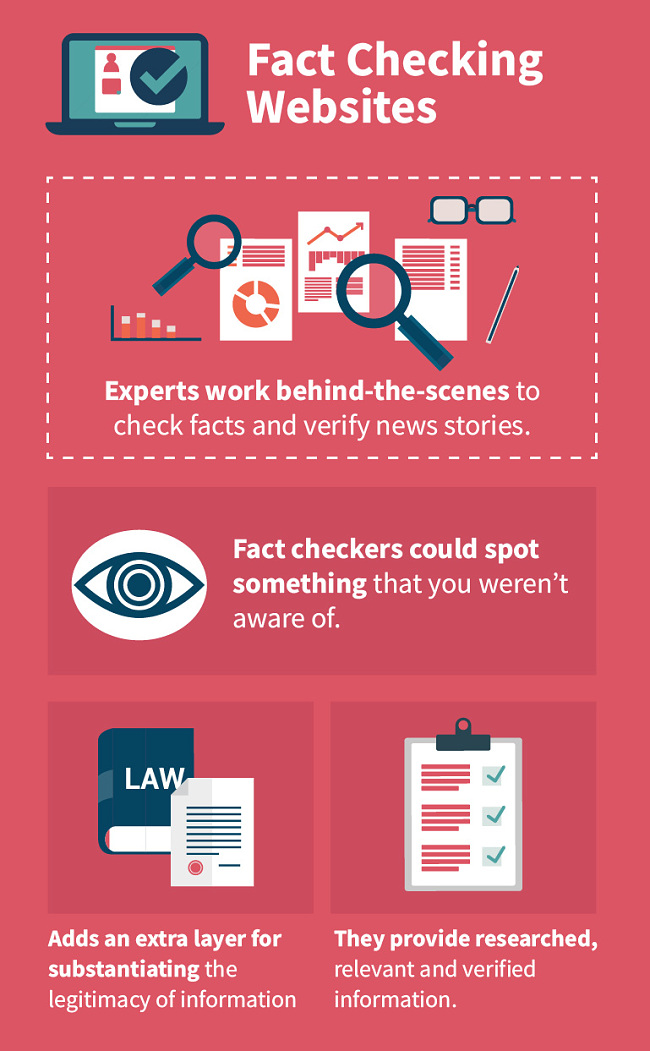 10How To Examine The Facts

Fake news is often empty, containing little supporting evidence throughout the article. A credible story will always offer plenty of evidence, with quotes for field experts, official statistics, or survey data. This is usually a massive giveaway of whether the facts of the case are true or false.

Using your common sense will help weed out the credible stories from the fake news. If a story sounds drastically unbelievable, it’s likely that it’s false. 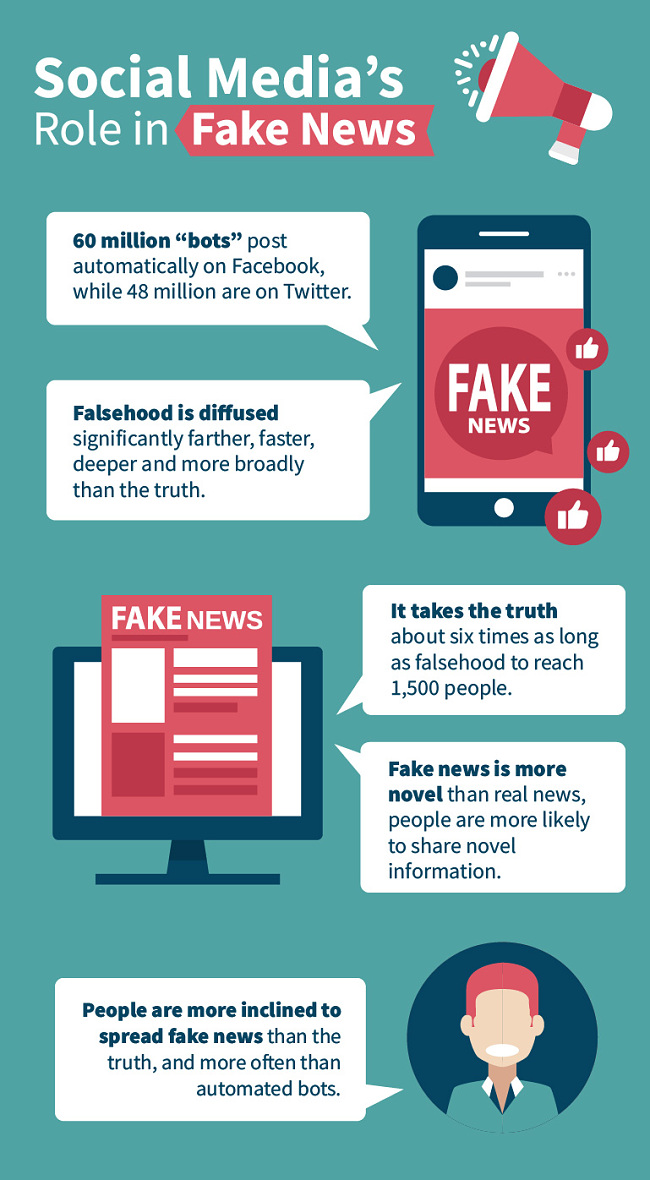 11What Kind Of Fake News Is Likely To Fool You? 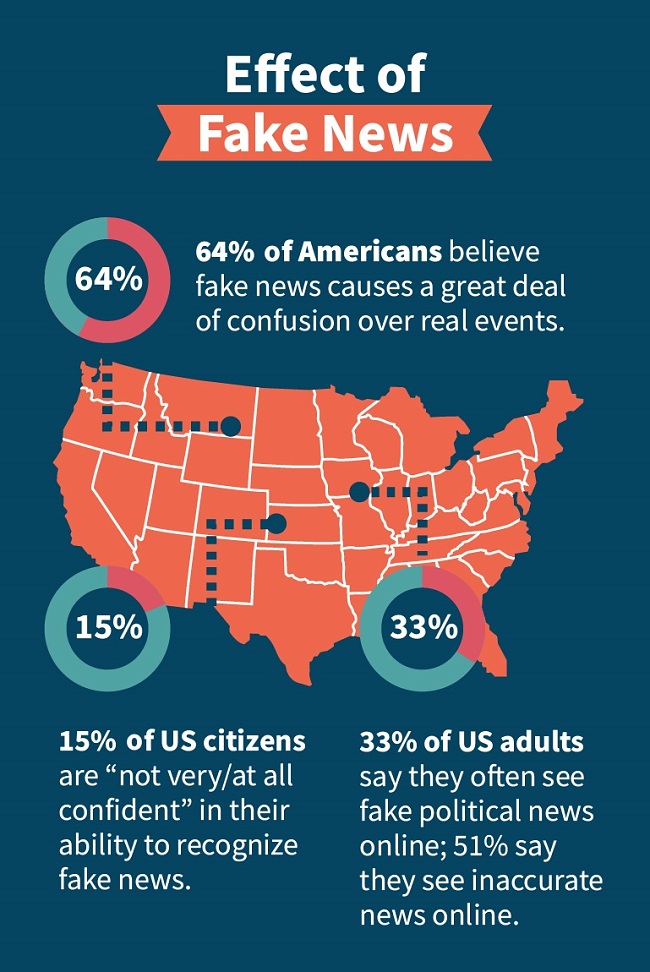 12The Effect Of Fake News

Once it’s out there, fake news can cause massive mistrust and confusion. This has led to a large number of people not believing anything they see within the media, whether real or false. This has made it increasingly difficult to deliver messages to audiences effectively. The former gold-standard outlets are no longer universally trusted or respected, making it frustrating to provide information at all.

The flood of fake news spiked with the 2016 presidential election. One study found that more than 25% of US citizens visited phony news websites within the six weeks leading up to the election. 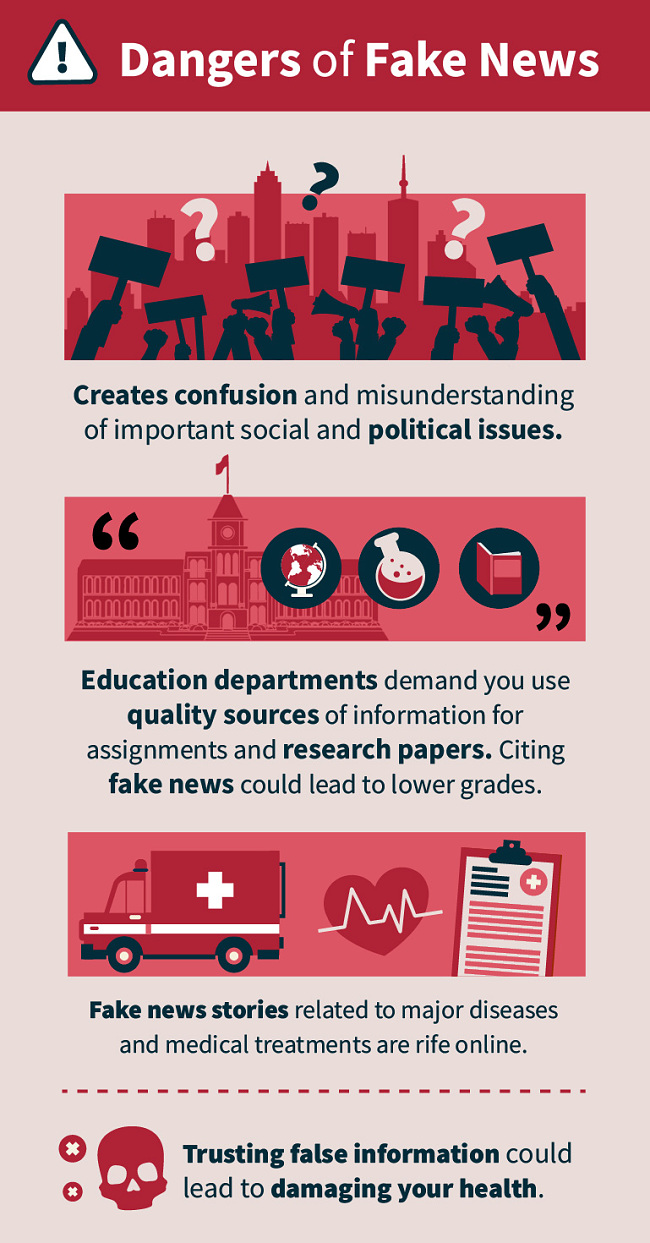 13Is Social Media To Blame?

Anyone with an internet connection can be considered a journalist now. With so many platforms like Facebook, Twitter, and personal blogs, it’s easy to create and share legitimate looking news that has no founding in reality. It also has a higher chance of being believed or shared since the networks are segmented so that it’s being shared with people that already have a bias and want to believe the true story. 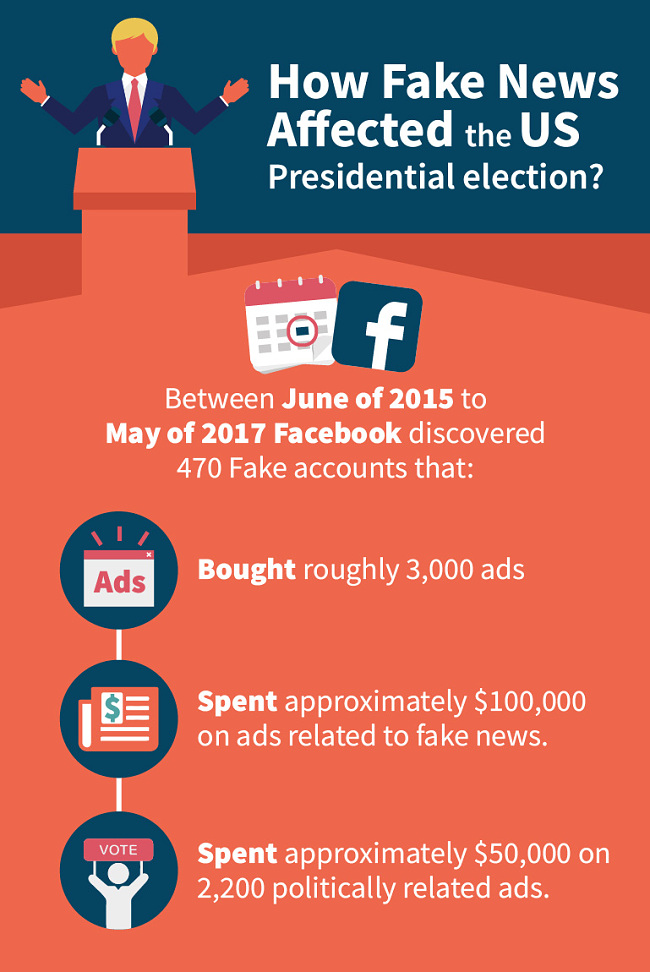