Are you wondering if you can combine learning Spanish with a leisure activity — perhaps Netflix? The answer is yes! Netflix is a fantastic resource to learn Spanish with hours of foreign language shows and helpful subtitles within a few clicks. You’ll have a good reason for saying, “Ok, one more episode.”

I’ve created a list of my top 12 Spanish-language shows on Netflix. I’ve also provided suggestions for how to effectively learn Spanish from watching TV shows.

The Spanish comprehension levels range from beginner to intermediate. I’ve even added children’s shows, so they’ll be easy to understand and fun to watch! The shows include different Spanish regional dialects and accents, which reflect the diversity of Spanish-speaking regions around the world.

Money Heist is one of the best foreign-language series I’ve seen. It’s about a group of criminals who have an ambitious plan — to print billions of euros from the Royal Mint of Spain.

El Profesor is the mastermind behind the 8 robbers with disguises and code names. You’ll be amazed by the multitalented crew’s skills to hack and defraud in executing the operation.

You might notice that the title has a strange translation from Spanish. La Casa de Papel translates to “The Paper House”. However, the series is so good that the title won’t even matter.

The level of Spanish is what you’d hear today in a regular conversation with friends — filled with colloquial Spanish expressions and jokes. Most of the characters speak clearly, so you’ll have no problem understanding them.

The Ministry of Time is a top secret department of the Spanish government in charge of time travel. The officers move through time to prevent criminals from interfering with significant historical events.

The show includes important historical Spanish figures and landmarks, such as King Phillip II and the prehistoric wall art in the Cave of Altamira. This sci-fi and fantasy series is an exciting way to learn about Spanish history while developing your language skills!

Narcos is a true story about the Colombian drug lord Pablo Escobar and his Medellín Cartel. The show is a thrilling ride as Escobar builds his drug empire while federal agents try to capture him.

Though Narcos is the highest-rated series on this list, it isn’t the best choice if you want to only watch TV in Spanish. While the majority of the show is in Spanish, the scenes of the US government agent hunting Escobar are in English. Narcos is a good choice for gradual Spanish immersion since roughly 30-40% is in English.

Although the show is based in Colombia, Narcos has received criticism for its foreign actors with thick non-Colombian accents. For example, the actor for Pablo Escobar is Brazilian and other prominent actors are from other Latin American countries. However, you can improve your listening comprehension skills by listening for the differences in Spanish accents.

El Chapo is a thrilling reenactment about the rise and fall of Mexican drug lord Joaquin “El Chapo” Guzman. After working his way up through the Mexican cartels, El Chapo became one of the most powerful drug lords in the world. This series also reveals the corruption in Mexican politics.

This is a good option for learning Mexican Spanish with minimal English dialogue. The show provides useful descriptions in Spanish introducing the key characters involved with the drug trade.

The House of Flowers is a comedic telenovela about a wealthy and dysfunctional Mexican family. The matriarch Virginia tries to maintain the family’s perfect image as the drama unfolds. Each family member’s secret is exposed, including infidelity, secret families, and hidden businesses.

The show discusses social inequality issues in contemporary Mexico, including homophobia, sexuality, class divisions, and morality. This is a great series to learn modern and useful Spanish vocabulary!

Club de Cuervos is about a brother and sister who battle for their father’s inheritance — most importantly, his soccer club. While it sounds dark, it’s actually a hilarious comedy. This show is a satire about the gender politics and class divisions in Mexico. You won’t need to know anything about soccer to enjoy this show.

This is Netflix’s first exclusive Spanish-language series. The writer, who doesn’t speak Spanish, wrote the original script in English. It’ll be easy for an intermediate level learner to understand the Spanish dialogue and learn slang local to Mexico.

Grand Hotel is filled with drama, scandal, love, and mystery during the early 1900s in Spain. This is the perfect series for fans of Downton Abbey who want to learn Spanish.

The story is about Julio Olmedo’s search for his missing sister at the Grand Hotel. He learns that she ran away from the hotel, but he knows this is a cover up. As he investigates her disappearance, he also falls in love with people who he shouldn’t fall in love with.

Since this is a period drama, the formal Spanish is not commonly used today. However, it’s a great series to learn useful vocabulary with minimal slang and clear pronunciation.

Ingobernable is a fictional political drama about the First Lady of Mexico, who’s falsely accused of murdering her husband. As she tries to uncover the truth, she faces threats and obstacles from the dangerous opposition.

This is an intense action series for a higher level of Spanish. You’ll encounter slang specific to Mexico City.

Locked Up (Vis a Vis)

Locked Up is a thrilling combination of Orange Is the New Black, Money Heist, and Breaking Bad. Macarena Ferreiro is framed for financial fraud and becomes an inmate in a Spanish high-security prison.

The show is filled with romance, violence, and drama inside and outside of the prison walls. Locked Up challenges sensitive contemporary topics, such as homophobia and racism.

You’ll hear a lot of slang and informal language, which can be difficult to understand. But if you keep watching, your listening comprehension will quickly improve!

Cable Girls focuses on four women who work for Spain’s first national telephone company in Madrid in the 1920s. This show provides insight into a historical moment for women’s rights. It explores the challenges that women faced in their professional and romantic lives during a conservative time.

The characters occasionally use words and phrases that were spoken a century ago. However, you shouldn’t have any issues understanding with subtitles.

Trollhunters is the easiest show to understand on this list. This is a Dreamworks film developed by famous Mexican director Guillermo del Toro, who also directed Pan’s Labyrinth and The Shape of Water.

James, a teenager, discovers a magical amulet and a secret world of trolls and magical beings. When he’s not studying for school, James has to save the world from evil. The plot is simple and easy for all Spanish levels to follow. It’ll introduce you to many basic and modern phrases in Spanish.

Ask the Storybots is an animated educational kids TV show. After the children ask questions, the Storybots search everywhere for the answers. Songs accompany the scenes throughout the series, which help you to remember words and phrases!

This show is perfect for beginning Spanish learners. You’ll be introduced to many basic Spanish vocabulary words while having fun! 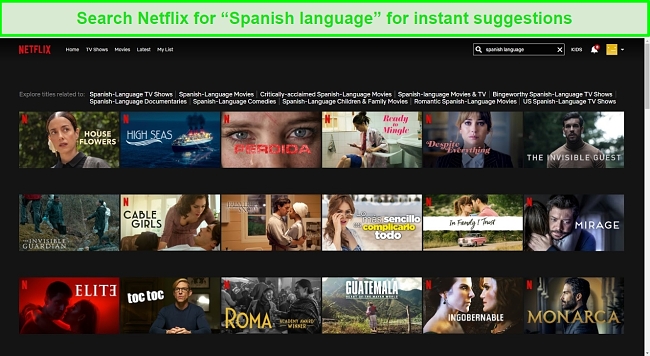 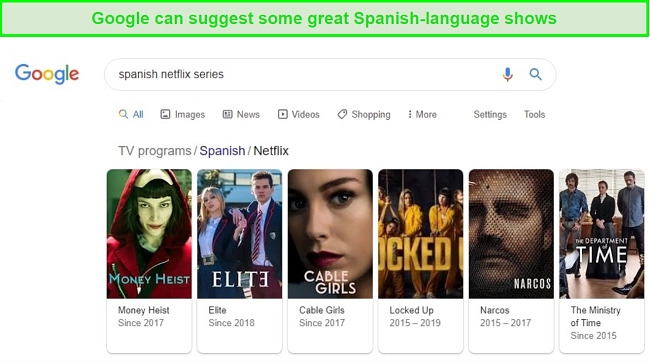 Google gives you suggestions for Spanish TV shows on Netflix

Start Gradually and Build Up

Whether you’ve never learned Spanish before or you’ve taken a few lessons, you can learn most effectively by following the below steps:

Familiarize Yourself With the Subject Matter

Before starting a new series, it’s a good idea to read the summary. You can read the synopsis of the show in English to familiarize yourself with what the show will be about (beware of spoilers). For example, you may want to learn vocabulary connected with time travel, history, and secret agents before watching The Ministry of Time. While learning all of the phrases isn’t necessary, it’ll give you a basic understanding of the plot.

Use the “Language Learning with Netflix” Chrome Extension

The Language Learning with Netflix Chrome extension was created to make the process of watching and understanding easier with more subtitle options.

The extension displays subtitles in Spanish and another language for the show. You can click on the subtitles displayed on the right to jump to a different time in the episode. If the dialogue is too fast, you can turn on “auto-pause” to stop the stream after every line is spoken and replay the scene if necessary. 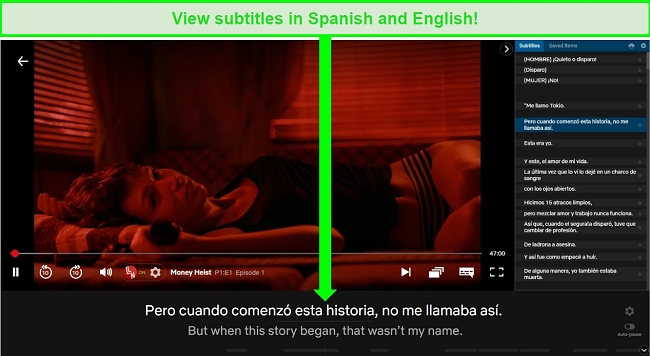 This Chrome extension displays subtitles in Spanish and English

Use Spanish Subtitles With English Audio

While understanding an entire Spanish series is a fantastic goal to aim for, you might prefer watching an English-language series and using Spanish subtitles. You’ll understand the audio and can add to your Spanish vocabulary. If you’ve had a long day, this might be easier to learn than an intensive Spanish lesson!

Grab a Notepad and Use the Pause Button

If you want to remember new Spanish vocabulary, you can hit pause and repeat the words out loud. If you write what you read or hear, you might remember the words better. You can build up a library of words and phrases that you can practice when you’re not watching Netflix.

Due to regional restrictions, some of the Spanish-language shows I’ve listed may not be available to you. To gain access, you can easily sign up for a VPN, connect to a region where the series is available, and start streaming!

Watch Great TV and Learn Spanish at the Same Time!

Netflix is the perfect Spanish teacher — now you can get cozy on your couch and be a good student. An interesting Spanish series will elevate or reinforce your Spanish vocabulary, get you more comfortable following native-level conversations, and also provide a window into local Spanish-speaking cultures.

Netflix is perfect for Spanish immersion. Binging a show in Spanish exposes you to hours of native-level Spanish. Combined with subtitles, this is a great resource to learn new vocabulary and improve your listening comprehension!

Besides the benefits of improving your Spanish abilities, Netflix has a major advantage over your textbook — it’s fun! With impactful scenes and memorable moments, it’ll be easier to remember new words with the stories behind them.

Now choose an interesting show in Spanish and get learning. Empezar!