Perhaps the most challenging solitaire game around, Spider Solitaire is a two-deck solitaire game that has frustrated players for years. The goal of the game is to build eight stacks of suited cards from A – K. It comes in three levels, with each one getting progressively more challenging. It’s a great game to kill some time while in between classes, meetings, or when you just have some spare time.

How to Uninstall Spider Solitaire

The object of Spider Solitaire is simple, arrange all the cards in order and in the same suit, from King through Ace. After you complete a set of cards, it will be removed from the gameboard. To win, you’ll have to remove all the cards. Sounds simple, right? In reality, it’s a challenging card game that will have you thinking two or three moves ahead.

There are three Spider Solitaire games; the rules are the same for all three; the only difference is the level of difficulty.

Spider Solitaire is a two-deck solitaire game, which means that you’ll have to deal with two of each suit and a total of 104 cards. The playing board is divided into three sections:

How to Play Spider Solitaire

If you have stacks with multiple suits, only the bottom cards can be moved. Looking at the image below, the 6, 7, and 8 of diamonds could theoretically be moved together, since they are all a matching suit. Unfortunately, there is no 9 showing on the board, so the cards above it are all stuck, and the J of spades can’t be moved to the Q of spades. There are still a few moves left to be made here, that can open uncover more cards and perhaps help organize the stacks.

If you have an empty tableau, any card or run of suited cards can be moved on it. There is a helpful “Hint” button that can suggest a move if you’re stuck. You can also undo any move if you’re not happy with it. When you’re all out of moves, click on the Stock and one new card will be dealt onto each tableau.

Once you have built a complete set of suited cards, it will automatically be moved to the Foundation. While it will feel good to move the first set, to win the game, you’ll need to complete all eight sets of cards to fill in the Foundation section.

Track your Score and Stats

If you like to challenge yourself, Spider Solitaire keeps all sorts of game statistics. It tracks how many games you’ve played, wins and losses, winning streaks, and how many moves it took for a win. You can collect trophies when you reach a certain number of wins for each level as well. There is also a timer that runs while you’re playing so you can race your friends and see who can win in the shortest amount of time.

Spider Solitaire gives you the control turn on and off the scoring, timing, and showing the number of moves. It also gives you control over the look of the gameboard. Choose the theme, card set, card back, and background of your choice. 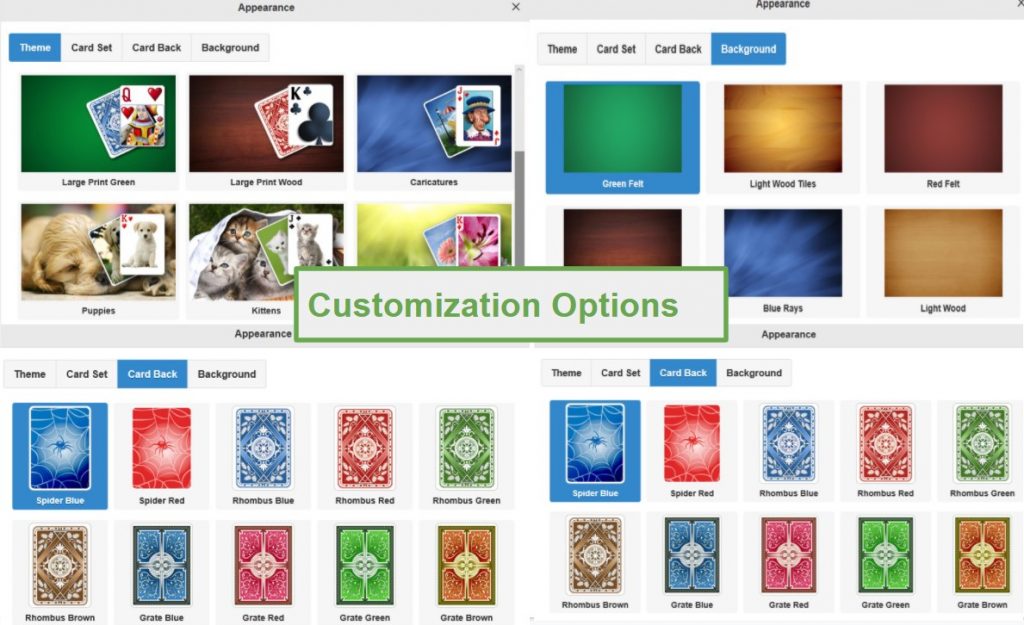 If you’re looking for more brain games, try out these fun alternatives.

While I can’t speak for all versions of Spider Solitaire, I personally tested this file for viruses and malware, and it was completely clean. It’s always recommended that you download the official version, that way you won’t have to worry about someone adding bloatware, spyware, or viruses in the installer.

😐Why can’t I play Spider Solitaire at work or school?

Some employers or schools block games with a firewall. Thankfully, with the right software, you can easily bypass the firewall and play whatever games you want. The best software to bypass a firewall is a VPN. If you’re not sure what a VPN is, I recommended you read our Beginner’s Guide to VPNs, otherwise check out the best VPNs for bypassing firewalls here.

Write a Review on Spider Solitaire