“3%” is an exciting Netflix series that is the first-ever produced exclusively for the Brazilian audience. It’s just the second non-English language series every produced by Netflix, and tells the tale of a grim, dystopian future where young people living somewhere called “the Inland” have one chance to try and complete “The Process” for the opportunity to make it to “The Offshore”, a much better environment all agree. 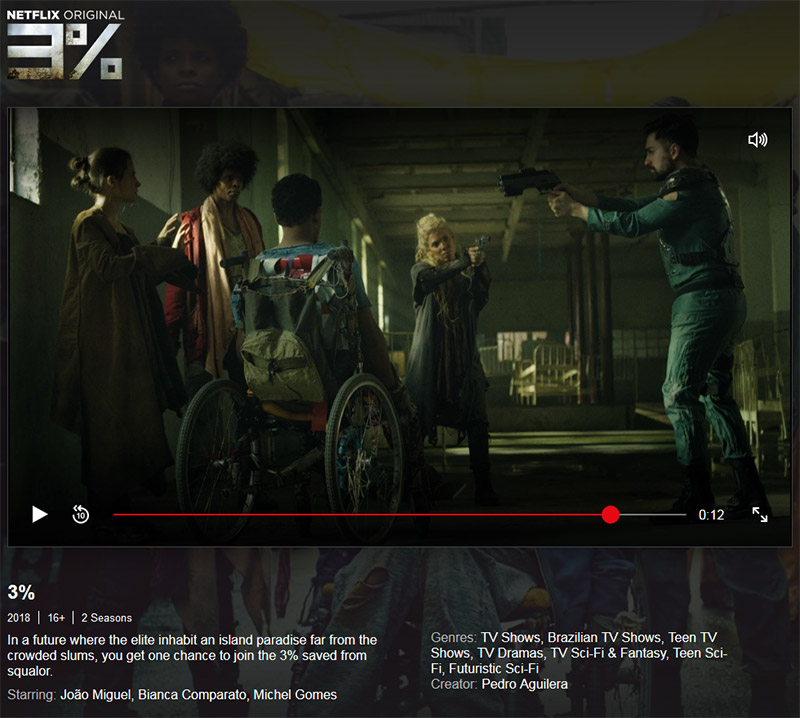 The first season had eight episodes and the second had 10. A third season has been announced debuting sometime in 2019. The series holds  very strong 7.5/10 ranking on Internet Movie Database (IMDB).

While it’s exciting to see Brazil having such an exciting program gracings its airways, the excitement wanes when considering that if you are a Brazilian citizen located outside your home country.

Netflix is very particular about letting users outside a certain region view content they aren’t admitted to view. This process is called geoblocking, but there is a way around it. The solution comes in the use of a virtual private network (VPN).

A VPN is mainly used to provide secure connections and enhance privacy. For the case of this blog, the VPN is being used to provide a workaround to Netflix geoblocking which is a formidable opponent. A VPN will connect the user’s Internet-capable device to a third party, assuming one in Brazil, and form a secure tunnel between the two.

The tunnel is heavily encrypted to keep third parties  from being able to see what websites and files you are accessing online. When you send request to websites in Brazil, such as Netflix, the request will land in the remote server where the remote will decrypt your information and attach a Brazilian IP address to it.

Thus when the request reaches Netflix, it will check the IP address on the data request. When it sees the Brazilian IP address it will proceed to allow you to begin downloading and streaming your favorite programs such as”3%”.

The data packets will flow back to remote computer first, where it will encrypt them and send them through the secure connection to your computers. Once there, they will be decrypted and you can begin watching 3% anywhere in the world, be it Libya, Lebanon, Luxembourg, or Las Vegas.

Step-by-Step Instructions to Watch 3% with a VPN

What are the best VPNs for unblock Brazilian Netflix?

NordVPN continues to set the gold standard with its 4,400 servers spread across 60 countries. Security is never a problem for NordVPN, it has 256-bit encryption, DoubleVPN tunnelling, an instant kill switch, unlimited switching, and more.

Moreover, NordVPN has a proven track record of working around the US version of Netflix, meaning it should be able to do the same for the Brazilian version.

Sweden’s PrivateVPN has security through the rough with 2,048-bit encryption, an automatic kill switch, built-in leak protection, and a very strict no-logs policy in place.

It allows you to connect up to six devices per license and has a 30-day money-back guarantee. It doesn’t have the best number of servers, however, so makes ure Brazil is well represented before activating the purchase.

Speed is the name of the game for ExpressVPN , based out of the British Virgin Islands. It also does nicely with very impressive 24/7 customer service featuring Live Chat and a 30-day risk-free guarantee.

It gets criticized at times for a high price tag, but all these features, plus unlimited bandwidth and server switches help foot the bill.