Windscribe claims that they have specific servers that work with Netflix, and we decided to put the claim to the test.

Windscribe has made compatibility with Netflix a focal point of their service, and there are servers explicitly optimized to work in conjunction with the service. 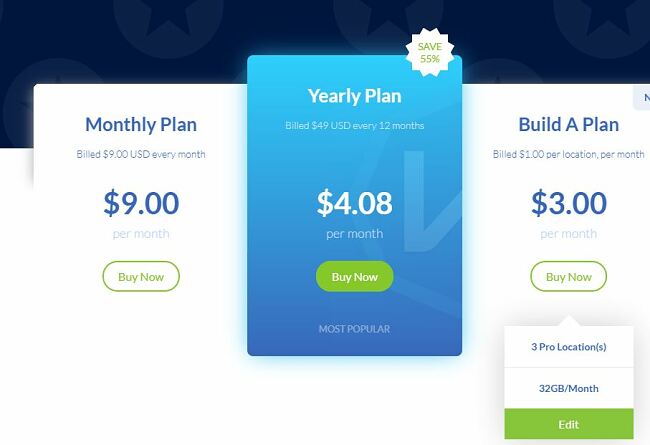 Uniquely, there is a great price structure that allows you to build your own plan and pay just $1.00 per server a month, which includes the streaming servers.

We chose the two Netflix specific servers, one in the US and one in Canada, and went to our Netflix account to test them out.

Do The Windflix Servers Really Work to Unblock Netflix

Keep in mind that the WINDFLIX servers are only available for Windscribe Pro and Custom Plan users with WINDFLIX locations.

We started with the Windflix US server, since that is the most popular option, and the library was populated with all new shows that we don’t usually have.

We clicked on the Avenger’s Infinity War and were able to enjoy the entire movie without any interruptions, low-quality streams, or buffering.

The US Windflix server worked as advertised, giving us access to US Netflix

After taking a short break, we connected to the Canadian Windflix server and sat down for another movie (I have the best job in the world). Windscribe delivered as promised, and we were able to enjoy 21 Jump Street with another high-quality stream.

Lastly, we tried the Windflix UK server and once again sat down to stream Netflix, this time with access to the UK Netflix library.

For just $3.00 a month we were able to unblock three of the largest Netflix libraries.

We didn’t have high hopes going into this test, because if the free version worked, why would Windscribe need the Windflix servers? Nevertheless, we were determined to check, so we connected with several of the free servers and went to Netflix.

Although we were able to access the Netflix site, we kept getting the Netflix Proxy Error message when we tried to watch a movie or show: 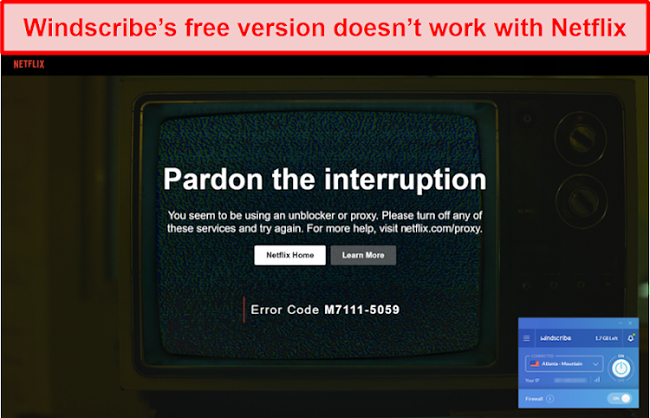 Windscribe was blocked by Netflix

The error message signifies that Netflix has identified that you are using a VPN and have restricted access. As a result, the only way to access Netflix using Windscribe is to subscribe to the paid version.

Every day countless devices and accounts access Netflix using a VPN or proxy. To tackle this, Netflix finds trends in the IP addresses being used. If multiple devices are accessing the site from the same IP address, then it is likely that IP is from a VPN server.

When Netflix determines that the IP address is that of a VPN or proxy server, then they will block its access to the site, preventing those using a VPN from bypassing geo-restrictions.

The premium VPNs, or servers like Windflix, are continually changing their IP addresses to avoid detection.

Free VPNs will typically not invest in multiple IP addresses since they are giving you the service for free, there is little incentive to provide a premium service.

The premium service offers Windflix, a Windscribe feature that unblocks Netflix and other streaming sites.

Windflix’s server count is limited to the US, Canada, UK, and Japan, so you can only watch content from those locations. Our test was just for the US and Canada, but in chatting with other Windscribe users online, we received reliable reports that the UK and Japan servers are working.

You can read our complete Windscribe review or see the highlights below.

During tests, we didn’t experience any connection issues and were able to connect to each server the first time, every time.

Furthermore, the performance was relatively impressive with UK and US servers showing the fastest speeds, perfect for streaming Netflix. Other servers were slightly slower, but not enough to warrant connection issues.

Connected to servers in the US and UK, we didn’t encounter any buffering or interruptions when watching TV shows or movies on Netflix. Additionally, we had no issues with the video quality dropping while streaming.

Once we were satisfied with how the Windflix servers worked for Netflix, we put them to the test with a few other streaming sites as well. While connected to the Windflix UK we were able to connect to BBC iPlayer and watch a few episodes of Doctor Who without any trouble.

The Windflix UK server works with the BBC iPlayer

Next, we switched back to Windflix US and connected with our Xfinity cable account and watched some NBA basketball.

Overall, we are pleased with how Windscribe, and in particular, the Windflix servers, performed during our streaming tests.

For a month-to-month subscription of Windscribe, you’re looking at $9 per month, which is cheaper than some VPNs on the market, but still rather pricey since they don’t have global servers available for Netflix.

You can use this valid Windscribe Coupon to save on a yearly plan.

Your final option is the Build a Plan subscription. With this you will be billed $1 per location per month, meaning your bill can vary depending on your use. This is an excellent choice for those who repeatedly connect to the same locations as it will keep prices down. If you just want a VPN for US Netflix, the dollar a month subscription will be hard to beat.

If you aren’t happy with Windscribe for any reason, you can close your account and get your money back, provided it’s within the three business days.

Despite Windscribe having the ability to unblock Netflix, you can only do so in the four countries with Windflix servers. However, there are many other VPNs available that can unblock Netflix across the globe and still work at high speeds.

With dedicated servers around the world, ExpressVPN will provide you with the opportunity to unblock Netflix no matter where you are.

Over long and short distances, ExpressVPN’s performance has shown to be one of the fastest out there. They also have a zero throttling policy so you can stream without interruptions, buffering, or loss of quality.

ExpressVPN’s prices are a little higher than Windscribe, but you gain access to many more features.

2. CyberGhost – Fast, reliable, and easy to use

CyberGhost offers an extra speed feature that can optimize your streaming experience.

With servers worldwide, you can always find a way to stream your favorite content across a range of sites, including Netflix.

CyberGhost is around the same price as Windscribe, and you have a lot more features to utilize, especially the ability to watch Netflix from anywhere in the world.

Summary: Other Top VPNs That Work Perfectly With Netflix in 2021)