These 3 tricks will have you watching Viu anywhere

If you hail from Indonesia, Malaysia, India, the Middle East or Myanmar, there’s no doubt you’ve heard of Viu.

This over-the-top video service has 20 million monthly active users as it shows Asian dramas, variety programs, anime and entertainment news. It has piled up those 20 million users in less than four years.

Naturally, this makes virtual private networks (VPNs) quite popular for citizens of other nations who want in on the Viu craze. It’s not hard to do, either, despite the tough in-place Internet censorship some of the nations broadcast.

Thailand ranks first in the world in VPN common usage, with 24% of its population using them regularly. Indonesia is second at 22%, with India tied fifth at 18%, and Malaysia ninth at 17%.

It’s not a surprise that many of these countries rank low on the freedom scale among first-world countries. Of the 65 most restrictive countries in the world, Saudi Arabia ranks 58th, Thailand 53rd, Turkey 46th, Malaysia 37th, and Indonesia 33rd. 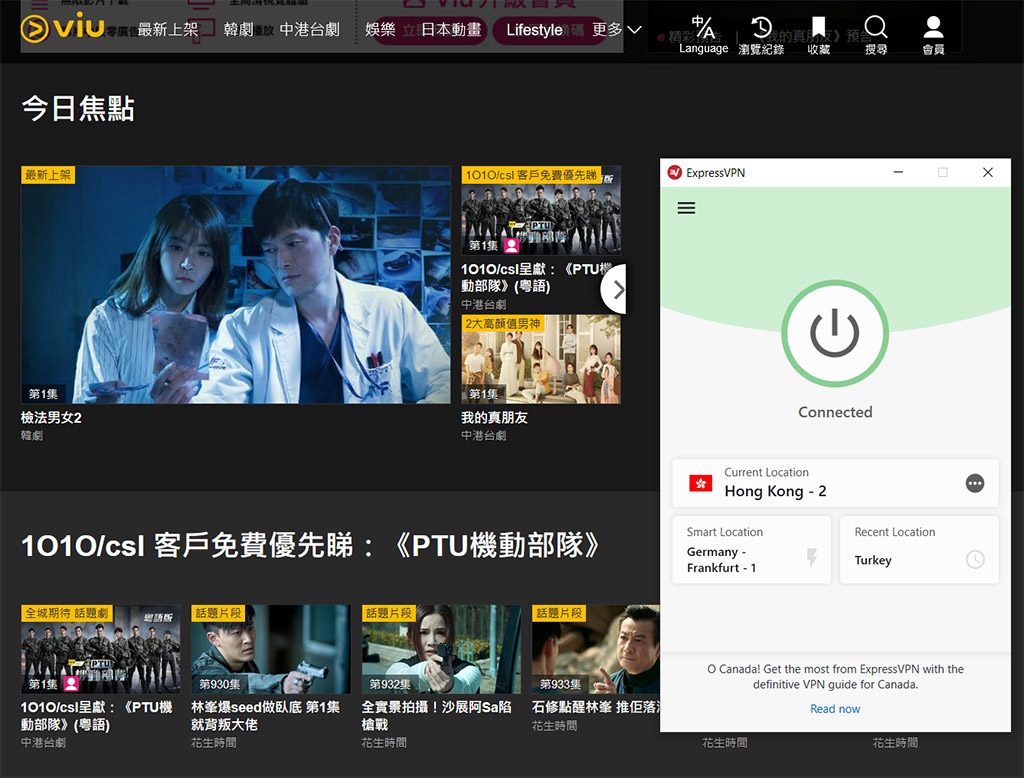 If you’re going to use a VPN in a country where Internet freedom is significantly restricted, you want to make sure that said VPN is stocked with security features to keep you safe.

While plenty of VPNs pride themselves on their ability to access geo-blocked websites, the really special ones are those that keep your Internet sessions 100% safe not only while they are going on, but in the future in terms of what they do with the data you send and receive while using the VPN.

The No. 1 thing that a VPN can offer that should tell you that it is worth its salt is AES-256 encryption. This is the same security for encryption that the US military and government use and is generally thought to be impossible to break through.

The idea being that the most advanced supercomputer in the world would take billions and billions of years to solve the encryption.

Second that that list is that a VPN company not keep any logs of where a user goes and what information they upload/download while using the VPN.

Some VPN countries, like those in the UK, are compelled to keep logs and metadata for a certain number of weeks, months, or years, which could spell trouble for browsers using VPNs to access content that is illegal in their own countries.

Third on the must-have list is a kill switch. This handy piece of code stands ready to kill your connection to the Internet should your VPN connection ever fail. In such an instance without a kill switch, your own IP address would be exposed as being connection to material that might be illegal for you to be viewing.

Any third party like a government agency or your own ISP, particularly one in a heavily-sanctioned country, would be able to capture your personal information and potentially use it against you.

Incorporated in the Seychelles, Trust.Zone VPN is a great no-frills VPN choice for beginners looking to get going on their first VPN experience.

It has the kill switch and the zero-logs policy as parts of its standard package and has a really clean interface that novice users will appreciate. It also has a three-day free trial and a 10-day money-back guarantee.

PrivateVPN has a strict no-logs policy, an automatic kill switch, and built-in leak protection along with 2048-bit encryption that makes it a top-choice when you’re talking VPN security.

It’s a generous choice as well, as it caters to users who like to torrent files with its port forwarding and P2P functionality. It also supports up to six connections at one time, the second-highest in the industry among the big players.

ExpressVPN packs a triple punch of speed, security, and customer service to rank among the favorite VPNs in the industry.

With ultra-fast servers all over the world, it routinely ranks near the top of the speed charts in the industry. Its security includes a kill switch, zero-knowledge DNS to keep you log-free, and AES-256 encryption.

All these factors add up to ExpressVPN being one of the best when it comes to accessing some of the world’s most popular geo-restricted services.