Missing RCTI shows outside of Indonesia? Catch up for free with this hack

For all the freedom the Internet provides individuals, companies are starting to catch up and limit their intellectual property from being distributed free of charge. This is particularly true for television networks seeking to limit the areas where their programs can be viewed for free.

What’s the logic behind this? Well, TV networks sell the rights of their best shows to networks in other countries to be rebroadcast, and usually subtitled, for a fee. The original network makes a profit, the secondary network gets to air popular shows for its audiences and charge advertising companies to buy space.

However, if TV viewers in those other countries can watch the imported shows via the Internet, they won’t watch them on TV, which means the secondary network won’t find advertisers and will have wasted its money. If they can’t make money on a program, they won’t buy it from the original network.

Thus, countries like Indonesia put geo-restrictive software in place so that viewers outside the island nation can’t watch networks like RCTI unless they have an Indonesia IP address.

The best solution for this problem is to connect to the Internet via a virtual private network (VPN). 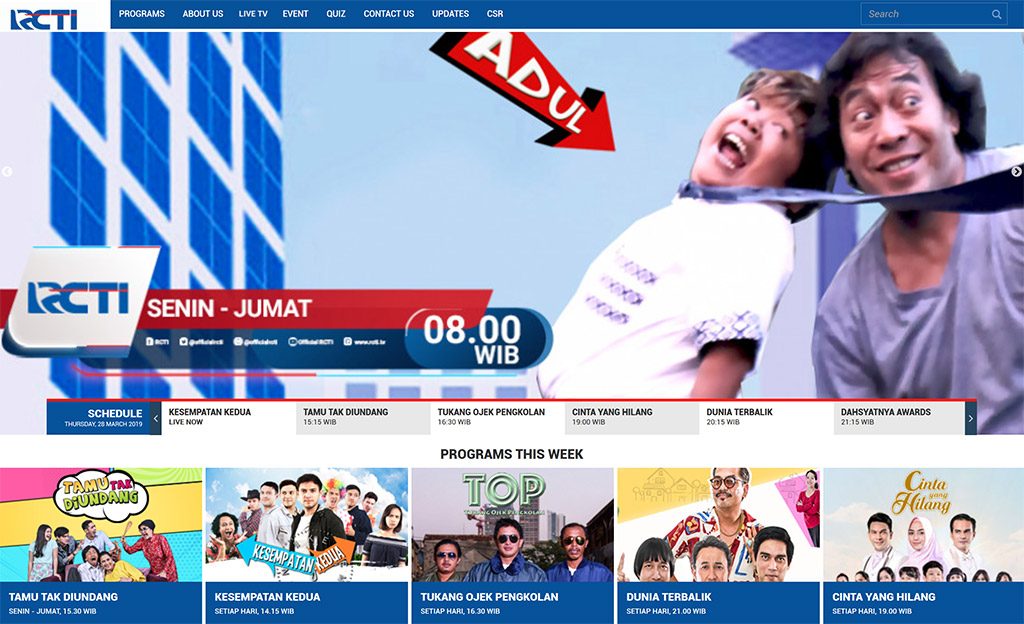 It can be viewed for free on a limited basis in East Timor, Malaysia, and Singapore.

Tips for selecting the best VPN

When it comes to shopping for anything, price is obviously a concern for most consumers.

If you’re living, working, or travelling outside Indonesia but anxious to watch your favorite RCTI shows, you will also need to find a VPN that offers great speed and security.

Why speed? Because streaming content takes up a lot of memory and processing power. The faster the VPN connection, the more seamlessly your video will stream. There’s nothing worse for watching TV programming online than to be taken out of the show or miss a pivotal point of the game or match because of TV freezes and glitches.

More importantly, security on a VPN keeps your connection safe from third parties, including cyber criminals and hackers, particularly if you are using public WiFi such as what one might find in an airport, library, or on a college campus.

Best VPNs for watching RCTI outside of Indonesia

HMA VPN is based in the UK which isn’t the greatest country for data privacy. That means it has to keep logs of user activity, but has stated on record many times that it will not disclose customer information to any government agency.

It was recently purchased by security powerhouse Avast, which suggests that it can make good on this promise. HMA is a global VPN with a lot of exotic locations for its 900 servers which are spread across more than 320 locations in 190 countries. It supports OpenVPN and IPSec encryption and has a 30-day money-back guarantee.

Like the previous entry, Private Internet Access (PIA) VPN does not hail from the most favorable country for VPN users, calling the United States home.

Despite that, it has proven time and again that it considers user privacy to be paramount, thanks to a kill switch, DNS leak protection, SOCKS5 compatibility, and lots of encryption options. It has more than 3,000 servers worldwide and allows you to connect to the VPN on up to five device per license.

VyprVPN is a security powerhouse among VPNs, based in Switzerland, which has some of the best privacy laws in the world. VyprVPN has its own NAT Firewall as a part of that security, as well as 256-bit AES encryption and a strict no-logs policy.

It is also an ideal set up for streaming lots of video by offering unlimited bandwidth as a standard feature. VyprVPN has one of the biggest repositories of available servers with more than 200,000 IP addresses housed by more than 700 servers.