How to Watch UFC Fight Night 11/14 From Anywhere 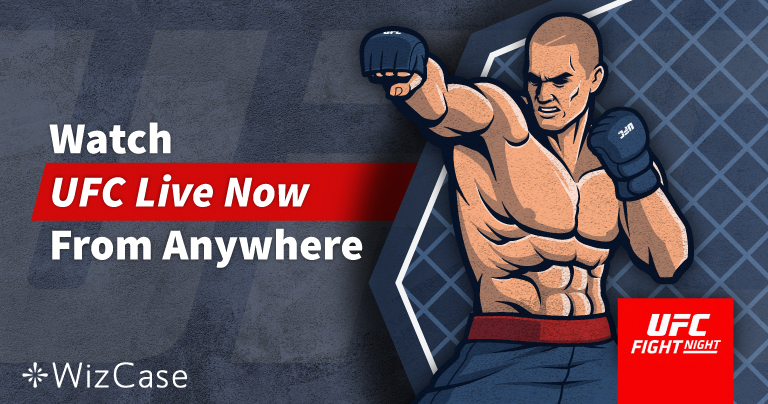 As a diehard UFC fan, I find it really frustrating when I see this error message — especially when I’ve paid for a streaming subscription but can’t use it because I’m not in the right location:

This event is currently blacked out in your region.

UFC Fight Night is geoblocked so if you’re not in the US (or a select few other countries) you won’t be able to watch it. Luckily, a VPN can help you get around the block by giving you a new online location.

I tested dozens of top VPNs to find the 3 best providers for watching UFC fights. My test results show that ExpressVPN is the best choice due to its lightning fast speeds and smooth streaming. It takes less than 5 minutes to get set up, so you don’t need any technical knowledge to start streaming UFC content right away. Best of all, you can try ExpressVPN for 30 days risk-free with its money-back guarantee!

1. ExpressVPN — #1 VPN With Fast Speeds for Streaming the UFC With Zero Interruptions

ExpressVPN is the best choice for streaming the UFC because of its super-fast streaming speeds. As someone who’s watched a lot of live sports, it’s important to me that my connection speeds are fast enough to stream without any interruptions. I was impressed by the results of my speed tests with ExpressVPN as its servers are consistently fast worldwide. Every one of the 10 servers I tested had speeds of over 30Mbps, which is fast enough to livestream UFC fights without lag or buffering. 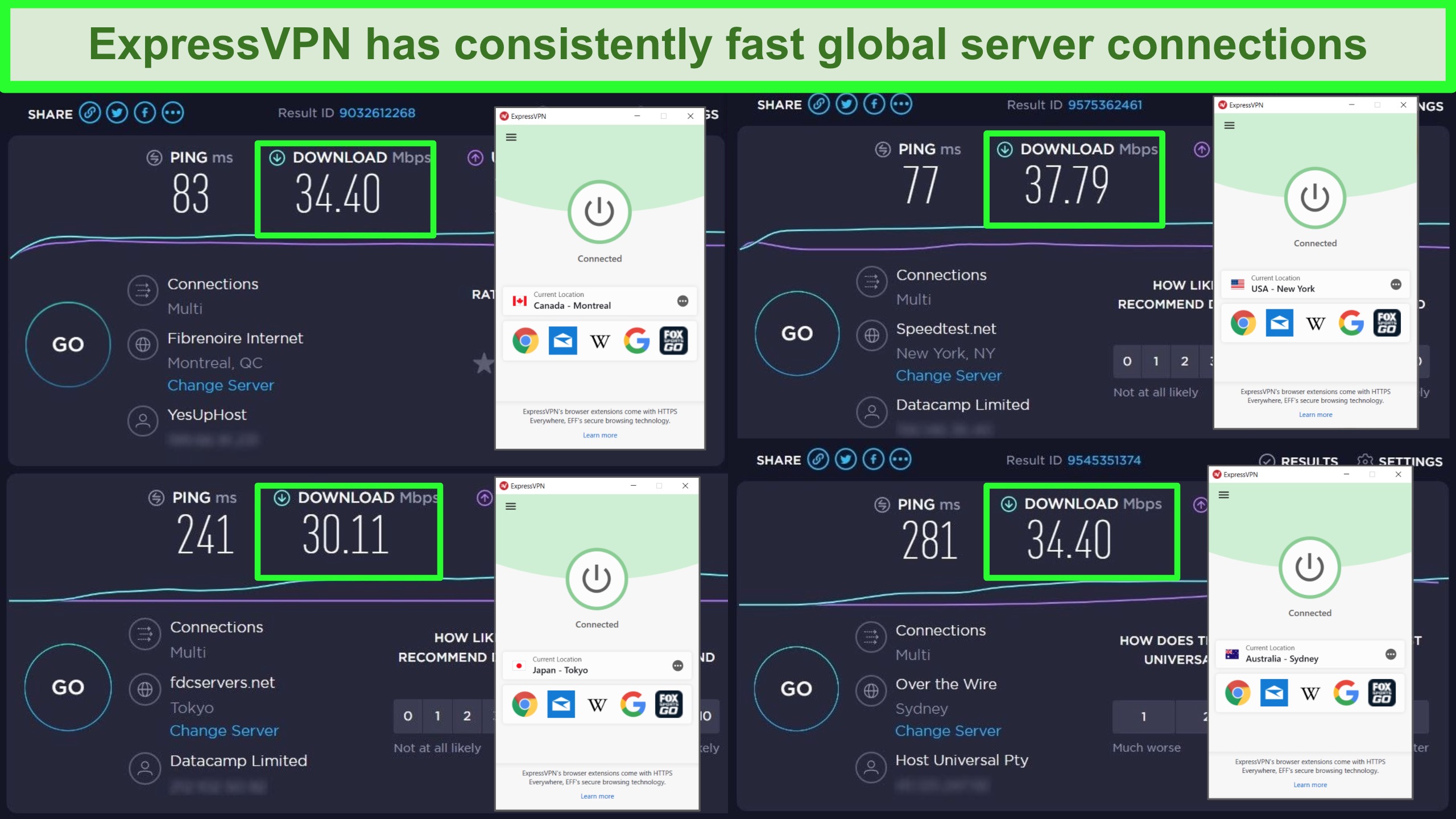 ExpressVPN’s servers are reliably fast at over 30Mbps

ExpressVPN has fast servers in every location where you can stream the UFC. Choosing a specific server location is simple as ExpressVPN’s app is extremely user-friendly. I just typed in the country I wanted to connect to and browsed through all server locations. Connecting is easy too — double-click on the server you want and ExpressVPN connects to the server in just a couple of seconds.

The desktop and mobile apps have the same interface, which I really like because it makes it easy to navigate between different devices. I found the ExpressVPN Windows app is especially useful as it has an app shortcuts bar. All I had to do was add the UFC Fight Pass app to the bar and click the icon before the fight started.

ExpressVPN is slightly more expensive than other VPN services but it provides fast connections, making it worth the price. If you’re not sure about subscribing to a plan and want to test it first, you can use ExpressVPN’s 30-day money-back guarantee. It’s a risk-free way to test the streaming speeds and features before you fully commit.

Getting a refund is easy too. I tested it by asking for a full refund through the 24/7 live chat after around 3 weeks. The “no questions asked” policy is true — there was no annoying troubleshooting or trying to get me to stay. The customer service agent quickly issued my refund and I had my money back in less than a week.

Get ExpressVPN now and watch UFC

Get ExpressVPN's Black Friday Deal! ExpressVPN has dropped prices for a limited time to a crazy $6.67 per month for the 1-year plan (you can save up to 49%)! This is a limited offer so be sure to grab it now before it's gone. See more information on this offer here.

NordVPN is another great choice for streaming live UFC matches due to its huge global network of servers. It has over 5,400 servers worldwide, including 1,800+ servers in the US, 450 servers in Canada, and 200+ servers in Australia. This vast number of servers ensures you’ll never need to compete with other users for server space, keeping your streaming speeds consistently fast.

During my tests, I quickly connected to servers in the US, Canada, and Australia — and each server took less than 5 seconds to encrypt my connection. Even better, I enjoyed a smooth streaming experience with very minimal buffering. I ran speed tests on 4 different servers in each location and my average speed was just over 30Mbps, which is fast enough to livestream UFC Fight Night in HD-quality.

Even the best VPN services sometimes struggle to bypass tough location restrictions and I did find that on a couple of occasions, NordVPN wasn’t able to connect me directly to the streaming services I wanted. However, switching servers is so quick so it took just a few seconds to get a working server. Once I found one, I saved it so that I could connect quickly in the future. I recommend finding a server that works with your subscription service in advance so you can start streaming as soon as UFC Fight Night starts. 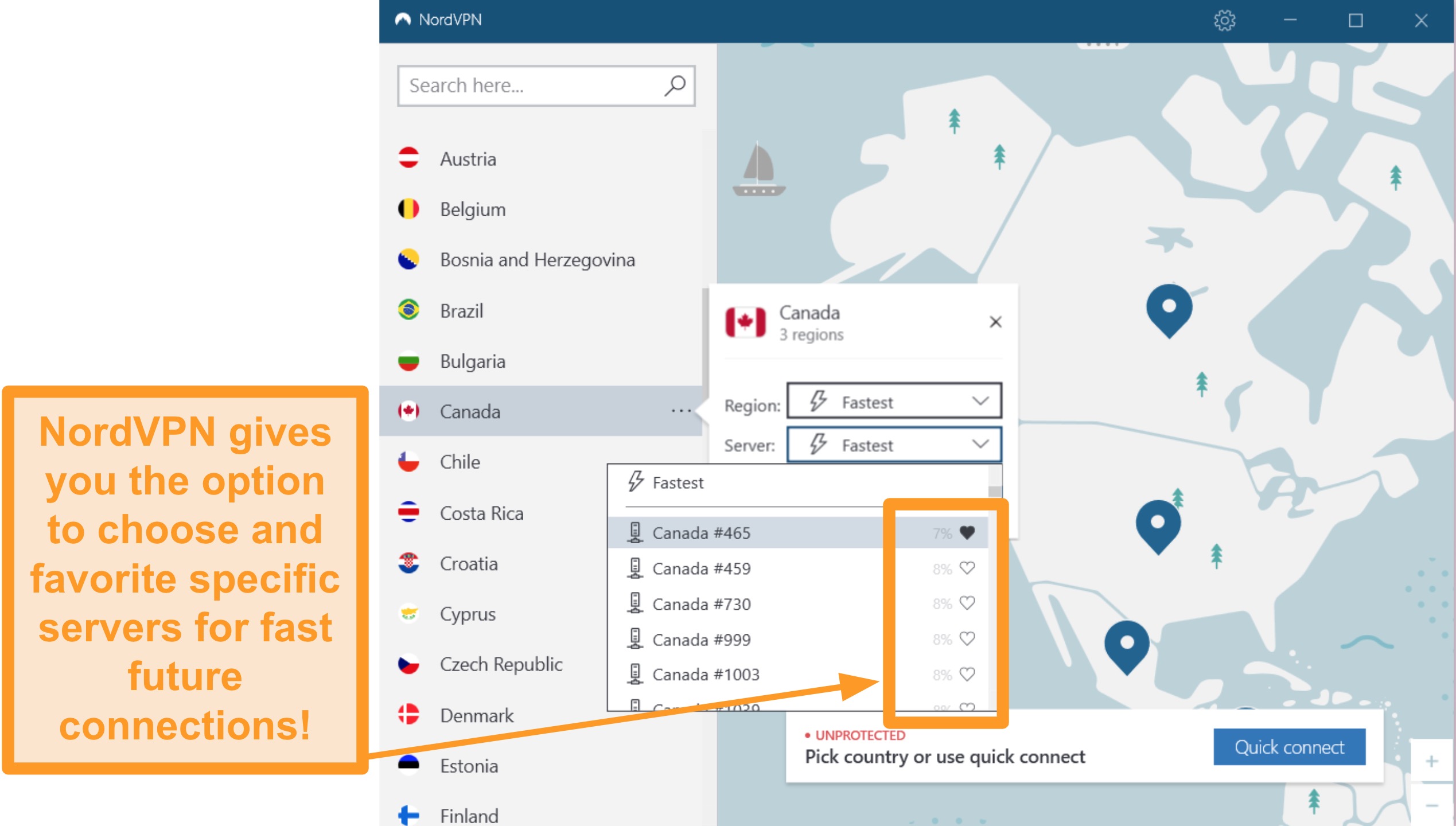 You can save NordVPN servers that work with your streaming service

NordVPN is more competitively priced and the longer your subscription, the better the deal you can get on a plan. NordVPN also has a 30-day money-back guarantee you can use to try it for yourself without any risk. If you change your mind later, it’s easy to contact the customer support team via live chat and request a refund.

Get NordVPN's Black Friday Deal! For a limited time only, save 68% with the 2-year plan + get an additional 3 months free! Hurry and check out the deal here!

CyberGhost is a solid option for watching UFC Fight Night, as it offers servers optimized for streaming sports. I streamed previous UFC fights on its optimized servers and I enjoyed minimal buffering, no connection errors, and high-quality resolution.

However, its dedicated sport streaming servers are only available in select countries, such as the US and UK. To stream the UFC in Australia, you’ll have to connect to a regular server. 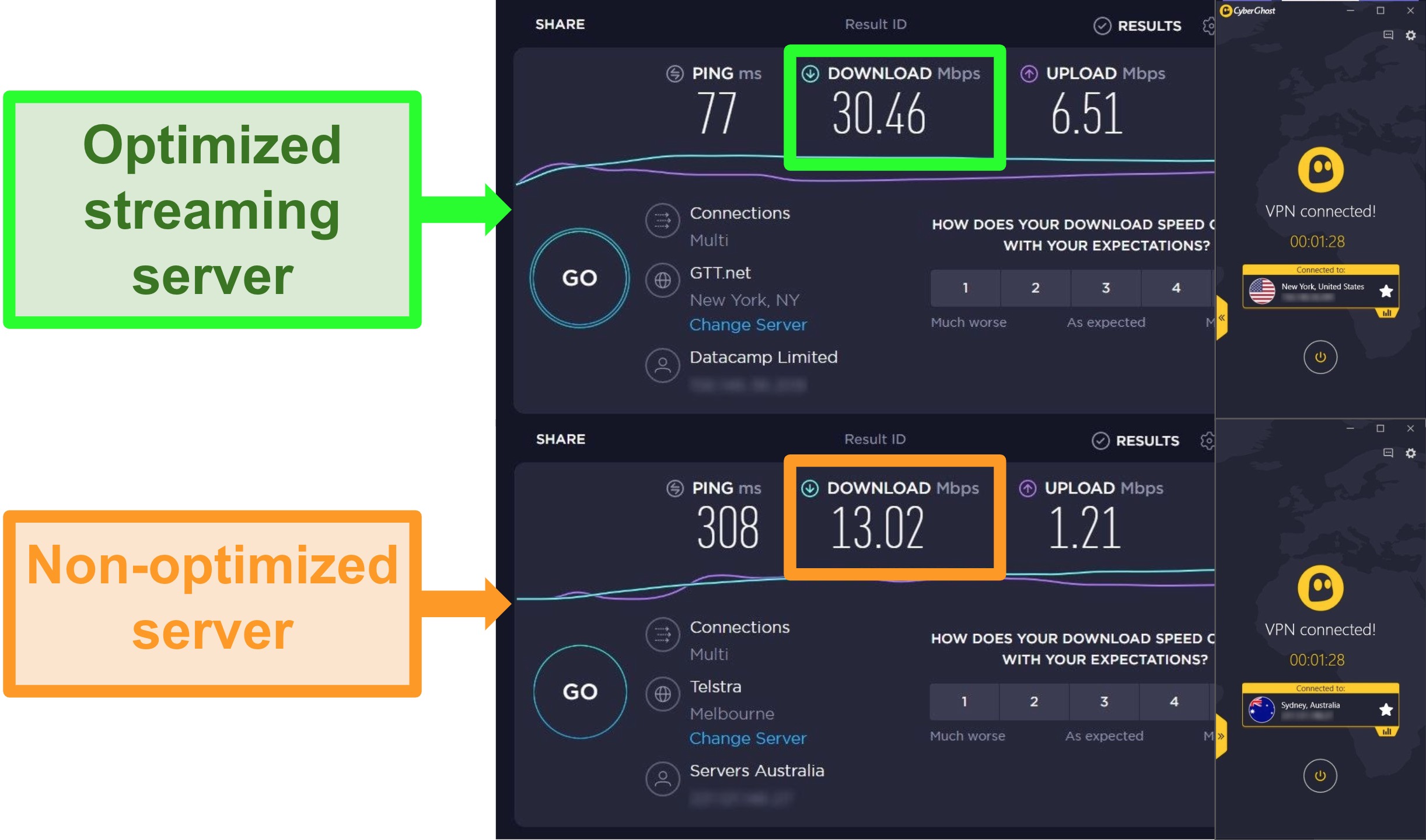 CyberGhost is the most affordable VPN on the list and it’s especially cost-effective if you choose a long-term subscription. You can try CyberGhost for over a month with its 45-day money-back guarantee. This is a long money-back guarantee for a premium VPN so I recommend you take full advantage of it.

November 2020 Black Friday Update: CyberGhost has dropped prices for a limited time to a crazy $2.25 per month + get an extra 3 months free with the 3-year plan (you can save up to 83%)! This is a limited offer so be sure to grab it now before it’s gone. See more information on this offer here.

Why You Need a VPN to Watch UFC Fight Night

Streaming UFC content without a VPN is difficult and potentially unsafe.

When you want to watch a UFC fight from outside of the streaming service area, you have the option of using an unlicensed stream. The problem is, unlicensed streams can be taken down at any moment (even in the middle of the fight!) and are often hosted on websites full of suspicious pop-up ads.

When you stream using a VPN, you get access to the official UFC streams — you’ll get uninterrupted access to every moment of the fight and won’t have to deal with potential malware threats.

Even better, using a VPN can get you a cheaper UFC subscription! Take a look at the price differences between getting a UFC Fight Pass in the US and Australia: 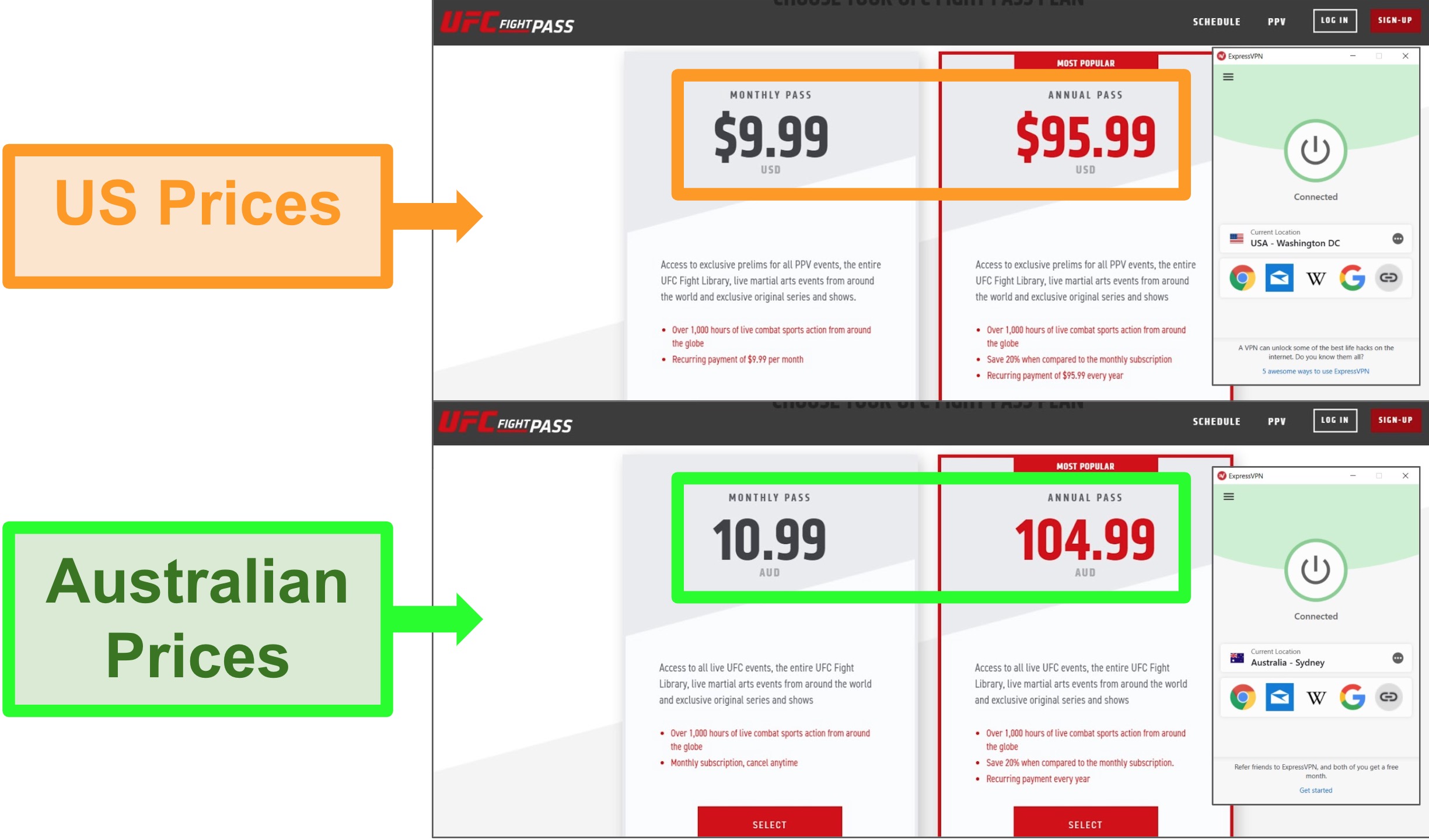 You can get a cheaper subscription by changing your location with a VPN!

By using a VPN to change my virtual location, I could buy an annual Fight Pass in Australia for $105 AUD — which is about $72 USD and almost 25% in savings! So not only do you get to watch UFC Fight Night in HD-quality with no interruptions, you also save yourself $20 just by using a VPN!

I’ve tested the best free VPNs available but none of them can livestream a full UFC fight in HD-quality.

Free VPNs simply don’t have the resources to provide a quality streaming experience, which is especially important for live sports events. During my tests, I experienced constant lagging and buffering — if the video even loaded. The trouble with even the best free VPNs is that they’re limited in terms of speed and data, usually to encourage you to upgrade to a paid service.

If you choose an unlimited free VPN, you should know they often sell your personal data to advertisers in order to earn revenue. This results in your device being targeted with endless pop-up ads and stops your online activity from being totally anonymous.

My advice is to download a quality VPN with a money-back guarantee. ExpressVPN has a 30-day money-back guarantee you can use to test the service out. Simply contact customer service before the 30-day period is over and your money will be refunded, no questions asked. It’s really easy — I did it and I got my money back in less than a week! 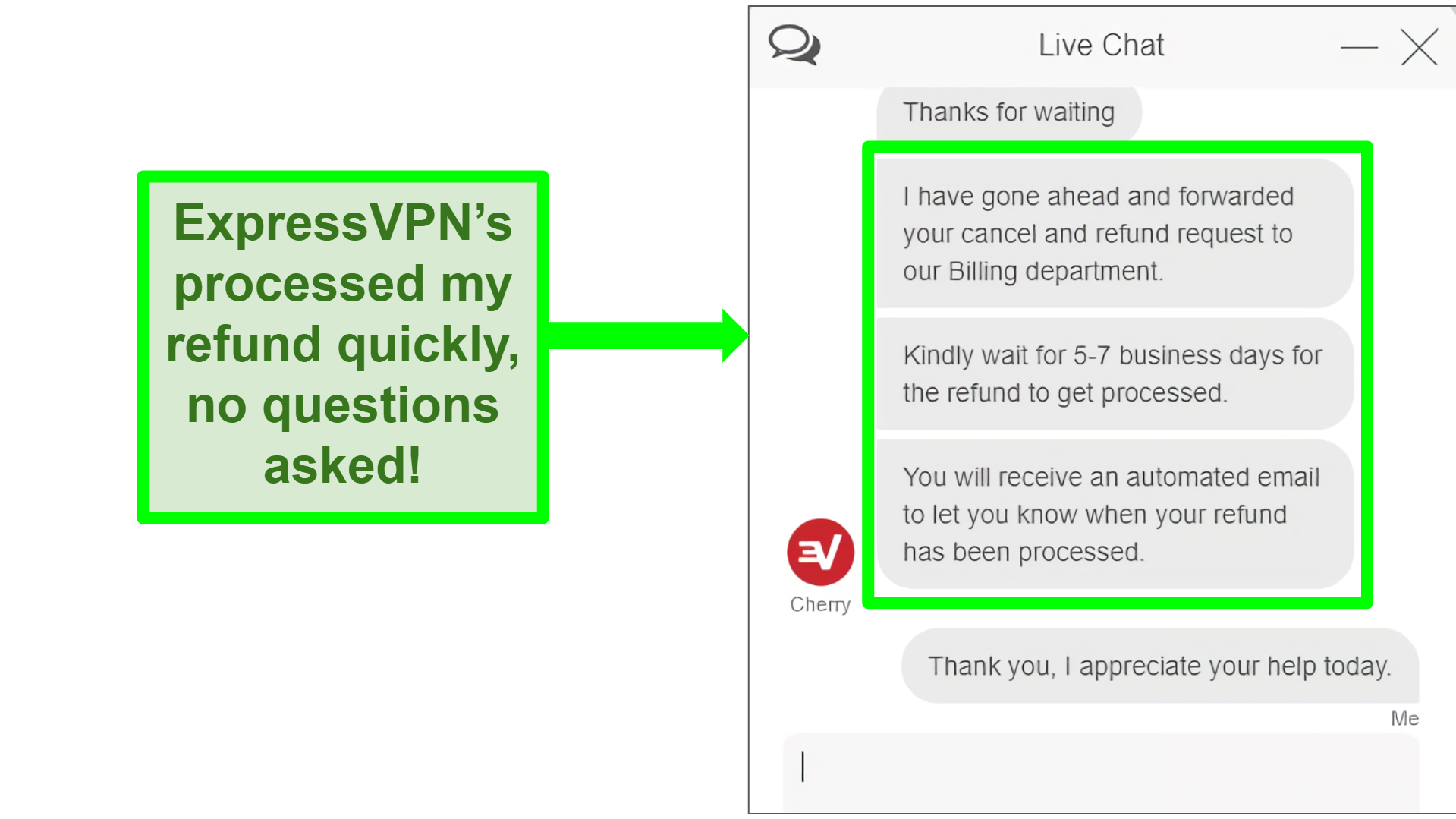 FAQs on the UFC

The best way to watch UFC Fight Night is to get a VPN that has proven to reliably unblock UFC content. Alongside a VPN, you can use any of the following streaming services to watch the fight:

❓How can I get a UFC fight pass?

Watch every UFC fight with ExpressVPN!

💰 Can I watch UFC Fight Night for free?

Not legally, no — UFC Fight Night and other matches are only available to view from licensed broadcasters. There are a lot of unlicensed websites that promise you can watch the whole fight for free and in great quality, but that’s just not the case.

Unlicensed sites sometimes only let you stream for a few seconds before demanding you sign up for an account, and some want you to download software to continue streaming! Who knows what kind of malware could be lurking in those downloads. It’s not safe for your device or your personal data to use an unlicensed UFC stream.

Just like you pay for streaming services like Netflix and Disney+, your best option is to subscribe to a service that gives you legal access to UFC fights. While it may seem expensive, remember you can use a VPN like ExpressVPN to get cheaper plan options (and you can use ExpressVPN for 30 days with its money-back guarantee too!)

Start Watching the UFC from Anywhere With a VPN

Every second counts in a UFC match and you don’t want to miss a single kick, jab, or takedown! You can see every moment of the fight in HD-video quality with a reliable VPN, no matter where you are in the world.

For the most consistently fast connections and strong encryption that hides your location, I recommend ExpressVPN. With ExpressVPN, you don’t have to worry about lag or buffering at the crucial knockdown moment — and you can use it to watch other live sporting events too, like the Super Bowl, English Premier League, World Rugby Championship, and more!

Don’t take my word for it though — try ExpressVPN for yourself risk-free by using its money-back guarantee. Stream UFC Fight Night and use it as much as you want for 30 days — then get a full refund, no questions asked! 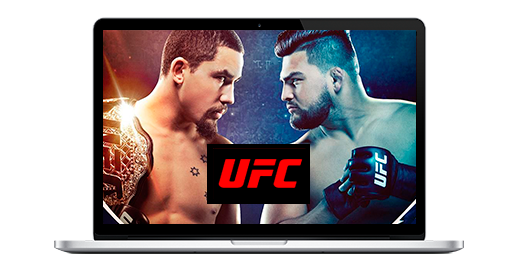