Craving Your SBS TV Fix Outside of Korea? This Workaround Can Answer Your Prayers!

If you’ve lived in South Korea your whole life or even spent just a few months there on a business trip, odds are you’re a big fan of Seoul Broadcasting System (SBS) TV. SBS just reached its 28th anniversary as a network and delivers great regional channels like KNN, TJB, TBC, and KBC. 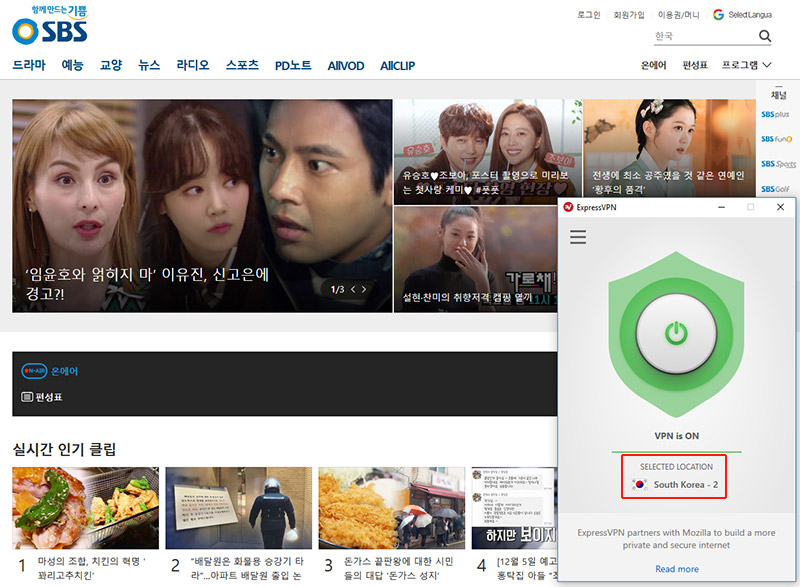 The worst thing about SBS TV is that it’s only available in South Korea. That’s not good news for the more than 7.4 million South Koreans living abroad – mostly in China or the US. SBS TV’s website is geolocked, meaning it has sensors in place to tell it if you are trying to access its services from outside South Korea.

Anyone attempting to stream SBS TV programs from outside Korea will be met with a warning message and be unable to proceed.

The tried and true solution for this conundrum is to use a virtual private network (VPN) to get around the block and enjoy SBS TV regardless of where you are physically located.

A VPN is a client-based app that allows your computer to establish a secure connection with a computer located in another country. VPN companies have vast networks of remote servers running in different countries that prove advantageous to users. The VPN opens a encrypted “tunnel” between your computer and the remote through which data, requests, and downloads can pass through without any third party, such as your Internet Service Provider (ISP) being able to identify it.

It passes back through the “tunnel” to your end, where it is finally decrypted and you are able to watch your favorite shows regardless if you’re in London, New York City, Moscow, or Johannesburg.

How do I use a VPN to watch SBS TV?

What are the best VPNs for watching SBS TV?

When it comes to high speed VPNs, most experts agree that ExpressVPN is a top choice. Its has ultra-fast servers in 94 different countries and offers unlimited server switches and unlimited bandwidth. Its high price is the company’s most-cited negative.

NordVPN has fast speeds as well, plus great customer service and a booming 4,400 servers spread across 60 countries. Nord VPN is one of the companies that has routinely been able to provide ways around the blocks put in place by US’ Netflix service, which has one of the toughest security systems.

A third option is IPVanish VPN , which has more than 1,000 servers in 60 countries. IPVanish has diversified recently, with available clients for macOS, iOs, Android, and Amazon Fire TV.