Have you ever tried to watch the latest sports game on DAZN and received this annoying error message?

DAZN ISN’T AVAILABLE IN THIS COUNTRY.

Existing DAZN customers can only access DAZN from their home country or whilst visiting countries within the European Union.

If you are seeing this in a location where you can usually watch DAZN, or you’d like to request DAZN in your country, then contact Customer Support.

You’re not the only one. DAZN is geo-restricted to the US, Canada, Germany, Austria, Switzerland, Italy, Spain, Japan, and Brazil. Even if you have DAZN in your country, you’d have to change your IP address to be able to watch games that are broadcasted in other countries.

I’ve used VPNs to unblock global content easily while testing many other streaming platforms like Netflix and Hulu. But DAZN has one of the strongest VPN-detection abilities I’ve come across — and most VPNs are not able to unblock it.

Even the mighty NordVPN has only recently started to work with DAZN after previously failing to unblock the site. Out of the dozens of VPNs I’ve tested, only 4 have proved to successfully stream sports on DAZN.

Try NordVPN for DAZN for free!

Not All VPNs Unblock DAZN — Here Are the Ones That Do

As of now, NordVPN, ExpressVPN, Surfshark, and PrivateVPN are the only VPNs that can bypass DAZN’s strict geo-restrictions — to a certain degree. No single VPN can yet access all of DAZN’s content, and each provider can only unblock DAZN from country-specific servers.

To save you time, I tested these VPNs and even checked with their customer support teams to show you exactly which VPNs and servers to use to access your favorite games. All these recommended VPNs come with a 30-day money-back guarantee so you can test them out for yourself risk-free before buying.

How to Watch Sports on DAZN Canada 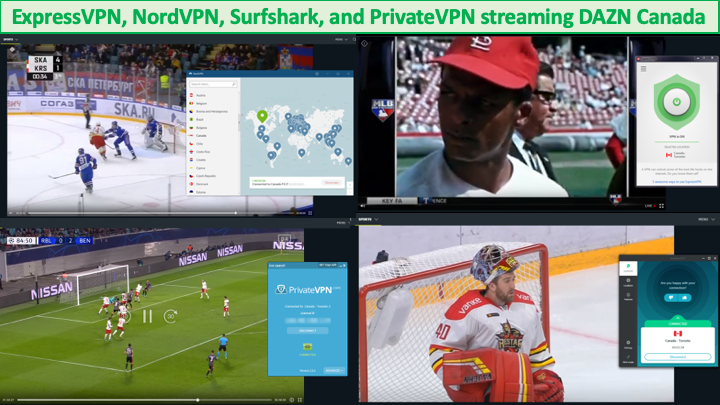 All recommended VPNs in this list successfully stream DAZN Canada

Other VPNs that unblock DAZN Canada: ExpressVPN, Surfshark, and PrivateVPN

NordVPN’s Canadian Quick Connect server gave me access to DAZN instantly and I didn’t have to waste time looking for a working server. The picture quality was sharp and there was really minimal buffering required so you don’t have to worry about missing any sports action.

With ExpressVPN, I could conveniently stream from DAZN Canada on all its Canadian servers. This provided me with access to every live NFL game, as well as Premier League, Bellator, and MLB. The video streaming quality was great and I didn’t experience any lags. You can expect a top-notch streaming experience with this VPN.

Surfshark’s Toronto server connected me to DAZN Canada instantly and I had good quality streams. The Montreal server was a little less reliable — I could access the content but the streaming quality was blurry and poor. With Surfshark, you should try a few different servers to see which one gives you the best picture quality. 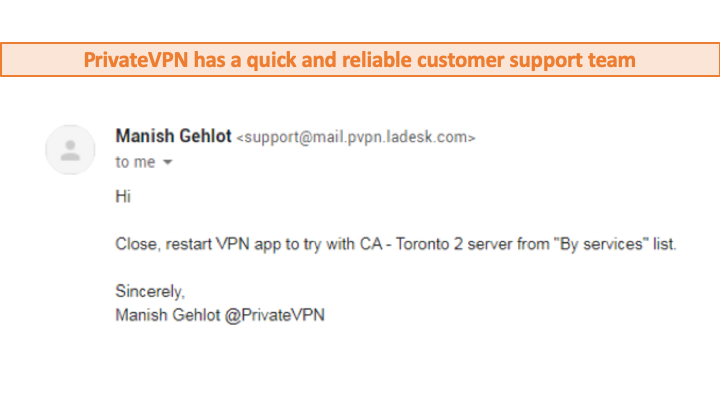 PrivateVPN’s customer support was fast and the recommendations worked

I did have some trouble connecting with PrivateVPN, but their customer support representative responded within a few minutes with a solution. I followed their instructions and the recommended CA-Toronto 2 server worked!

Out of all the VPNs I tested, only PrivateVPN was able to successfully stream DAZN US. PrivateVPN provides a dedicated DAZN server, so you don’t need to manually select a US server. You’ll be able to stream all US sports games, including the World Boxing Super Series Bantamweight, Cruiserweight, and Super Lightweight tournaments, plus exclusive fight nights.

I did have some trouble connecting to PrivateVPN’s dedicated DAZN US servers, but the customer support team were quick to offer alternatives. I was able to stream using their recommended New York 4 server with no further issues. If you ever face connection problems, you can definitely count on PrivateVPN’s support team to solve them for you.

NordVPN’s website states that it can access DAZN US, but I was unsuccessful with the servers I tried. I sent a query to ask for server recommendations, but NordVPN’s customer support didn’t reply so I can’t recommend it for DAZN US.

How to Watch Games on DAZN Italy 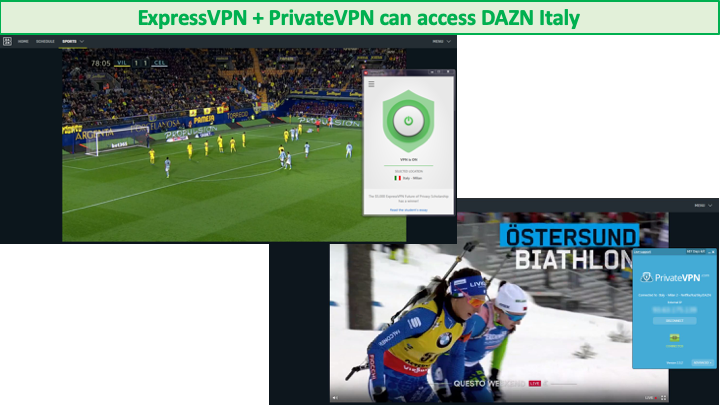 Both ExpressVPN and PrivateVPN could access DAZN Italy. I was able to connect within seconds and streamed with minimal buffering. I personally prefer ExpressVPN because it consistently outperforms other VPNs in speed tests.

How to Watch Sports on DAZN Spain

Surfshark is currently the only VPN that allows you to watch sports like MotoGP, Premier League, and Euroleague on DAZN Spain. I was previously able to watch DAZN Spain using ExpressVPN’s Barcelona server, but after my latest round of testing, I’ve found that it no longer works.

Surfshark is one of the most affordable VPNs I’ve tested, and it also offers premium features you wouldn’t normally get for that price. You can test it out for yourself using the 30-day money-back guarantee.

How to Stream DAZN Germany Sports

All of ExpressVPN’s German servers worked during the time of my testing. DAZN Germany will give you access to Bundesliga, Champions League, Europa League, NBA, NFL, UFC, darts, and tennis.

It was easy to access DAZN Japan with NordVPN. The Quick Connect Japan server worked straight away and I could stream Bellator within a few seconds. You can also watch the NFL, MLB, Formula One, NPB, and most major football tournaments around the world (except Premeira Liga, Indian Super League, and the MLS) with DAZN Japan.

Quick Summary of the Best VPNs for Streaming DAZN

Each VPN can only unblock certain DAZN sites. You may need a combination of VPNs if you want to access all DAZN content. Luckily, they all come with money-back guarantees so you can test them out risk-free before buying.

Even if you have an existing DAZN account, you won’t be able to watch your favorite games if you travel outside of your home country. DAZN blocks you if it sees that you are streaming from outside its limited countries.

Additionally, DAZN’s sports content is restricted based on each country — so if you live in Germany, you won’t be able to watch American boxing matches.

A VPN can change your location to make DAZN think you’re within its permitted countries, which gives you access to all the DAZN content you want. You can be physically based in Germany (or wherever, really), but as long as your VPN location is set to a particular DAZN country, you’ll be able to access that country’s sports streams.

Don’t get me wrong — I love free VPNs. I even created a list of my favorite free VPNs that are reliable and secure, but none of them work with DAZN.

Free VPNs don’t have as many resources to invest in their product. As a result, many of them don’t work and they may come with annoying ads that ruin your streaming experience. Some may even pose a real risk to you as they sell your data to third parties for revenue.

My advice is to avoid trying to use a free VPN to unblock DAZN. To save yourself the trouble I went through, use one of the recommended VPNs on this list that has been proven to work with DAZN.

Don’t give up. Like all streaming sites, DAZN works hard to block VPNs from accessing its content. But premium VPN services like NordVPN and ExpressVPN are constantly improving their technology to avoid detection. It’s an ongoing battle and the winners change from time to time.

Keep asking your VPN provider for updated lists of recommended servers, and check to see if DAZN adds any new countries to its service. You can also bookmark this page to get updates and new VPN test results.

You should also keep in mind that whilst DAZN is a fantastic sports streaming platform — it’s not your only option. If you still can’t unblock DAZN with my tips, check out the top 5 DAZN alternatives for watching sports online!