It’s time for Season 17 of the Voice!

There are some changes at the judges table with Adam Levine leaving the shows after 16 wonderful season. Pop superstar Gwen Stefani will join Blake Shelton, Kelly Clarkston, and John Legend in judging this years contestants.

If you aren’t in the US you may have a hard time streaming episodes due to NBC geo blocking tactics. Don’t worry, we have the solutions so you’ll never miss a moment of the chair-turning, talent-filled action again!

Watch The Voice for Free on NBC.com in 4 Steps

NBC makes new episodes of their big shows available for free on NBC.com the morning after it airs on TV until the next episodes airs. Unfortunately, streaming shows on the website is restricted to viewers from within the US. Using a VPN will easily allow you to bypass this block and watch The Voice in 4 simple steps.

Watch How I Bypassed the NBC Geo-Block

As you can see if the video above, we connected to a US server using ExpressVPN and had no trouble streaming a show without signing in. We had to use America’s Got Talent as the example since there are no new episodes of The Voice out yet.

If you really want to watch The Voice live there are three options: Sling TV, Hulu with Live TV, and DirecTV NOW. All three have package that include NBC and paired with a VPN will allow you to watch the episodes live.

The Best VPNs To Use to Watch The Voice Online

To watch The Voice online from anywhere outside the United States, you need to be able to access them from outside the US. This means that you will need a VPN as these Internet TV services have geo-blocks if you are not located in the USA.

The following VPNs are excellent for bypassing geo-blocks. Plus, they offer privacy and security features to keep you safe when you are streaming The Voice and your other favorite TV shows online. All of these VPNs have servers in the US, allowing you to access all of the above options. 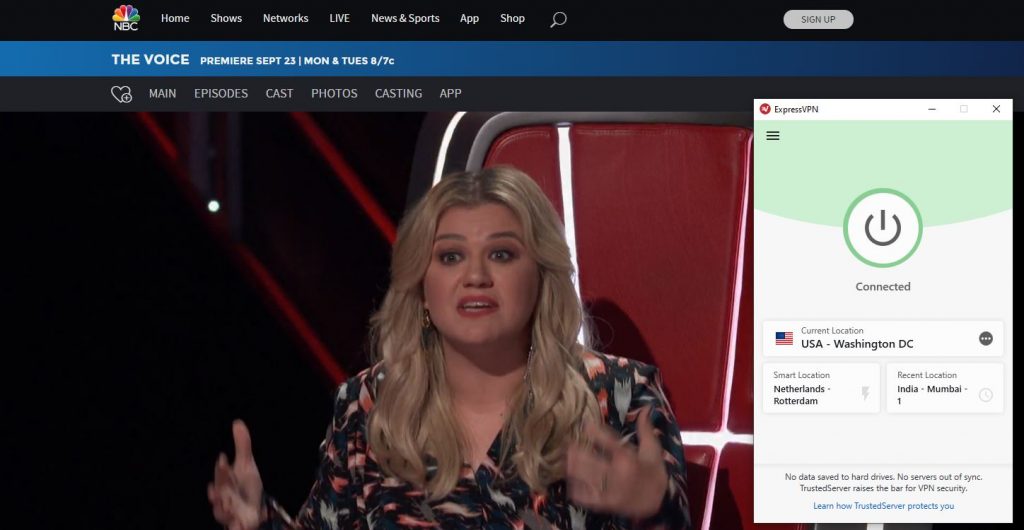 ExpressVPN is often considered the best VPN on the market thanks to its connection speeds, access, reliability, and security. It has 256-bit encryption and a strict no-logs policy that keeps your identity and data safe, secure, and anonymous when you are streaming The Voice online. Not to mention, ExpressVPN gives you unlimited bandwidth, and it does not throttle your line. This makes it ideal for streaming. Plus, ExpressVPN has 24/7 customer care that always gives you fast responses.

2. NordVPN – Thousands of US servers

NordVPN allows you to use up to 6 devices at the same time. It is simple to use and has brilliant security features such as a kill switch, a firm no-logs policy, a good privacy policy, and DNS leak protection. NordVPN has servers in over 60 countries, and it also has fast connection speeds that make NordVPN an excellent choice for streaming The Voice online

CyberGhost has long been regarded as a provider of stable, fast, reliable connections that are safe and easy to use. CyberGhost offers 256-bit encryption that protects your data and identity, offering you anonymity when streaming The Voice online. CyberGhost has servers in 50 countries, and it has a strict privacy policy and fast customer care.

No matter what device you use or which service you pick from our list, you can rest assured knowing that these VPNs are excellent options to use with Internet TV streaming services. All of the above options will allow you to watch The Voice online from anywhere around the world in just a few minutes for less than what a cable subscription will cost you. Not to mention you get more variety and options. So what are you waiting for? Don’t miss another chair turn, go get yourself signed up today!