Learning English is difficult, but Netflix can make it fun! With so many options to choose from, it’s hard to know which show to start with. Fortunately, I’ve made a list of the 8 best series on Netflix to learn English.

I’ve included British and American TV series with different levels of English difficulty. All of my choices were filmed in the last few decades and use contemporary language. You can try speaking in old English, but you’d get weird looks.

I’ve included a few sitcoms (situational comedies), documentaries, and dramas with simple and modern language. Additionally, most of these series were nominated or won awards. This is another good reason to keep watching and learning!

Learn English With These Netflix Series

Friends is a well-known 90s sitcom about 6 best friends living in New York. You’ll be cheering on each character as they live and grow together through challenges in their 20s and 30s.

The language is simple, clear, and modern. In fact, the German manager of the Premier League Liverpool soccer team, Jürgen Klopp credits Friends for teaching him English. He says that the show uses “easy conversation” that’s simple to follow.

Watching Friends is a great way to learn idioms or expressions, but you can still understand the show without knowing them. With 10 seasons available, you have a huge amount of learning material!

Black Mirror is a modern series that explores the dark side of society with technological innovation. The series won several Emmys for Outstanding Television Movie. Every episode is an independent story about a different issue, including social media, AI, drones, and brain implants.

Bandersnatch is one of the most well-known episodes. It’s about a programmer who creates a video game based on a mad man’s fantasy novel. The episode is interactive and you can select choices to change the outcome of the story. This is a great way to be involved in the storyline and learn more vocabulary from a variety of different scenarios.

Black Mirror has had celebrities Andrew Scott, Letitia Wright, Miley Cyrus, and Topher Grace starring in episodes. Although the plot is intended to be confusing, it’s easy to understand the characters’ dialogue. If the vocabulary for an episode is too challenging, you can skip to the next episode without missing out.

BoJack Horseman is one of my favorite shows, but it has a strange plot. The main character is a horse named BoJack, who’s a former movie star looking for happiness.

While it has many laugh-out-loud moments, the main themes of the animated show are intense. The show skillfully discusses issues about fame, drug use, failed relationships, and depression. Its contemporary topics will give you a large pool of vocabulary to learn from.

The witty humor involves a higher level of English comprehension. The writers often use rhymes and tongue twisters, which can be difficult for English learners to understand. However, you can still understand the plot without knowing the wordplay.

This series is an Emmy nominee for Outstanding Animated Program.

Breaking Bad is about chemistry teacher Walter White producing meth to fund his expensive medical care for his terminal illness. He partners with his former student, Jesse, and the two enter the local drug scene with their pure drugs. Walter struggles to hide his secret criminal life from others.

The series won Emmys and Golden Globes for Outstanding Drama and Best Drama Series. Actors Bryan Cranston and Aaron Paul are exceptional in their lead roles and have won Emmys for Outstanding Actor. Their pronunciation is clear and the language is modern. The dialogue varies from simple discussions to complex scientific and business talk.

If you love high-intensity shows with fantastic dialogue, Breaking Bad is a great pick.

It takes place in the 99th precinct in Brooklyn and includes a diverse cast of detectives. The main character Jake Peralta is a great detective whose never-ending jokes often get him in trouble. The others are a combination of strange, wild, too serious, or lazy detectives. The series won two Golden Globes for Best TV Series and Best Performance.

The characters speak clearly and the language is generally easy to understand. With subtitles turned on, you shouldn’t have any issues understanding the puns and idioms.

Explained is the first informational TV show on this list. Each episode focuses on a different topic, including diseases, drugs, coding, cults, and the stock market. Each subject is divided into brief 20-minute episodes and includes interviews from experts in each field.

Due to the range of diverse subjects, the vocabulary can be challenging. However, this is a fantastic series for expanding your vocabulary and learning about specific topics. Most episodes provide simple explanations for complex topics, so anyone with a basic level of English can understand.

While Explained is the main series, the spin-off series The Mind, Explained and Sex, Explained further explore these sub-topics.

How I Met Your Mother

How I Met Your Mother is about Ted Mosby’s comical retelling of how he met the mother of his children. The series involves the adventures of Ted and his friends in New York, who have complicated and interconnected romantic lives.

The cast is a group of quirky characters, who speak clearly and use modern vocabulary. In fact, the show provided inspiration for many words and phrases that became internet memes.

Our Planet is a nature documentary about Earth’s diverse natural habitats. Each episode focuses on a different environment, such as jungles and the open ocean. This beautifully directed series won an Emmy!

The show is easy to follow and uses simple language. David Attenborough’s beautiful and clear narration also won an Emmy for the series. Our Planet offers a fantastic opportunity to increase your nature vocabulary.

The show also frequently discusses humanity’s impact on nature, including how climate change is affecting the natural world. The show gives insight about the effects of this important topic in our society.

Start Short and Build up

I recommend that you start with shorter episodes, such as one of the sitcoms on this list. This allows you to gradually build your vocabulary and listening comprehension. Then, you can watch longer episodes with more difficult language as your vocabulary improves.

Select Subtitles Based on Your Level

Use a Language Learning App

Language Learning with Netflix is a Chrome extension that streams Netflix while displaying two subtitles in different languages at the same time. This is helpful if Netflix offers your language as a subtitle option.

You can slow the playback and auto-pause after every line if you need to read at a slower pace. Additionally, you can open the episode’s script next to the video and choose specific sentences to skip ahead. You can also find quick translations by clicking on individual words. 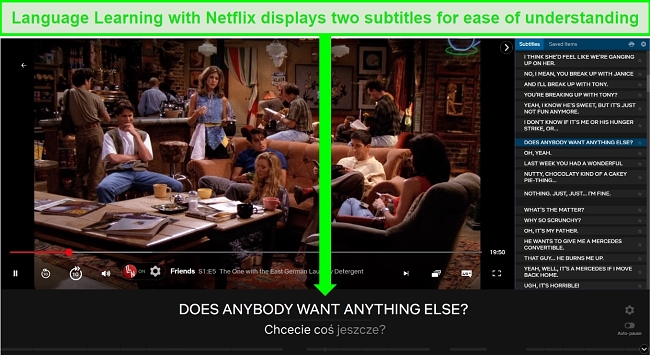 Binge Watching Could Help You!

Immersion makes a huge difference in learning a new language. Being exposed to as much of the language as possible will help you understand the accents and learn more vocabulary. You have a great excuse to watch hours of your favorite English-language show!

After watching, you can test your comprehension by discussing the show with others. With fan groups all over the world, you have several options to practice speaking. You can look for a language exchange group to discuss TV shows in English. If you’re attending English classes, this could also be a good opportunity to discuss the shows that you’ve watched.

If you’re unable to meet in person, you can search for an online forum to discuss the show with others. You can start a Reddit post to discuss a show, such as Friends and Breaking Bad. You can also practice your writing skills by participating in relevant forums or threads.

While this isn’t a language-learning tip, this will allow you to find the shows you want to watch. A VPN will allow you to connect to different Netflix regions to stream shows that aren’t available in your local area. Simply subscribe to a VPN, connect to a region where your chosen show is available, and start watching!

Have Fun and Learn English With Netflix!

Netflix is the perfect language teacher with hours of fun and educational content at varying levels of difficulty. If there’s anything you don’t understand, you can always rewatch the scene or episode without any limits. With so many shows available on Netflix, you’ll have plenty of learning material.

Many Netflix shows offer insight of native English conversations at normal conversational speeds, modern vocabulary, and different accents. This allows you to see how various English-language cultures interact, while improving your listening comprehension. In summary, Netflix is the perfect English teacher — educational while providing memorable scenes to help you remember new words!

All you have to do is pick a show and start learning! 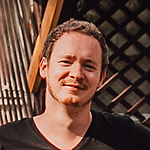 Written By Lucca RF
Lucca is a tech writer with a focus on cyber security, cryptocurrency, and logistics. He has been researching government overreach via digital surveillance for several years now, and his interest in VPNs and online safety goes hand-in-hand with this.
This Article contains
Latest articles
Share & Support