Today, there are plenty of reports from users saying that they can’t access Netflix using the HMA VPN. We tested it with mixed results. One day we were able to access US Netflix and the next we got a Proxy Error.

After several days of testing in the US and other markets, we can’t recommend HMA as a viable Netflix VPN.

If you already have HMA and are having problems with Netflix, there are alternative ways to find the content you want:

HMA VPN isn’t a great solution when it comes to unblocking US Netflix. In fact, we tested various servers and couldn’t access the streaming channel with any of them.

However, Netflix doesn’t block HMA in all locations. By connecting to a UK server, we could access the region’s Netflix without any trouble whatsoever. So all is not lost unless you specifically want to access the US catalog.

With more than 280 different server locations, HMA is a great VPN for global coverage. However, while the service connects to servers quickly, it will remain inconsistent when it comes to accessing Netflix, specifically in the US. With this in mind, we recommend you try an alternative source for content. 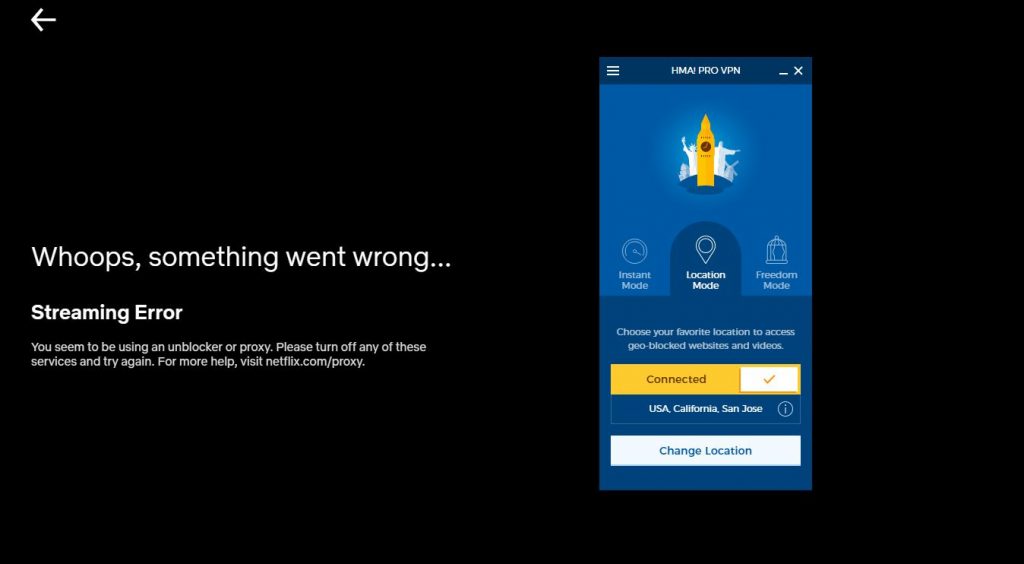 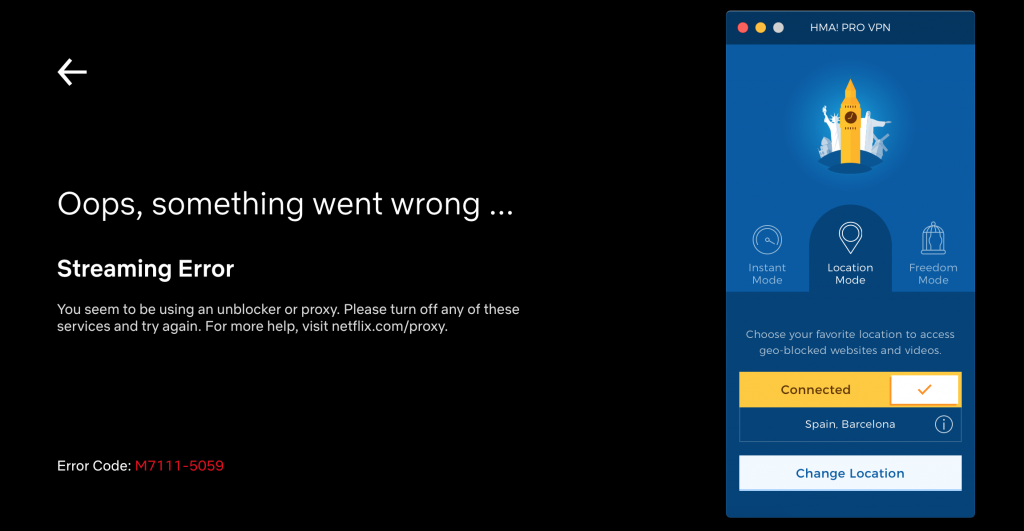 We had the same results when tried with Spanish servers

We did stream Netflix UK with HMA

What Should You Do When You Can’t Access Netflix With HMA VPN?

While Wizcase doesn’t condone pirating content, torrenting websites do often give you access to a vast variety of TV shows, movies, and various other media. However, torrenting isn’t without risks.

The likelihood is the copyright owner of the available content hasn’t given their permission for it to be hosted or shared online. With this in mind, there could be repercussions. ISPs can block access to specific sites, and you can receive a fine or even face jail time.

Taking that into consideration, it’s essential that you use a VPN when using P2P websites and software. Furthermore, a VPN can also provide better security against the more malicious elements that exist among file sharing, as it is a hotbed of malware and data theft.

There are some other excellent, popular streaming currently available. Apart from Netflix originals, you can find some of the same content, and you might even find something new.

Many of these streaming websites aren’t equipped with the same VPN blocking technology, thus making it easier for you to access geo-restricted content.

3. Use a Different VPN

If HMA doesn’t do the trick, there are plenty of other VPNs available for you to try. While HMA is a great service, others currently available come with a much broader selection of servers.

Furthermore, these all come with a free trial, or a money back guarantee period, so you don’t have to make the financial investment to check if they work.

If you want to try an alternative to HMA to bypass Netflix geo-restrictions, we recommend the following services:

ExpressVPN is known for its blazing fast speeds and strong encryption. The service allows you to unblock Netflix in the US and various other locations across 3,000+ secure servers.

NordVPN has the largest selection of servers in the industry. The global server network is excellent for unblocking streaming services with playback enhanced with SmartPlay.

3CyberGhost VPN – Has US servers optimized for Netflix

CyberGhost VPN is another popular VPN that allows you to unblock Netflix in a variety of countries thanks to its comprehensive forum that will tell you exactly which servers are optimized for streaming.

While Netflix is becoming more sophisticated at identifying VNPs and blocking them, companies like HMA are always acquiring new servers at an greater rate to combat the issue, thus allowing you to bypass these blocks.

That said, if you can’t find a HMA server that allows you to watch Netflix in your preferred region, ExpressVPN, NordVPN, and CyberGhost VPN are all far more consistent at delivering results.